A Frightened Hound Meets Demons Underground is episode #10 of the Scooby-Doo Show and originally aired on November 13, 1976.

This episode takes place in Seattle near the Space Needle, where the gang discovers an underground city crawling with ancient demons.  For a bit of Trivia, the Rambling ghost makes an appearance a few weeks before his episode of The Ghost that Sacked the Quarterback.  We also get some cool statues of the Werewolf from Who’s Afraid of the Big Bad Werewolf, and the Witch from Which Witch is Which.  There’s also a dragon statue, a samurai skull and a weird creature statue named Avigo who unfortunately never turns up in a Scooby episode again.

The episode begins on a construction site, where two men are working.  Behind one of the construction workers (named Joe), a demon emerges from a cloud of pink smoke and raises his arms to attack Joe.  Fortunately, Joe is able to ride off to safety on a metal beam controlled by a crane, but not before the demon strikes the beam with his hand, leaving a burning claw mark as evidence of his supernatural powers. 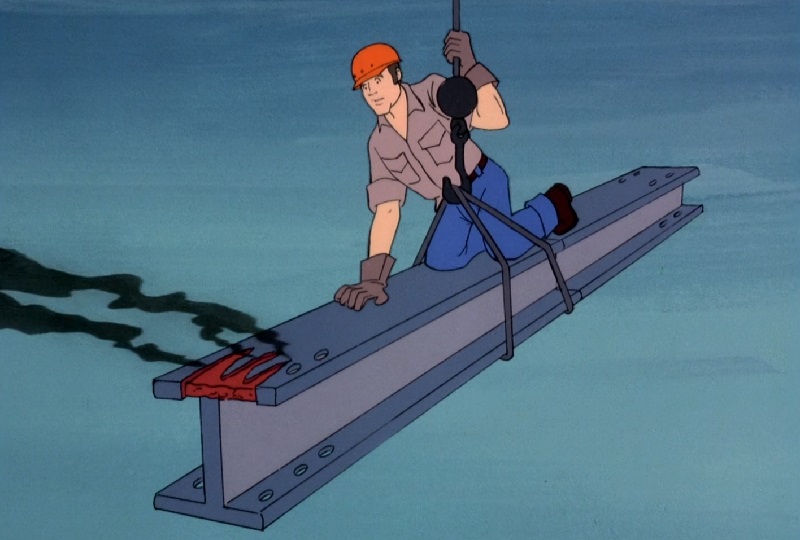 Meanwhile, at the Seattle Space Needle, the gang is enjoying an afternoon lunch (Scooby has the lobster).  While waiting for their food to arrive, Velma reads out loud to the gang about the construction site incident we just saw. In the newspaper article, it explains the demons are living in old Seattle. Velma explains that there is an underground Seattle, which had burnt down in 1890, and new Seattle was built on top of it.  They learn that it’s the 5th sighting of the demon, so they decide to visit the construction site and see if they can solve this mystery. 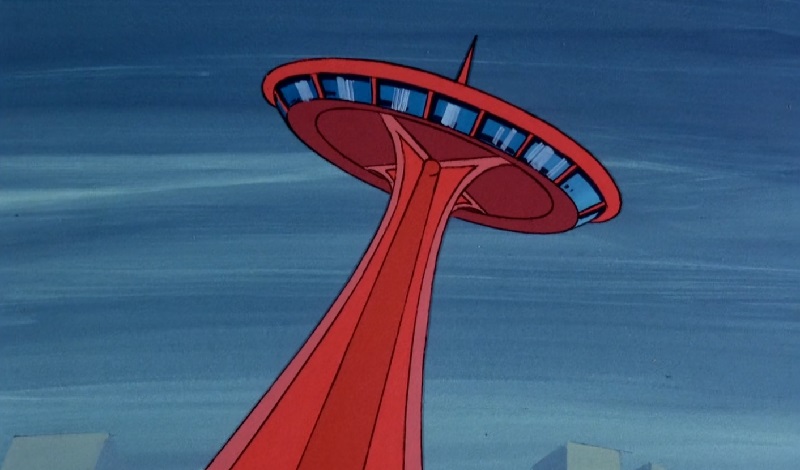 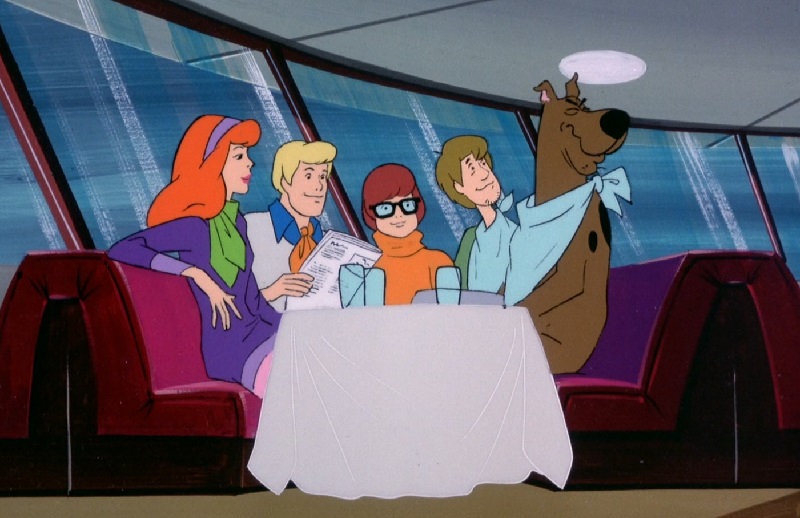 The gang meet Sam Crenshaw, owner of the Crenshaw Construction Company Limited, at his office.  The office had just been recently broken into, and burnt demon claw marks pepper the walls.  Mr. Crenshaw explains that the demons took everything, including his company funds.

Mr. Crenshaw is convinced that the demons were after an ancient talisman that he shows the gang.  He says the talisman has the power to drive the demons back underground. 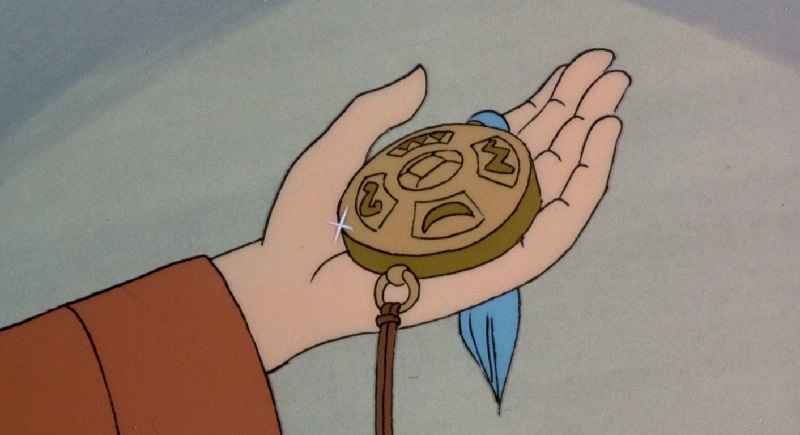 Mr. Crenshaw also explains that in 1860, the ground in Seattle opened up, and a demonic pair of arms reached up towards the sunlight.  Suddenly there was a release of sulphurous pink smoke and several demons emerged that plagued Seattle for years until a strange man appeared with the talisman.  The man claimed the talisman used black magic, which he was able to harness, to drive the demons back underground.  The hole was then sealed with an enormous iron lid, so the demons would never escape again. 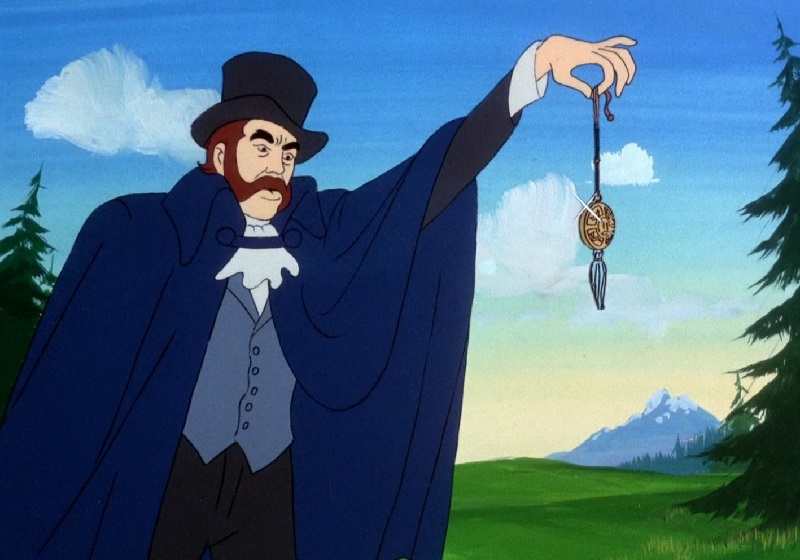 Mr. Crenshaw, while building a new shopping centre, came across that very iron lid and opened it, releasing the demons.  Plaguing his construction site, they left their burning claw marks across the site.

Amidst the wreckage of Mr. Crenshaw’s looted office, Daphne finds a matchbook with the words “Crow’s Nest” on it.  Mr. Crenshaw explains that the Crow’s Nest is an old waterfront dive hotel.  Freddy decides that they should check it out.

At the Crow\’s Nest hotel, the gang talks to Sally, the hotel manager who claims the demons are poking around her hotel as well.

A crusty sailor by the name of Albert Tross chirps in that he has seen the demons prowling the docks every night, and sneaking around in the fog.  Naturally, Freddy decides that they should visit the docks next.

Leading the gang into her hotel basement, she shows the gang a secret entrance to the underground city.  Here the gang finds the infamous iron lid that sealed the city, but they can not open it.  After walking away, the lid opens on its own, and a pink smoke emerges, followed by a demon.

The gang come across a museum full of stone statues of classic monsters (many of which resemble classic Scooby-Doo villains).  Inside they discover a demon exhibit and one of the demon statues is missing. 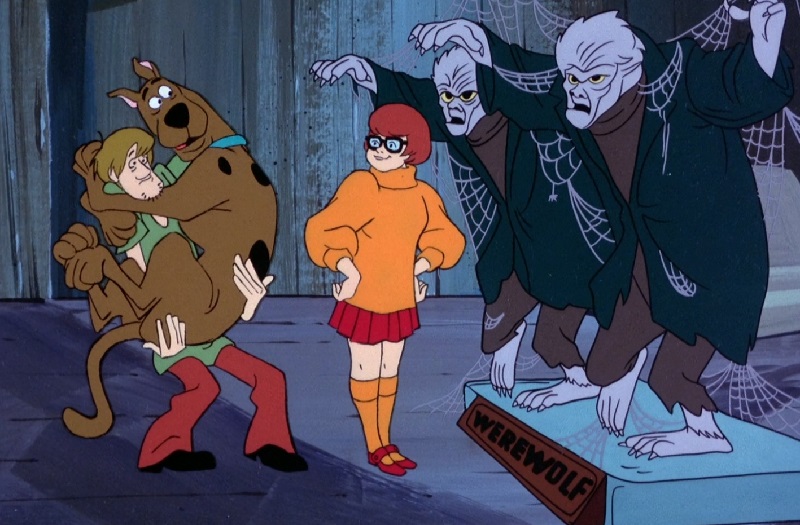 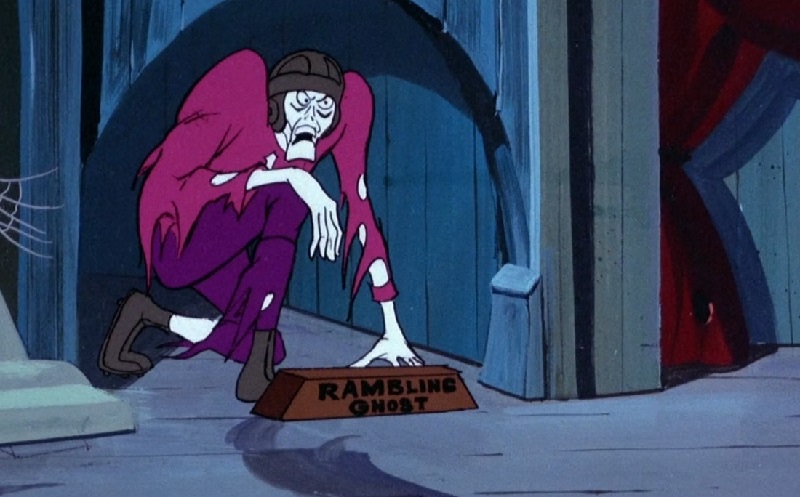 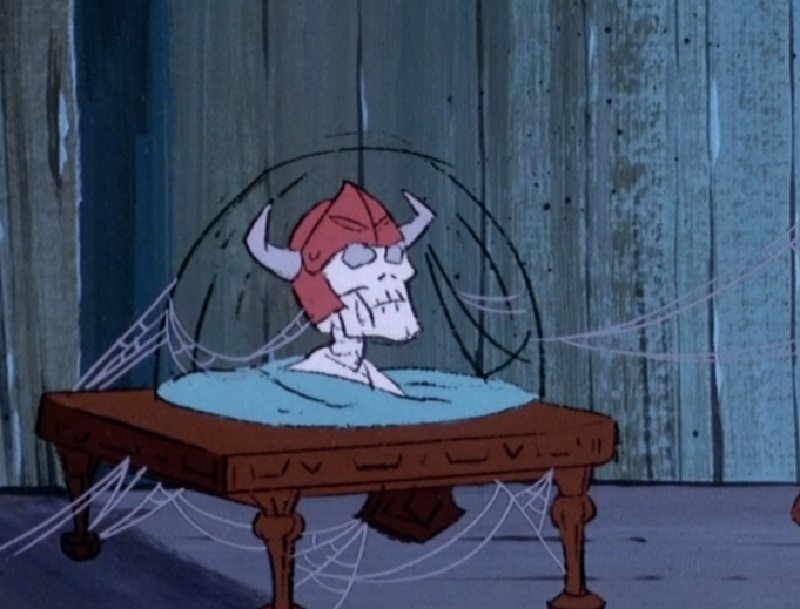 Daphne also gets snatched by a demon, so the gang split up to look for her.  The demon has left some burning footprints which Freddy and Velma follow, while Scooby and Shag do their own thing. 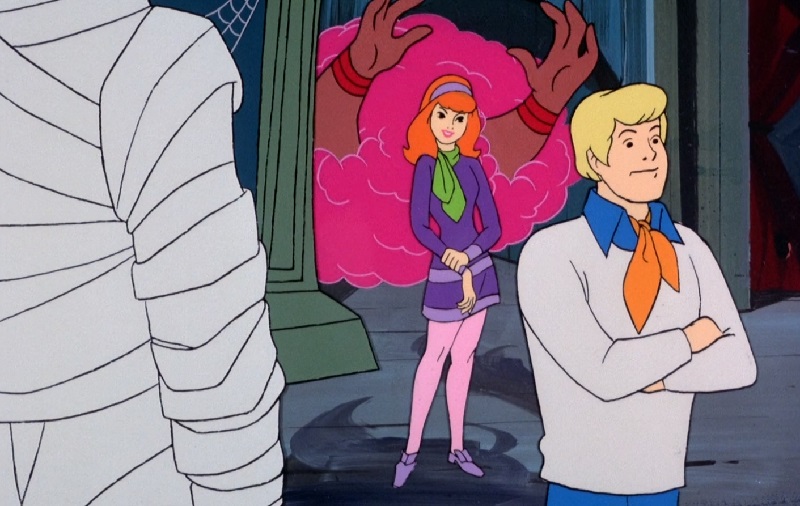 Scooby and Shaggy go into an old music store where they find Daphne stuffed inside a piano.   Meanwhile, Velma and Freddy are in an old drugstore where Velma finds a bottle of pink gas that matches the colour of smoke that appears when the demon shows up. 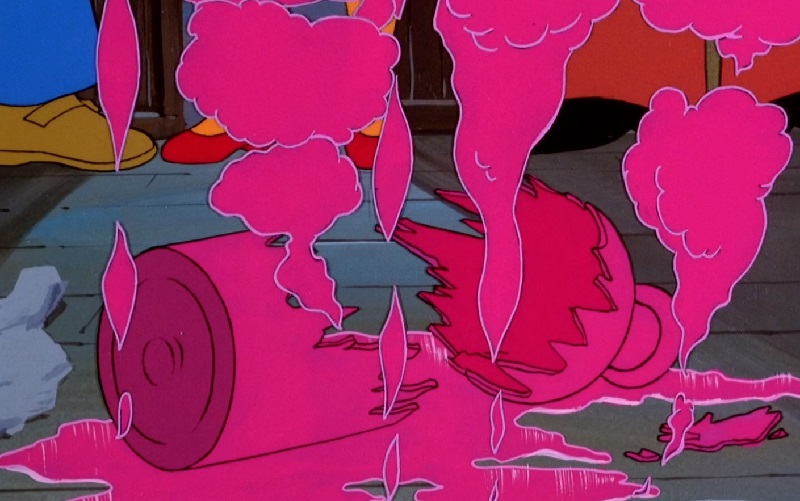 The demon appears and chases the gang out of the underground city.  There, they drive back to the construction site to retrieve the talisman and find both Mr. Crenshaw and the talisman gone. 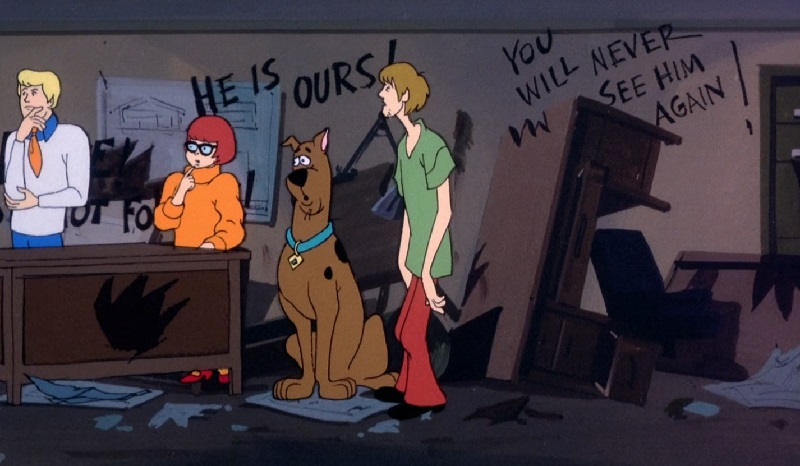 Jumping off the cable car, Scooby and Shaggy take refuge in an old movie set where they meet up with Freddy, Daphne and Velma.  The set leads back to the statue museum where they find all the demon statues missing. 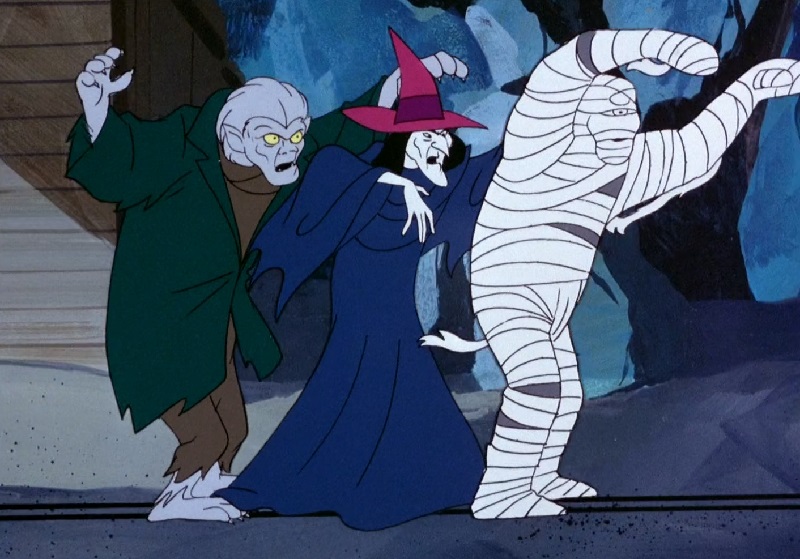 Freddy lays down his trap using some of the monster statues on the cable car rails.  Using the monsters on the rail tracks, Freddy steers the demon towards the iron lid. 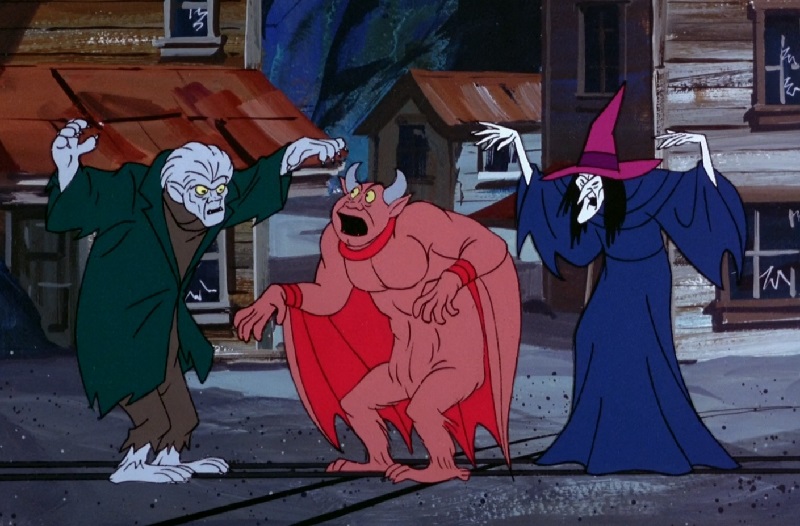 The demon opens the iron lid and this time the gang can follow him through.  Going through the tunnel, they are led back to the Crow’s Nest hotel.  Here they find a chest full of coins, as well as a lurking Albert Tross.

Turns out, Albert was using the Albert Tross disguise to get into Sally’s basement as he was pretending to be a tenant of the hotel.  From there, he was using a demon costume to haunt the construction site, and the demon statues were hooked up to the rail car system to make it appear that there were several demons running around.

The pink smoke and burning hand prints were all manufactured using the old chemicals from the pharmacy.  Where the gold coins came from… well, that is never fully explained.  Maybe he found it in the city below, or maybe the underground city allowed him to rob banks, or maybe it was just his construction funds.

I give this episode a 9.5 out of 10.  The only thing I didn’t like was the demon design.  I felt the demon looked a bit bloated, and I would have preferred something scarier.

Otherwise, the stone museum was super cool with all its monsters and some throwbacks to some classic Scooby episodes such as a similar-looking werewolf from Who’s Afraid of the Big Bad Werewolf and the Witch from Which Witch is Which.  We even see the Rambling Ghost, which had yet to air.  I’m curious about that skull with the samurai looking helmet. I’m also curious about what the heck Avigo statue is about as it never appeared again is Scooby lore again.

We also get some great locations, such as the Seattle Space Needle, the ransacked construction office/site, the Crow’s Nest dockside hotel, and of course, the underground city with its abandoned pharmacy and music store.

Sally was also a lot of fun, especially her many salty sea phrased sayings.

Seattle Underground is a real thing, and you can read more about it on the wikipedia page.