The Ghost that Sacked the Quarterback is episode #14 of the Scooby-Doo/Dynomutt Hour and originally aired on December 4, 1976.  This episode sees the gang at a Hawks vs Cougars football game where the star player is kidnapped by the ghost of a 1930’s football player known as the Rambling Ghost.

I love the design of the Rambling Ghost, as it is quite creepy.  Granted, while it is rather similar to Dr. Coffin from The Harum-Scarum Sanitarium, they are both essentially zombies which more or less explains the similarities.

The Ghost that Sacked the Quarterback – Episode Review

The episode begins with the gang attending a Hawks vs Cougars football game.  The score is set to 0 for both teams, but that doesn’t stop the crowd’s excitement.  While doing a clumsy cheer for the Hawks, Scooby ends up spotting the Rambling Ghost but is ignored by the gang as they continue to watch the game. 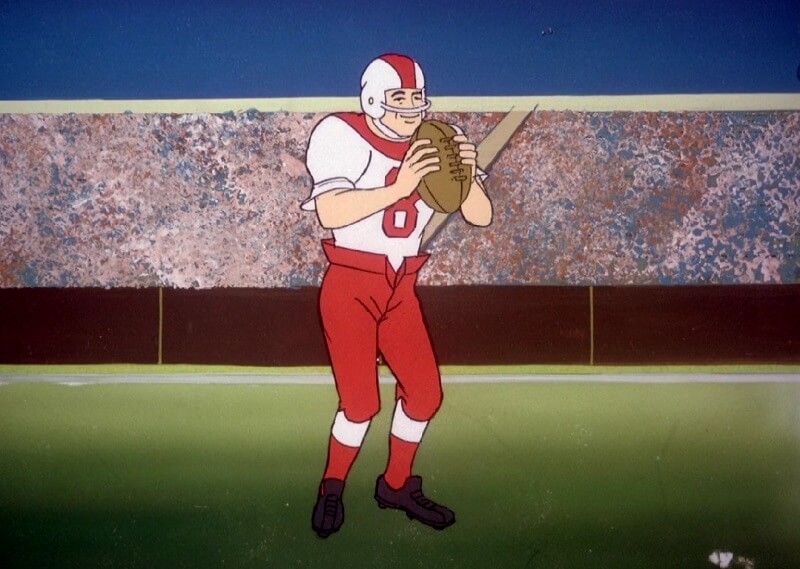 Right at the end of the game, Flash Granger – the Hawk’s star player, scores the winning touchdown, and while being carried off the field by his team, multiple fireworks go off, along with the Hawk\’s mechanical bird mascot flying around.  Amidst all the smoke and celebratory fun, Flash disappears.  Meanwhile, the Rambling Ghost, a zombie-looking football player, appears on top of the scoreboard, simultaneously mocking and scaring the crowd.

Leaving the stadium, Velma discloses that the police still haven\’t found Flash Granger, nor have they found any clues. All they have to go on is the Rambling Ghost appearing. Determined to solve this mystery, the gang head to Mr. Prentice’s house as he is the Hawks stadium owner.

At the house, Mr. Prentice explains that in the 1930’s the football player nicknamed the Rambling Ghost was booed off the field during a game. Upon exiting, he cursed the stadium and was never seen again, until now. Mr. Prentice suspects that the Rambling Ghost kidnapped Flash, as, without their star player, the Hawks will never be able to win. Furthermore, the fans are frightened, which means ticket sales are now way down.

Intrigued, the gang sits in on a practice session and are warned to stay away by another player named Crunch Connors, Flash’s replacement. While searching for clues, Crunch vanishes into thin air, and the Rambling Ghost appears. A small chase ensues before the gang reunite and decide to split up and look for clues. 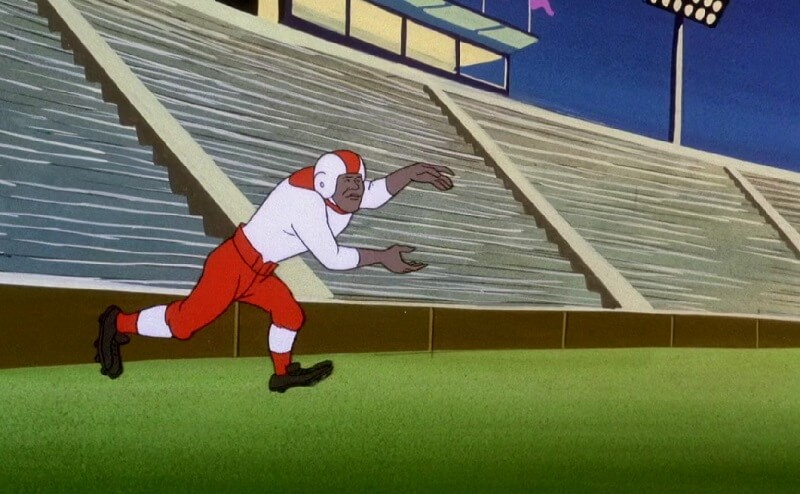 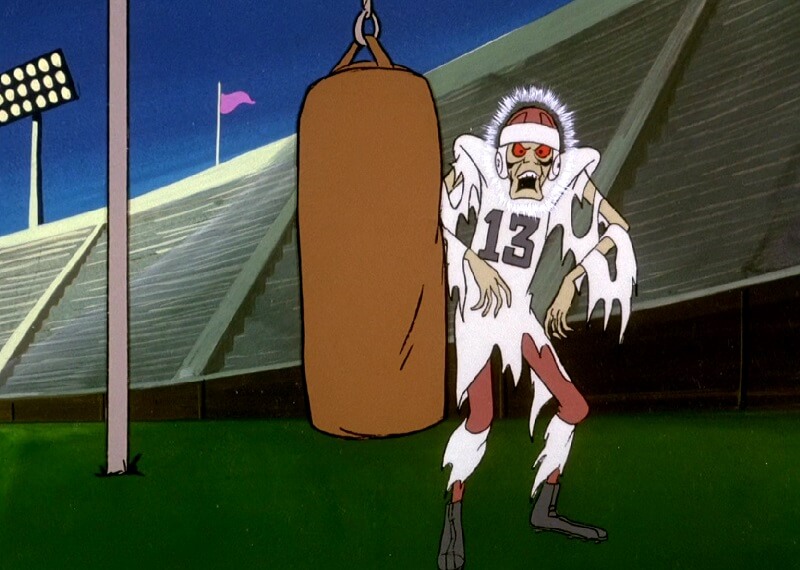 Hiding in a closet is Bulldog Pertowsky. He claims he came up to make sure his name was spelt right and saw the phantom, so he hid himself away.

Back on the field, the gang finds a trapdoor, which explains how Crunch Connors vanished. They discover the new stadium was built over an old stadium, so there are several tunnels underneath. Going down one tunnel, they split up, once again.

Shaggy, Scooby and Velma find an old dusty hall of fame trophy room, as well as the Rambling Ghost sitting at a desk with the Newspaper clue he had before. With a little bit of clumsy stealth, the manage to snag the newspaper away from him, but not without a chase! 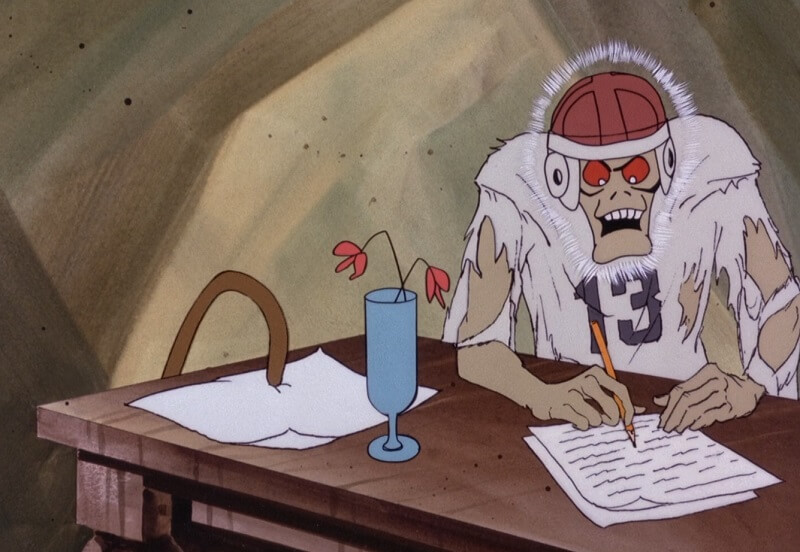 Evading the Rambling Ghost, Velma, Shaggy and Scooby fall into another trapdoor and land in a room that has both Flash and Crunch. This room must stink as they fall into a pile of dirty and old uniforms. Even Flash and Crunch are still wearing their uniforms, including the helmets. Come on, boys, that’ can’t be comfortable.

Flash and Crunch explain that before they disappeared, they blacked out. With no way to escape, Velma MacGyvers a way out with a canvas bag, air pump and a hairpin. 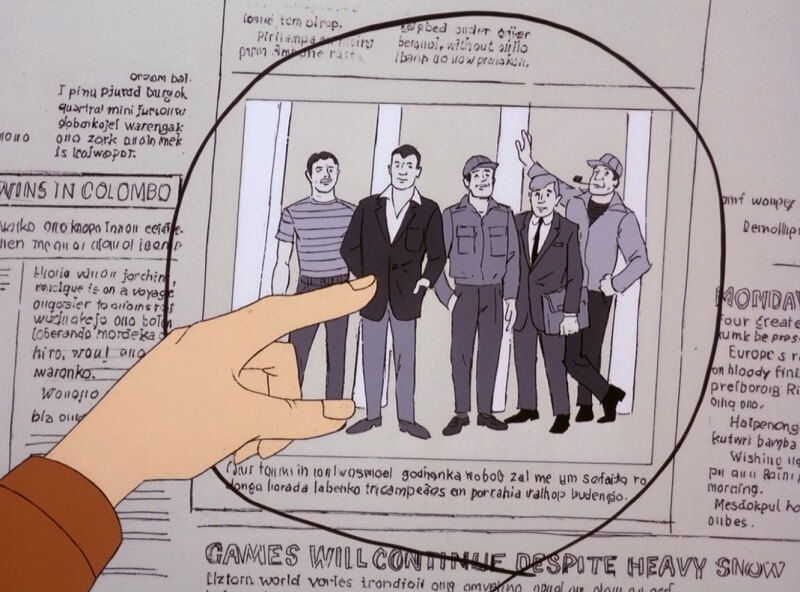 With the newspaper in hand, the gang head back to Mr. Prentice\’s house. There he explains it’s an article about the old coaching staff. Among the staff photo, he hasn’t talked to anyone but Coach Baxter for the past ten years.

Freddy devises a ridiculous plan to catch the phantom, using Shaggy and Scooby as a decoy Crunch Connors and Flash Granger at a practice game. I’m not sure how a dog on four legs and string-bean Shaggy could pass as two hefty professional football players, but the plan works, and they end up catching the Rambling Ghost. 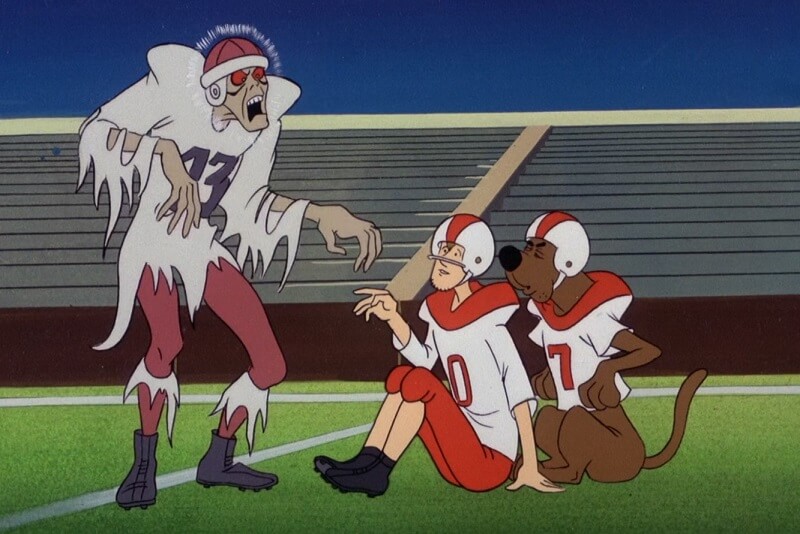 Unmasking the ghost, it is revealed to be Mr. Ellsworth, the scoreboard operator. Freddy realizes that this is a ruse and pulls off another rubber mask to reveal that it’s Buck Bender. Buck, who we haven’t heard about until now was an old coach that Mr. Prentice fired a few years ago. You see, the newspaper article had incriminating evidence on Buck Bender, so he needed to steal it to get away with the revenge he was taking upon the team and stadium for firing him. 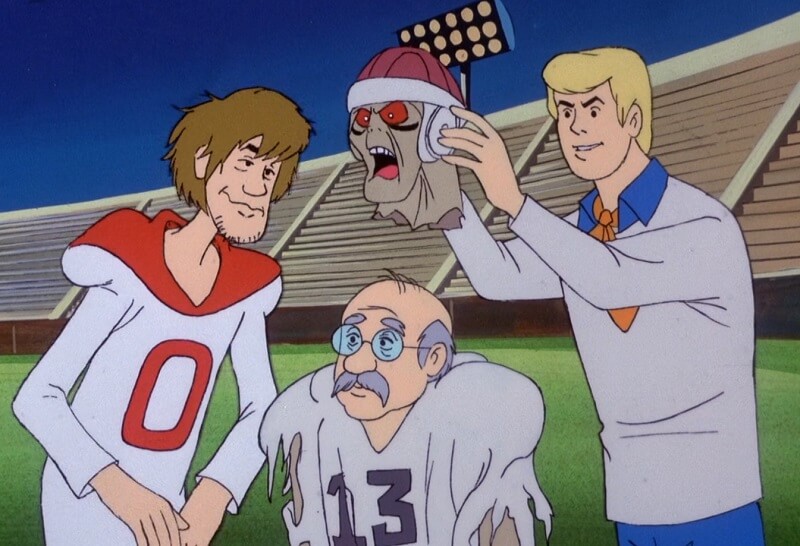 The gang explains that they knew Crunch disappeared by falling through a trap door, but with Flash, Buck used the Hawks mechanical mascot bird to swoop down in the firework smoke and snatch Flash away. Happy, Mr. Prentice gives the gang free tickets on the 50-yard line for the upcoming Wonder Ball championship game.

With another mystery solved, the gang celebrates the Hawks winning a championship game against the Sharks. The Hawks celebrate by giving due credit to the gang for saving the day.

I give this episode an 8.5 out of 10. If I were a football fan, I’d probably give this a higher score as it is a fun episode. The secret tunnels under the stage were rather creepy, and the Rambling Ghost simply looks amazing. You also get a double fake-out reveal, which might be the first in Scooby-Doo history. Don\’t quote me on that, as I’ve yet to revisit every episode.

The jokes and chase scenes were entertaining in this one as well. They made full use of the football stadium and all it had to offer, from training equipment, to steam room shenanigans, to people hiding in lockers, to long and forgotten hall of fames, to giant shark mascots and giant flying mechanical birds. The abandoned old stadium from the 1930s underneath the stadium was genius! Very creative and fun!

This doesn’t get a perfect score for me as, well, if you’ve been watching my channel, you know I love the spookier episodes. Since most of this took place during the day, it just didn’t have that creepy edge of my seat atmosphere for me. If I were a football fan though, this would probably be my favourite episode for sure!

I also don’t get the significance of the newspaper clipping. So what, there’s a picture of Buck with the team. I’m not sure how that is incriminating, as I\’m certain there were many newspaper articles mentioning him as part of the team, as long as office paperwork, such as his termination notice. But much like the Rambling Ghost, I’m rambling on myself, as it’s a cartoon for kids.

If you are hyping yourself up for the Super Bowl Game, The Ghost that Sacked the Quarterback is the episode to watch!

Until next time, Stay Spooky!