The Harum Scarum Sanitarium originally aired on October 23, 1976 and is the 7th episode of the first season of the Scooby-Doo Show.

Here we see the gang visiting Canada where they get lost and can’t find their way to the border. So instead, they coop up for the night in a haunted Sanitarium which is spooked by the Ghost of Doctor Coffin.

Another point of tivia is that getting lost in this area in the backwoods is next to impossible. Canada, while huge, has 35% of our population living in this dense area. The gang say they have driven for an hour without spotting anything, which again is impossible. My house is about a 45 minute drive away from the falls, and I would certainly see a lot of life on my way there.

The episode begins with the gang lost near Niagara Falls in Canada, off in the distance, the creepy Doctor Coffin laughs on a nearby cliff. 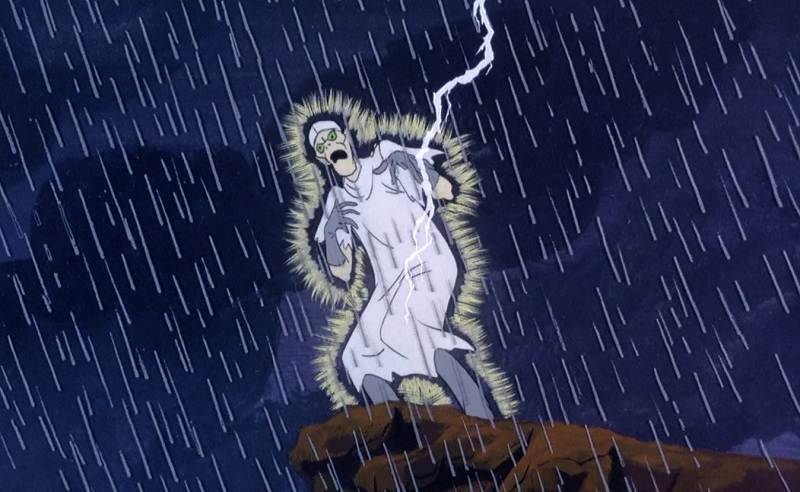 The gang come to a road block where they encounter a friendly Mountie named Officer Oldfield. The gang explain they are tourists, and he explains the side roads are blocked to prevent criminals from sneaking over the border. The Mountie then allows the gang to pass and tells them to take the next left called Foster Road which will take them to the main highway. 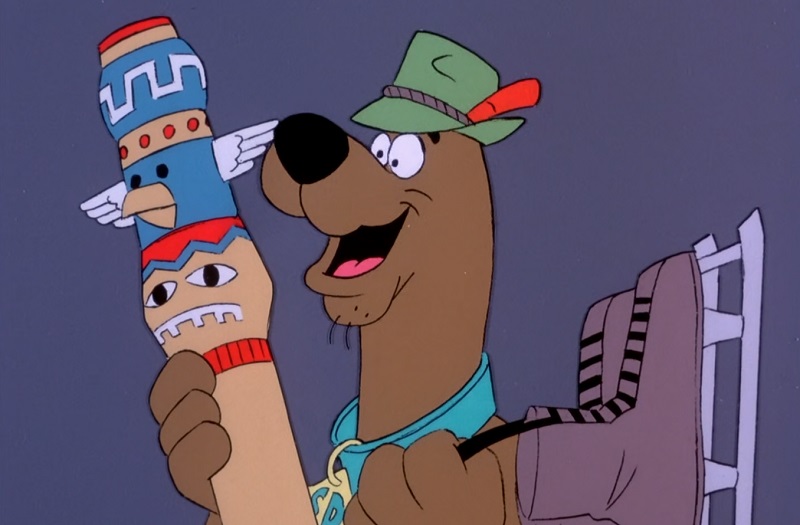 The right fork, he explains, will take them to the Ghost of Dr. Coffin who haunts that side of the area.

Unfortunately an ill placed lightning bolt hits the Foster Road sign and causes it to swing to the right. So when the gang see it, they continue down the right fork, and end up lost. I guess Freddy forgot his left from his right. A mistake that we all make sometimes I suppose. 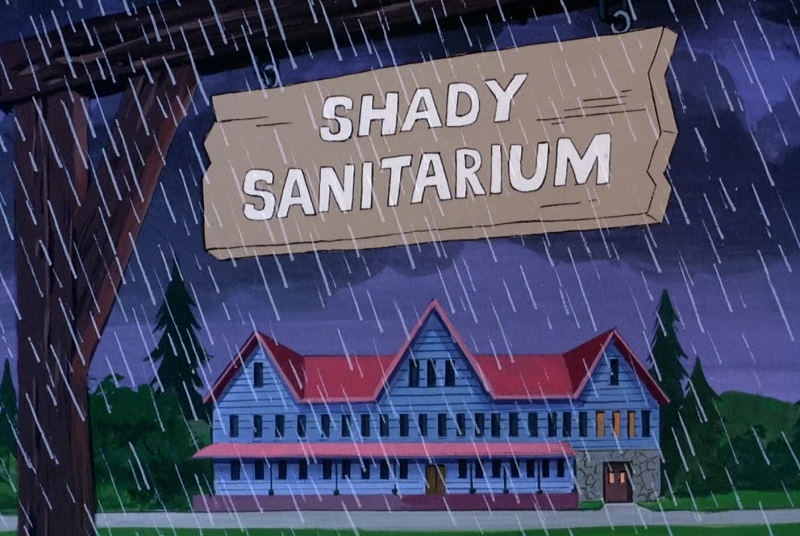 An ambulance passes them, so they follow it to Shady Sanitarium. The gang watch the ambulance bring in a couple new patients, while only Scooby sees the mad Doctor Coffin in a window above.

The rain lets up, and the gang get out of the Mystery Machine and immediately hear an organ being played. Two vicious dogs run out of the Sanitarium and chase Scooby and Shaggy up a tree. 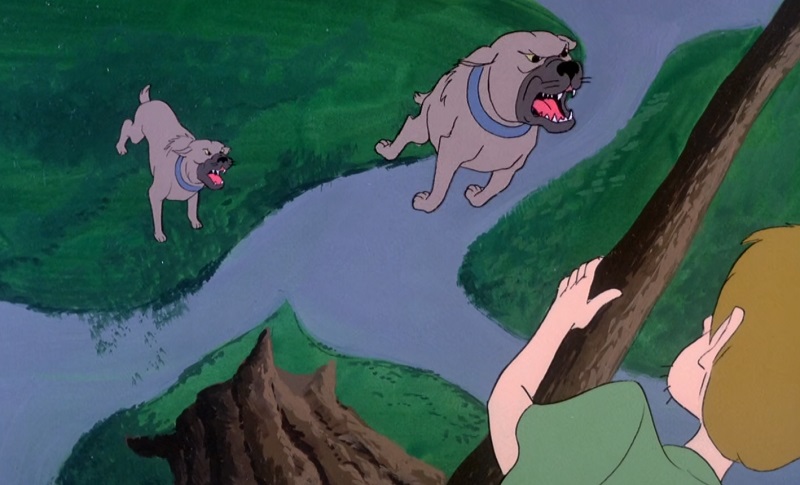 The Organ stops and the two dogs wander off like two friendly puppies.

Ringing the doorbell, the Gang meet Dr. Tooksbury who welcomes them in. They see the two guard dogs, Cuddles and Snookem’s who were Dr. Coffins pets. Dr. Tooksbury explains he was Dr. Coffin’s assistant and that Dr. Coffin was studying brain waves and used the organ music to control the dogs. 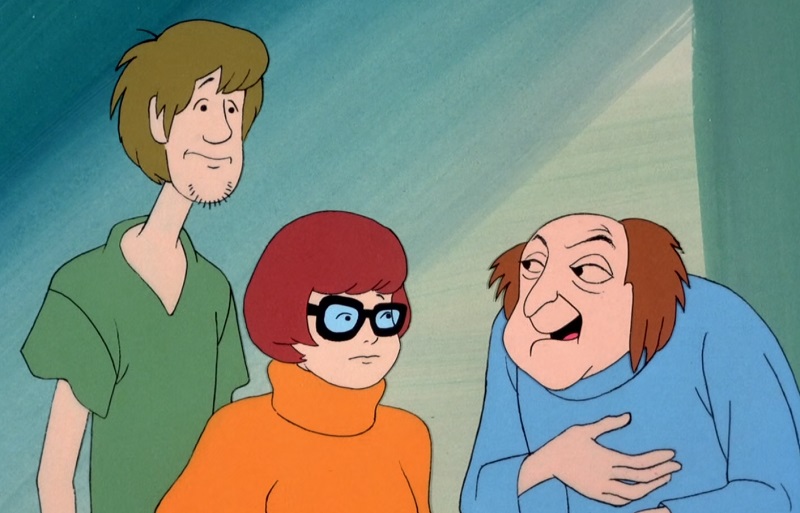 The gang say they heard the organ, and Dr. Tooksbury verifies that the ghost of Dr. Coffin was playing the organ. He then invites them to dinner.

Freddy asks why there are no patients and Dr. Tooksbury explains they were scared off by Dr. Coffin. All of the new patients he never sees, they all disappear as well.

The gang spend the night, and as they are settling down for bed, Scooby spots Dr. Coffin once more. Out of fear, Scooby jumps on a mounted moose head that opens up a secret passage. Inside they find a giant mirror that takes up an entire wall. 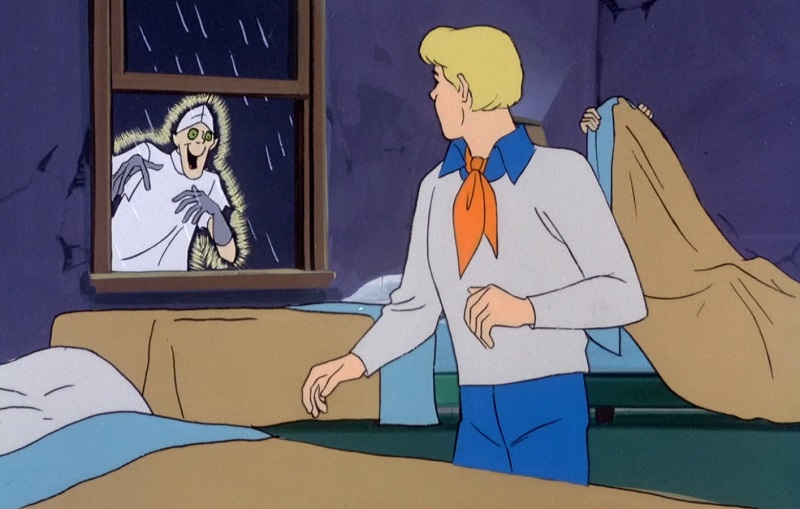 Shaggy turns on a switch that opens up the roof where the moon blasts in and creates a focused beam of heat that gives Scooby a little burn some of Scooby’s fur off. Freddy says it’s a solar furnace and is typically used by the sun. Doctor Coffin shows up and scares the three of them away. 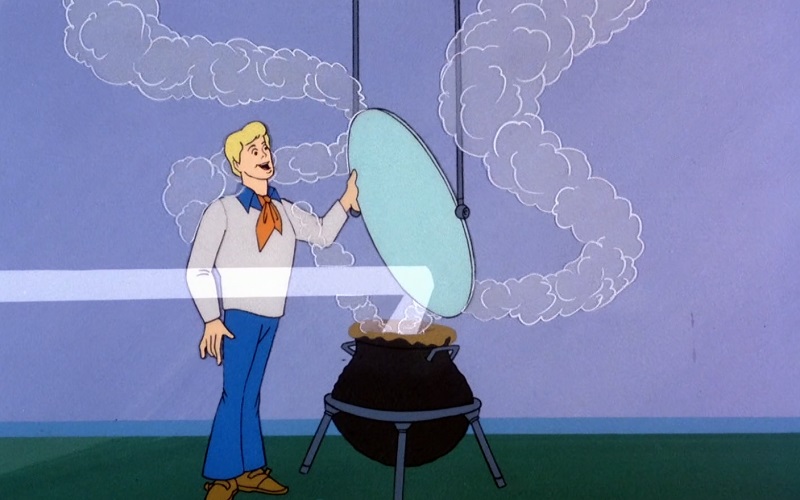 Back in the girl’s room, Velma and Daphne spot the ambulance removing patients, and they do not look alive.

Freddy, Shaggy and Scooby run in and everyone explains to each other what they’ve observed. Freddy decides to follow the ambulance, but unfortunately they come across a sign that says Warning, Bridge Out Ahead. Freddy risks it, but they lose the ambulance, and nearly drive the Mystery Machine into the falls from the broken bridge. They also spot Dr. Coffin mocking them on a cliff.

Back at Shady Sanitarium, the gang decides to get some sleep. As Scooby sleeps, he hears the organ which puts him in a trance and he ends up dancing with Cuddles and Snookem’s the two guard dogs. 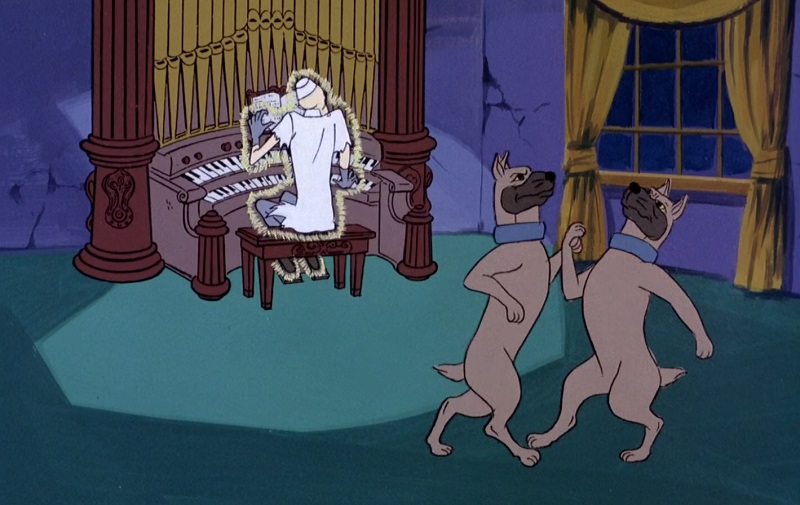 The rest of the gang wake up and go investigate. They watch the Dr. play his organ and yell at Scooby to wake up. This unfortunately wakes up the guard dogs who chase the gang off.

The gang end up in a room with a pile of wigs, which appears to be another clue.

Freddy and the girls investigate the Morgue and find several dead patients. Freddy removes one of the sheets and finds stacks of gold bullion with wigs to make them look like people. Hearing footsteps, the three of them hide. 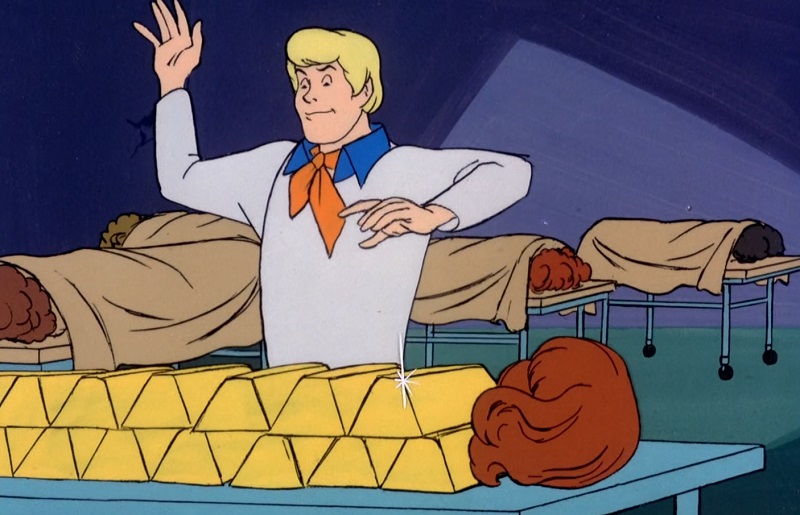 Shaggy and Scooby then run into the room, and hear the ambulance drivers approach so they hide under two sheets. The two are taken away so Freddy and the girls hop in the Mystery Machine and take chase.

This time the ambulance doesn’t get away, and Freddy follows them into a mountain cave. The tunnel runs behind the falls from Canada to the United States. 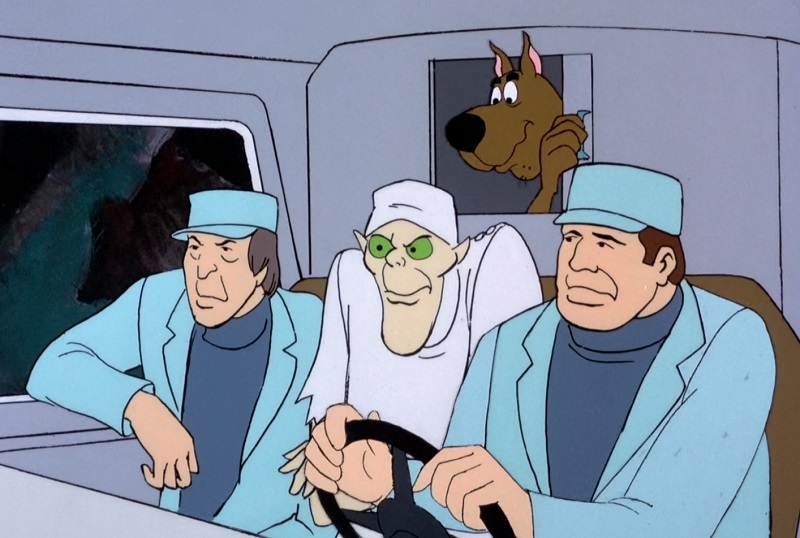 Inside they find stacks and stacks of gold, where Dr. Coffin is using a bread wrapping machine to disguise it as loaves of bread to smuggle it easier. 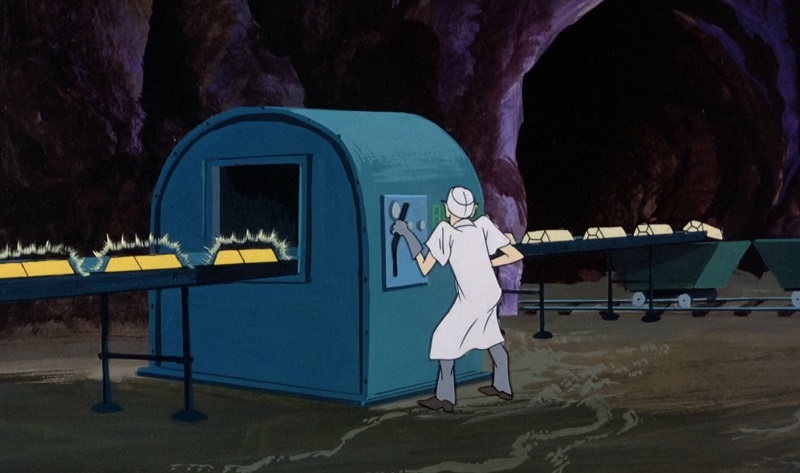 Scooby and Shaggy are discovered by the ambulance driver and we get one more chase on a mine cart that ends up sending Dr. Coffin and his buddies through the bread wrapping machine where they are bound up.

Freddy removes Dr. Coffin’s mask and it turns out to be Officer Oldfield. Officer Oldfield is the ringleader behind a gold robbery that occurred in Montreal a month ago. Using the ghost costume and the two dogs, he kept everyone scared away. To get past any roadblocks they used the ambulance to transport the gold to the mountain cave where he could conceal it as bread and smuggle it into the states where it would be distributed. 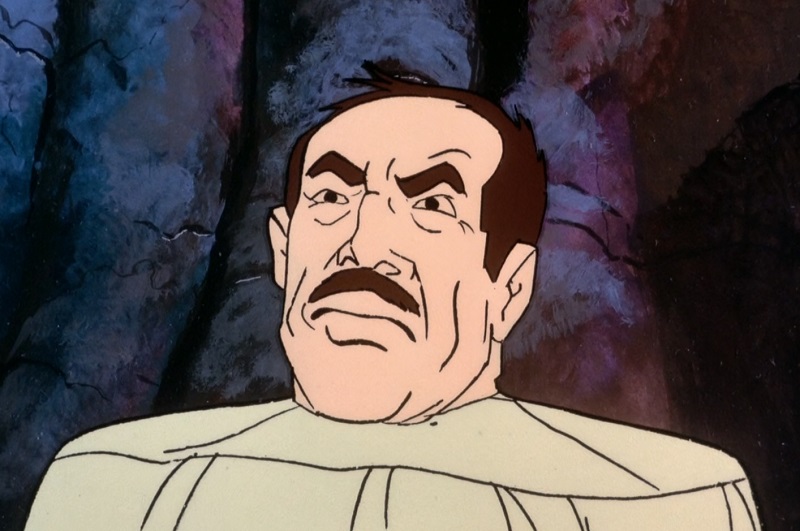 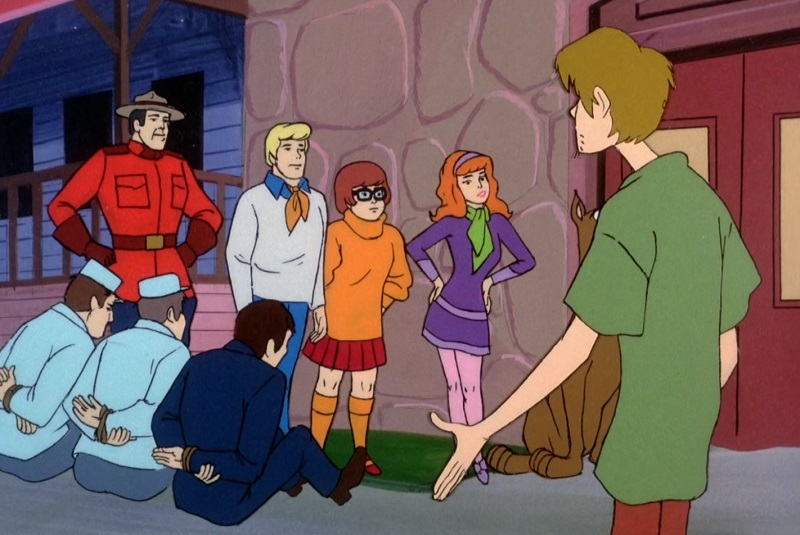 This episode is amazing in that it balances spookiness, mystery, and humour perfectly. All the right clues are set up so we can follow along, and when the bad guy is revealed it’s a surprise, but it also makes a lot of sense.

There’s an incredible feeling of dread and suspense as Dr. Coffin is a frightening looking ghost. As well, we see what we think are dead bodies being transported by the ambulance drivers and in the morgue.

Finally, the humour is wonderful, and not over the top. Having Scooby slow dance with one of the guard dogs is so simple, but funny enough to lighten the mood. Yet at the same time, the suspense is maintained as we know eventually the two vicious guard dogs will wake up. Plus, the simple fact remains that Dr. Coffin is still in the room playing that scary music.

Such a brilliant scene and a flawless episode for me.

Join me next week when I will be covering the No Faced Zombie Chase. Until then, Stay Spooky! 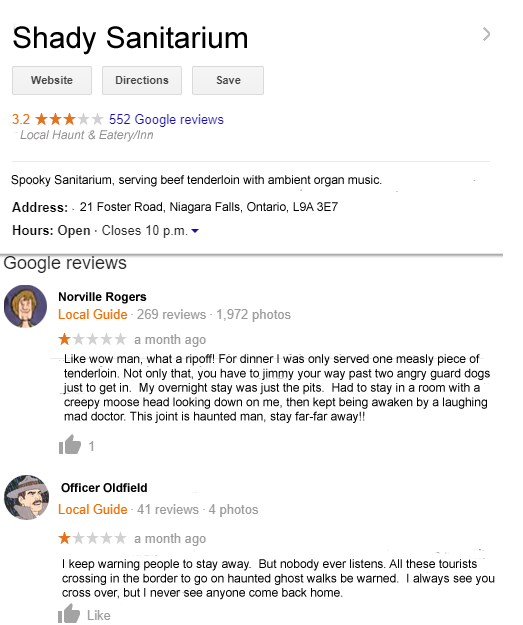