Watt a Shocking Ghost is the fourth episode of the Scooby-Doo Show and originally aired on October 2, 1976.

The episode sees the gang in a deserted ski resort, where the tourists and home owners have been scared away by a 10,000 volt ghost.

The 10,000 volt ghost, is of course, a very memorable ghost and even featured in the opening credits.

I remember watching this one quite a few times as a kid and always loving it for its winter location, and the ghost design.

As for trivia, this is one of the rare episodes where Daphne and Velma are used as bait and not Scooby and Shaggy. Also, the end villain says the words ‘meddling kids’, which isn’t the first time, but for me, it’s always fun to hear that phrase in an episode.

Velma also calls Scooby and Shaggy a couple of Hammy Hamsters. While probably not a reference, and just a coincidence, I thought this was funny as up in Canada we had a famous kids tv show called Hammy Hamster that aired after Scooby-Doo. The show was a live action show using real rodents to act out scenarios. So you’d see hamsters in model planes, fake spaceships and toy riverboats.

Well, enough of my jibber jabber, let’s get on with the review.

The episode begins with a mysterious glowing ghost breaking into an electrical plant by melting a padlock off the front gate.

Nearby, the gang are driving on a steep and windy road to go skiing. Nearly low on gas and with a broken heater, the gang are excited to finally reach the snowy town of Winterhaven. 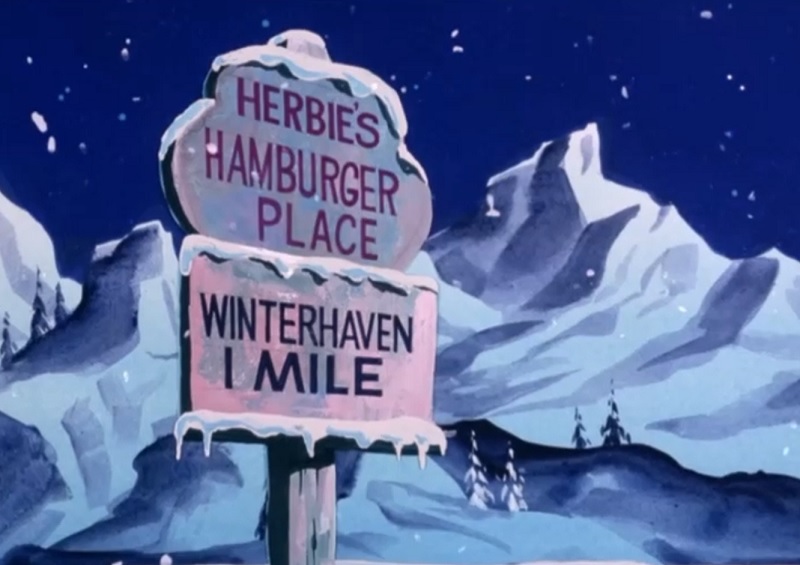 The whole town is blacked out and deserted. Both the gas station and Herbie’s Hamburger Place are closed, and the gang have run out of gas. With it being -30 outside, Freddy wants to hike to the next gas town. Fortunately, however, they spot a light on at the nearby ski lodge. 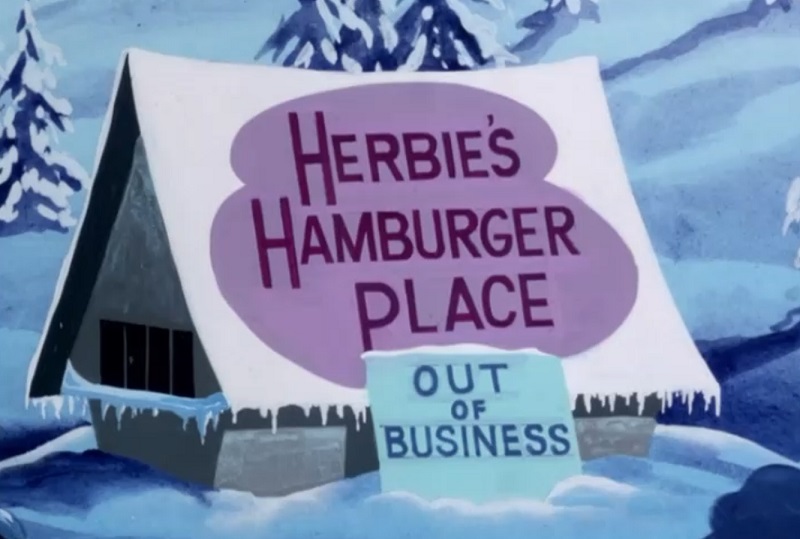 Knocking on the door, they meet Mayor Dudley who explains that they have no electricity or heat due to the 10,000 Volt Ghost. Their once popular ski resort had a violent winter storm that took down a hydro wire. Mr. Collins, the electrical plant owner, ordered an electrician named Voltner to reinstall the line. As Mr. Voltner worked away, there was a power overload that made Mr. Voltner disappear. Shortly after, Mr. Voltner’s ghost showed up and began haunting the town, scaring everyone away.

Mayor Dudley tells the gang they can spend the night, and Freddy suggests they get down to business looking for clues. At the power plant they find the front lock burnt off and a trail of ice running through the snow.

Slipping on the ice, Scooby and Shaggy crash through the front door. Inside, they search for more clues as the 10,000 volt ghost watches on unnoticed. 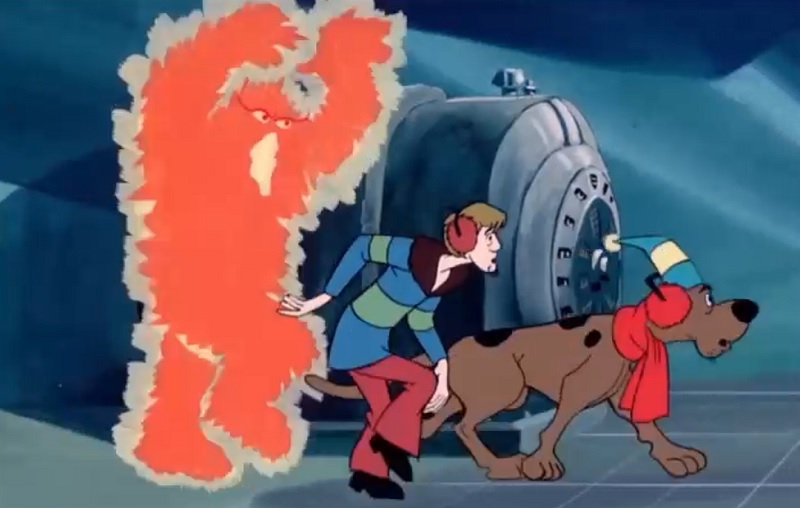 Their curiosity leads them to Mr. Collins, the electrical plant owner. Mr. Collins is here repairing the generator and gives his blessings for the gang to capture the 10,000 volt ghost.

Splitting up for clues, Shaggy and Scooby have their first run in with the 10,000 volt ghost and a chase occurs until they meet up with Freddy, Daphne and Velma.

At this point, the ghost shows up and chases everyone. Using the heat from his electrical body, the ghost can melt his way through steel doors.

The gang evade the ghost, and Velma finds the unusual clue of sunflower seeds on the ground. Daphne thinks they may have come from a pet shop she saw on the way into town so Velma, Scooby and Shaggy go investigate the pet shop, while Daphne and Freddy stay behind to look at Mr. Voltner’s house. 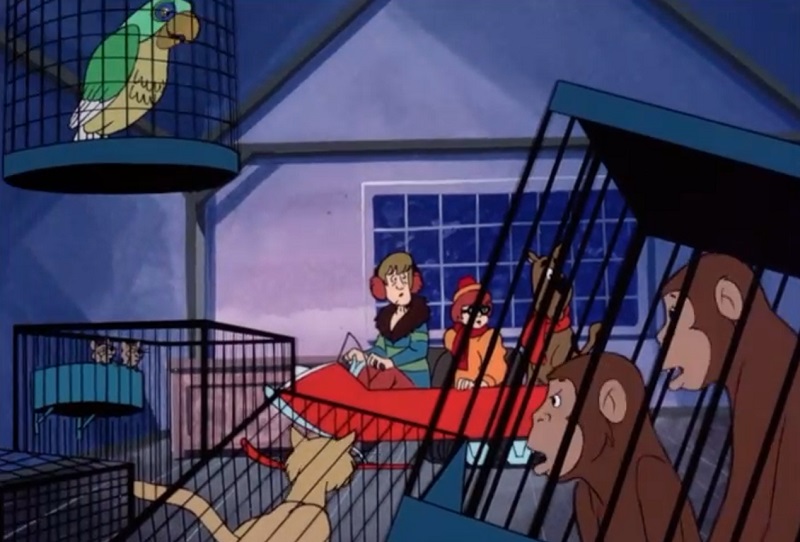 Inside the pet shop, the trio find more seeds. The three also find a talking parrot who they interrogate. The Parrot says the words ‘rubber suit’, ‘tunnel’ and ‘closet’.

Velma opens the closet and finds a rubber scuba suit, along with a tunnel, which the gang head down. As they enter the tunnel, a mysterious hand locks them in.

The tunnel brings Shaggy, Scooby and Velma back to the power plant and they head off to find Daphne and Freddy.

At Mr. Voltner’s house, Daphne finds a partial letter behind a mirror as she fixes up her hair. The letter reads – Whereas Running South Westerly Parcels 27-28-43-44-45- 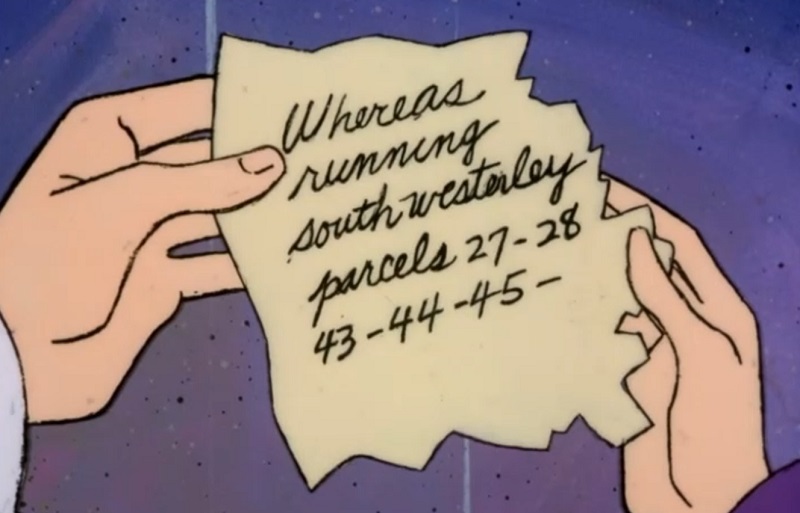 Everyone reunites with Mr. Collins and the Mayor where they explain all the clues. The gang then head down to the local courthouse to find clues to cross reference with the numbers in the letter.

At the courthouse, they find the book they need, but once more run into the 10,000 volt ghost and we get the classic filing cabinet scene of Shaggy and Scooby evading the ghost. 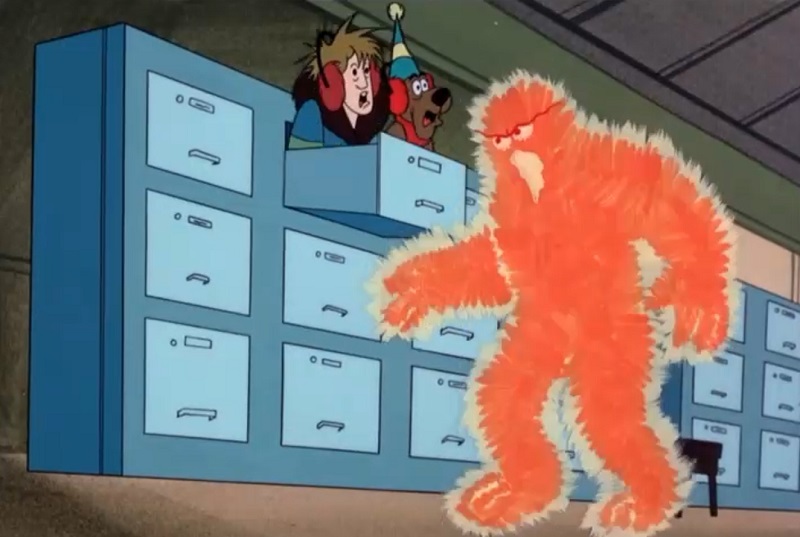 Freddy then gets everyone to run back to the Power Plant where he creates a giant electromagnet to capture the ghost. The trap nearly goes to plan, but unfortunately the ghost turns into a giant snowball that rolls after Scooby and Shaggy in an exciting chase that ends up a the Winterhaven County Jail.

The sheriff comes out and the snow has melted off the ghost short circuiting his suit. Removing his protective rubber mask, we find out that the ghost is Mr. Voltner.

Velma has figured the Mayor and Mr. Voltner were in cahoots where the Mayor has bought up land dirt cheap. The mayor realized that a freeway was being put in, and the nearby land would be super valuable, so they wanted to scare everyone away, driving real estate prices down.

If it weren’t for the bird seed sticking to his shoes, they would have gotten away with it all.

While fairly straight-forward, I feel this episode moves along at a brisk pace and is heightened by the monster design.

The 10,000 volt ghost looks cool, and as a kid with no artistic talent, he was always easy to draw. He also seemed dangerous in the way he could melt metal with the heat generated through his suit.

The deserted town of Winterhaven was also quite atmospheric, and it’s fun to see the abandoned power plant, pet store, ski lodge and Herbies Hamburger place.

Finally, I found the chase scenes much more engaging than usual. There are no silly parts as Scooby and Shaggy pretend to be someone else to fool the ghost. With this episode, we get straight on frights as nobody wants to get zapped.

Anyway, until next time, stay spooky!

The Ghost that Sacked the Quarterback