The Headless Horseman of Halloween is the fifth episode of The Scooby-Doo/Dynomutt Hour, and aired on October 9, 1976.

A Halloween favourite, this episode features the gang in Sleepy Hollow, Westchester County, New York.  Here they are attending a Halloween party at Crane Manor, which unfortunately is cut short by the Headless Horseman head stealing antics.

If you’d like to own this episode, it’s available on the excellent Scooby-Doo/Dynomutt Hour collection on Amazon!

If you aren’t familiar with the Ichabod Crane and Headless Horseman fable, I recommend you watch the excellent Disney cartoon, The Adventures of Ichabod and Mr. Toad.  This is mandatory Halloween season viewing!

The episode opens up at Crane Manor, where a costume ball is being held.  Outside in the thick fog, a horseman with a jack-o-lantern head gallops by the mansion with a sinister grin. Inside the Manor, the gang are enjoying the Halloween festivities dressed in their Halloween costumes.  Shaggy is a Vampire and uses his fangs to pluck apples out of the bobbing bucket.  Meanwhile, Freddy is a pirate and uses his ascot as a pirate bandanna.  Velma is dressed as a Witch, and Daphne is a Faerie Princess.

The ultimate costume goes to Scooby-Doo and Scooby-Dum, who team up as a horse.  The entire gang has been invited to the Manor by Mrs. Gertrude Crane as they are pals with her niece, Beth. Chasing a runaway apple outside, Scooby, Shaggy and Scooby Dum encounter the Headless Horseman and dash back inside to tell the rest of the gang.  The gang are in the library with Mrs. Crane’s niece, who’s named Beth.  Beth (who is dressed as a pink cat) explains that her great-great-grandfather was Ichabod Crane, and she fears that the Headless Horseman has come back to haunt her family.

Daphne, on the other hand, feels that they are all in danger, as the Headless Horseman has just come back looking for a head.

Returning to the party, the power goes off and the Headless Horseman makes his grand entrance and exclaims ‘I Want a Head’!  This scares off all the party-goers, except for Beth, Mrs. Crane and the entire gang.

The gang split up to look for clues and Velma, Scooby, Scooby-Dum and Shaggy search upstairs but only find a stray bowling ball at first.  Returning downstairs, they bump into the Headless Horseman, who takes chase.  After outracing the Headless Horseman, they hear a scream and discover that he has gone after Mrs. Crane.

Mrs. Crane tells the gang that a pasty white hand had reached from a secret panel for her neck.  As if on cue, Tarloff, the Manor’s butler, walks in and Velma notices his ghostly white hands.  Tarloff explains that he has powdered sugar on his digits from dusting spiced-cake for the party.  Scooby gracefully licks off the sugar to confirm. Elwood states that he’s already called his flying buddy, who just happens to be the local bank manager.  The bank manager has offered to open the bank so Elwood can safely store the diamond necklace in a safety deposit box. Elwood takes Mrs. Crane\’s necklace and drives off to the bank while the gang watches.  Just after he drives off, the Horseman appears, however this time, he has Elwood’s head. 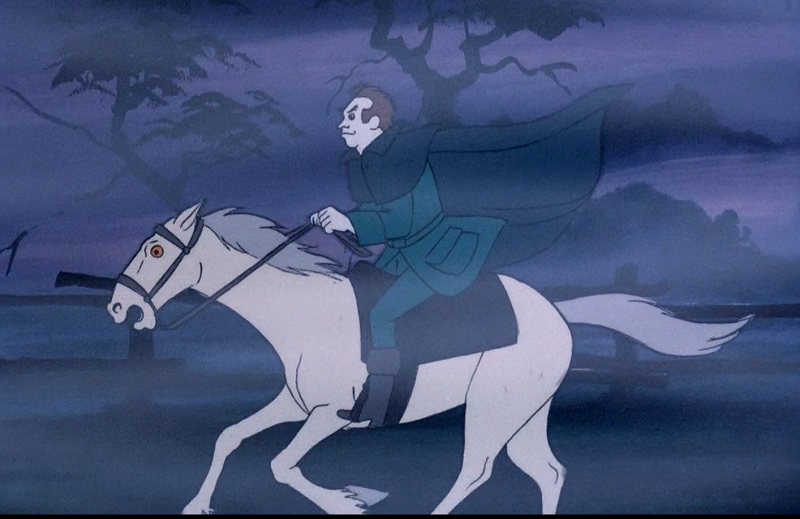 The Horseman disappears into the night, and the gang run to where Elwood’s car has crashed.  All that seems to remain is Elwood\’s clothes and a pumpkin head.

Upon further investigation, Fred notices that the ignition keys are missing.  Scooby-Dum digs up a small picture of Elwood that has glue on the backside.  Shaggy, meanwhile, gloats that he\’s found the perfect clue, a newspaper article about flying saucers spotted at a beautician’s convention. Returning back to the house, they bump into Tarloff on the lonely road.  Tarloff explains that he went off to make a phone call at the neighbour’s house to complain about the lack of power.  On his way down the road he noticed that a tree had been chopped down, and as it fell it had taken down both the power lines and telephone lines.

Racing off to the local airport, they find the Headless Horseman ready to take off in a small two-seater airplane.  After a series of comical events, Scooby and Shaggy cause the Horseman to crash his plane, and it is revealed that it was Cousin Elwood. It seems that Cousin Elwood was after Mrs. Crane’s diamond necklace this entire time.  Reading the back of Shaggy’s UFO article from the newspaper, it states that Elwood’s APEX International shoe company had gone bankrupt and he needed the money to bail himself out. Freddy and Velma had figured something fishy was going on as Elwood had said that he called the bank.  However, this was impossible as Tarloff had explained the phone lines had been dead.  The picture of Elwood in the car was for his passport that he needed when he flew out of the country, and the missing car keys had been taken by Elwood out of habit.

With another mystery solved, the local sheriff hauls deadbeat Cousin Elwood off to the slammer.

I give this episode a 10/10.  I just love the lore of the Headless Horseman and this episode delivers the legend in spades.  We get a creepy villain, a costume party, and an interesting mystery.  The Horseman barging in and exclaiming that “I want a Head” is incredibly entertaining.

I also loved the gang’s costumes.  Velma and Daphne both look cute in their respective outfits, and Beth’s pink cat outfit is downright awesome.  The fact that Freddy uses his ascot as a pirate bandanna is amazing!

Tarloff is a nod take on the name Boris Karloff, who was the actor who played Frankenstein\’s monster in the original films.  And Elwood dressed as the Headless Horseman looked incredibly creepy.

Not much more I can say about this one other than I watch it every Halloween, and thus I might be blind to its flaws. Let me know how you feel in the comments below!