The Spirits of ’76 is the sixteenth and final episode of the first season of the Scooby-Doo Dynomutt Hour, now lovingly referred to as The Scooby-Doo Show. It originally aired on December 18, 1976 and finds the gang in Washington D.C. at the Splitstonian Institute where they are haunted by the ghosts of Benedict Arnold, William Demont and Major Andre.

As a little history lesson, Benedict Arnold was an American general who changed sides in 1779, betraying America to the British. Major John Andre was a British spy who was caught and hanged. Meanwhile William Demont was an assistant officer who also switched sides and joined the British during the Battle of Fort Washington in 1776.

Splitstonian is obviously a take on the Smithsonian Institute, but I can’t help but feel that there are a few kids out there who have been referring to the Splitsonian without knowing any better (perhaps thinking it was some sort of bowling museum).

The Spirits of ’76 Review

The episode opens up with the gang driving in the Mystery Machine on a dark and stormy night. We see several famous building in Washington flash by, including the Washington Monument, the White House and the Lincoln Memorial. 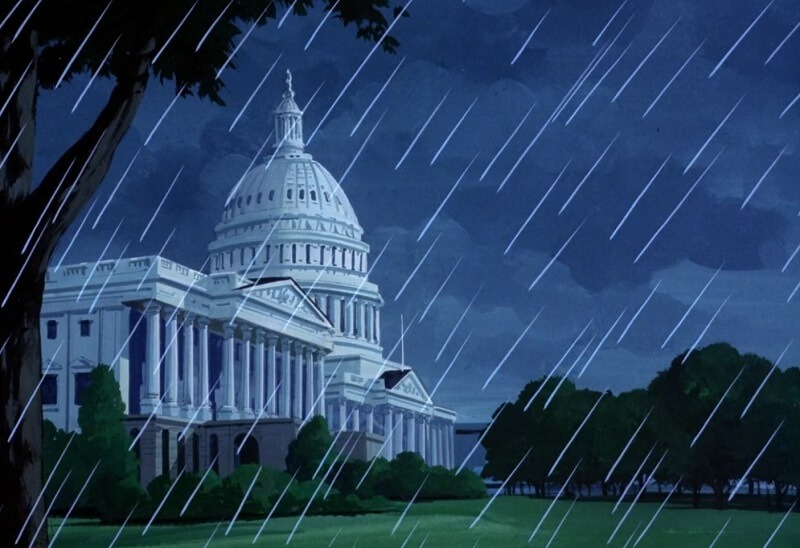 Freddy is a little upset as they came for the Bicentennial celebration and all they can see is ‘Rain, Rain, Rain’. Daphne had her heart on visiting the Lincoln Memorial, but since it is outdoors, it’s too wet. Shaggy suggests they visit the Splitstonian institute as they can spend hours inside and keep dry.

Running inside, they miss the shadowy figure above creepily watching them.

Inside, the museum is dark, spooky and empty. A museum guard named Mr. Grumper informs them that the place is haunted and it has scared off all the tourists. He also remarks that they are closing soon before he heads off to do his rounds.

Known for her shoe fetish, Daphne finds it odd that the security guard’s shoes are squeaky and wet, so the Freddy suggests that they keep their eyes open for clues.

Shaggy points to some wax sculptures thinking it’s some tourists, but Velma and Daphne explain to him that it’s a tableau called ‘The Traitors of American History’. Satisfied, all but Scooby walk away, where he quickly discovers that the dummy of William Demont isn’t a dummy after all. 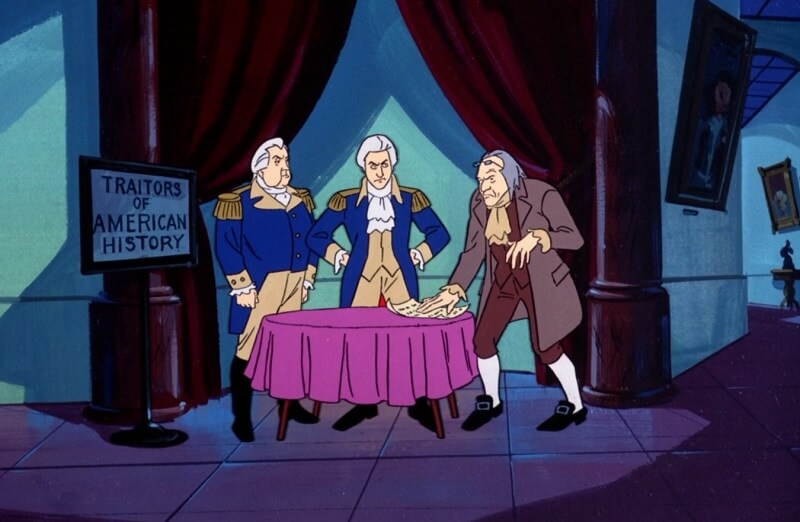 Terrified, Scooby hides under a steam locomotive engine, but the three traitors have other plans for him.  Turning on the locomotive sends Scooby down a trap door, tangling him up in a cotton spinning machine and separating him from the gang.  The loud locomotive engine also drowns out Scooby’s cries for help. 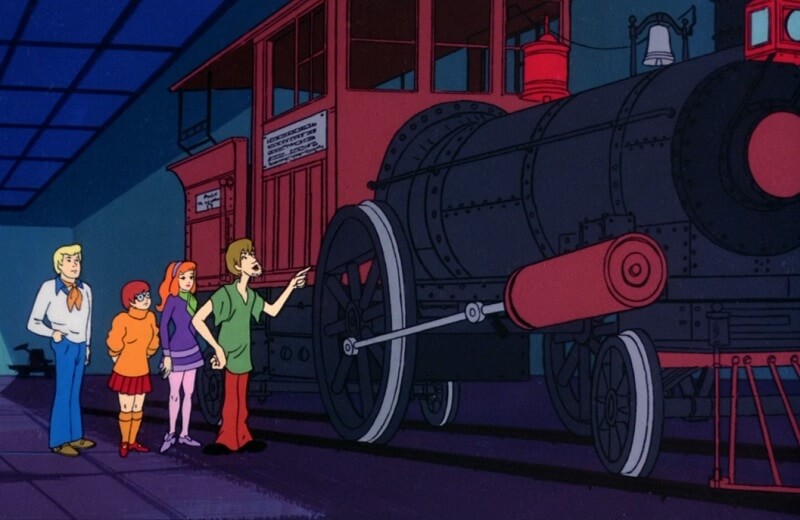 The gang explain to a friendlier Guard, named Mr. Clive, that Scooby is missing.  He says he’ll offer to help them, but also tells them that they have to hurry as it’s only a couple of minutes to closing time.  I don’t know about you, but I don’t think I’d ever lock up a museum and go home if I knew a dog was lost inside.

Everyone splits up and takes a look for Scooby, but nobody has any luck.  There’s a nice nod back to ‘What a Night for a Knight‘ as Daphne says she’s checked out the Dinosaur exhibit as Scooby loves bones.  Meeting back at the Steam Locomotive, the engine finally shuts off and they can hear Scooby calling for ‘Relp’.

Freddy discovers the trap door and they rescue Scooby from the Cotton Gin machine.  Unfortunately, because they are under the locomotive, the Guards can’t see the gang and assume that they are gone.  So they lock up the museum with the gang stuck inside for the evening. 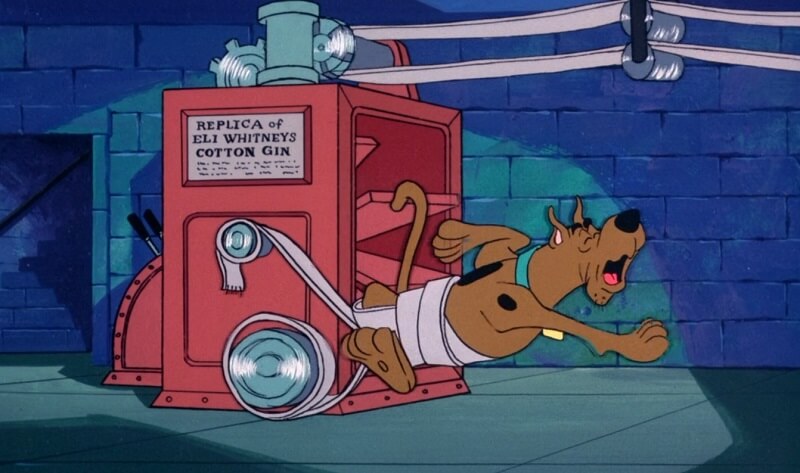 Before they even realize that they are locked in, The Gang come across an important clue.  They find the real wax dummies in their long underwear.  Meaning someone else snagged their uniforms. 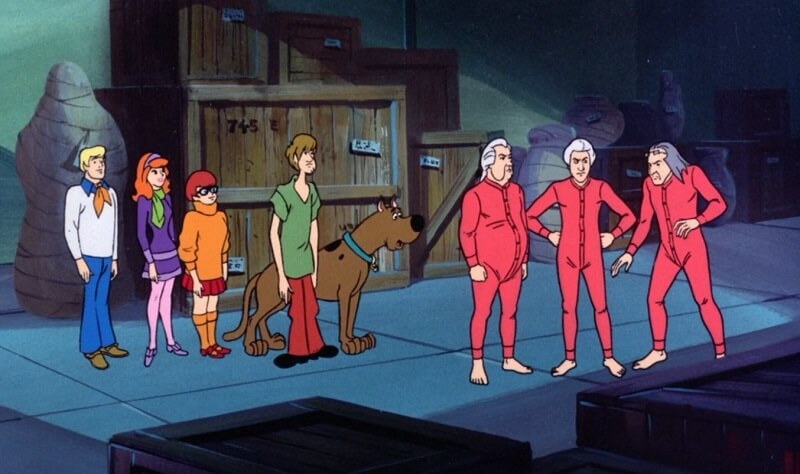 The ghost of Benedict Arnold locks the Gang in the basement, and we get a brief history lesson on who he is.  The gang then split up to look for a way out, as there are dozens of corridors in the basement.

Velma is the first to find a clue as she spots wet footprints, much like the grumpy guard had earlier.  Following the footprints, Velma, Freddy and Daphne come to a dead end, but the footprints seem to go past the wall they’ve come to.  They also see two of the ghostly traitors racing towards them.  Before they can investigate the dead end for a secret passage, they rush away from the spooky ghosts. 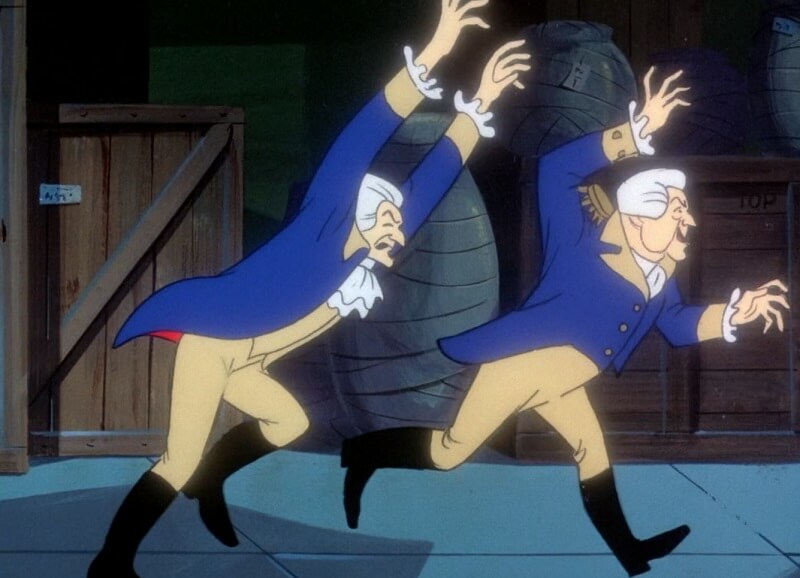 Scooby has a bit of luck as he finds a dinosaur skeleton and immediately gets to gnawing away at it.  I don’t think Scooby ever got the memo that dinosaur bones are actually fossilised and made out of rocks and minerals, but it\’s still funny nonetheless.  Destroying the skeleton (his second time since ‘What a Night for a Knight’, they are soon haunted and chased by the ghost of William Demont.

The gang reunite and find away back up to the main floor.  There, they run into the friendlier guard, Mr. Clive.  He tells the gang the the main door has a time lock on it, so there’s no way out until noon the next day (which is 16 hours away).  They then hear the steam locomotive fire up again, drowning out the quietness of the museum. 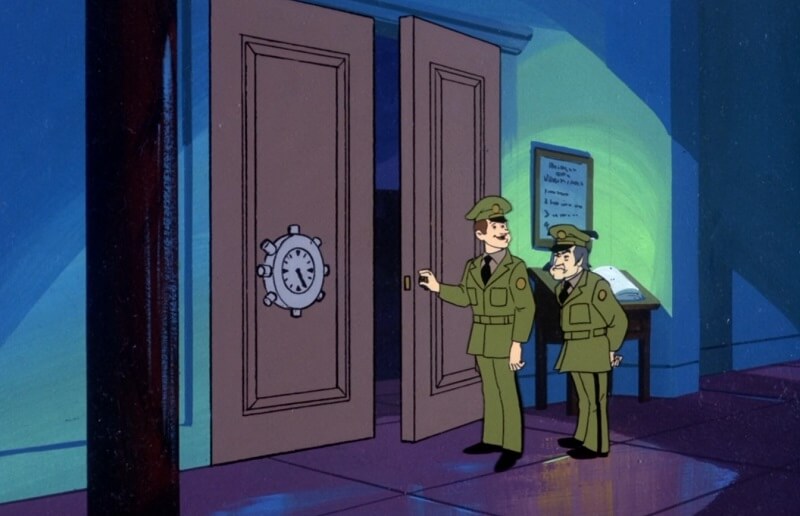 The grumpier security guard, named Mr. Grumper walks in explaining that the locomotive is acting up again.  He also explains the engineers will be here any minute, which isn’t a goof in logic as they are all locked in.

It turns out that Mr. Wilt, the engineer, sleeps in the museum at night as the locomotive is acting up so much.  We also learn Mr. Grumper is new on the job and bitter, as he used to have a day shift guarding the white house.   As Mr. Willit walks away, the gang see the same wet footprints they saw with Mr. Grumper.

The gang follow the footprints back into the basement, as if Mr. Willt claimed he slept inside the museum, then there isn’t any reason why he should have been outside.

In the basement, they realize that the locomotive is powering the cotton gin machine.    Following the belts to the machine, as well as some wet footprints, they come to the dead end once again..  Here, Scooby finds a lever on a suit of armour that allows the wall to turn. 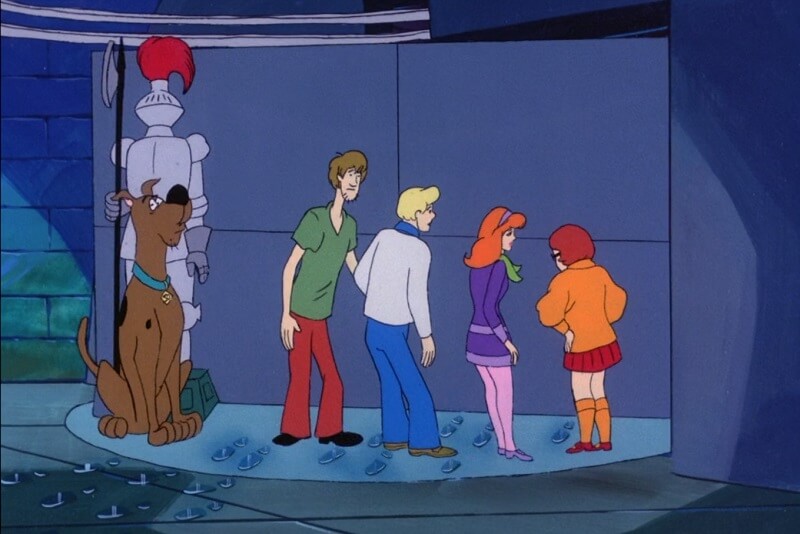 Following a flooded storm drain cavern, the gang come to a concrete wall with huge hole drilled in it.  The hole was drilled by a drill that seems to have been powered by the locomotive.   Here they discover bags of money that would even make Scrooge McDuck envy with jealousy. 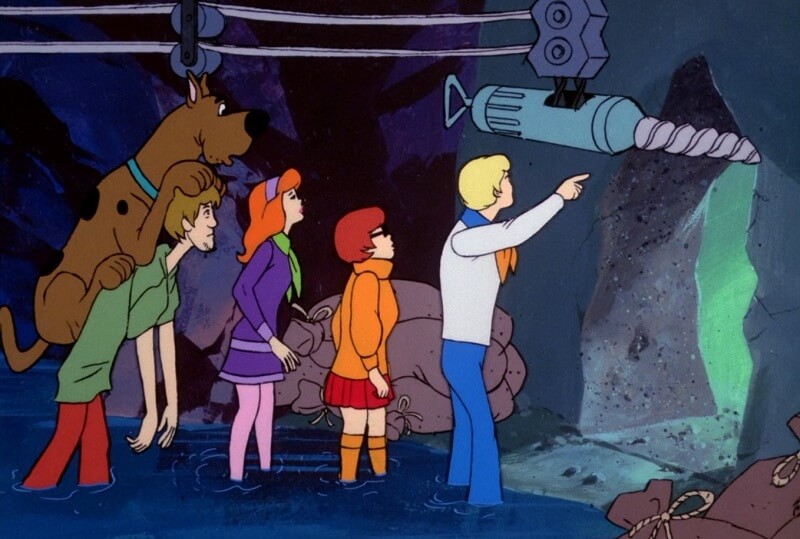 The gang enter the drilled hole and they find a printing press and more bags of money.  Here, they conclude, that they are in the US Mint as it’s only a couple of blocks away from the museum.

The gang spot the three ghostly traitors and a small chase ensues, until Scooby traps them underneath a wooden antique airplane (similar to What A Night for a Night). 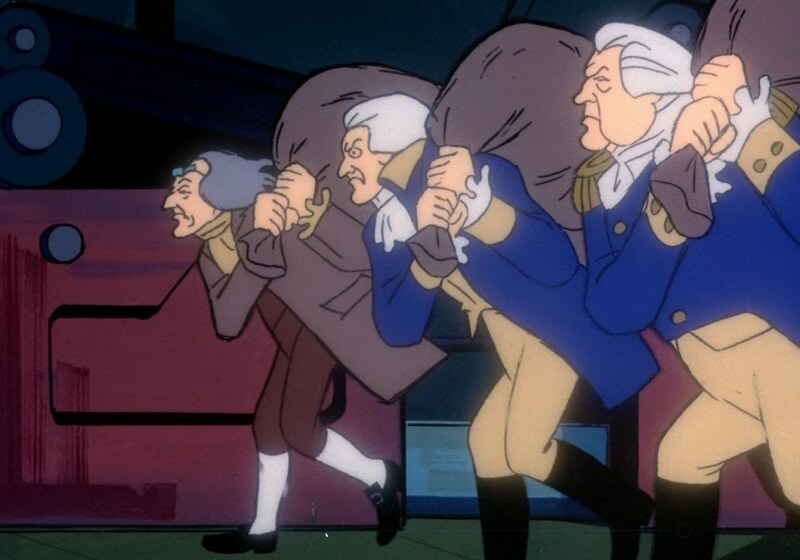 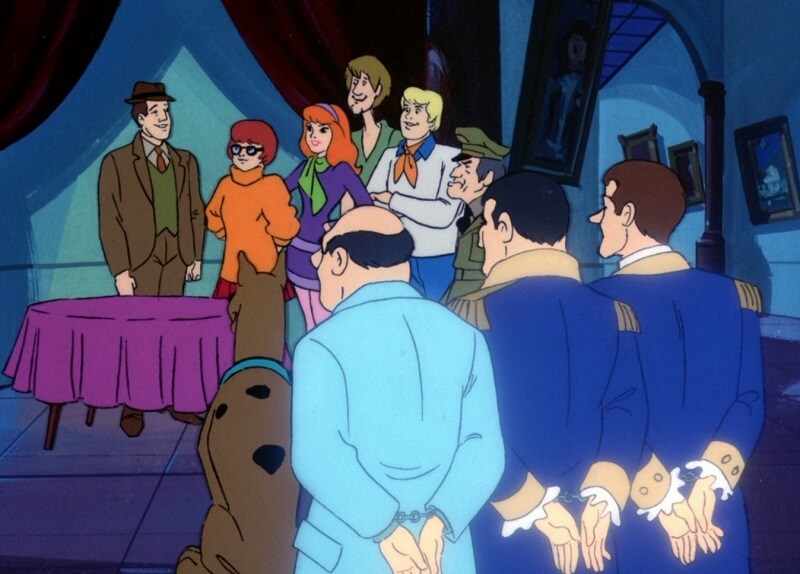 A government agent arrives and arrests the motley trio of traitor ghosts.  The gang explain that they put the real wax dummies in the basement, so when guards made their rounds at night, they’d think the museum was empty.  This allowed them to stay in the museum during the evening and work the drill using the Cotton Gin.  The locomotive was only to cover up the noise of the drill. 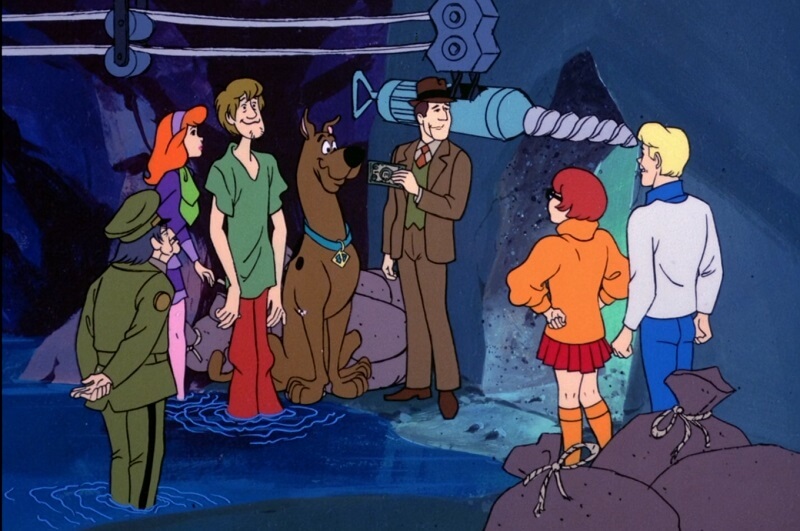 Mr. Willit confesses that he found old plans for the abandoned storm drain that ran all the way to the US Mint.  So he devised a scheme to rob it.  The mystery of Mr. Grumper’s wet footprints are also explained, as he stated his feet were always wet as he spent so much time mopping up the wet footprints that were always about.

Their entire ruse turns out to be worthless in the end, as the government agent explains the money they were trying to steal is completely worthless.  If you look at the image below, you can see the money is missing valuable signatures and stamps that make it valid as currency. 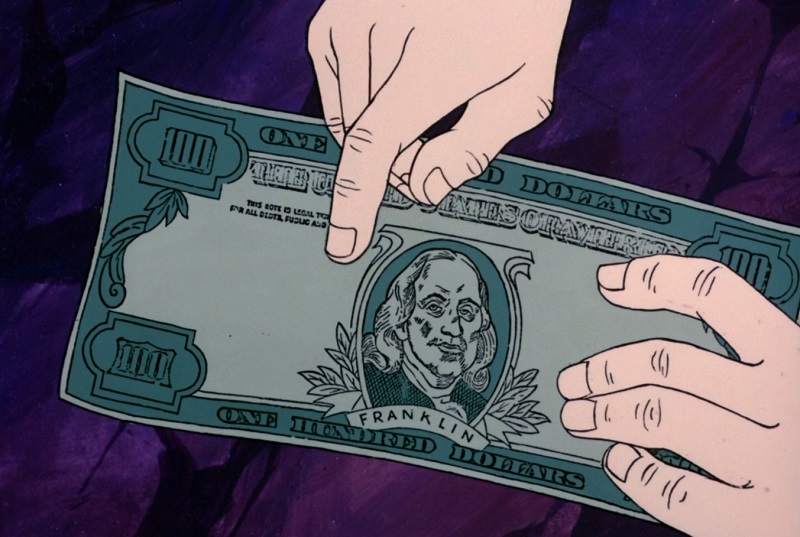 I really love this episode.  The historical setting is cool, and I enjoyed how the gang were locked in and could not leave.  The historical villains from America’s past is nothing new, after all we saw that in a Lochness Mess, but the design of the bad guys is kinda creepy, and they come across as rather spooky.

I also enjoyed the start where the gang are driving by all the cool landmarks.  With it raining so hard, nobody else was there, and the place was incredibly empty.  That scene really resonates with me and sticks in my memory.

The plot was also super cool.  I loved how Mr. Grumper made the perfect red herring while the friendly guard turned out to be the bad guy.  Very cool how they used the locomotive, and cotton gin machine to run a high-powered drill.  Fantastic stuff!