The No-Face Zombie Chase Case is the eighth episode of The Scooby-Doo Show, and it originally aired on October 30th, 1976.

This episode features a cool faceless zombie that shuffles along as it drags one of its feet. We also see the gang investigating a toy factory, so you know you’re in for a lot of fun.

Scooby and Shaggy are enjoying a 6-foot submarine sandwich at a sub shop, where Scooby witnesses a zombie with no face robbing the Main Street Coin Shop.  With thousands of valuable coins to steal, the Zombie only walks out with one. 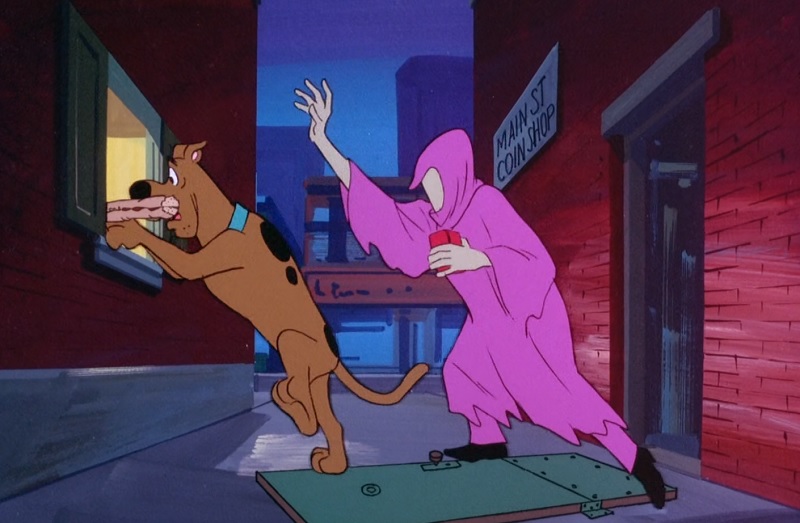 The gang tell the local police what Scooby saw, but the lieutenant finds their description of the Zombie a little too out there and tells them to go home and watch TV.  The coin shop owner adds to the mystery by explaining that the burglar stole the Golden Galleon. 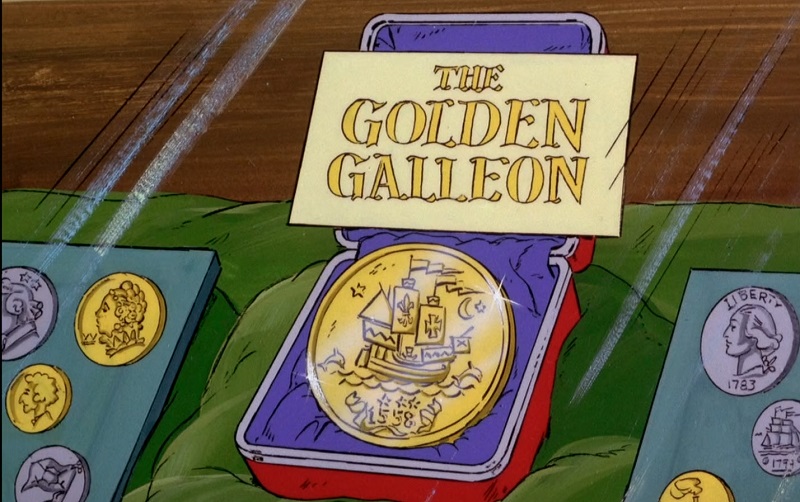 The Golden Galleon is a 16th century coin where over a hundred years ago, the owner placed a curse on the coin.  The curse states that there would be bad luck to anyone who possessed it.  The owner swore he would claim it one day, and his Zombie-like body has been roaming the earth for over a century to find it. 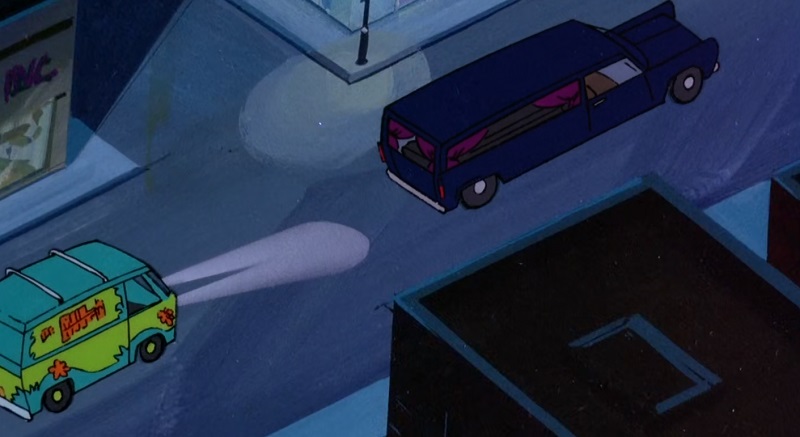 Leaving the scene of the crime in the Mystery Machine, the gang spot the No-Faced Zombie driving a hearse and follow it to the Dilly Dally Dolly Co – Toy Factory.  At the toy factory, they are greeted by the night watchman who tells them to get lost.  Thus, they end up sneaking in via an open window. 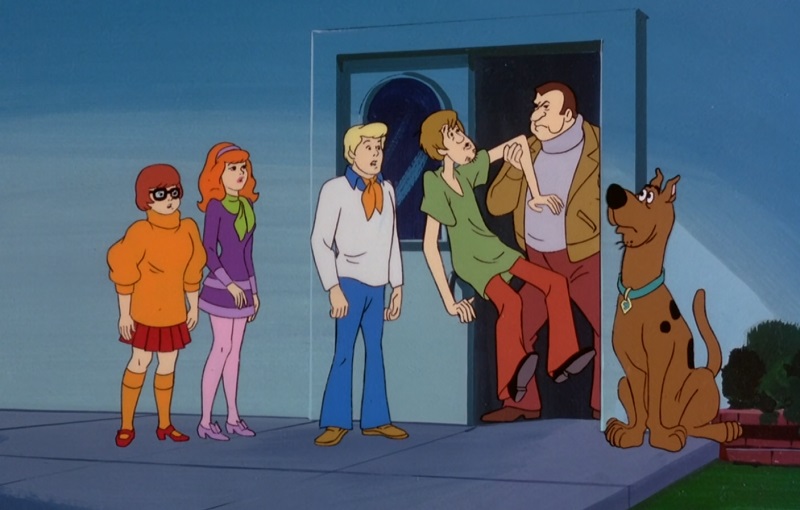 Never ones to do things quietly, the gang are quickly caught by the Night Watchman, as well as Mr. Dilly and Mr. Dally, the toy factory owners.

The gang explain their story to Mr. Dilly, and Mr. Dally and the gang are told to stay in the office while they go look for the Zombie.  During their search, Mr. Dally is grabbed by the No-Face Zombie and locked in a room.

Inside the office, Velma finds a magazine with three pages torn out.  This is their first clue that something fishy is going on. Before they can examine the magazine any further, the No-Face Zombie barges in and begins chasing the gang.  During the chase, they nab the Golden Galleon coin from the clutches of the Zombie.During the chase, they also encounter a second villain, a Giant Gorilla!  Escaping both of the goons, the gang phone the police and are told to wait there for the lieutenant to arrive.  Velma tells Shaggy and Scooby to head to the newsstand to find a copy of the magazine so they can see what three pages were missing.

Before leaving the toy factory, we see Scooby tumble into a duplication machine, and we end up with room full of dozens of Scooby-Doo duplicates. 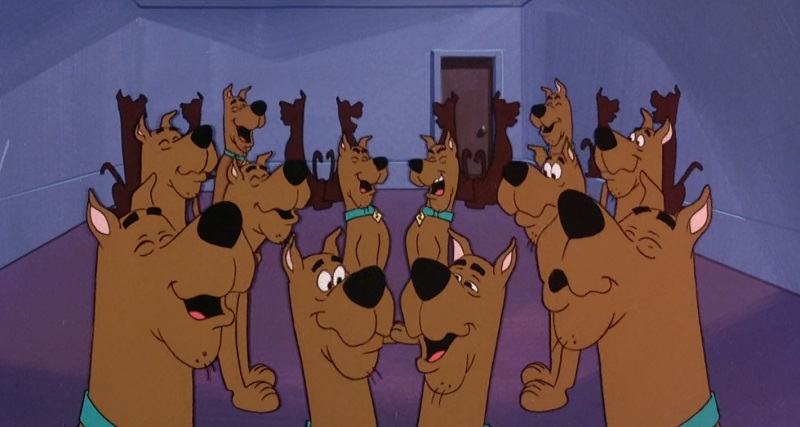 Unfortunately, the giant Gorilla follows Shaggy and Scooby to the newsstand and causes chaos, but the two of them make it back to the toy factory with the magazine, unscathed. 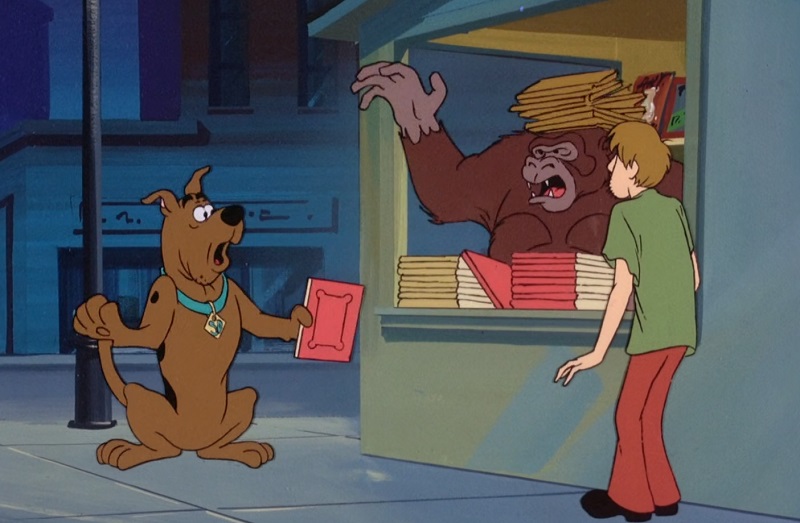 Meanwhile, at the toy factory, the Zombie manages to find Freddy, Daphne and Velma and swipe the Golden Galleon coin from them. Acting like dolls, Velma and Daphne manage to steal the coin back.

The entire gang reunite with the lieutenant, and as they give him the coin, the Zombie comes out of nowhere and once again steals the coin.  After  a short chase, they crash into the Zombie and realize that it was just a life-size robot toy. 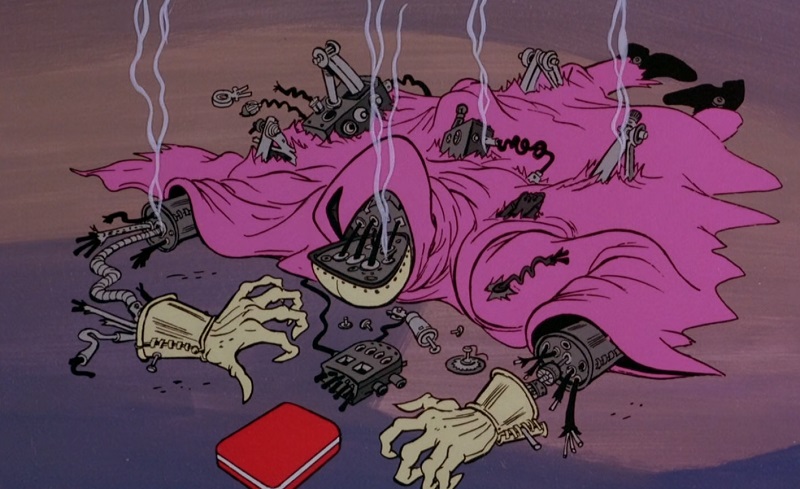 Picking up the coin, the Gorilla crashes in and steals the coin once more, but thanks to some quick thinking, Shaggy and Scooby trap the big Gorilla.

The Gorilla is unmasked, and it’s Mr. Dilly.  Mr. Dilly had read about the coin in a magazine article and found out it was worth a million dollars (a reward payed out by the Sultan of Swahili).  Programming his zombie robot, he made use of the zombie legend surrounding the coin’s curse.  The Gorilla was just an extra touch, as he needed a disguise to scare the gang out of the factory. 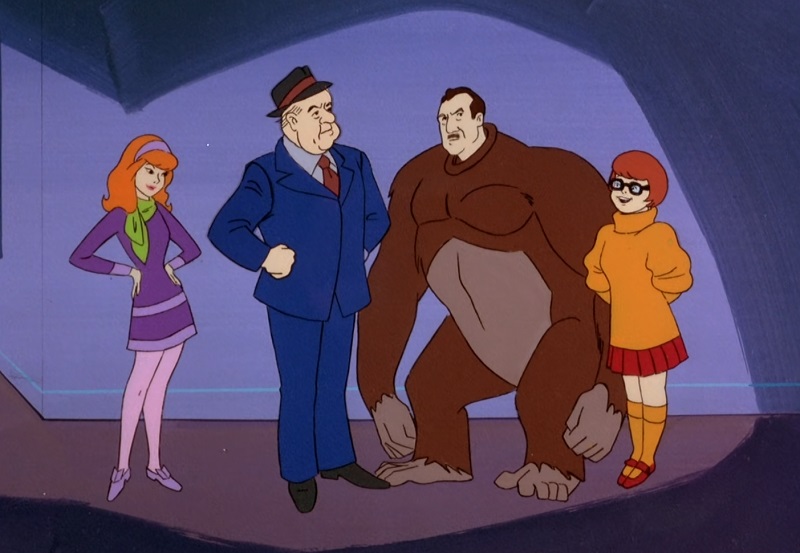 Mr. Dally and the Night Watchmen are safely found locked up in a room, and to reward the gang, Mr. Dally treats Scooby and Shaggy to whatever they can eat in the cafeteria.  Unfortunately, the dozens of Scooby-duplicates have beaten the gang to all the good food!

I like this episode, I really do, but I find it a bit flawed.  While I do love the way the No-Face Zombie’s lack of face looks, and how the Zombie moves, the Pink cloak is quite silly.  This pink cloak makes the No-Face Zombie seem very un-menacing.

Adding in the Gorilla is also kinda weak.   Gorillas running around all crazy in TV shows and movies was a big trend in the 70s, so maybe that\’s why they went with one here.  I think this would have been a stronger episode though if they just focused on the Zombie.

I found too that they didn’t utilize the toy factory atmosphere.  We do see some unique dolls out and about, but most of the episode finds the gang using a forklift, or in the main office and cafeteria.  I fell as if there was a lot of wasted potential here.  The episode is also quite thin on plot and most of it is just one giant chase scene as the Zombie and Gorilla steal the coin back and forth from the Gang.

What I did also like was the dialogue between the Gang and the lead Lieutenant, as well as the Night Watchman.  Their conversations were hilarious as the Gang tried to explain the No-Face Zombie to these two adults.  I sort of wish that this Lieutenant made more appearances in the Scooby-Doo show, as he actually works with the gang (and mocks them about their theories of Zombies and Gorillas), vs showing up at the end to drag the villain to jail.

The opening shot of the Zombie robbing the store is very cool. Lots of unique Theremin music in the score and the first 5 minutes are quite creepy. How I’d wish they\’d release the Scooby Background music on vinyl or CD! Even if he is decked in pink, the No-Face Zombie shows a considerable amount of strength as he bashes through doors. The reveal where he’s a robot is also creepy, and reminiscent of the movie Westworld.

This is still a fun episode, but I don’t think it reaches the high mark of The Harum Scarum Sanitarium that it shares its same season with.