Mamba Wamba & the Voodoo Hoodoo is episode #9 of the Scooby-Doo/Dynomutt Hour (or as we know it now, Season 1 of the Scooby-Doo Show). Originally airing on November 6, 1976, this episode sees the gang in Louisiana attending a concert where their old pal Alex Super is the lead singer.

This episode oozes the 1970s with the rock star costumes and classic rock songs. With his big glasses and shaggy hair, and garish stage costume, Alex Super certainly resembles Paul Williams from the Phantom of Paradise. At least to me. Although I suppose it could be argued that he’s a play on a young Elton John.

I wish they gave the band a name in this episode, but alas, all we know are their names. The fun only gets better when an ancient Shaman appears during the band’s show and kidnaps one of the band members in a puff of smoke. From there, the gang ends up at Lisa’s old plantation called Maison Dupree, where they discover voodoo dolls of both their pal Alex and his manager Roger.

We also get a Zombie, that is similar to the Zombie in Which Witch is Which. Again, the \’70s are in full force as this husky Zombie is wearing a nice but slightly torn up pink sweater. Twenty-eight years later, the Direct to Video Scooby-Doo! Frankencreepy pays homage to this episode by showing certain scenes to this fun episode.

Finally, we also get the voice work of Lennie Weinrib in this episode who went on to play Scrappy-Doo. As well, Mickey Dolenz, most famous for singing and drumming in the Monkees, voices Alex Super.

The episode begins with the gang attending a rock’n concert featuring their good friend Alex Super.  Scooby & Shaggy are enjoying a few sausages during the show, and frugal Fred is impressed they got in free as concert tickets are only $10.  Velma meanwhile states that Alex is a ‘doll’ but quickly backtracks, saying that he’s a doll for inviting the gang for free.

The rock band then goes into perhaps the worst rock song I\’ve ever heard.  Alex calls it an original song based on the Voodoo Chant called the Mamba Wamba.  But I call it pure trash.  It’s just Alex and Lila saying ‘doing the Mamba Wamba’ over and over again while Deke beats on some congo drums and Ray air guitars to nothing (as there’s absolutely no guitar to be heard).

It certainly made Mamba Wamba roll in his grave, as he appears and puts a curse on the band for violating the Mamba Wamba chant.  Disappearing in a cloud of smoke, he takes Lila with him as she vanishes into thin air. 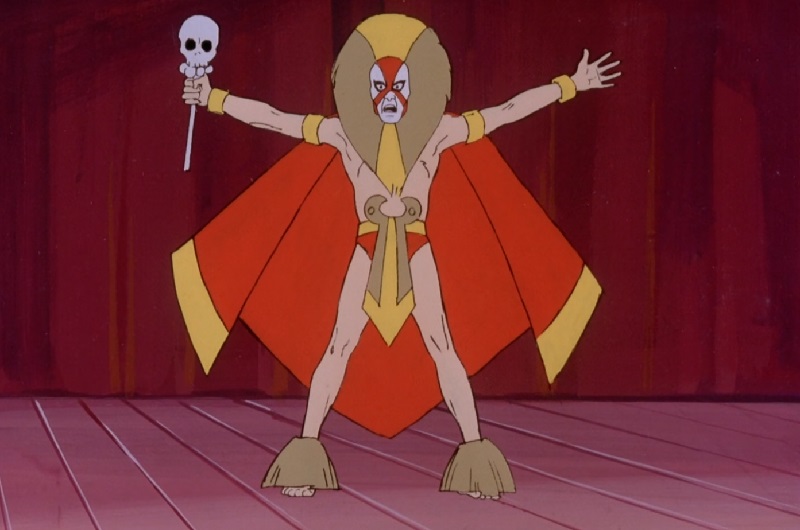 Backstage, a terrified Alex Super explains that Lila gave him a note before the show that reads, “do not play the sacred chant, or forever return to Maison Dupree, where you shall join the ranks of the living dead.”  We also meet Roger, the band\’s manager, who also insisted that they should not have played that song.

Maison Dupree, as it turns out, is an old plantation where Lila grew up.  It’s where Alex first heard the chant and decided to make a rock tune out of it.  Backstage, Velma also finds a voodoo doll of Lila and says it means that the Voodoo Priest intends to make Lila a Zombie

While acting as Roadies, Shaggy and Scooby begin setting up the band\’s equipment.  Trying to find an outlet that will support the amperage of the guitar and amp, they run into a zombie. 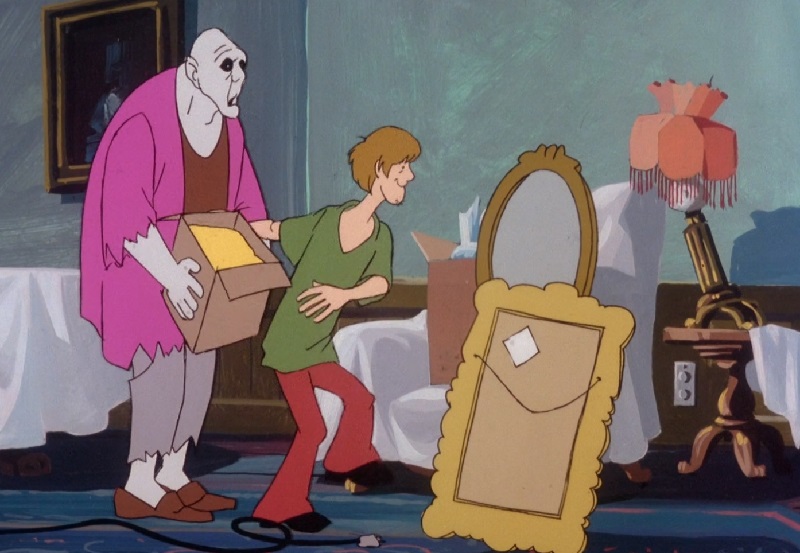 Running back to the gang, Freddy decides that they need to split up and look for clues.  Naturally, it doesn’t take long for Shaggy and Scooby to run into Mamba Wamba, who tosses a voodoo doll of Roger (the band manager) at them before vanishing into thin air to the sound of voodoo drums.

Returning to the rest of the gang, Scooby shows Velma the voodoo doll, and in a panic, Roger runs off into the bayou.  Both the gang and the band run out in search of him and find Roger\’s hat in a stream.  They all run back to the house as they hear a scream from Lila.

Voodoo expert Velma states that a ritual ceremony has to occur for Lila to be transformed into a zombie, so Freddy splits up everyone to look for clues once again.  In a weird twist of fate, Daphne and Alex go off together (I bet Freddy and Velma aren’t happy about this!) and are caught by Mamba Wamba and his Zombie henchman in the basement. 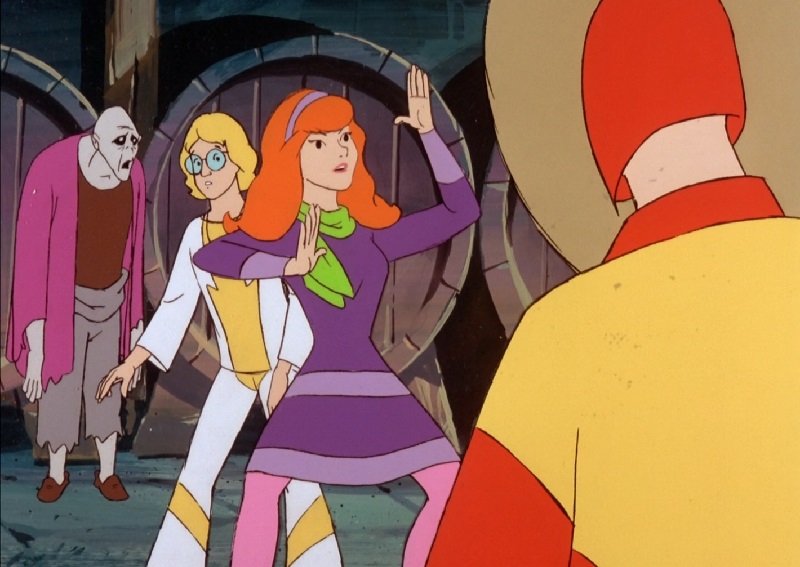 Daphne fakes some awkward kung-fu skills, and while her back is turned, Alex and the Zombie vanish, while Mamba Wamba laughs and disappears into a cloud of smoke.  All that remains is a voodoo doll of Alex Super. 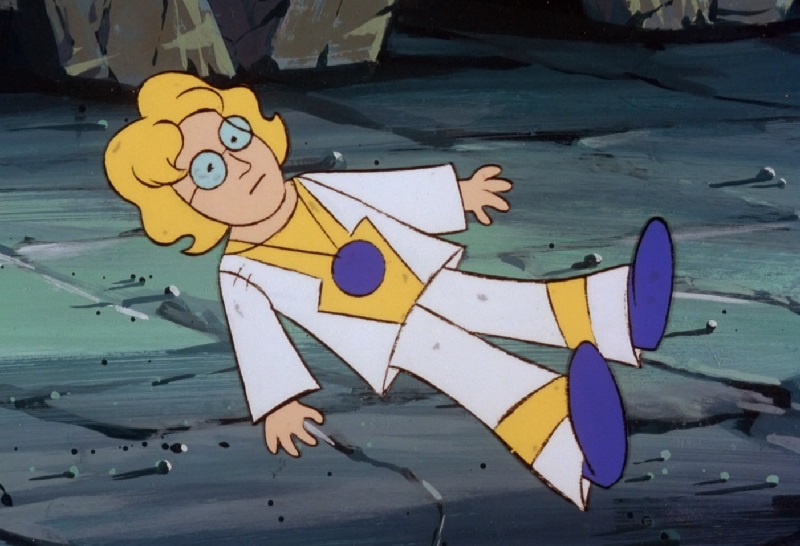 Shaggy and Scooby have a run-in with the Zombie, and after a small chase, the entire gang is reunited.  Hearing the Voodoo drums once more, Velma wonders where Ray and Deke are.  Her question is soon answered as they find voodoo dolls of both Deke and Ray on a fireplace mantle.

For a third time (in 10 minutes), the gang split up once more.  Shaggy and Scooby head outside, while Freddy, Daphne and Velma hunt for Mamba Wamba in the basement.

In the basement, along with hearing Voodoo drums, Freddy, Daphne and Velma find a secret passage.  Using brute force, Freddy breaks the door down, and they enter the underground passage

Outside, Shaggy and Scooby encounter a playful bullfrog as they try to distance themselves from the sound of Voodoo drums.  During their adventures, they come across Mamba Wamba and the zombified Lila beating the drums. 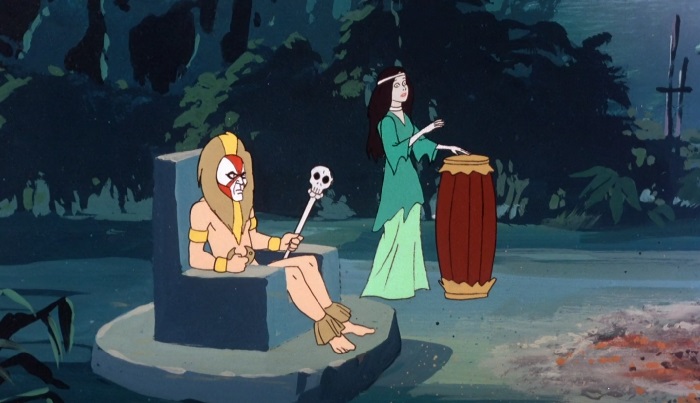 The rest of the band are tied up, and Mamba Wamba demands they sigh a parchment (in blood) that they’ll never play the Mamba Wamba sacred chant again.  Zombie Lila begs Alex to sign it, saying that she refused, and now look at her, she’s a zombie! 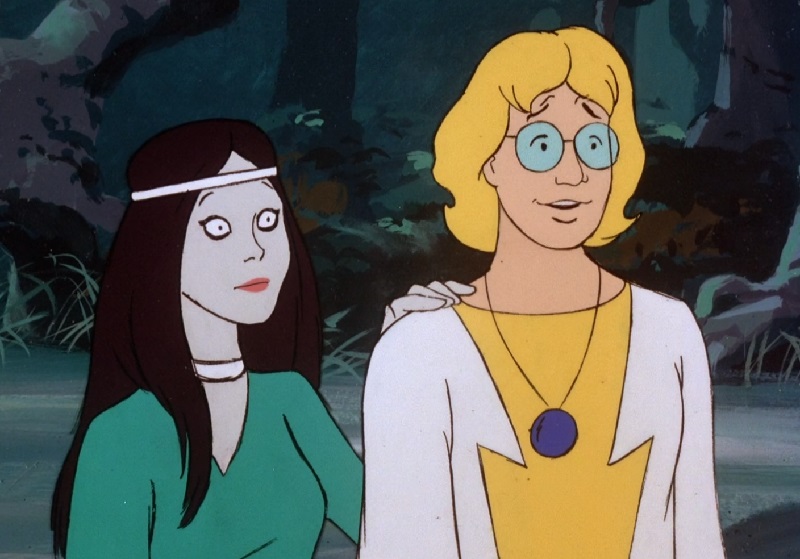 Alex is the first to sign, but the clumsy Scooby and Shaggy fall through a hay roof, causing a commotion.  In the mix-up, the bullfrog makes off with the signed contract.

Everyone chases the bullfrog into the bayou, but in the tall grass, the parchment is hard to find.  Eventually, Scooby and Shaggy are able to snag it and make their way back to the gang where they untie them.  While running away from Mamba Wamba, Scooby and Shaggy take cover in the secret passage that Freddy and the girls have emerged from. 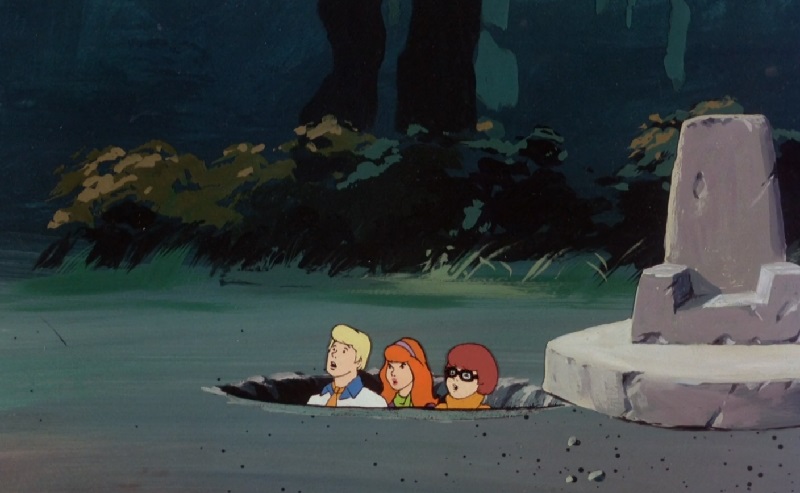 Back at the Maison, Freddy creates a trap to catch the trio of Voodoo Hoodoos.  For the first time, in a long time that I can remember, the plan goes off without a hitch.

Captured, Mamba Wamba is the first to be unmasked, and it turns out to be band manager Roger, while the Zombie is just a random henchman.  Lila, of course, was faking the whole thing and pretending to be a zombie.

Freddy explains that the demo Alex made for Mamba Wamba was destined to be a big hit that would go on to make millions.  (Sure, well maybe, I guess Disco made millions).    So Mamba and Lila faked the whole voodoo curse and tried to get the band to sign the song rights over to them by getting their signatures on a disguised but legit contract form.

Inspired by the voodoo dolls, Alex then has a brilliant idea of manufacturing dolls of the band.  Hey, it worked for KISS!

With another mystery solved, the gang and the band sit down to enjoy some Crawdad (another word for Crayfish) Gumbo at Maison Dupree.

I give this episode a 8.5 out of10.  This is a nice turn from the Ghost of the week, and I enjoyed how it featured Zombies and a Voodoo Priest.  The opening concert footage scenes are fun, and Maison Dupree is downright creepy.  I wish they spent a little more time in this creepy house.

The plot is interesting, too, although I wish they spent a little of their budget on getting an actual musician to write a decent song.  In 1976, kids certainly knew what good rock music was with bands like Alice Cooper, KISS, Bowie, Elton John, Led Zeppelin, & the Who putting out classic after classic.

Mamba Wamba is kind of scary as he’s aggressive, in that he does more then laugh, but that Pink Zombie… Yeesh, what a let down.  I think if we just stuck with Mamba Wamba, and made him a bit more intimidating, we’d have a 10/10 here.  This is certainly an episode I’d like to be seen remade into a feature cartoon!

Well, that wraps up another mystery!  Until next week, stay spooky!

A Bum Steer For Scooby