The Fiesta Host is an Aztec Ghost is the second episode of the Scooby-Doo Show and originally aired on September 18, 1976.

In this episode we find the gang in Mexico where they have driven over in the Mystery Machine. In Mexico they plan on attending a fiesta, but when they get there, everyone has been scared off by the Ghost of Katazuma and his wandering stone statue buddy.

I’ve got no trivia for this one, other than I learned what a Chuckhole was (it just so happens to be a pothole), so let’s get on with the review.

The Fiesta Host is an Aztec Ghost – Episode Review

The episode begins with the gang driving in Mexico on vacation. They are headed towards a Mexican Fiesta when they hit a ‘chuck hole’ that’s 15 feet long. Zooming out, we soon realize that they are standing in a giant footprint. 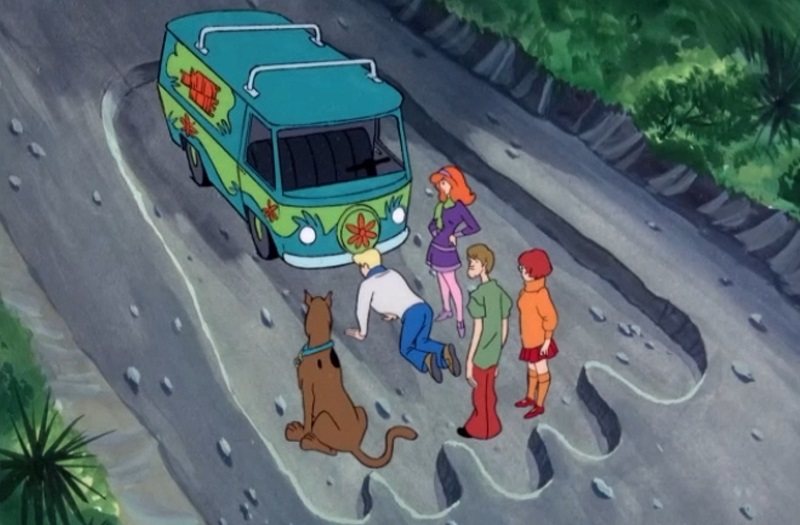 Freddy and Velma think Shaggy and Scooby are imagining things, and the axel is okay, so the gang take off to Cinco. As they drive off, a giant laughing spirit appears in the sky. 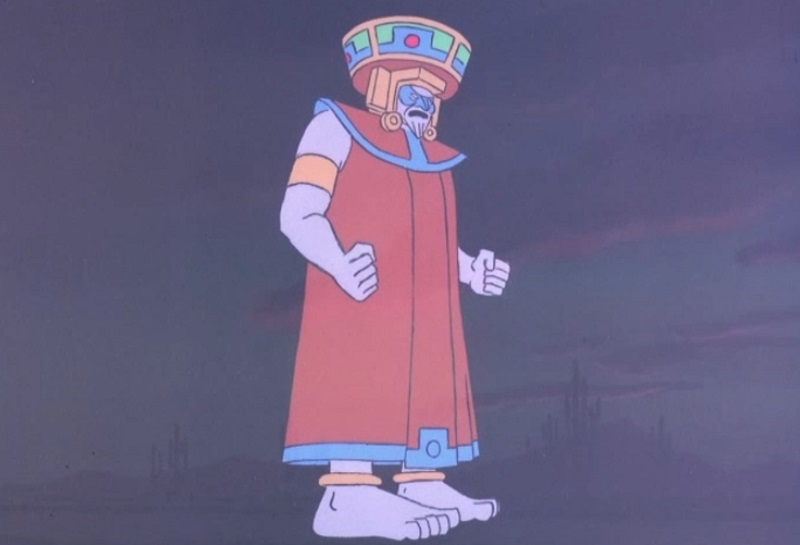 When they arrive in Cinco, the town is empty. The gang head off into the El Porta Hotel, where it too is deserted, and while fetching the luggage, Scooby encounters the living statue of an Aztec God. 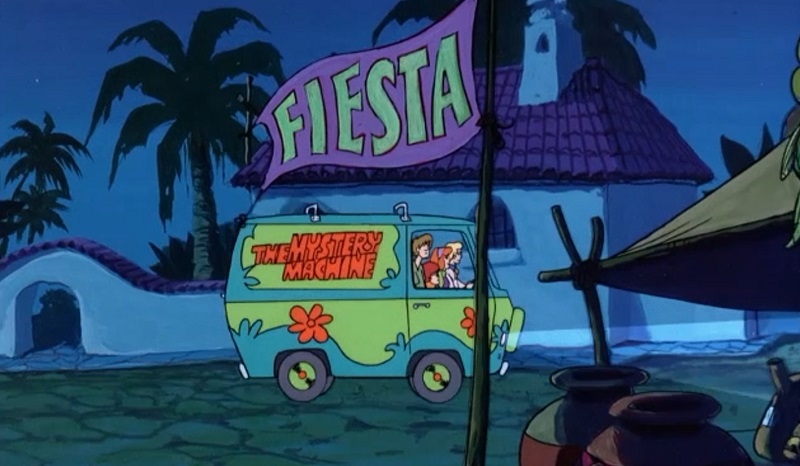 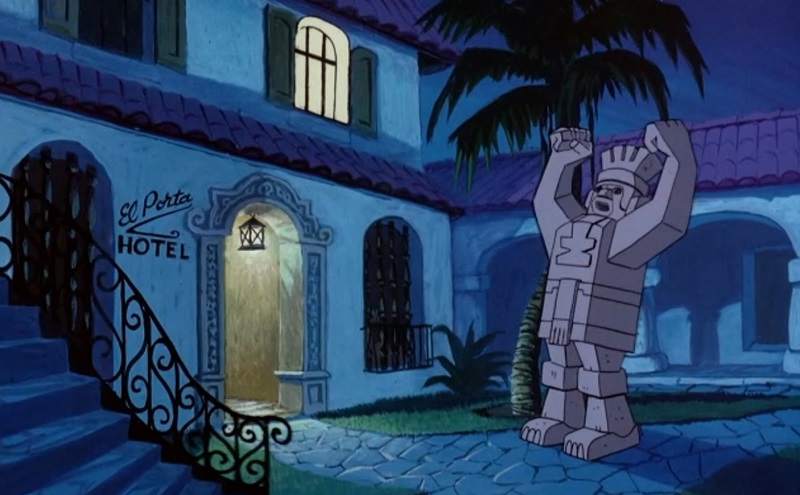 Inside the hotel they meet Juan Martinez, the hotel owner. Juan tells them that the great ghost king Katazuma has scared everyone away. Juan has even seen the ghost, and explains it’s 50 feet tall with large red eyes and a sinister voice. 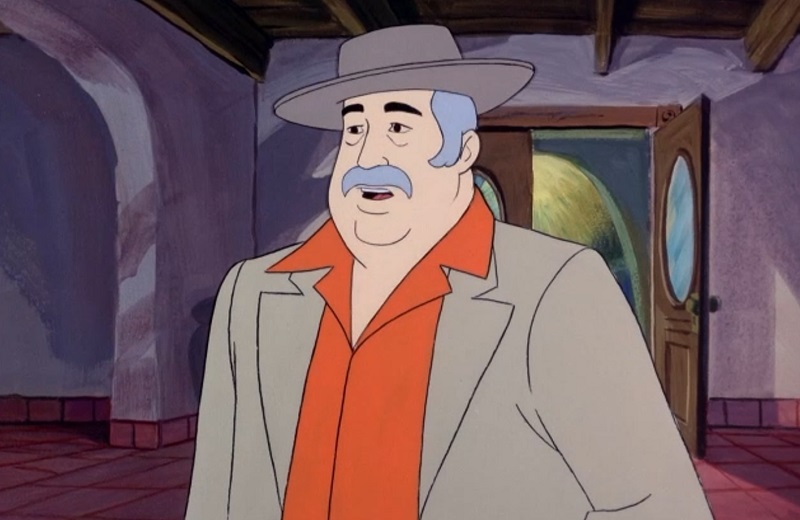 Juan also tells them about a phantom barge that carries the ancient gods, and disappears before your very eyes.

As the gang try to sleep, Scooby and Shaggy have a run in with the Aztec God statue. The chase continues until they run into Professor Stonehack and his wife Elina Stonehack. Professor Stonehack is an archeologist and he claims they unearthed the ghost of Katazuma while entering his tomb at the Aztec pyramids. 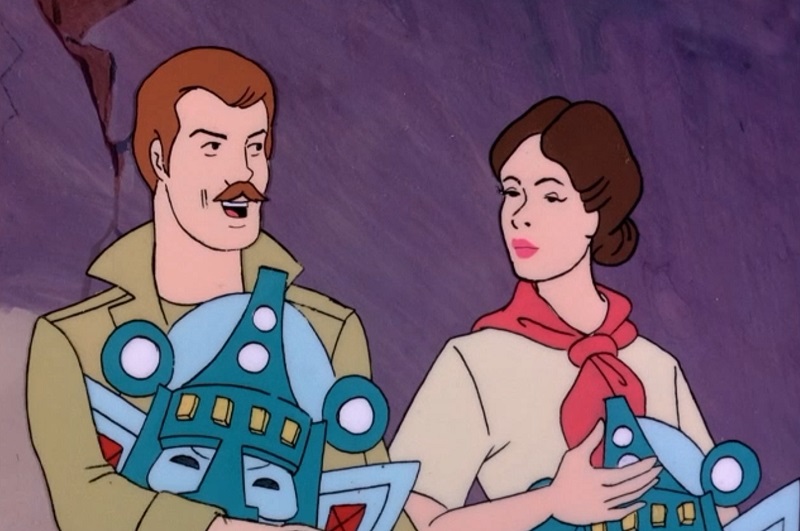 Ever since, the Ghost of Katazuma has been roaming the countryside, frightening everyone, and cancelling the Fiesta. The Stonehacks are taking the riverboat out of town tomorrow and suggest the gang join them.

Velma comments on how expensive the Stonehacks’ masks look, and Professor Stonehack exclaims the masks are cheap knockoffs.

Everyone goes back to bed, but while looking outside, the gang watch Professor Stonehack disappear at the foot of Katazuma. We also see another footprint left behind.

The gang decide to head to the pyramid to search for clues, so everyone gets on a boat to head up river.

In order to do such, they meet a mysterious hermit who allows them to borrow his boat. On their way up river they encounter the phantom barge which disappears the second it was going to crash into them. 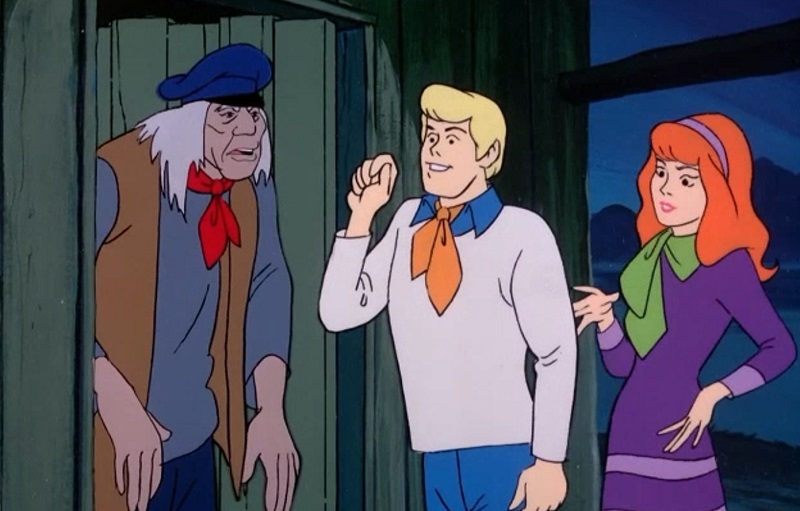 At the pyramid, they find more gigantic footprints along with the ghost of Katazuma who demands they leave. The stone statue has also followed them, and takes chase. 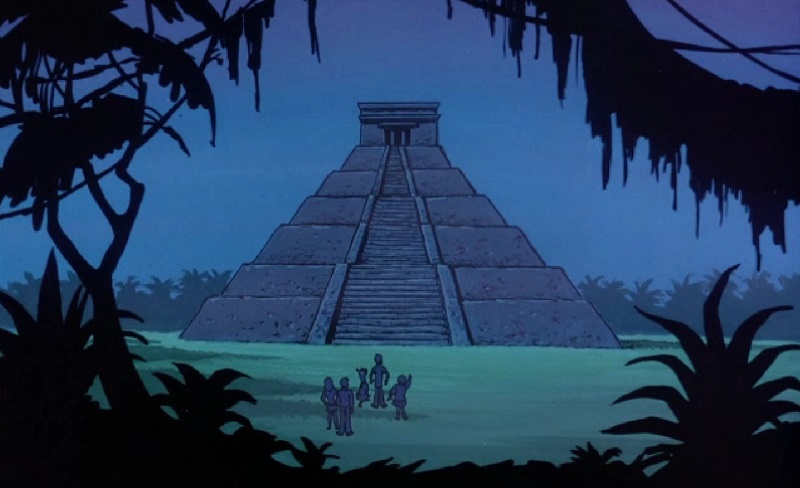 Everyone finally makes it to the pyramid, where Shaggy discovers the secret passage inside. They also find the pyramid has been renovated with electricity and has a modern light switch.

Splitting up, the gang look for clues where Freddy discovers a movie projector. Shortly after, the regular sized Katazuma shows up and takes chase after Freddy and the girls. 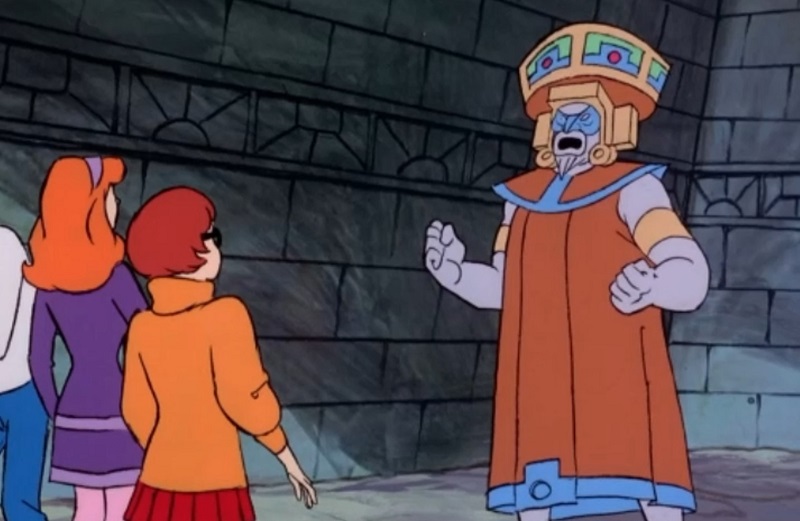 Shaggy and Scooby find a vacuum cleaner, which is unusual, and testing it out, the vacuum cleaner starts making fog. The stone statue also shows up and gives them a chase where Scooby digs an escape tunnel which brings them to Freddy and the girls. 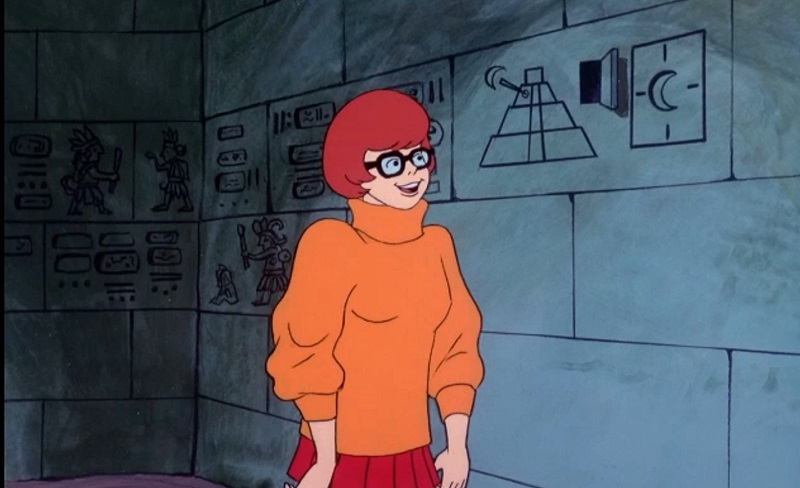 Everyone heads into an empty treasure house where they are trapped by Katazuma. On the wall, Velma finds an inscription where she finds the instructions to the secret exit. Using the power of the moon, the gang escape only to discover the Phantom Barge outside, and the two ghosts loading it up with more jewels and valuables from the pyramid. 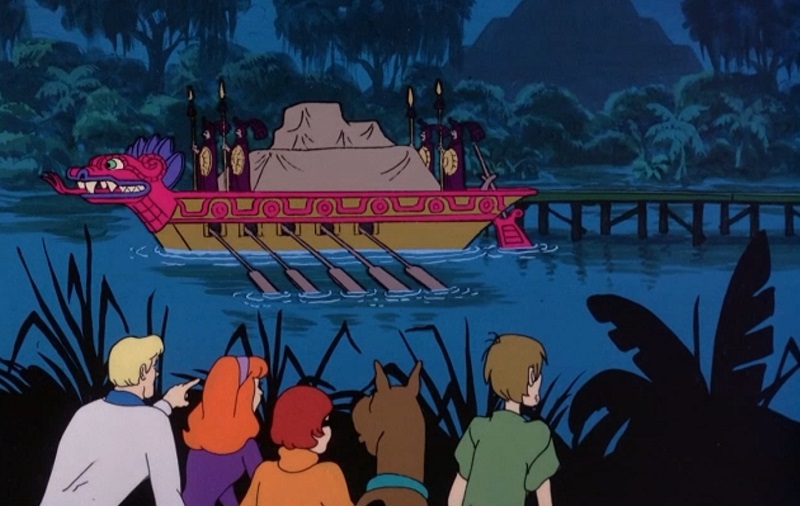 The gang sneak on to the barge where they find that the barge disappears into a secret channel built into a bridge. Putting on some of the masks found amongst the treasures, the gang give the ghosts a taste of their own medicine and chase the frightened bad guys. 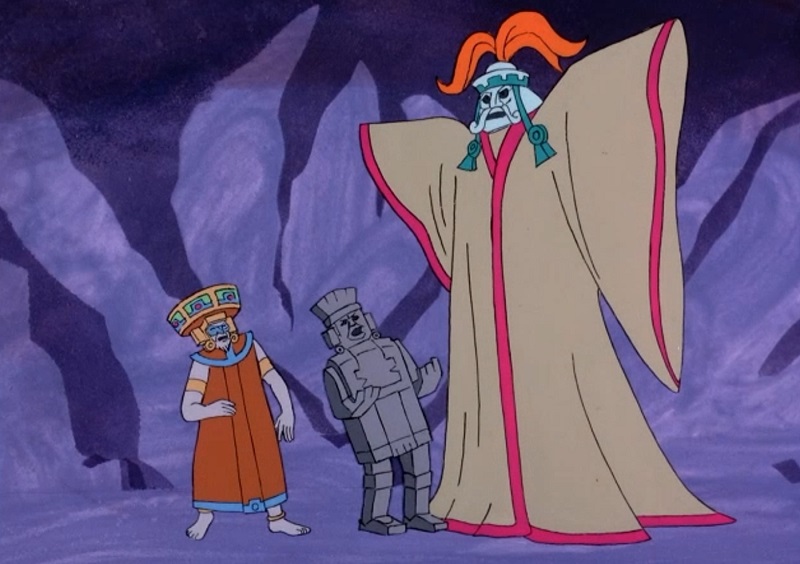 The plan fails, but Freddy comes up with a new plan which eventually knocks the bad guys into the water where it’s revealed to be Professor Stonehack and his wife. 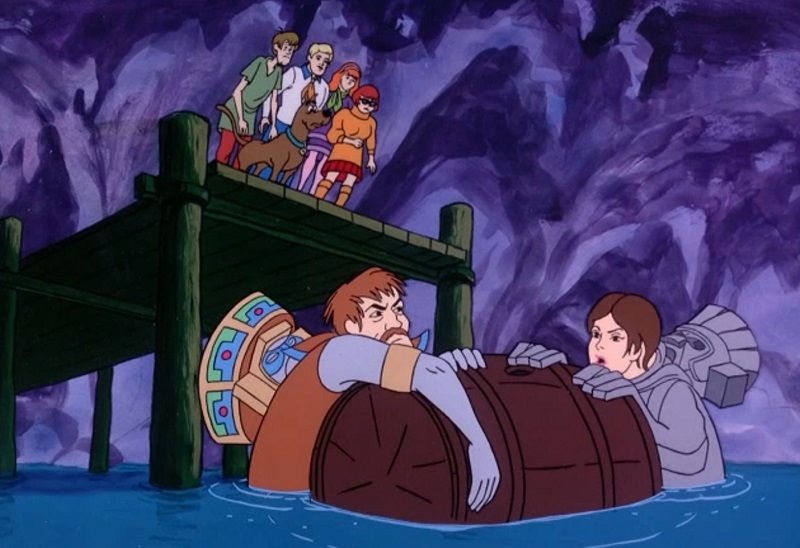 We then get a nice wrap up as the gang and Juan, the hotel owner, sit down for a meal. Freddy reveals that the vacuum cleaner made fog so they could project the ghost onto it. After scaring everyone away, he snuck jewels out of the temple onto the phantom barge.

I enjoyed this episode a lot, particularly the change of location, and the adventure element, it’s just that the ghosts didn’t do all that much for me. I didn’t find them all that intimidating or scary, and the plot of projecting ghosts onto a cloud of smoke was somewhat recycled.

The Phantom Barge was a neat idea, but not much time is spent with that concept.

What I did enjoy was the kids spending time in Mexico particularly their ride in and seeing that cool shot of the Mystery Machine in the giant footprint. (although it’s never explained how the professor made those giant footprints). I also enjoyed their time in the temple, and how they had to use all their skills together to escape.

The hermit was cool as well, but that character only gets 30 seconds of screen time and is used more as a last minute red herring. Still, I’m grateful they made him super interesting and quirky.

Overall, this is middle of the road Scooby-Doo, but at 22 minutes long it moves at a brisk pace, and I was never bored.

Well that wraps up another mystery, join me next week when I will be covering Watt A Shocking Ghost.