High Rise Hair Raiser originally aired on September 11, 1976, and is episode 1 of the Scooby-Doo Dynomutt Hour, or as we now know it, the Scooby-Doo Show.  Strapped for cash, our teenage gang decides to get jobs on a construction site where they stumble upon the mystery of Ebenezer Crabbe, a 180 year old cloaked spectre.

Directed by Charles A. Nichols, High Rise Hair Raiser kicked off the Scooby-Doo Show with a bang.  This episode features everything you’d want to see in a Scooby-Doo episode, such as hi-jinx on a construction site, a creative and fun villain, Daphne and Velma doing some intense library research, as well as an intriguing plot.

The episode begins with a bunch of construction workers working late on a construction site.  That is until the Spectre of Ebenezer Crabbe appears and scares everyone away! 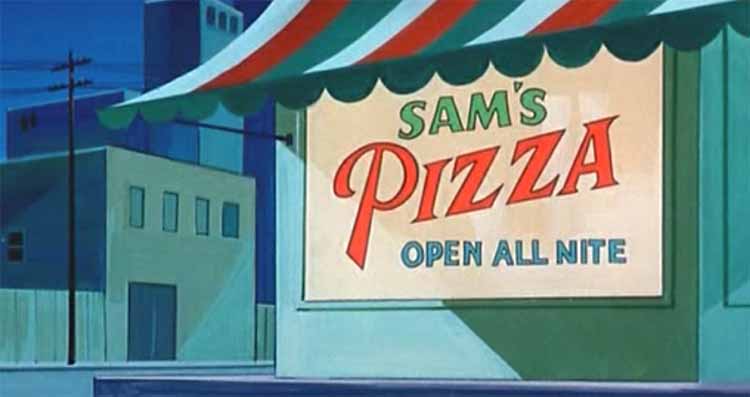 Meanwhile, at Sam’s pizza, the gang figure out that they are low on funds, so they decide to hit up the help wanted section.  There they see that a construction job is available.  Ah yes, the 70s, where gasoline was leaded with toxins, and teenagers in high-school could work past midnight on a high-rise skeleton with next to no training or safety equipment.

Also, at the Pizza Parlour, they learn about a recent rash of mysterious safe robberies.  All of the crimes were committed as if they burglars knew the combinations. 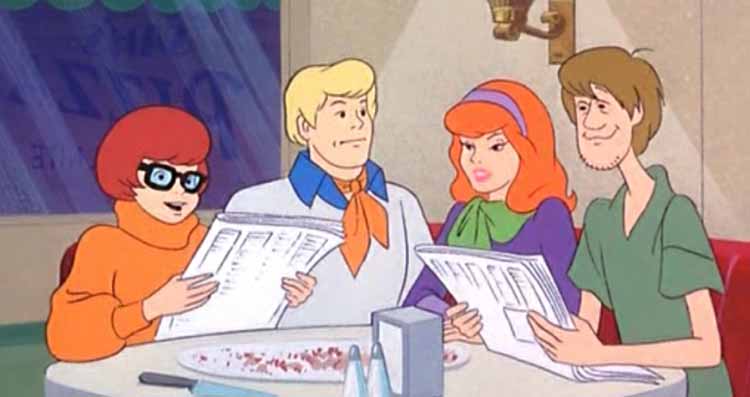 At the construction site, the gang go talk to the ACME Construction Company owner, Mr. Doherty.  Mr. Doherty explains his night crew has quit as a Spectre has been haunting the building.  The reason, he suspects, is that the building site was once the home to a haunted house, which has been moved to a new location. 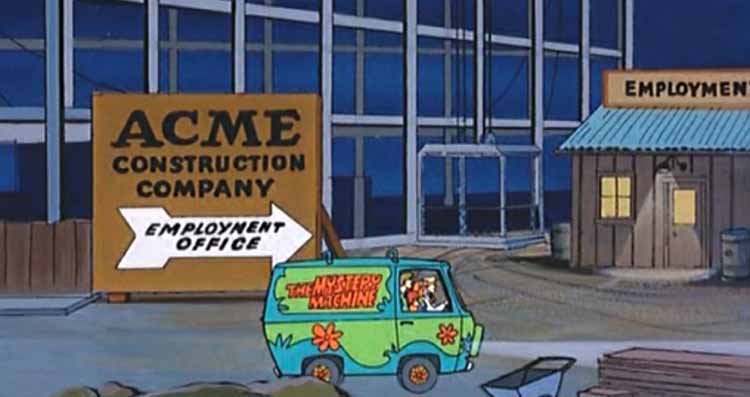 Shaggy, Fred and Scooby get to work training, while Daphne & Velma head off to the newspaper library to research the haunted house.

High up on the high rise (the 19th and 20th floors), Jim Rivets and Red Sparks show the gang their job duties.  As Shaggy and Scooby get to work, the Spectre appears and gives the two of them a good scare. 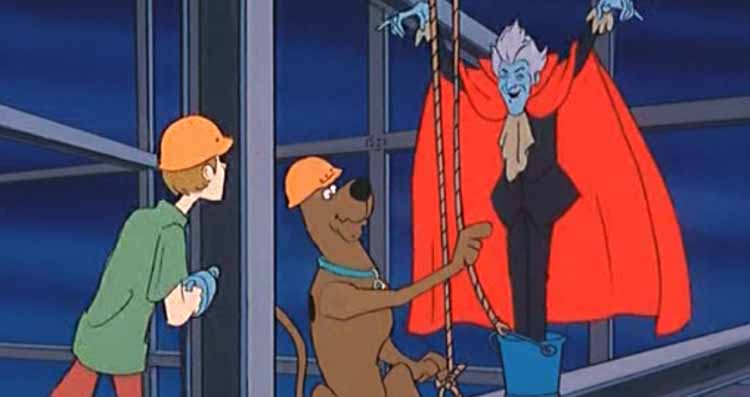 Meanwhile, at the Daily Times library, Velma has found a newspaper article about a man named Ebenezer Crabbe who was accused of Witchcraft as after 50 years, when he first moved into his home in 1820, he never seemed to age.  Then in 1876, he  vanished off the face of the earth, but returned home every 20 years to get younger again.  Since Ebenezer’s home has been moved, it\’s no wonder he\’s confused and haunting the wrong building.

Daphne does the math, and figures out that Ebenezer is 180 years old.  Together, with this new information, Daphne and Velma head back to the construction site to inform Freddy, Shaggy and Scooby of their news.  From there, Velma, Shaggy and Scooby decide to visit the Ebenezer’s old house.  Meanwhile, Daphne and Freddy stay on site to search for more clues.

Arriving at Ebenezer\’s house, they are greeted by his great, great, great granddaughter, Nettie Crabbe.  She lets them in the house to allow them to look around.  Nettie informs them that Ebenezer is due to return any moment, but they’d both be delighted to have them make themselves at home.

Going upstairs, Shaggy and Scooby find a book on Black Magic, and accidentally turn themselves briefly into monsters. 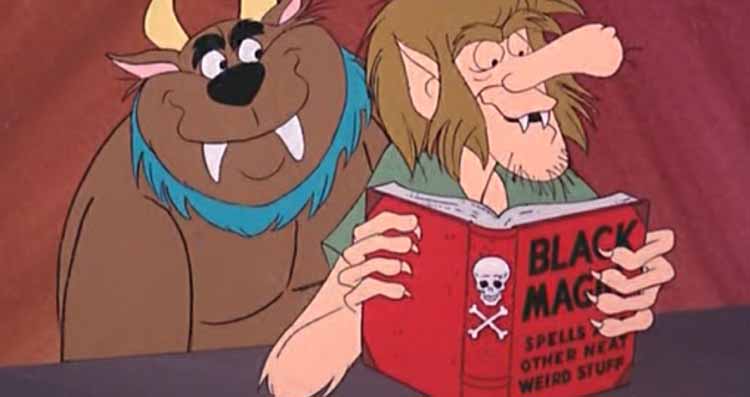 Velma finds an old trunk, and finds a piece of paper inside it.  Before she can look at it, Nettie walks in and invites them for tea.  The gang politely decline and run out with Velma’s clue.

Back at the construction site, the gang tell Mr. Doherty about Nettie.  Instead of being angry that the gang aren’t hard at work, Mr. Doherty is confused over the fact that they saw Nettie, as she’s been dead for at least 50 years.

Velma then shows the rest of the gang the piece of paper she found.  It’s a receipt for an expensive telescopic lens bought by Ebenezer Crabbe a couple of months ago.  So they head off to the Optical Lens Company Inc from where it was bought.

At the store, Mr. Speck, the owner, tells them that this lens is not only telescopic, but lets the person use it at night as it makes whatever is in view look like it’s daytime.  Mr. Speck calls it a Telescopic Spotter Lens as it allows you to see things in the dark.

The gang borrow the Telescopic Lens to bring to the police, but on the way there, they are frightened out of the Mystery Machine by the Spectre.

Shaggy and Scooby take cover in a bakery, but the telescopic lens is stolen out of their hands.

Back at Sam’s Pizza, the gang read in the newspaper that another safe robbery has occurred.  Daphne notices that the construction site is in the dead centre of the robbery locations.  At this point, Freddy and Velma have figured out what has been going on. 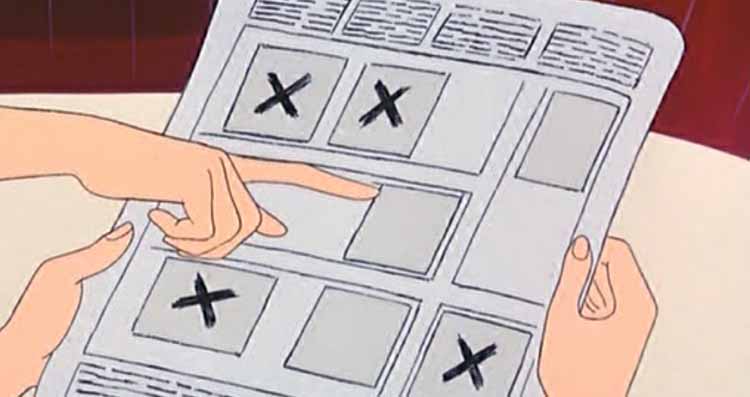 The gang head back to the construction site and attempt to lure Ebenezer Crabbe into a trap.  Nettie also shows up to the creepy party, and the trap backfires.  In the end, thanks to a fresh cement spill, Ebenezer and Nettie are literally stopped in their tracks. 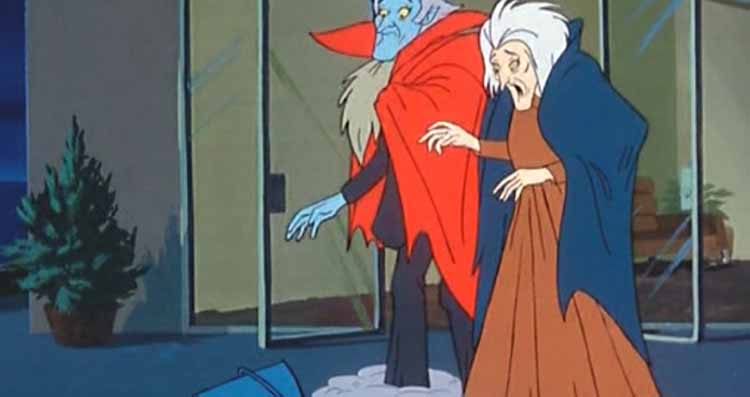 Unmasking the two spectres, it turns out that Red Sparks, the construction worker, is Ebenezer, and Jim Rivets is Nettie.  During the night, they had been using the telescopic lens to watch people open their safes.  From there, they\’d sneak into the buildings and rob the safes using the combinations they witnessed.

They used the ghost story to slow down construction, as the progress of the building was blocking their view of the safes.  While demonstrating the telescope to the police, by showing the Mahoney Baloney company safe, Scooby accidentally finds all the stolen money in a plant.  To reward Scooby for finding the money, the police treat Scooby to a Pizza shaped like a police badge. 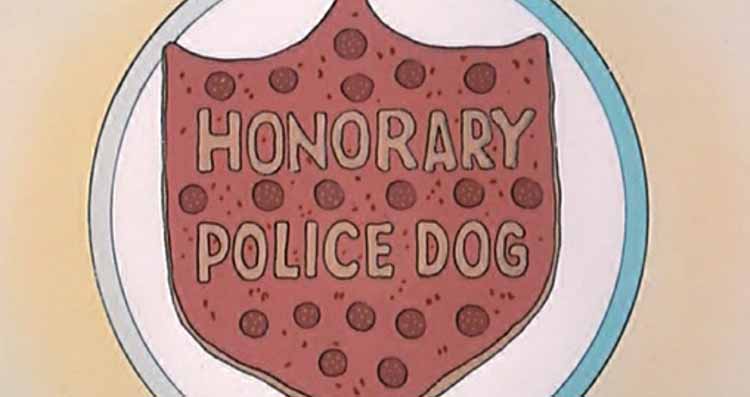 I give this episode a 10 out of 10.  I just think it’s perfect in every conceivable way.  Ebenezer’s backstory is cool and unique, and as a bad guy, he’s rather creepy.  The scene where he just appears on top of the Mystery Machine, and scares the daylights out of the gang is classic!

I also appreciate the lengths that these two robbers went to, to commit to their roles.  Jim Rivets dressed up like an old lady and lived in an abandoned haunted house!  So funny!

The construction site is ultra creepy, and seeing Daphne and Velma hang out at the library, or the Gang just chilling at the Pizza Parlour were a lot of fun.

Well that wraps up another mystery, until next week, Stay Spooky!

A Bum Steer For Scooby