Scared A Lot in Camelot originally aired on October 16, 1976 and is episode six of the Scooby-Doo Show.

We’re back on some familiar ground here, as we are treated to our third castle which has been transported from England back to the united states, brick by brick. In this instance, the castle happens to be King Arthur’s castle, and the ghost of Merlin the sorcerer, along with the Black Knight have come back to haunt it.

Taking place in New England, the gang end up at the Castle of Camelot to visit Shaggy’s uncle, Uncle Shagworthy, who has is the kooky zillionaire who had the castle moved over. Uncle Shagworthy, we learn, is incredibly rich due to him being a a successful jewellery dealer.

The episode begins with Shaggy’s Uncle Shagworthy, sitting in a castle library and reading the book ‘The Knights of the Round Table‘. Focusing on the book, a shadowy figure sneaks up upon him. As uncle Shagworthy cries out ‘no’ we assume the mysterious figure is bad news bears.

After attending and accidentally ruining a magic show for Zarko the Magician, the gang hightail to Shaggy\’s Uncle\’s castle. At the gates, the meet Clarence, the castle caretaker, who explains that Uncle Shagworthy has gone missing. 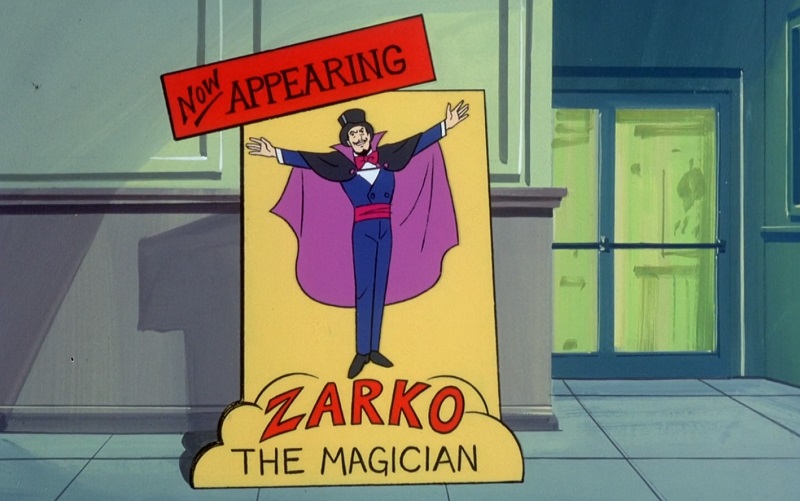 The great Merlin, then appears in a poof of red smoke, and summons the Black Knight to carry Clarence the Caretaker away. Merlin is unhappy with Clarence as he did not obey his warning to keep visitors away. Merlin then tells the gang to leave now, or he will cast his black magic spells on them as well.

Merlin disappears, and Freddy decides to enter the castle to rescue Shaggy’s uncle. As they wander about inside, they encounter the Black Knight, but are fortunate enough to slip away unnoticed into a hidden room after finding a secret panel.

Inside this hidden room, the gang find a replica of King Arthur and the Knights of the Round table.  It\’s a cool reproduction as it\’s several suits of armour sitting at a round table. 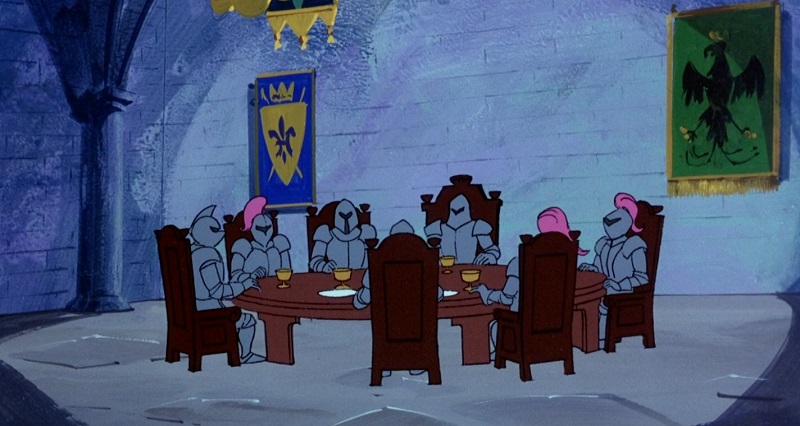 Without warning, in a rather haunting scene, the ghostly apparitions of the knights rise from the suits of armour and chase the gang.  Daphne, Velma and Freddy take off towards another room, while Shaggy and Scooby hide underneath the table. 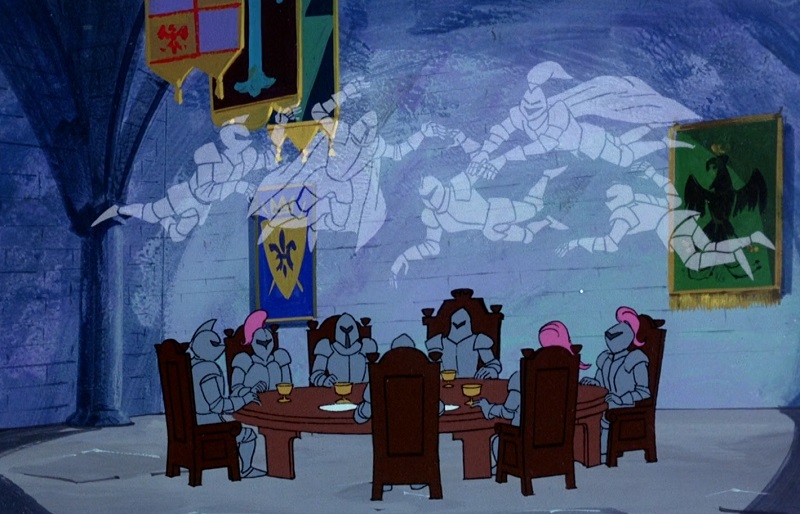 Merlin spots Shaggy and Scooby, and hypnotizes them two of them to become his evil apprentices.  His first demand is that they dispatch of Daphne, Velma and Freddy.  Merlin\’s plan is for Shaggy to pull the feather on a falcon statue, where a trap door will open in the library, sending Daphne, Velma and Freddy ‘into the moat where they will float like a bottomless boat’.

Looking for clues, Freddy, Velma and Daphne are in Uncle Shagworthy’s ransacked library, where they find a suspicious red scarf. 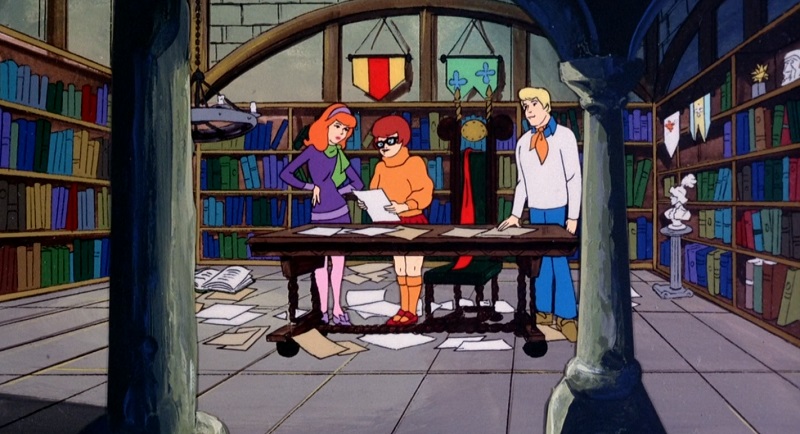 The hypnotized Shaggy and Scooby slide into the library and try their best to take out Freddy, Daphne and Velma, but backfire each time.  Realizing that there’s something up with Scooby and Shaggy, the rest of the gang eventually manage to snap the two of them out of their trance using the power of a Scooby Snax.

The gang keep searching for Uncle Shagworthy throughout the castle and eventually find him chained in a dungeon cell.  Uncle Shagworthy explains that Merlin and the Black Knight recently started appearing in the castle every evening at 12:15 am.  Daphne is puzzled at the odd time, as ghosts normally appear at the strike of midnight.

Regardless, the gang continue to search for clues, minus Uncle Shagworthy, who politely excludes himself as he’s allergic to ghosts. 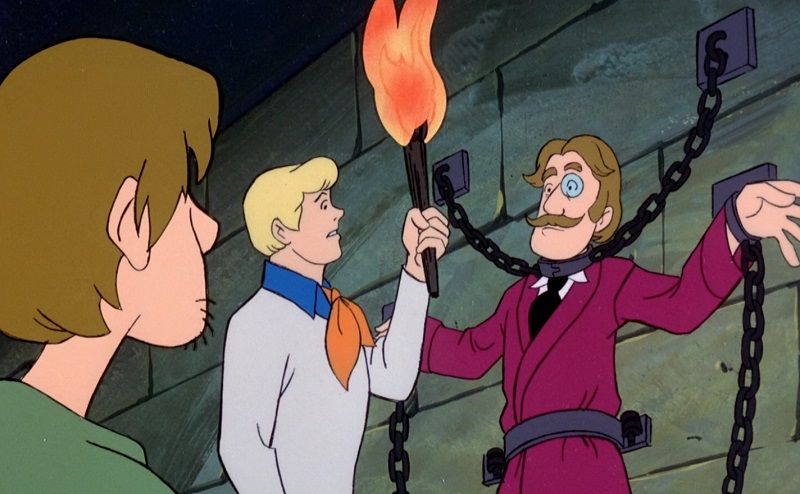 Visiting the treasure room, they also find that it has been ransacked.  Freddy, Daphne and Velma are once again chased by the ghosts of the round table, while Scooby and Shaggy are perused by the Black Knight and Merlin. 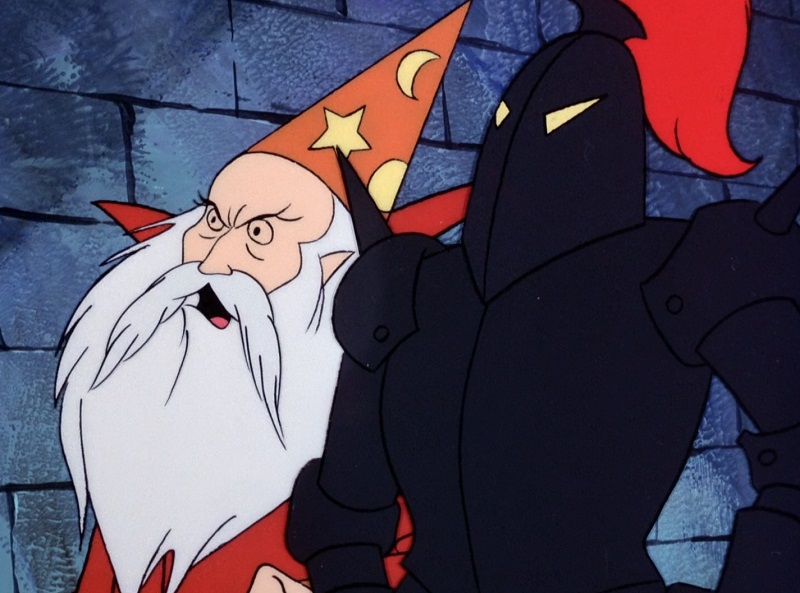 Eventually, both parties evade their separate pursuers and resume searching for clues in the castle.  Heading to the castle tower, they find an electric organ with a television monitor attached.  At this point, Velma starts piecing the mystery together.  Freddy clues in as well, and devises a plan to trap the Wizard. 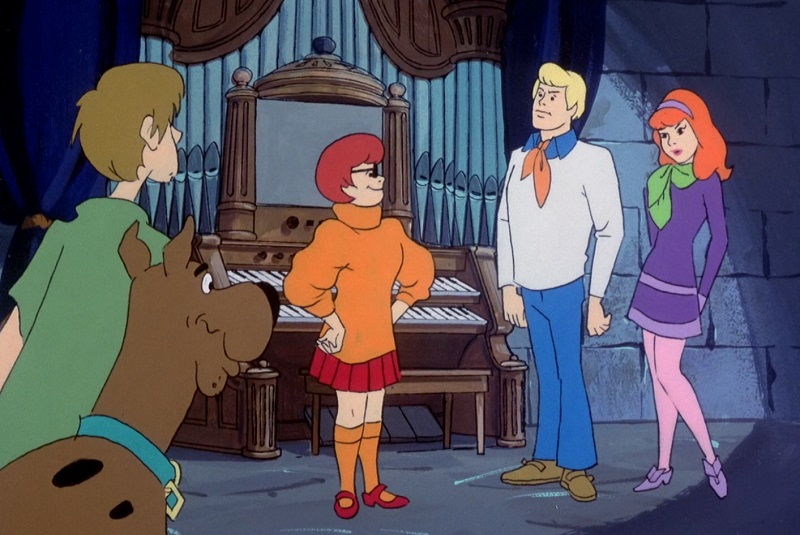 In true Scooby-Doo fashion the trap backfires, but obviously they end up catching the villains.

The Black Knight is revealed to be a hired henchman, while Merlin is first revealed to be Clarence the Caretaker, until Freddy removes a second mask to reveal Zarko the magician.

Hooking back up with Uncle Shagworthy, the gang explain that Zarko had been disguising himself as Clarence the Caretaker to find Uncle Shagworthy’s jewels.  Velma realized it was Zarko as when Clarence was kidnapped, the stunt was performed like a magician’s trick as the Black Knight carrying Clarence phased through a castle wall.

The red silk scarf they found in the library was another clue, as it is commonly carried by magicians.  The flying ghost knights were controlled by organ keys, and again were just illusions.  The final clue was the fact that the ghosts showed up at 12:15 am.  Zarko’s performance always ended at midnight, and the theatre he performed at was only 15 minutes away.

Uncle Shagworthy treats the gang to a banquet full of food, and we later find out that his jewels were hidden in an emergency food refrigerator.  Like Uncle, like Nephew. 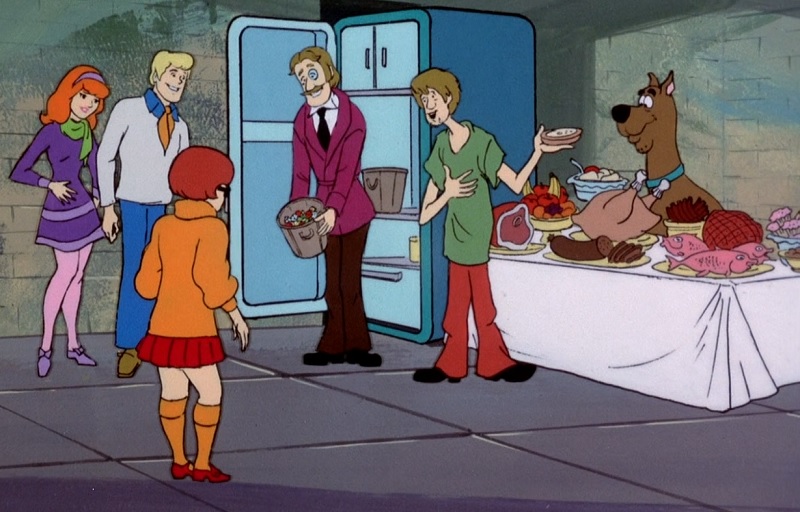 I’m feeling an 8.5 out of 10 for this one.  The big seller for me is scene where the ghosts of the round table emerge.  Their crazy laughter was somewhat haunting, and the way they floated about reminded me of the Haunted Mansion ride at Disney.

Uncle Shagworthy was another treat.  His similarities to Shaggy were funny and entertaining.  The opening scene with Zarko was also fun.  Seeing Scooby and Shaggy hypnotized, and acting ‘evil’ also cracked me up.

Although the design of Merlin is rather kid friendly, I did enjoy the magic powers they gave him.  I appreciated that this whole castle was rigged with illusions and magic tricks.  Seeing Merlin also brings back fond memories of the opening credits to the Scooby-Doo show where Merlin is featured.

The episode also feels a little loose, and padded, focusing more on gags, than suspense or mystery.

Overall, it’s a great episode, but I did not find that it delivered the goods like High Rise Hair Raiser, The Headless Horseman of Halloween, or Mamba Wamba and the Voodoo Hoodoo which also comprise of the first season of the Scooby-Doo Show, did.