Well, here we go!  What a Night for a Knight is the first episode of Scooby-Doo, Where are You! to ever air.  Premiering on September 13, 1969, this is the show that would change our lives forever!

I would have loved to have been a kid watching this for the first time back in 1969, but it debuted a few years before I was born.  I can only imagine the excitement kids everywhere must have felt experiencing this incredible debut.

Some notable highlights for this episode: Fred’s name is never said, and this is the first episode where Velma loses her glasses.  Also interesting is that Freddy says, ‘Well gang, it looks like we’re up to our armour plates in another mystery,’ implying that this is not the first mystery they’ve been involved in. Finally, this is the first episode where the line “Would you Do it for a Scooby Snack” is said.

It is also revealed that Shaggy is skilled at ventriloquism and throwing his voice and the most swinging gymnast in high school.

In this episode, Scooby and Shaggy find an abandoned Pickup Truck with a suit of armour sitting in the front seat.  The gang deliver it to the local Museum, where they discover that the suit of armour comes alive during a full moon.  And that night happens to be a full moon!  Zoinks!

The episode begins with a man driving a pickup truck down a country road at night.  Unaware to the driver, the lid of the crate he is transporting opens up, and the Black Knight emerges! 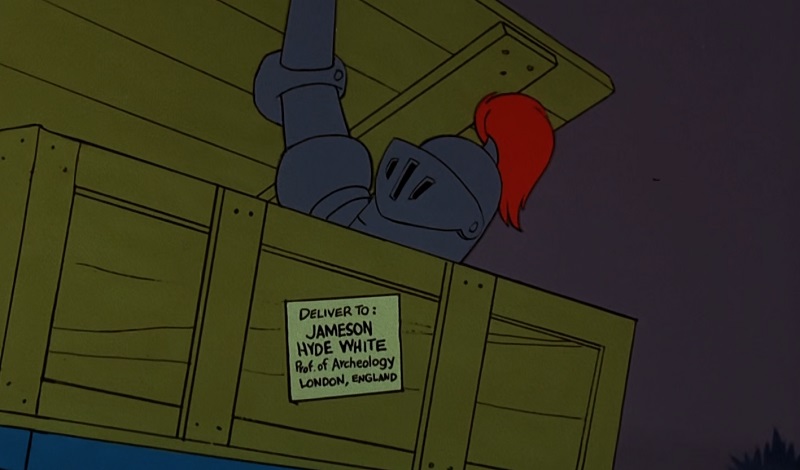 We then cut to Scooby and Shaggy, walking home from the movie theatre.  They had just seen Star – Dog Ranger of the North Woods. Twice!  However, Shaggy is a little nervous walking at night, Scooby is still pumped after seeing the flick.

Upon hearing some rustling in the bush, Scooby spots a frog and chases after it.  The frog leads Scooby and Shaggy right to an abandoned pickup truck, with the lifeless suit of armour sitting inside.  As if on cue, the head of the suit of armour rolls right off and scares the dickens right out of Scooby and Shag. 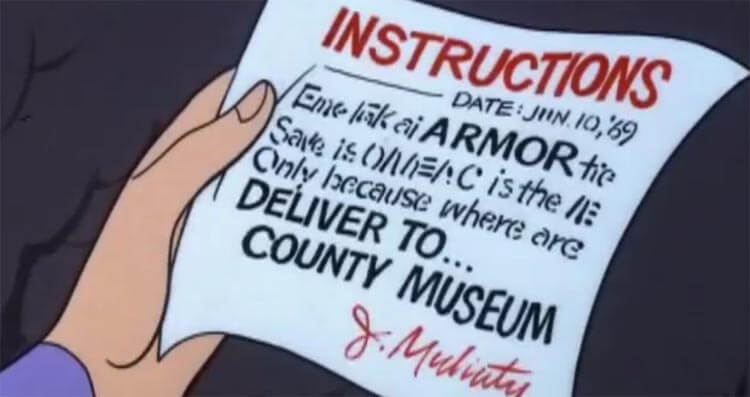 The next day, the gang drop the suit of armour off at the County Museum.  There they discover that Professor Jameson Hyde White (who was the man driving the pickup truck earlier) has mysteriously disappeared.  And the museum curator, Mr. Wickles, explains the legend of the Black Knight and how the suit of armour comes alive during a full moon.

Mr. Wickles also explains that Professor Jameson Hyde White is from England, and was personally driving the Suit of Armour to the County Museum for their collection.  As Mr. Wickles explains all of this, nobody notices the eyes of the Black Knight glowing, and Mr. Wickles has his two workers move the Black Knight to the medieval room.

Before heading out, Scooby discovers a pair of Jeweller’s glasses, which are glasses intended for working with objects were magnification is needed.  In a rush, Scooby snags them and pops them on.  Driving in the city, Shaggy discusses how hungry he is, and the others notice that Scooby is wearing these weird glasses. Realizing that Scooby found them a the museum, the gang head to the local library to figure out what they are. 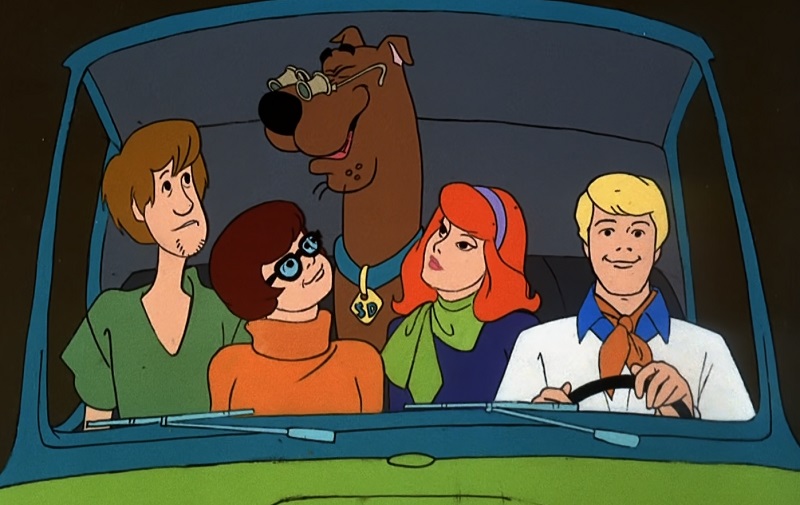 At the library, they learn that the glasses were made in England and are intended for jewellers, scientists and archaeologists.  Knowing that Professor Hyde White is from England and an archaeologist, the gang feel as if something fishy is going on, so they return to the Museum. 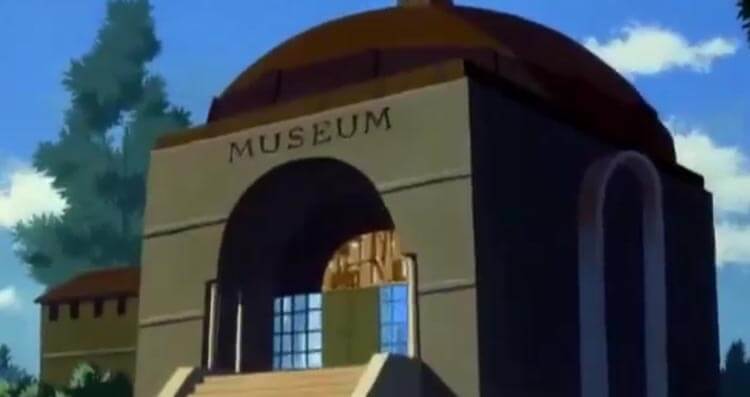 It just so happens that it’s a full moon that night, and the gang break into the Museum.  Splitting up to look for clues, a mysterious Native Indian Effigy silently watches Scooby, Shaggy and Velma. Daphne and Freddy are meanwhile being watched by a mysterious figure in an Egyptian Sarcophagus.  It doesn’t take long for Scooby, Shaggy and Velma to run into the Black Knight, and a brief chase ensues, in which Velma loses her glasses.  After the chase, Shaggy and Scooby discover that a painting is missing from the wall. 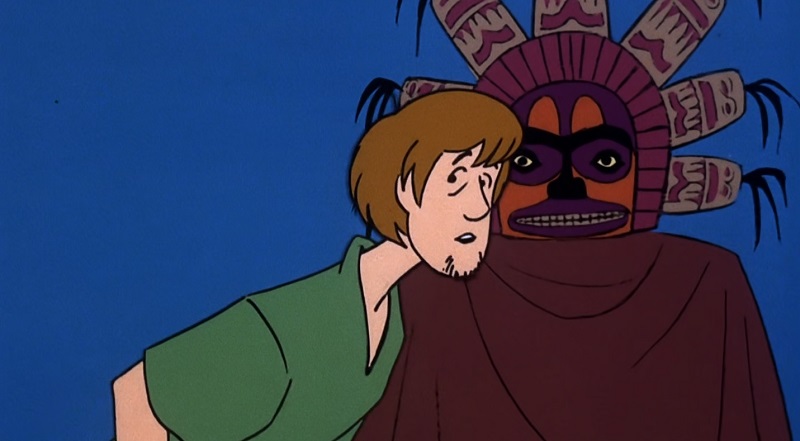 Reuniting with the rest of the gang, they all return to find that the missing painting is now hanging on the wall.  Freddy is a little peeved at their fake clue, but Daphne redeems them when she finds some red paint on the floor.  Following the paint, the gang find a hidden room behind a Sarcophagus, which is full of finished and unfinished paintings.  They also find the Black Knight and a chase ensues. 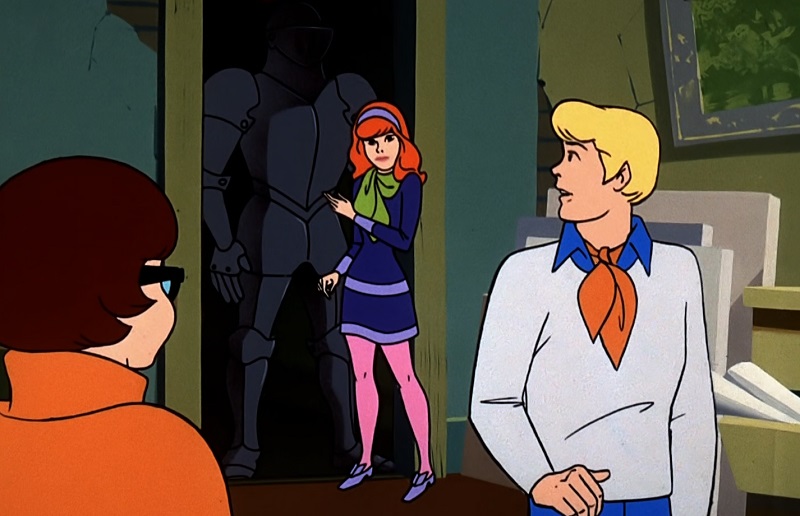 Many hijinks occur during the chase, with a major one being Scooby and Shaggy crashing a World War I biplane into the Black Knight.

Unmasking the Black Knight, it’s revealed to be Mr. Wickles, the museum curator.  It turns out Mr. Wickles was part of a painting smuggling ring (including his two museum helpers). They would steal and sell the real paintings while replacing the real ones with fakes that he would paint.  Wickles knew that Professor Hyde White would know that the paintings were fake, so he kidnapped him and used the Black Knight mythology as a ruse.

I give this episode a 10 out of 10.  This episode is perfect in every way.  The jokes are funny, and the Museum at night is rather creepy.

Sure the Black Knight is a bit boring in that he doesn’t speak, and his metal mask ensures that his face is non-expressive.  However, I\’d argue that he is rather imposing, and the legend behind a suit of armour that comes to life is rather spooky.  I feel this made for a great first Scooby-Doo villain as it kept the show grounded in reality as the entire events happen in a common place that anyone could visit.

I’ve seen this episode dozens of times, and it’s always a joy to re-watch.  For being fifty years old, this episode remains fresh, funny and spooky for kids of all ages!