Foul Play in Funland is episode 8 of the first Season of Scooby Doo Where Are You and it originally aired on November 1, 1969.

The premise is the gang investigating a haunted amusement park where the rides and attractions are seemingly running by themselves. A speedy man, with incredible strength is also causing chaos within the park.

This is the third episode where the Mystery Machine is missing and we get the infamous scene where Scooby licks his face clean of pink cotton candy.

Foul Play in Funland is a classic Scooby-Doo episode appearing on many dvd and vhs packages, but does it still hold up today? Let’s find out!

The episode begins with the gang digging for clams on the beach at dusk. As the sun sets, they notice the lights turn on for the closed Funland Amusement Park and Freddy decides that they need to investigate. 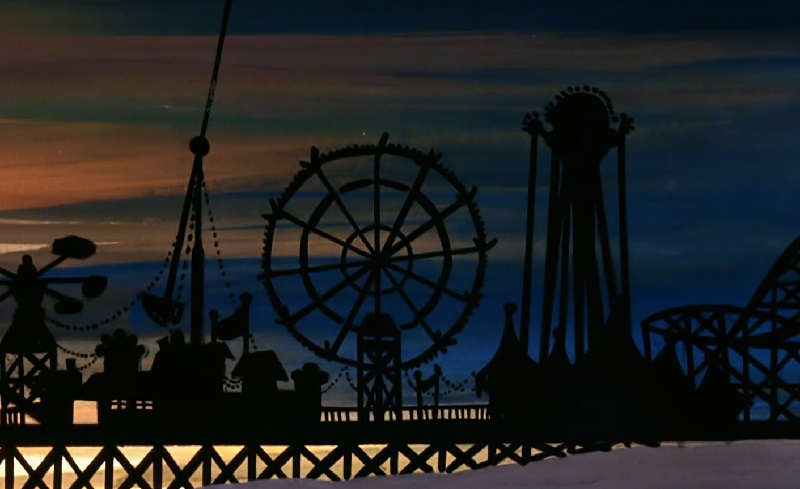 It’s hard to believe, but everything is running and nobody is there to operate the rides. To Shaggy, this is a dream come true, as it means unlimited carnival snacks.

Freddy enjoys a quick carnival game, and wins. While his back is turned, he gets a Cupie doll as a prize by an unknown presence. 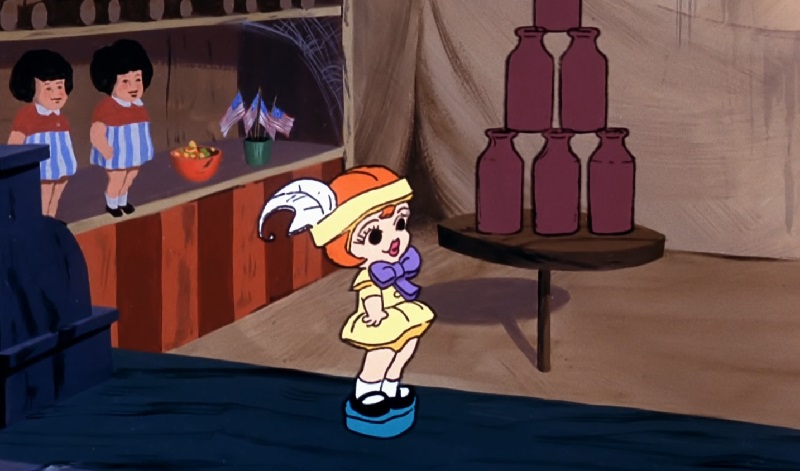 Shaggy and Scooby are the first to run into a speedy figure dashing about the park, and go investigating. Sniffing the ground, Scooby leads the pair to what Shaggy describes as ‘the man from Mars’. 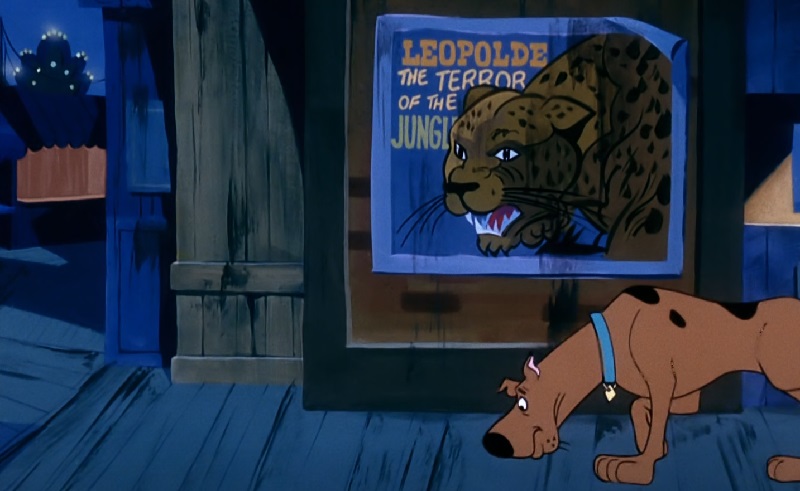 The mysterious man walks into a house of mirrors where Shaggy has a close encounter, so they take off to find the rest of the gang. 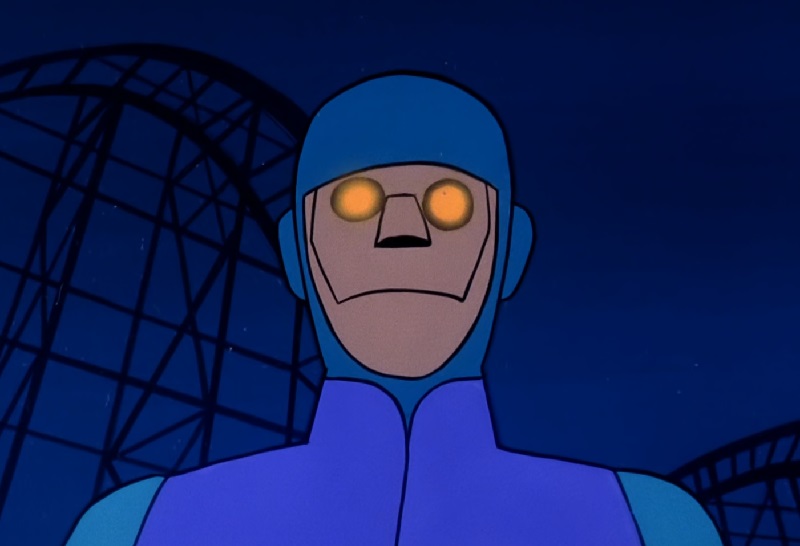 Freddy, Daphne and Velma see the man get on a Ferris Wheel, and the Ferris wheel gets stuck at the top of the ride. Thinking the man is trapped, Freddy uses a crank to manually return the Ferris Wheel cart, but by the time he gets it down, the mysterious man has vanished. 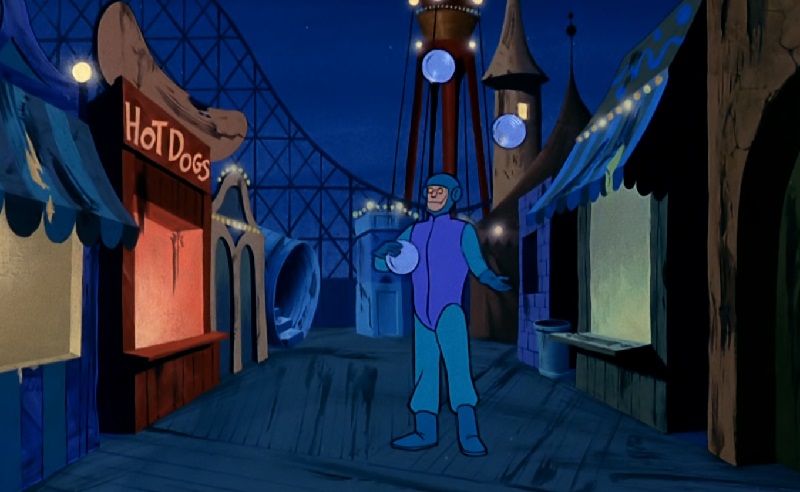 All of the lights for the amusement park turn off, and the gang reconnect to share their spooky experiences. While chatting, they see a nearby house which they assume is that park caretaker’s house.

Inside the house they meet Mr. and Mrs. Jenkins. Explaining the situation, the siblings are shocked and dumbfounded. Mrs. Jenkins thinks the gang are making things up, while Mr. Jenkins feels that the moonlight had played tricks on the gang. The gang politely leave and Freddy feels like they’ve been double talked, so they head back to the beach to keep a watchful eye on the park.

After an hour, the Amusement park lights up again. This time, the rides are running crazy, with the merry go round spinning backwards, the cotton candy machine is vomiting cotton candy everywhere, and the hot dog stand shooting out hotdogs like missiles.

The gang see the strange man juggling on the boardwalk, so they rush after him. The man escapes into the tunnel of love, so the gang hop on a boat and take chase. Like a torpedo, the man crashes into the gang’s boat, and they all end up in the water, ruining Daphne’s hair.

Splitting up, Shaggy and Scooby are the first to find the ‘torpedo man’ and a quick chase ensues. Shaggy and Scooby hop on a roller coaster, but the man climbs up the cars after him. Freddy sees that they are trapped and Freddy slows down the ride to save them.

Once on the ground, they see the man dive off the top of the rollercoaster tracks.

Freddy soups up an electric cart so they can keep pace with the fast man. The cart’s so fast that Velma’s glasses fly off, and she takes herself and Scooby for a blind ride. The pair cause a lot of chaos until they are slowed down by a heap of cotton candy. At this point we see the legendary scene where Scooby licks the cotton candy off his face. 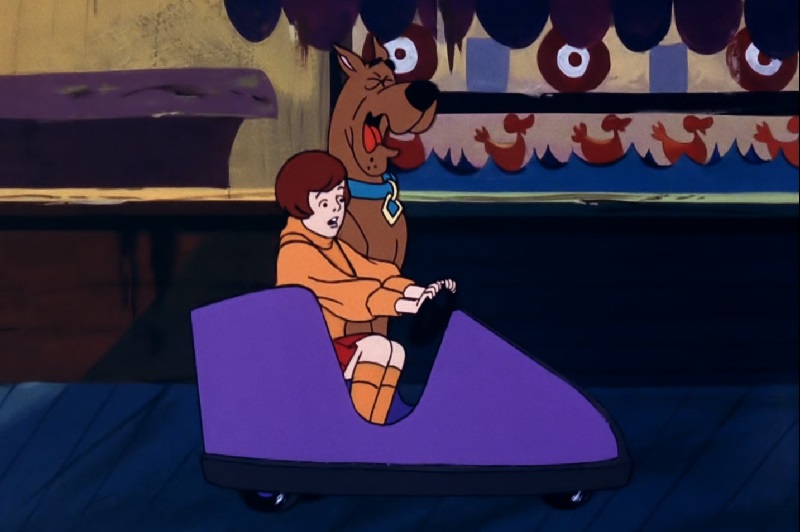 Undiscouraged, Freddy designs a new trap that involves Scooby as a lure. Scooby hides in a barrel until he bumps into the mysterious man, and leads him into the trap. They successfully trap the man, but his brute strength allows him to walk right through the wooden crate they trapped him in.

Freddy exclaims that this mysterious fellow must not be a man, and Mr. Jenkins, the park caretaker, appears and tells them that he is right. Holding a remote control, he explains that Charlie is a robot. 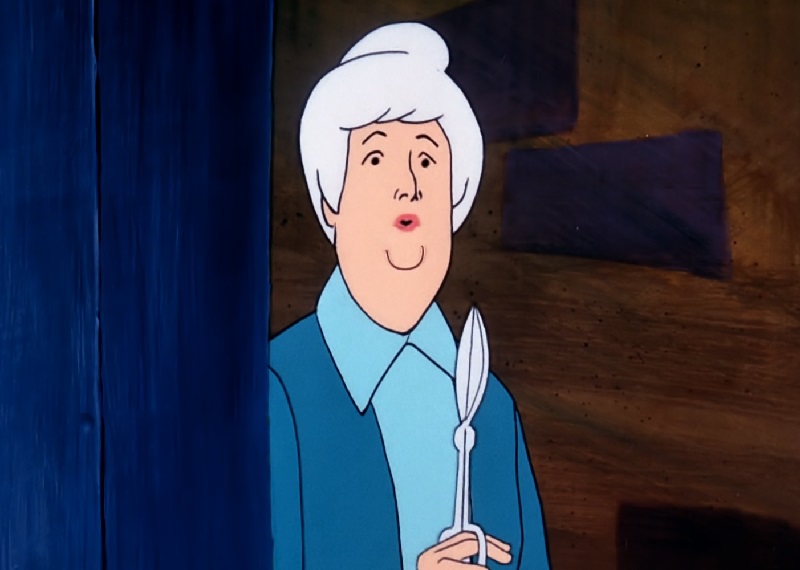 Charlie was programmed to run the park but is now out of control and Mr. Jenkins doesn’t know why.. Using a giant electro-magnet, they almost capture the robot, but a pair of shears mysteriously cuts the magnet cable setting the robot free. Fortunately the magnet has interfered with Charlie’s circuits and he’s out of commission.

Scooby realizes someone else is nearby and points at a nearby fence. Velma calls for the person to come out, and we see Sarah Jenkins. She says she was concerned Charlie could be dangerous to children, so she caused it to go out of control, and the gang agree that he could be a danger.

Mr. Jenkins agrees as well, but fixes up Charlie regardless, and the episode ends.

While Charlie the robot isn’t necessarily spooky, his character design is memorable, and he is quite kooky as he zips around the park.

The idea of a haunted amusement park is also quite creepy, and seeing these rides operate by themselves from several different perspectives makes this episode a lot of fun.

The episode takes full advantage of the setting, and we see everything we could ask for with haunted Ferris wheels, roller coasters, merry go rounds, and possessed cotton candy machines. The gang also interact with a house of mirrors and a wax museum which adds a touch of fun to this episode.

So while the villain isn’t spooky, the setting certainly is, and I think they came up with a good villain to explain the hijinks behind everything.

This is classic Scooby-Doo done right and I feel this episode will be a classic for 50 more years down the road.

The carnival continues next week when I will be exploring Bedlam in the Bigtop. Until then, Stay Spooky! 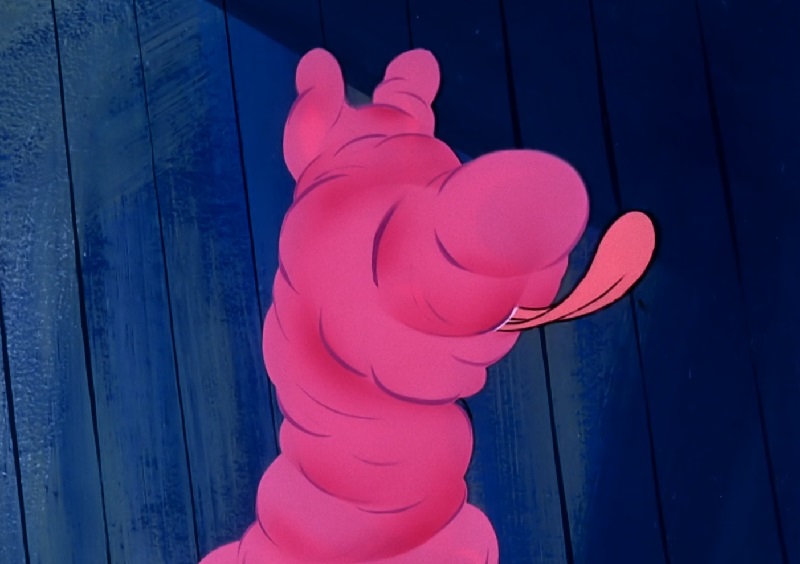