Bedlam in the Bigtop is the 10th episode of Scooby Doo Where Are You! And originally aired on November 15th, 1969. Here we see the gang confront a ghost clown who has been sabotaging the local circus.

As for trivia, this is the first time that Shaggy captures the bad guy. This is also the first episode where hypnotism is featured in an episode. In Never Ape and Ape Man, Daphne had been carrying around a Shaggy Snack which was a sweet and savoury dessert pie. In this episode she has a giant hero sandwich that she uses to bribe Shaggy and Scooby.

We also find out that Daphne doesn’t know how to ride a bicycle, and that Shaggy runs track. I’d also say the Ghost Clown might be the most terrifying Scooby-Doo villain as lots of people have a clown phobia. So if clowns scare you, this episode isn’t for you.

Well enough of my jibber jabber, lets get to the review. 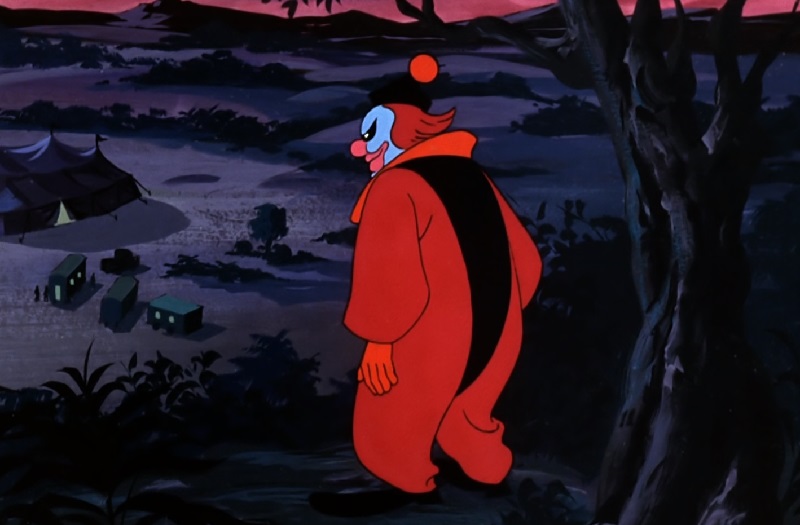 The episode opens up with a creepy man in a clown suit overlooking an empty circus at night. We then cut to two circus performers riding a bicycle built for two down a road. The bicycle begins falling apart, and the two performers crash into one another.

The Mystery Machine drives by to see the crash happen and the gang stop to see if they can help. There they are introduced to Samson the strong man, and Max who is a little person performer.

Max and Samson explain that someone had fixed their bike to break in half, and that the circus they just quit was jinxed. Curious about the circus, the gang head to the circus to investigate.

At the circus they meet up with the ringleader Mr. Barnstorm, who is upset that with Samson and Max gone, his circus will not be able to open this year. Mr. Barnstorm also explains that the circus is haunted by a ghost clown.

When the ghost clown appears in your circus, you might as well quit, as circus performers are superstitious. Mr. Barnstorm also lets the gang know that tightwires have been sabotaged, and the lions are acting like scared pussycats. He also tells the kids to leave the grounds and go straight home.

The gang hop into the Mystery Machine, but need to return to the circus as they have forgotten Scooby-Doo. Unknown to them, Scooby is hypnotized by the Ghost Clown to do the highwire act. 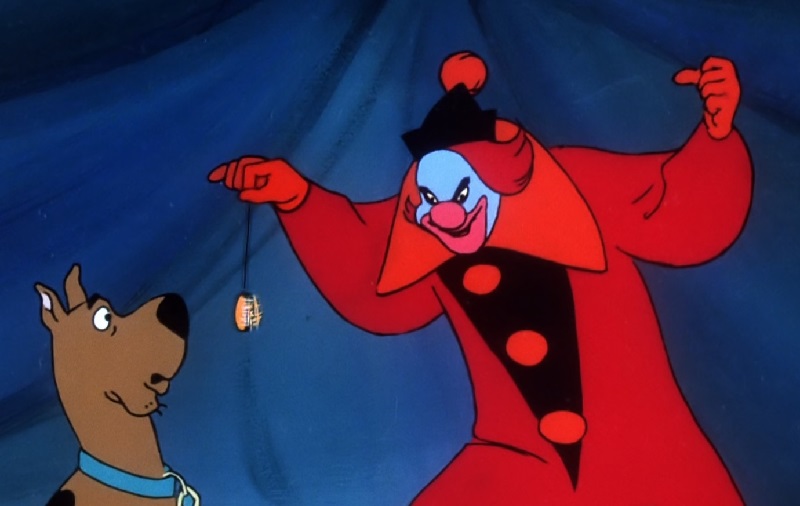 Shaggy and Velma come across Scooby walking along a tight rope and are shocked to see Scooby performing stunts on the high wire. Grabbing a trampoline, they save Scooby as he falls after the Ghost Clown wakes him up from his trance.

Freddy is locked into a steamer trunk full of costumes, and Daphne is the next one to be put under the Ghost Clown’s spell and she emerges as a ballerina on a unicycle. Scooby, Shaggy and Velma do their best to wake her up using some loud instruments, but in the end they use some elephants spraying water to wake her up. 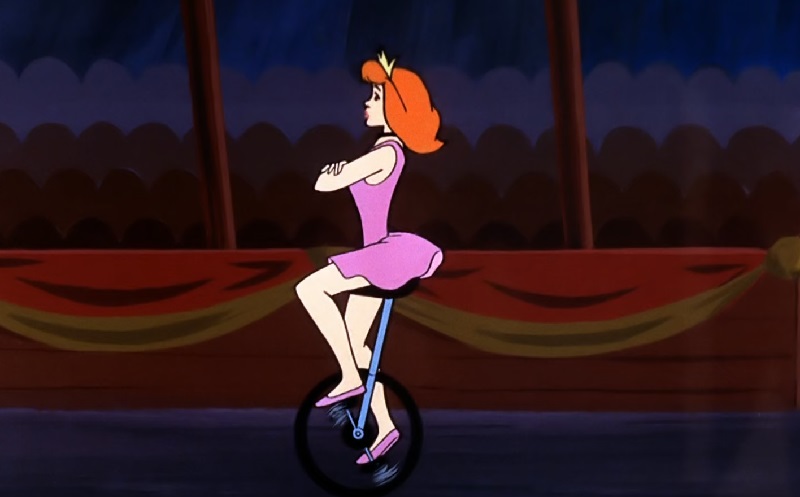 The gang head back to the costume tent and free Freddy from the trunk. Freddy comes up with the perfect trap and bribe Scooby with a giant hero sandwich. Shaggy wants in on the action and explains he runs track, so the two act as bait with the intention to split the sandwich.

Shaggy meets up with the Ghost Clown and is caught in a trance and now thinks he’s a lion tamer. Entering the cage, Shaggy goes face to face with a lion and puts his life in danger. Scooby fortunately knows what to do and saves Shaggy. They complete Freddy’s trap and lead the ghost clown into cage and successfully capture him. 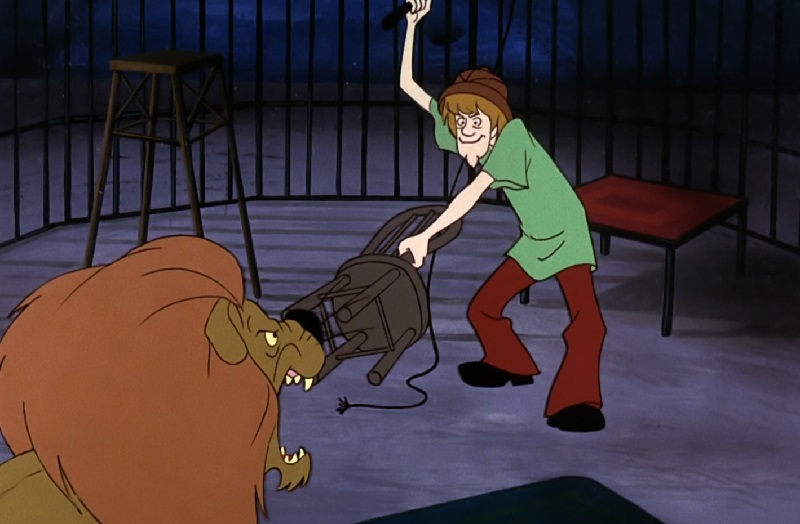 Shaggy has an idea, and chases after the Ghost Clown once more. As the Ghost Clown begins his hypnotizing act, Shaggy and Scooby hold up a mirror so the Clown hypnotizes himself.

The clown now thinks he’s a chimpanzee, and Shaggy and Scooby lead him to the cage where they unmask him. Mr. Barnstorm explains that the man is Harry the Hypnotist. He had an act with them, but they caught him stealing so they sent him off to prison. Wanting revenge, he planned on ruining the circus. 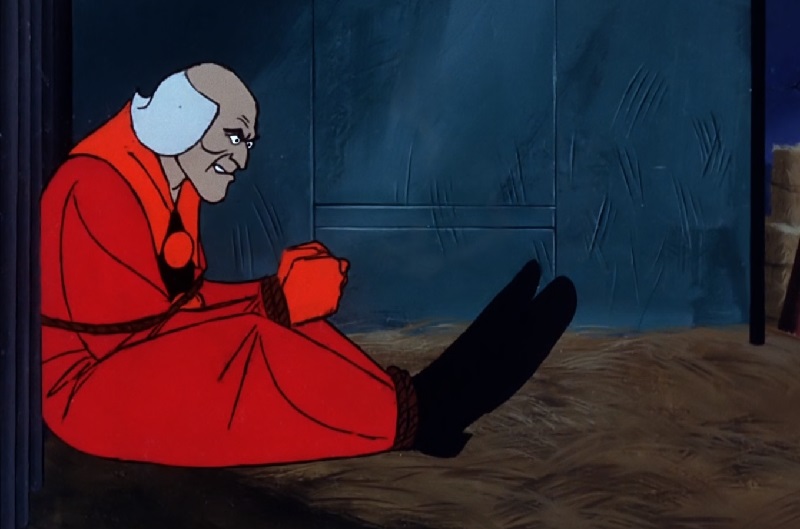 He was also able to disappear from the cage previously as he used an inflated clown balloon that he was able to deflate remotely so it would fall to the ground hidden.

Another Mystery is solved and the gang return to the circus to watch the performers.

For this reason you’d think I’d give the episode a higher rating, but I found it’s an episode I rarely want to watch. I think it’s because not much happens. The gang are repeatedly hypnotized and put in a dire situation, so it’s the same gag repeated 3 or 4 times. This makes for a fun first watch, but I find it doesn’t hold up for repeated views.

The gags are fun, and it is cool seeing Scooby walk a tightrope, or Shaggy tame a lion, but I don’t think this episode made full use out of the creepy circus setting.

Well, that wraps up another episode, join me next week where I will be covering a Gaggle of Galloping Ghosts.

A Clue For Scooby Doo