Mine Your Own Business is the fourth episode of the first season of Scooby-Doo, Where Are You!, and it originally aired on October 4, 1969.  The episode finds the gang lost in the desert where they end up in Gold City.  Here they try to check in for the night where they discover the ghost town and local mine is haunted by the Miner Forty-Niner.

Not a fan of words and stuff? Watch the review instead!

As with all episodes I review, spoilers galore! On with the show.

Mine Your Own Business – Review

The episode sets the mood with a vulture cawing at a lightning storm amongst the ruins of ‘Gold City’, which appears to be a Ghost town. Disinterested in the storm, a bearded man, wearing gold rush era clothes, slowly walks past a boarded-up mine entrance. 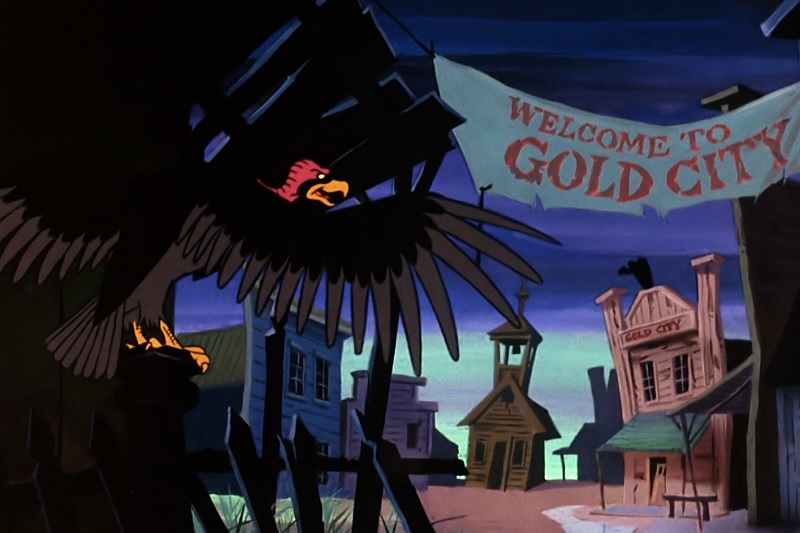 In the Mystery Machine, the gang realize that they are lost as Shaggy has been reading their travel map upside down. They never do discuss where they were headed, but they end up in the ghost town of ‘Gold City’. 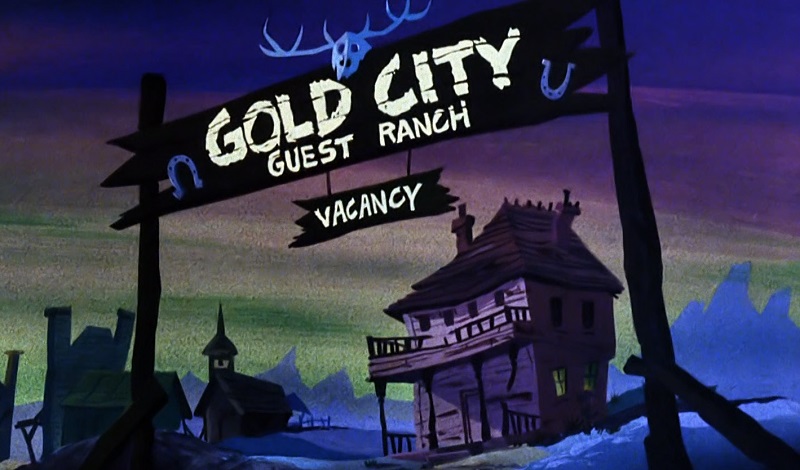 As it’s getting late, the gang decide to check into Gold City’s Guest Ranch where the owner, Big Ben, is happy to see them. Nobody has visited Gold City for quite some time, as Ben’s assistant, Hank explains, due to the “Miner Forty Niner”. This ghost, who looks like an old prospector, has been scaring all the guests and tourists away.

Hank further explains that the Miner Forty-Niner (who came to Gold City in 1849) is looking for the last vein of Gold. Guests and tourists are not only scared of the Miner’s ghost, but the moans that come from the mine. In fact, Hank himself plans on moving away the very next day. 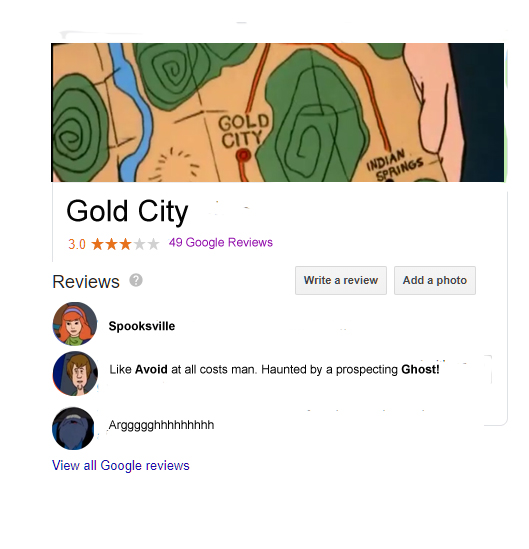 With a couple of hours of daylight left, and nothing to do, the gang drive into Gold City to take a look around. Parking the Mystery Machine, the gang investigate an old saloon, and then a hotel, but spot no signs of the Ghost Miner. Freddy decides they should head to the mine, and as they are on their way there, Scooby spots the Miner in a mirror. 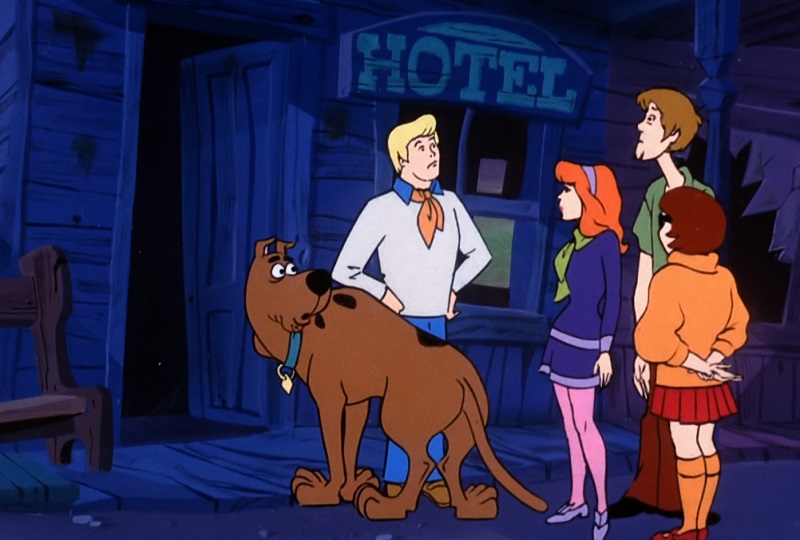 Running away in terror, Scooby knocks over a cigar store Indian, where the gang discovers a modern map of Gold City, and the digits of a safe code scrawled in the corner. 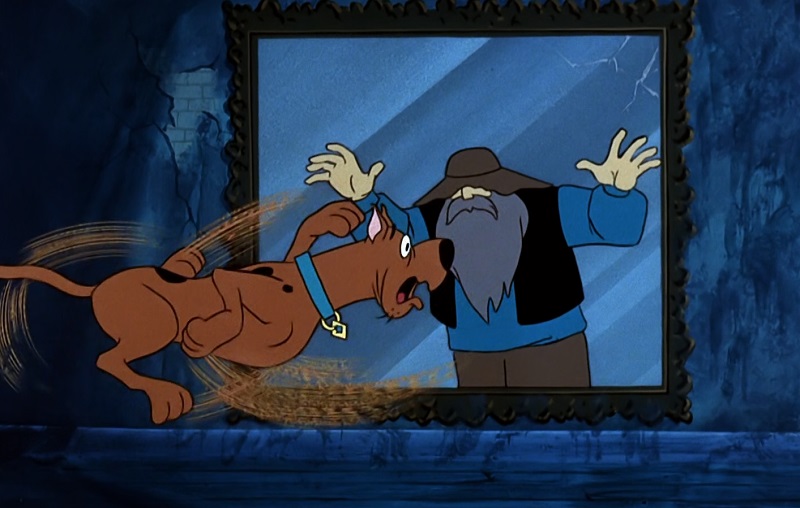 Freddy remembers that there was an old safe in the Hotel lobby, so the gang head over there to open it. Shaggy and Scooby open it and inside is a secret elevator that heads down into the mine. To coax Scooby into the rickety elevator, Daphne offers Scooby two Scooby Snax. 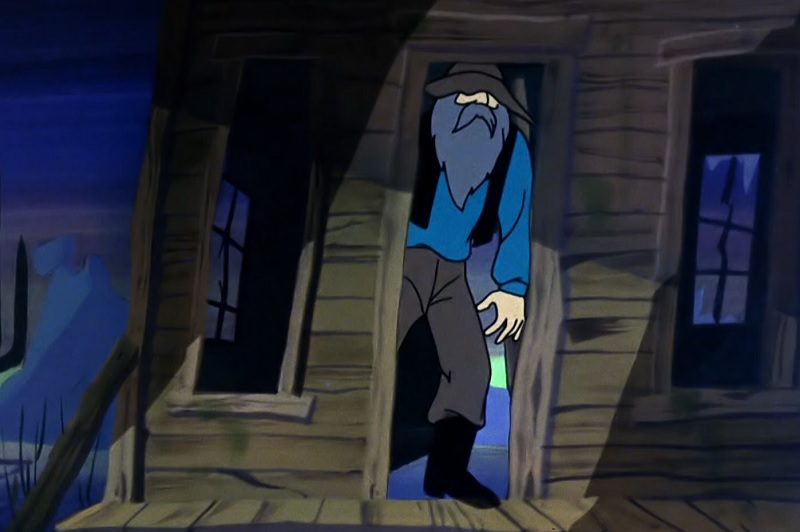 In the mine tunnels, Fred and Daphne discuss how dark it is, so Shaggy lights some candles he finds, which turn out to be dynamite. Further down the mine they see lanterns that have been lit, and Freddy wonders who may have lit them. A creepy moan emitting from the tunnel hints that they might soon find out.

Naturally, the gang split up to find the culprit and it doesn’t take long for Scooby and Shaggy to run into the Miner and a chase ensues.  Meanwhile, Freddy finds a storeroom full of bags of flour but falls through the floorboards getting covered from head to toe in the white stuff. As Freddy makes his way back up to Velma and Daphne, he frightens poor old Scooby and Shaggy.

Spooked by Freddy, Shaggy and Scooby hop on a mine-cart and head off to who knows where. Unfortunately they have company, as the Miner Forty-Niner is right behind them!

The mine cart chase ends after Scooby and Shaggy crash into some barrels by Freddy, Velma and Daphne, and the gang are reunited. At least until Danger Prone Daphne falls into a mine shaft and finds a secret passage, however taking the secret passage, she makes it safely back to the gang.  Velma also finds a wire on the ground that leads up to a loudspeaker. So the gang follow the wire and it leads to a tape recorder, which has been responsible for all the loud moaning.  Shaggy also finds jars of chocolate syrup, but before he can gulp it down, Freddy tells Shaggy that it’s a jar of crude oil.

Freddy devises a plan where Shaggy uses his Michael Winslow like sound effects skills to imitate a train, while Scooby commandeers a mine-cart with a speaker and flashlight attached. The goal is to mimic a train, and it works as it allows them to chase the Miner all the way to an old shack.

Scooby crashes into a shack, destroying it, and sending himself and the miner off a mine shaft ledge. Hanging on to the miner’s boots for dear life, Scooby reveals that the Miner has been wearing stilts. 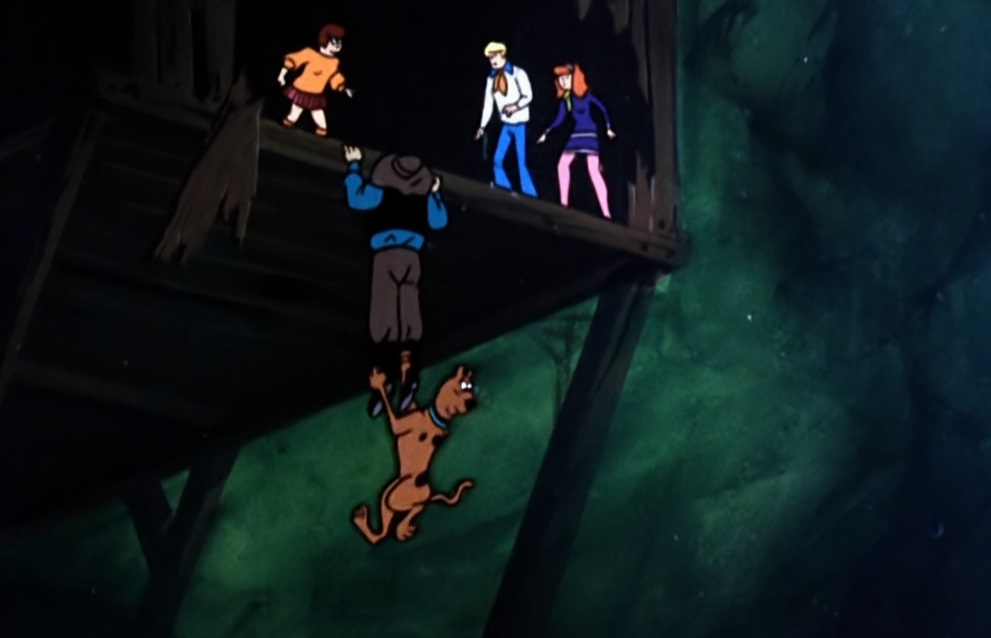 Unfortunately, Scooby falls, taking the Miner\s boots with him, but the fall turns out to be not that far and Scooby is A-OK.  Freddy takes the beard off the Miner and reveals that it’s Hank. 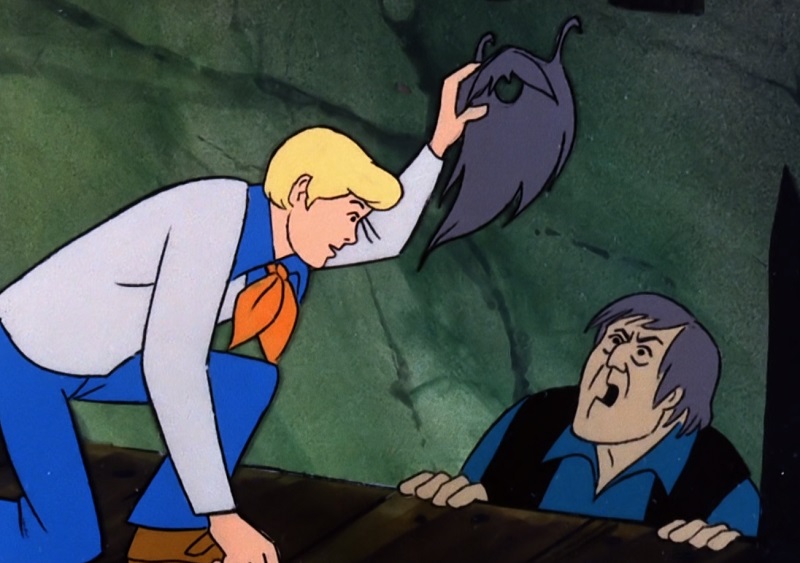 The Gang reveal to Big Ben that Hank wanted to force Ben out of business. That way he could buy the ranch, ghost town and mine for almost nothing. Then he could drill for oil in peace and make millions! But now instead of doing the right thing and partnering up with Ben, Hank is in jail. Crime does not pay kids!

Scooby puts Hank’s stilts to use by picking fresh apples of an apple tree!

I really love this episode, and consider it one of my favourites as I’ve always dug Ghost Towns and Creepy Mines.  I remember being a kid and hearing Shaggy whistle ‘Oh My Darling Clementine” during this episode, and somehow I created new lyrics where I replaced ‘Oh my Darling, Oh my Darling, Oh My Darling Clementine’ with ‘I’m a Miner, 49er, working hard in the mine.

I also enjoyed the look of the ghost miner.  While I never felt he was scary, he did seem more real than the other ghosts and bad guys in the series.  Speaking of real, there is an Indian Springs Ghost Town in Kern, California, in the Mohave Desert, which is probably where this episode is based.

Until next time gang, stay curious (unless you’re a cat of course). 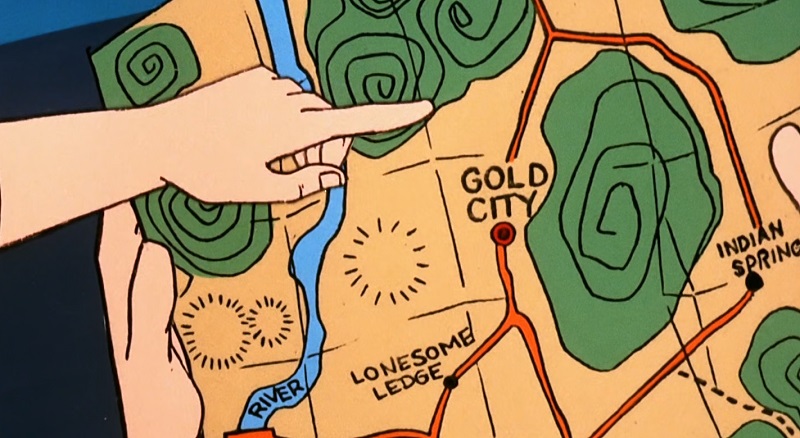