A Gaggle of Galloping Ghosts is episode 11 of Scooby Doo where are you, and originally aired on Nov 22, 1969. It features the gang visiting Frankencastle, which is a historic castle that has been imported stone by stone from Transylvania.

This episode is the first episode where the villain states that ‘I would have gotten away with it too if it wasn’t for these blasted kids and their dog’. Although in recent years, I feel the more famous line is meddling kids.

This episode is fondly remembered for containing the classic universal monsters of Dracula, the Wolfman and Frankenstein’s monster. But after 51 years, does it still hold up? Let’s find out!

A Gaggle of Galloping Ghosts Review

The episode begins with a creepy moonlight shot of a castle. Up above on a turret, we see a wolfman snarling as the Mystery Machine drives by. 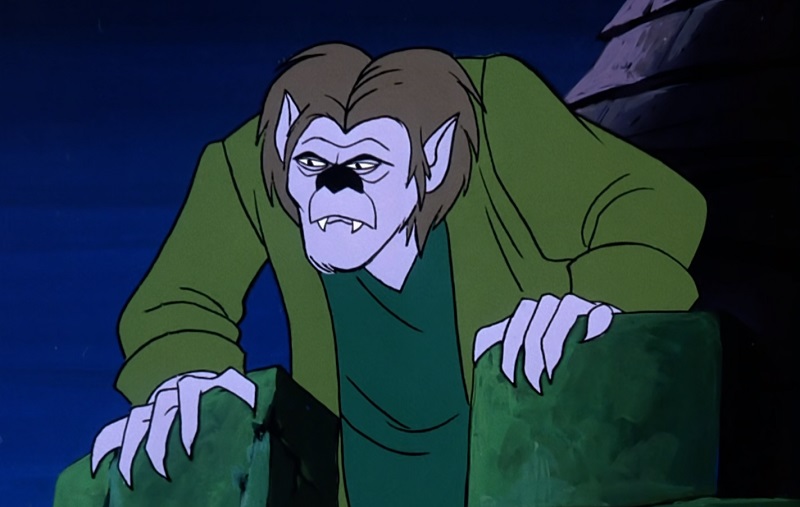 Inside the Mystery Machine, Freddy remarks that they’ve come across Frankencastle. It’s the only castle that has ever been imported stone by stone from Transylvania. Velma is excited to bust in and see the castle, but Daphne is hesitant as she’s worried about the stories of Werewolves living in Transylvania. 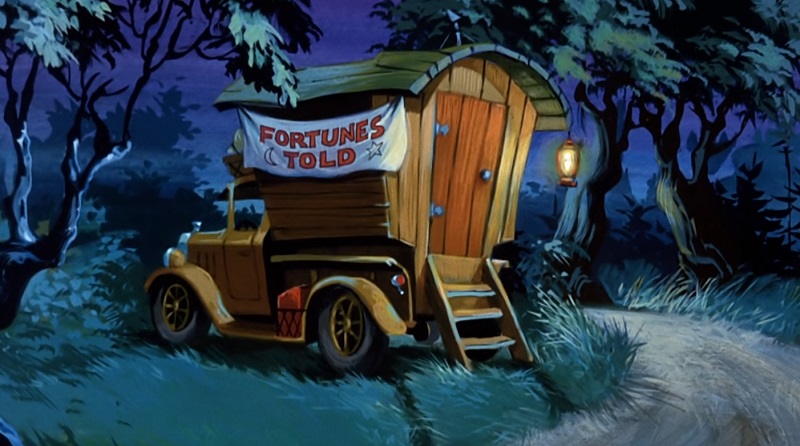 Parked nearby is a fortune teller’s wagon, so the gang enter. Inside, they meet an elderly woman who reads them their fortunes. The fortune reveals great danger as long as they stay in the nearby from the world of the dead. 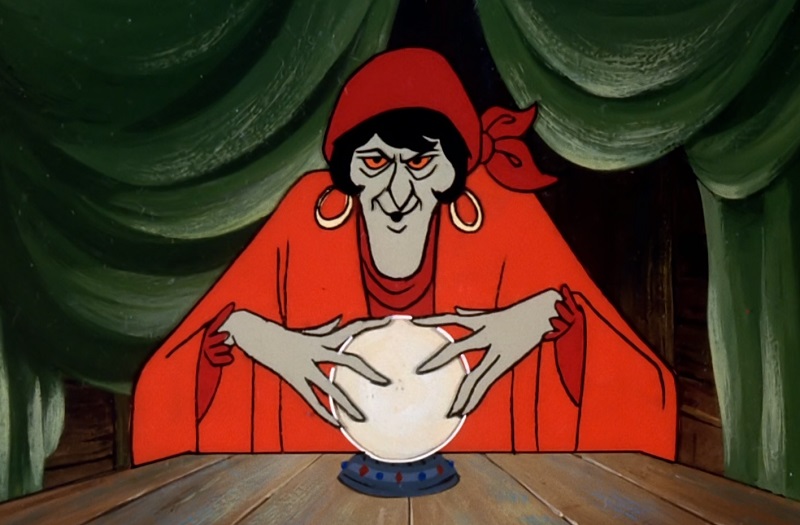 The woman warns them to stay away from Frankencastle, and that the caretaker has even abandoned the building. Ignoring her advice, they drive to the castle, only to find the drawbridge raised. 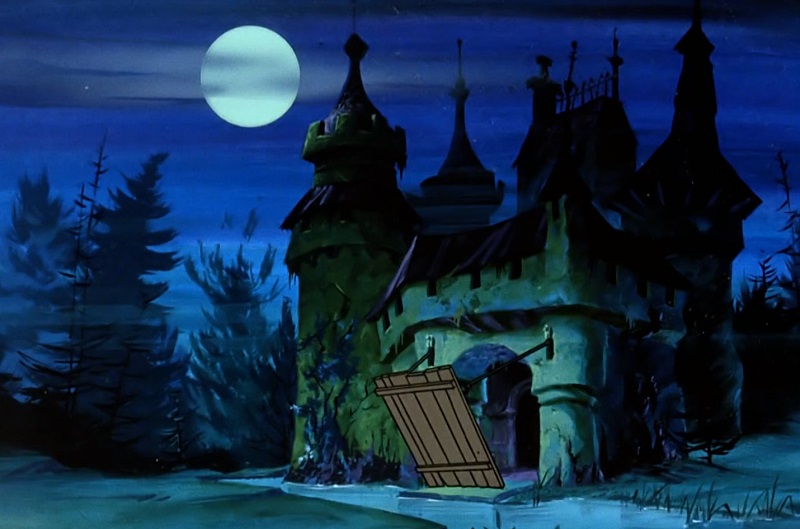 The gang get out and the drawbridge lowers so they start to walk across the bridge. A Draculaesque man greets them near the front door and tells them to turn around, or else they may not see the sun rise. Velma exclaims they have permission to visit and the man says nothing more, but transforms into a bat.

The gang begin to run away as the drawbridge rises, unfortunately Daphne is a slow runner and ends up trapped inside the castle. A Frankenstein-like monster walks towards her and chases her around the moat.

Freddy has Scooby and Shaggy swing across the moat to lower the drawbridge. Shaggy is able to remove the holding bar to lower the bridge, but our cowardly duo are chased into the castle where Shaggy uses his ventriloquism to confuse the wolfman.

Freddy and Velma walk about the castle and come across a fireplace with a warm fire burning in it. Above the fireplace is a balcony, where the Dracula figure emerges and taunts them before once again transforming into a bat. 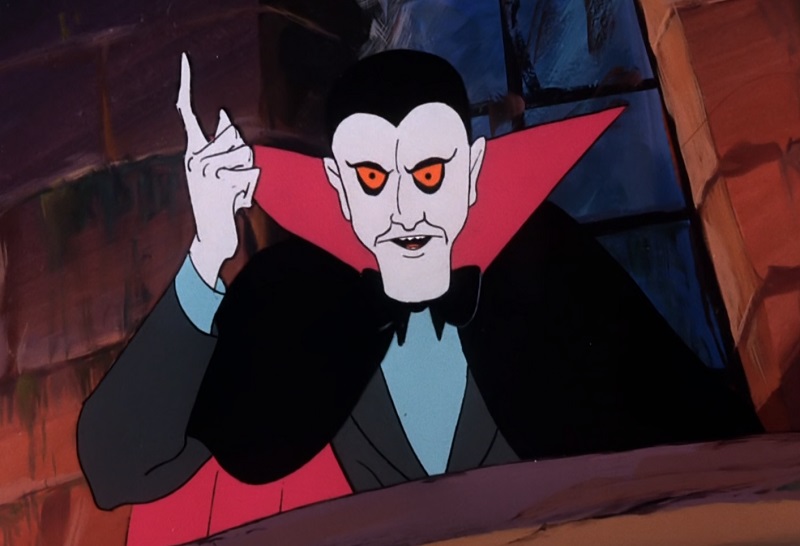 The bat swoops at them and Velma loses her glasses. Searching for them, Velma crawls into a trap door leaving Freddy behind to wonder where she vanished to.

Shaggy and Scooby end up in the Castle kitchen and search for food. There is nothing of interest, only yucky snacks like pickled vampire wings, werewolf snacks and fried moonbeams. Still hungry, Scooby opens the pantry and comes face to face with Frankenstein’s monster. A small chase ensues, and the pair escape after blinding the monster with flour. 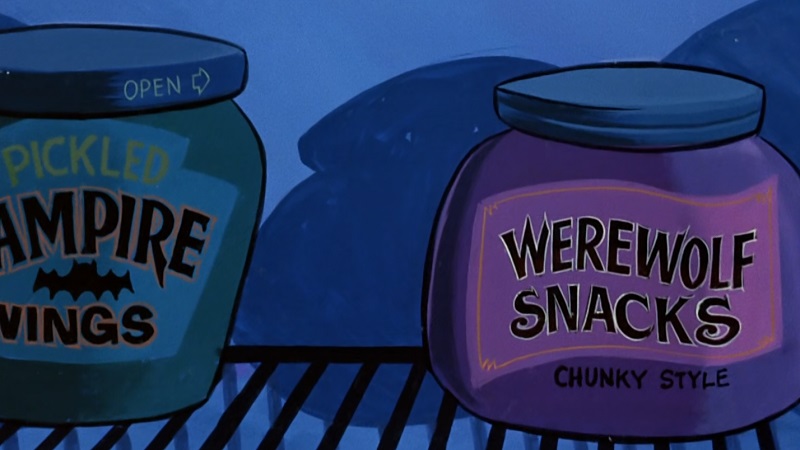 Velma has worse luck as she stumbles into the castle torture chamber which is chock full of torture devices. Still blinded, she mistakes it for the Castle playroom. Hearing a noise she runs away and hides in a barrel. The noise turns out to be Shaggy and Scooby falling down a trap door.

Scooby finds Velma after he smells Scooby Snax and Shaggy hands Velma her extra pair of glasses as he keeps a spare set in his pocket.

The trio also find Daphne who is stuck in the dungeon which they can see through a grate in the floor of the torture room. As Daphne explains what had happened, an Iron Maiden sitting in the torture room opens up and Dracula emerges.

Shaggy fishes Daphne out of the dungeon, while Scooby fends off Dracula. The four of them lock Dracula in the dungeon and escape the torture chamber by running out of the exit that has opened up in the Iron Maiden.

The four of them walk through a dark tunnel but are separated leaving Daphne and Velma wondering how they lost Scooby and Shaggy. Velma and Daphne do, however, find Freddy.

Daphne shows Freddy and Velma a clue she found that was written in 1668 on the dungeon wall. It was a message that says. ”I have fooled them all, I may perish, but I’ll be as rich as KING TUT!’ 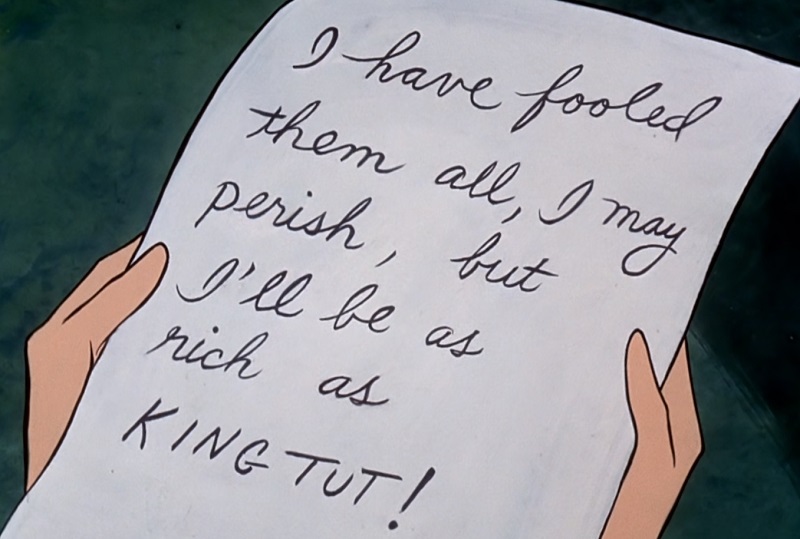 Velma states that King Tut was an Egyptian, and Egyptians had their wealth buried with them. So Freddy decides that they should pay a little visit to the Crypt after they find Scooby and Shaggy.

Shaggy and Scooby end up in a ‘mad scientist rumpus room’ which is full of chemistry experiments, and Teslaesque electronic gadgets. Fooling around with all the toys, they eventually come across Frankenstein’s monster and evade him on a gurney. 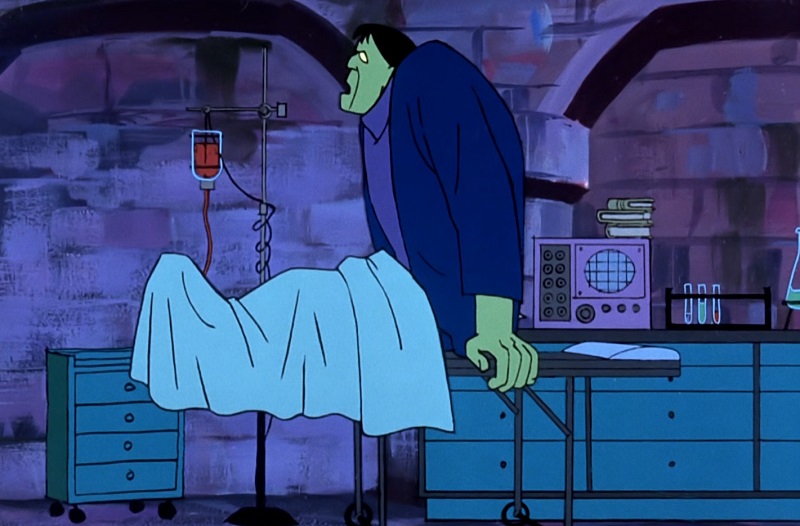 The gang finally reunite and head down to the Franken Family Crypt. One of the crypts has the year 1668 chiseled in it. Freddy and Shaggy roll the stone lid back, and inside they find the Vampire. 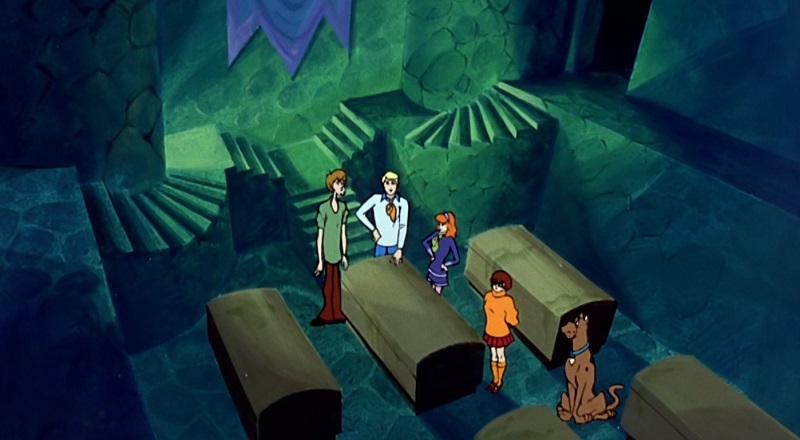 The vampire chases Freddy, Daphne and Velma out of the family crypt, while Shaggy and Scooby stay inside and create a trap using a tapestry. The trap is unsuccessful, and the vampire escapes wearing the tapestry through the concrete crypt. Freddy removes the concrete cover once more to find a ruby, a diamond and a golden earring inside.

Scooby also finds a torn piece of tapestry that has pearls and rubies sewn on it, and Velma realizes that the Franken jewels were sewn inside the tapestry. 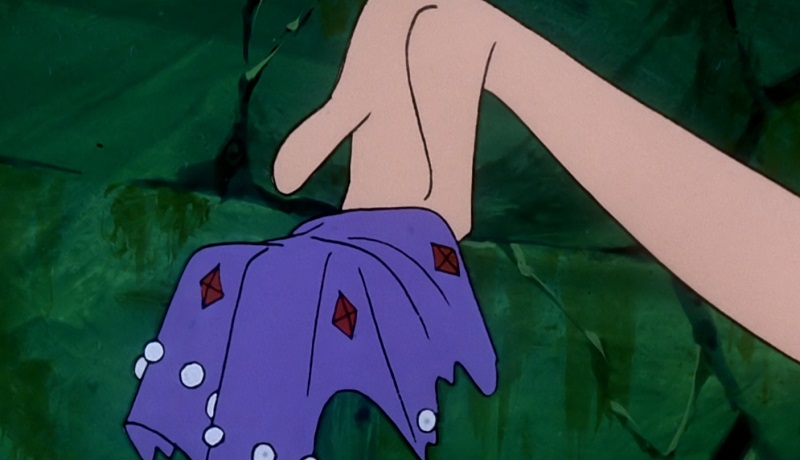 The tapestry is now gone, but Freddy figures out that the fortune teller was disguised as the Vampire due to the golden earring they found. 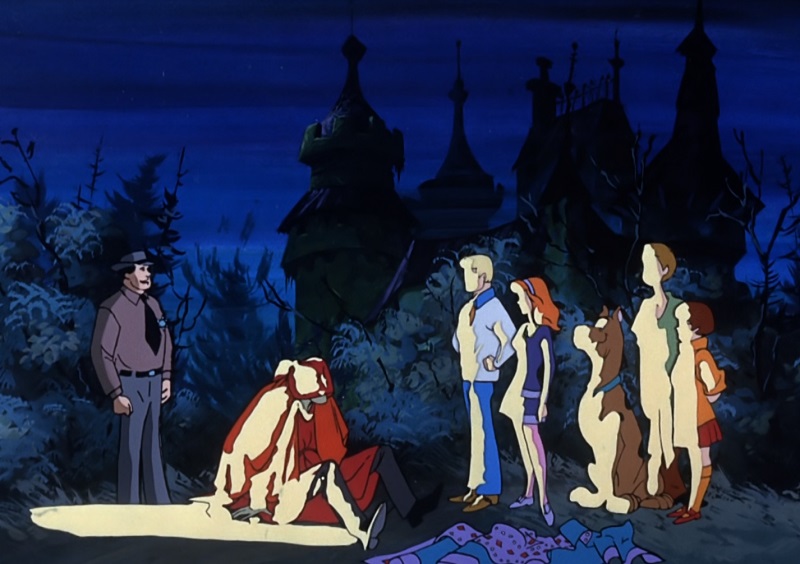 The police states that the man is Big Bob Oakley, who’s alias is ‘the Actor’ a master of disguise who is wanted in seven states. He was after the jewels, which he never would have found if Scooby and Shaggy did not try to trap him with the tapestry.

With another mystery solved, the gang enjoy a midnight picnic in front of the creepy castle where a stuffed bat on a wire swoops down and scares them. This explains how Oakley was able to transform into a bat.

Frankencastle is creepy, and has some good set pieces with the crypt, mad scientist room fortune teller, and torture chamber, however, the episode isn’t all that spooky as it is played for laughs rather than for chills.

The vampire was well done, but I don’t think they did much with the werewolf or the Frankenstein monster. For example, we see the werewolf three times, but the gang only run into him once. It may have been a better episode if they just featured the vampire.

There is some good diversity with this one in that Shaggy and Scooby plan a trap, plus we get the regular tropes we love like Danger Prone Daphne getting trapped and Velma losing her glasses.

Overall, this is a fun episode which makes for some good Saturday morning cartoon fun, but I just wish it was a touch spookier.

Next week we will be covering Scooby-Doo and a Mummy Too. Until then, Stay Spooky!