A Night of Fright is No Delight originally aired on January 10, 1970 and is episode 16 of Scooby-Doo, Where Are You! season one.

This also happens to be my favourite episode of Scooby-Doo.  From the haunted mansion on an island cliff, to the rattling chains of the Phantom Shadow, I find this episode flawless.  I especially enjoyed how the gang were required to spend one evening in a haunted house, in order to inherit a million dollars.

But enough of my jibber-jabber, let’s get on with the review!

A Night of Fright is No Delight – Episode Review

The episode opens with a spooky mansion sitting on top of an island. As the camera pans to the ocean, we see the gang approaching in a motor boat. Daphne comments that the location is a creepy enough place and night to be reading a will as it turns out that Scooby-Doo is to inherit a fortune. 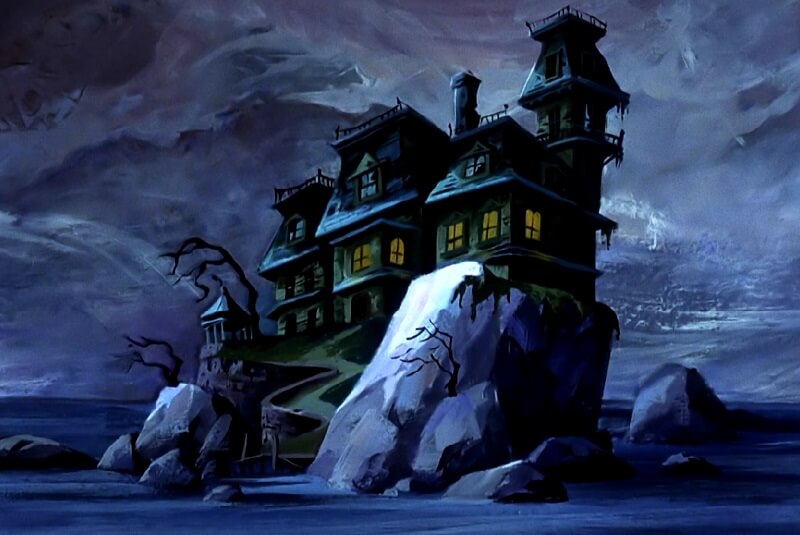 A One Million Dollar Prize

Velma and Freddy read a newspaper article explaining Scooby’s situation. The article reads: “Eccentric millionaire Colonel Bolregard Sanders leaves one million dollars to four relatives and a dog named Scooby-Doo. Scooby-Doo had rescued old Bolragard from a fish pond several years before and was remembered in his will.”

The gang then land and enter the mansion. There they meet Cosgood Creeps, the attorney of the late Colonel Sanders (not of KFC fame). His partner, Mr. Crawls could not make it this night, but Mr. Creeps plans to read the will anyway. The will, is in fact to play on a record. As the record is played, we hear Colonel Sanders voice as he speaks to the four relatives and Scooby-Doo.

The Colonial instructs that Cousin Simple, Nephew Norville, Sweet Cousin Maldihide, Cousin Slicker, and his old friend Scooby-Doo will all get an equal share of the will providing they spend the whole night in the haunted family mansion. Those who chose to leave will inherit nothing. After delivering these instructions, Mr. Creeps remarks that he will return to the island in the morning to see which of them remain, if any.

The clock then strikes ten and everyone decides to turn in for the night. Before they go to sleep, Shaggy decides to eat a “Shaggy Super Sandwich” which he tries to add fish food for seasoning, but a fish in a bowl growls at Shaggy as to not touch his food.

Scooby, on the other hand, decides to take a bath. While in the tub, the Phantom Shadow peeps in on Scooby and activates a trap door opens that spills Scooby (minus the tub) out and down a chute.

Scooby lands in the basement where he encounters the Phantom Shadow, a ghoul rattling a chain attached to his arm. The Ghoul scares Scoob, and he runs through a wall, back up to Freddy who points out that he could not have fallen down a chute as the bathtub is bolted to the ground so it could not have tipped him out. Scooby, knowing he saw a ghost, is not happy with Freddy’s logic.

The clock now strikes Midnight, and a shadow comes out of it and climbs up the main stairs into Cousin Simple\’s room. The whole gang hears the ghost\’s rattling chains and enter Simple’s room where they find a night cap and Clue #1, a dusty mirror with a message on it, which reads:

Everybody returns to their room, and Freddy has a plan, he decides to make a decoy dummy of Scooby, using a melon, some bandage and carrots. Scooby and Shaggy decide to hang outside holding onto a drainpipe. The Phantom Shadow spots the two on the pipe and pushes it away from the building. Trying to rescue them, Velma grabs the pipe, but all three end up flying out of the window, and into a secret tunnel at the edge of the island.

Velma comments that they are in a secret passage in the mansion and there they spot CLUE #2, footprints left by the Phantom Shadow, which is strange as shadows can’t leave footprints. They follow the footprints to some old civil war relics that the Colonial collected. There they run into a flying uniform, which turns out to be a duck stuck in an old jacket.

After running away from the duck, they find a secret elevator and ride it up to Cousin Slicker’s room. There they discover all four relatives are missing. Daphne says “what a night for a fright” and Shaggy responds that all that is missing is some spooky organ music, whereupon they hear an organ start playing.

Following the music, they find the organ where they find a music book that has Clue #3, a message written on it that reads: 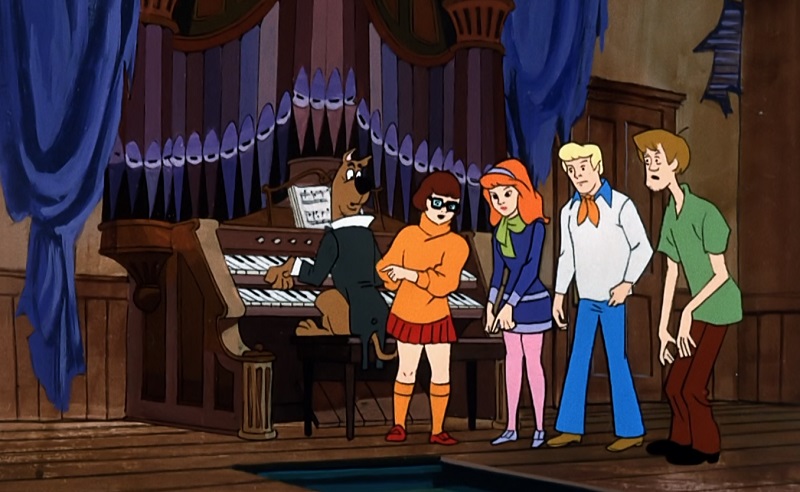 Scooby decides to play the organ (compete with a coat with tails) and the walls start closing. Before they are crushed, the walls stop and then Velma figures out that FEED means the notes F,E,E and D. She plays the four notes and the floor opens up, where there are some secret stairs that lead to a Creepy Cobwebbed filled Catacombs. There they discover five coffins, one being dog shaped. Even worse, four of the coffins open up revealing the bodies of the four relatives!

The Phantom Shadow shows up as a giggling green ghost and he has a twin ghost with him. Shaggy and Scooby distract one ghost by firing wine corks at him, and Velma distracts the other by giving him a ringing phone. Shaggy and Scooby also end up dancing with the ghosts until they drop them down the stairs by the organ. 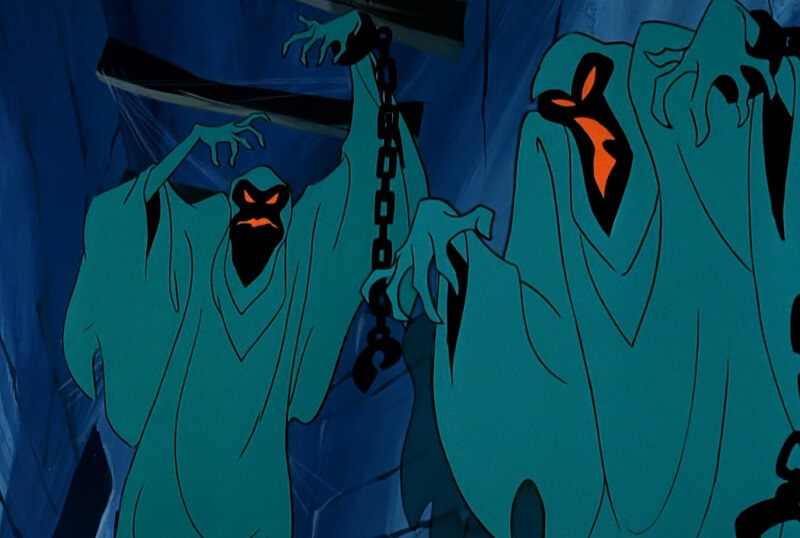 Spotting green gunk on Shaggy\’s Hands (after he danced with the ghosts), they find CLUE #4, the ghosts must be fake as they real ghosts wouldn’t leave green paint on whatever it touches.

The ghosts turn out to be Mr. Creeps and his partner Mr. Crawls who planned on getting the fortune by scaring everyone off the island. They did scare the four relatives (as the bodies in the coffins were just dummies.), but the police ended up arresting them before they could scare the gang off the island. Since Scooby stayed, he thus can inherit Colonel Sander\’s fortune, which turns out to be one million dollars of confederate money (which is useless.) Scooby spots a floating bone and chomps on it, and somebody replies that the bone is the only haunted thing that Scooby is not afraid of.

I give this episode a 10 out of 10.  To me, this is perfect Scooby-Doo.  The ghosts are creepy, scary and super memorable.  We also get some fantastic set pieces, such as the wine cellar, the organ room with the closing walls, the creepy coffins opening up, and the underground cavern with the confederate memorabilia.

I just love every last detail of this episode, especially the fun they had naming the cast, such as Mr. Creeps, or Sweet Cousin Maldihide.  The dog shaped coffin was also classic!

While there are a few chase scenes in this episode, they do push the story forward, and they never feel like they are just trying to chew up time.

Whenever I want to introduce someone new to the Scooby-Doo universe, this is the episode I always show them first!

A Clue For Scooby Doo