Spooky Space Kook is episode fifteen of the first season of Scooby-Doo, Where Are You!  It originally aired on December 20, 1969, just five days before Christmas and features the legendary Scooby-Doo monster, the Spooky Space Kook.

Enough of the trivia jibber-jabber, Beam Me Up Scotty!

The episode begins with a UFO flying over a countryside road and landing.  The Spooky Space Kook emerges from the UFO and walks down a desolate road before letting out out a sinister laugh. 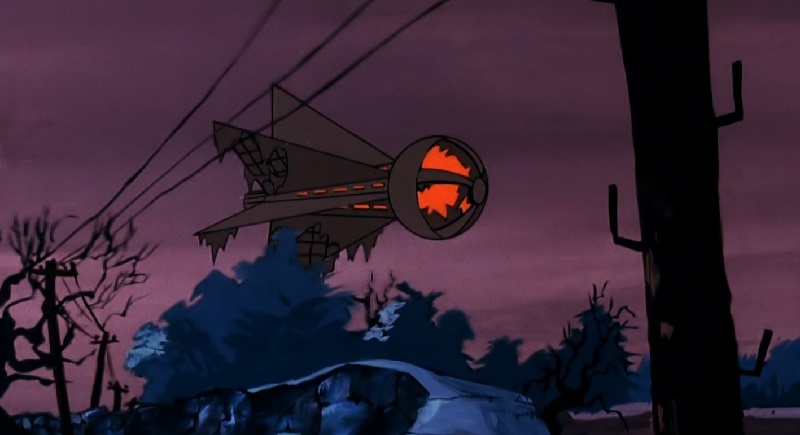 Driving in the Mystery Machine down an old country road, the gang run out of gasoline.  Fortunately, they’re near an old farmhouse, so they head over to see if they could buy some.  At the farmhouse, they meet a grizzled farmer who initially mistakes them for reporters and confronts the gang with a shotgun.  This might be the first and last time we see a gun in the Scooby-Doo series (I still need to look into this)

The Farmer explains to the gang that he’s been pestered by reporters ever since a UFO and a Ghost Astronaut have been sighted.  As Scooby and the Gang get up to date on this newest mystery, they spot the Spooky Space Kook’s glow in the dark footprints off to the side.  Daphne exclaims that she’s never seen footprints like that before and the Farmer explains that he sees them all the time. 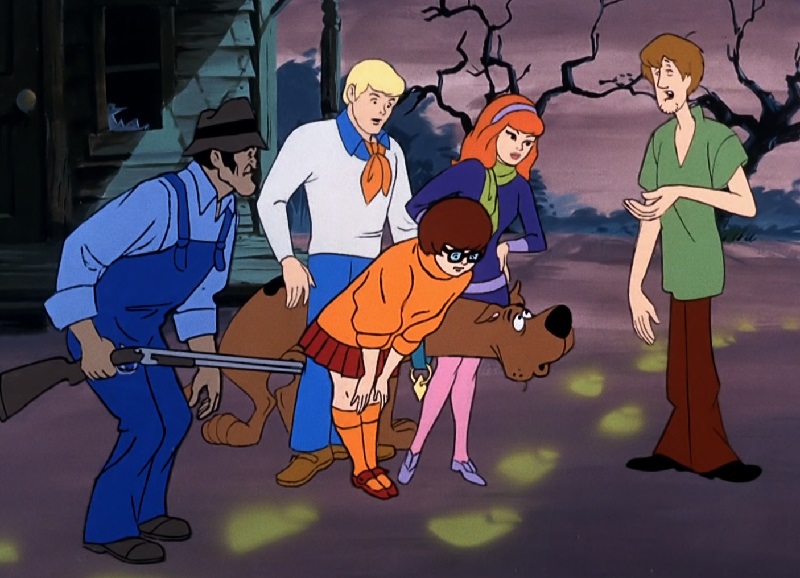 The Farmer gives the gang some gas, and they drive off to look for the Spooky Space Kook.  They don’t have to drive too far before they see the UFO in the evening sky.

The UFO lands behind a hill and the gang drive to where they think it landed.  What they find instead is an abandoned airfield, which is a graveyard for old planes.  On the ground they spot more of the glow in the dark footprints.  Following the tracks to an old shed, they hear an electronic noise within.  Opening the door, they find a generator, and it’s still warm from use.  The gang split up, and it doesn’t take long for Scooby and Shaggy to run into the Spooky Space Kook. 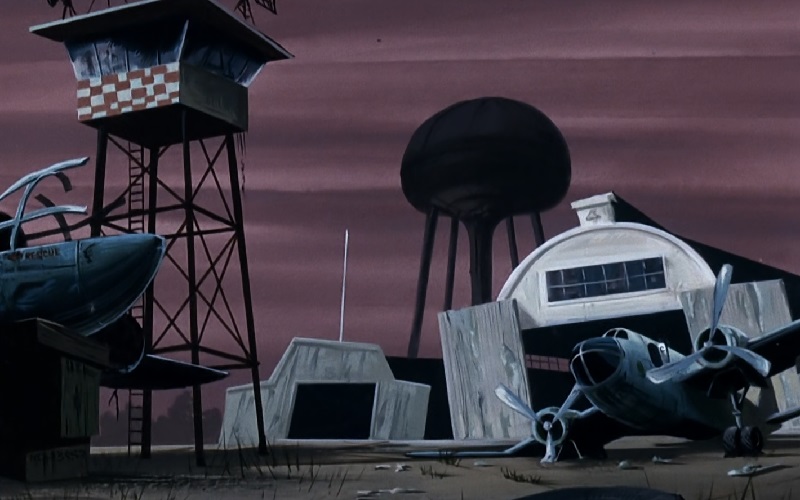 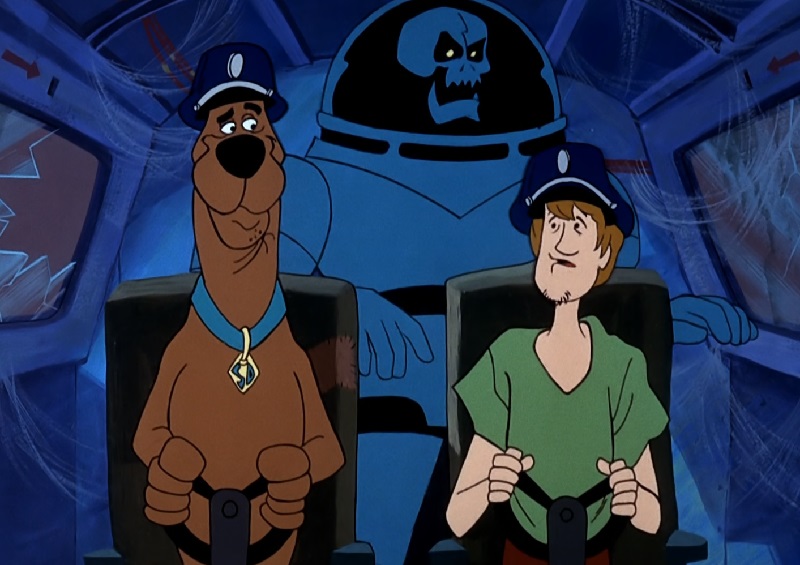 The ghost alien chases them into an airplane where they evade the monster with some clever thinking.  Meanwhile, Fred, Daphne and Velma inspect the Airport\’s ruined Machine Shop.  Daphne comments that everything is extremely greasy, and Freddy realizes that this is a clue as it means the tools have been recently used.

Unbeknown to Freddy, the Space Kook has released a hoist, and it snags Freddy, lifting him high in the air.  Velma and Daphne can’t figure out how to get him down, so they run off looking for Scooby and Shaggy.

Scooby & Shaggy soon meet up with Daphne and Velma, and they release Freddy from his hoist.  The reunion is soon interrupted as the Spooky Space Kook makes his entrance.  Terrified, the gang quickly split up and scram.

Scooby and Shaggy end up at the Mess Hall where they discover some fresh Ham and Chicken.  Realizing that an Alien shouldn’t have groceries in the fridge, they head off to find Freddy to tell him about their clue.  Before they get too far, they run into the Space Kook and find somewhere to hide.  Meanwhile, Freddy, Daphne and Velma, who are outside by an old hanger, find a newspaper in an old barrel.  The newspaper is from the day before, and it’s covered in glow in the dark fingerprints. It’s also an article about the UFO sightings near the abandoned Airport. 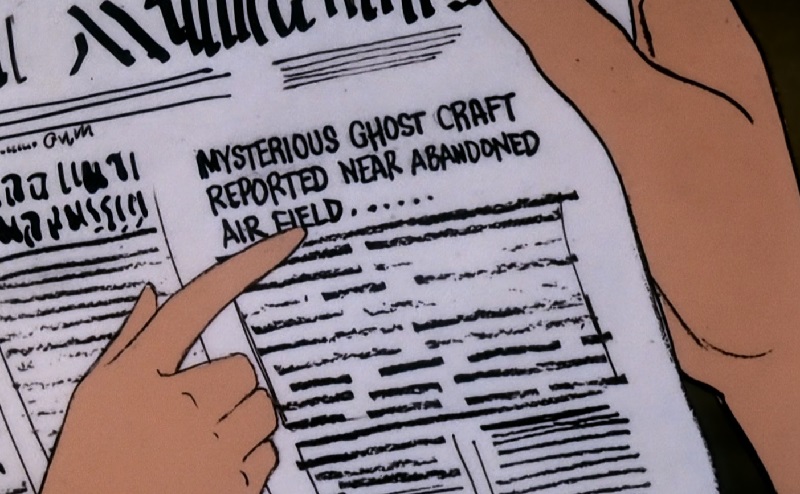 After several more terrifying encounters with the Space Kook, the entire gang gets back together in a motor pool.  Underneath a busted down Jeep, Scooby finds the scent of gasoline overpowering.  Velma smells the jeep and declares that it has been running recently.  The jeep looks like it has four flat tires, but looking underneath, they find an extra set of wheels.

The jeep fires up and drives off on its own.  If that isn’t enough to startle the gang, the Spooky Space Kook leaps out of an abandoned military van.  Even more bad news!  An army of Space Kooks emerge from additional bays. 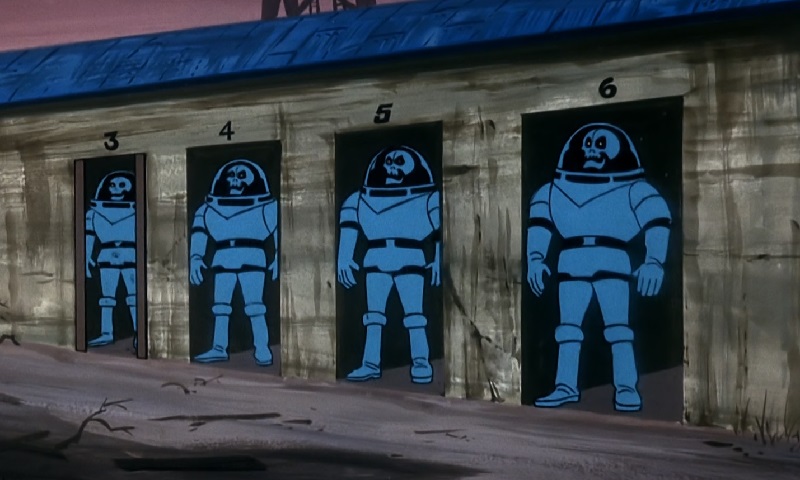 This is more than enough to frighten Scooby and Shaggy off, so they run up a tower ladder, where they find a control room with a microphone and a projector.  Figuring out that they’ve been bamboozled, Shaggy signals for Freddy and the girls to come up to the tower.

The Ghost Alien beats Freddy and the girls up so Shaggy and Scooby parachute off the tower to safety.

Landing at the base of the tower safely, Shaggy is greeted by the Farmer, along with a sheriff.  The Farmer explains he got worried about the gang and called the police.

The Space Kook makes a dash for it by hiding in a wind tunnel but is foiled by a clever Freddy who fires up the tunnel and sends the Space Kook’s costume flying off.

Inside they find their culprit, wearing just his street clothes.  The Farmer identifies him as Henry Bascomb, his next-door neighbour.

Back in the tower, Shaggy reveals how Henry was using a projector to emulate a UFO, and all the creepy voices were a speeded up laugh over a loudspeaker.  The army of Space Kooks were all stuffed dummies, and the self-driving jeep was run by remote control.

It turns out Henry figured out the Airport would be reopening and would be expanding.  So his goal was to scare off all the neighbouring farms, where he could buy the land cheap, and sell it to the Airport for a mint.

I give the Spooky Space Kook a 10 out of 10.  With a creepy villain, spooky atmosphere, and oodles of jokes, this is one of the perfect Scooby-Doo episodes out there.  The Spooky Space Kook’s laugh is amazing, and bone-chilling every time I hear it.  And the design of a skull in an astronaut suit is genius.  The glow in the dark footprints has stuck with me for decades since I saw this episode as a young tyke 35+ years ago.

If I had a complaint, it’s that this episode doesn’t let you piece together the mystery as you are only introduced to Henry at the very end.  The remote control jeep didn’t make much sense either.  But that’s just nitpicking, as this is a kids cartoon after all.

How would you rate this episode?

Let me know in the comments below!

A Gaggle of Galloping Ghosts