Don’t Fool with a Phantom is the eighth and final Episode of Season 2 of Scooby-Doo, Where Are You! And originally aired on October 31, 1970.

For some fun trivia, we see that the Gang carry a scooter in the back of the Mystery Machine. I’d like to think it’s the same one that Shaggy borrowed from Charlie in Decoy for a Dog Napper.

The chase song used in the episode is Pretty Mary Sunlight, and a year later, we’ll see this song turn up again in The Phantom of the Country Music Hall, where it is performed by Jerry Reed.

We also get a strange and random appearance of Black Widow from Space Ghost appearing in the Wax Museum.  She has no lines, but does hand Scooby and Shaggy a bowl of fruit.

Don’t Fool with a Phantom is rarely discussed amongst Scooby fans, but does this mean that this is a bad episode? Let’s find out.

The episode begins on the set of Johnny Sand’s Dance Game Show from KLMN studios. Freddy and Daphne are on stage dancing and receive a round of applause when they finish. Scooby and Shaggy are next, and perform a unique dance called the toffee twist.

Mr. Stevens, the station manager, comments on how Scooby and Shaggy might win the dance contest, however, Velma isn’t so sure as our hungry duo think it’s an eating contest.

During Shaggy and Scooby’s dance, the lights go out and a large shapeless figure appears glowing on the stage. The lights turn off once more until Fred, Daphne and Velma find Johnny Sand tied up and the station’s safe raided. 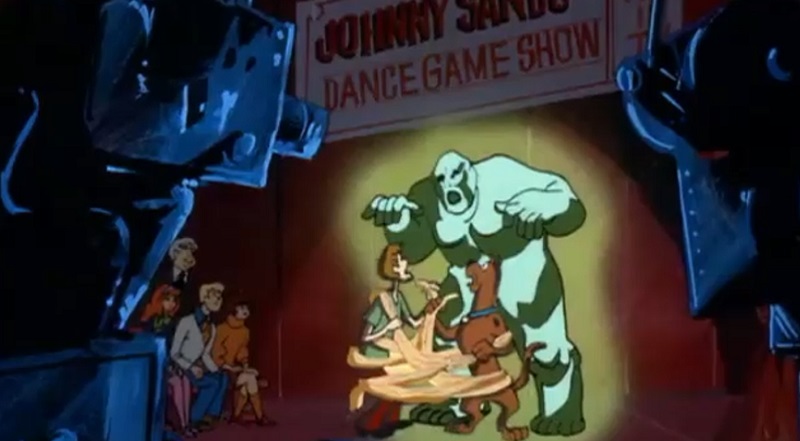 Johnny explains that recently the station has been receiving threatening letters that were signed ‘the Wax Phantom. Johnny goes on to say that several years ago the station had a wax figure maker named Grisby on the show, but then cancelled him. This old eccentric man promised revenge to bring one of his wax characters to life and destroy them all.

Freddy notes that the safe is empty and Mr. Stevens is missing, stating that the station manager must have been taken hostage. Meanwhile, Velma ponders that since the Wax Phantom is 9 feet tall, it would be difficult for him to disappear easily on his one, let alone with another human being. Daphne realizes that the only way for this to happen is if the curse of the Wax Phantom is true.

Freddy spots wax footprints on the ground and they stop at the window where they are 10 feet up. Freddy wants to call the police for once, but Johnny says ‘no’ since the station is in enough trouble and can’t afford any negative publicity.

At Mr. Grisby’s house, Mr. Grisby allows the gang to enter, and randomly comments on how there is a cemetery nearby. Velma inquires about the TV station incident, and Grisby tells her that he knows all about it from his crystal ball. 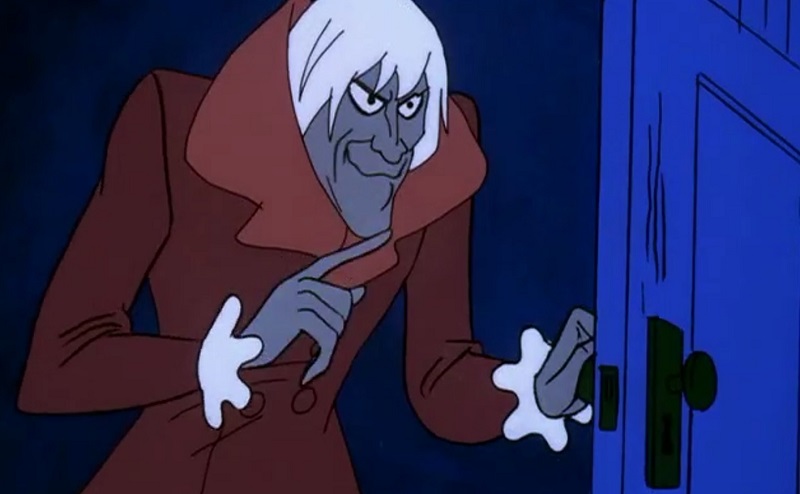 Holding up a miniature figure of the Wax Phantom, Grisby is happy to report that his black magic has worked. Afraid that Grisby’s curse is real, Velma, Shaggy and Scooby rush to the Wax Museum to warn Freddy and Daphne.

We then cut to the Wax Museum and the Mystery Machine pulling up. From the interior of the Museum we can see the Wax Phantom in a display room. Outside, Freddy notes that the museum looks closed for the evening.

Since the front door is unlocked, the two head in. As they tour the building, the Wax Phantom can be seen locking the door so no one else can enter. The Wax Phantom then makes his appearance and gives the two a chase.

Velma, Shaggy and Scooby show up at the museum and since the door is now locked, but the Mystery Machine is outside, they decide to break in. Once in the building, Shaggy turns on the lights and is instantly terrified by the wax monster displays before being terrified by the real Wax Phantom.

Running away, the gang all bump into one another and everyone is reunited. Velma spots a new clue, which says ‘Speedy Airlines Ticket’ where the destination is to South America. They also see that the Wax Phantom display is empty.

Back to where Freddy, Daphne and Velma are trapped, Velma finds a bag full of money that was stolen from the TV Studio. Velma also triggers a switch that opens a door where they can now escape the room. Here they see Shaggy and Scooby set to be turned into Wax Dummies where they are tied up and set off on a conveyor belt that is heading towards a vat of wax.

Daphne falls and reverses the conveyor belt freeing up Shaggy and Scooby who are once more chased by the Wax Phantom. A chase song for Pretty Mary Sunlight happens and we get our normal hide and seek gags until Scooby and Shaggy eventually meet up with the rest of the gang.

Freddy then decides to set a trap by fighting wax with wax. The plan fails as normal but they eventually catch the Wax Phantom in a Wax Shower, along with Scooby and Shaggy.

Calling the local sheriff, Freddy chisels out Shaggy and Scooby first, before revealing that the Wax Phantom is Mr. Roger Stevens, the local TV Station manager.

Stevens wanted everyone to think that kooky Grisby was the mastermind behind the theft and Steven’s disappearance as Stevens planned on flying off to South America with all that money and without a trace.

With another Mystery solved, the gang head off in search of their next adventure.

While the Wax Phantom himself isn’t all that memorable in terms of his design, this episode had a lot of fantastic set pieces and spooky moments.

With Mr. Grisby’s house chock full of black magic props, along with his eccentric behaviour, even the normally logical Velma was spooked.

The Mr. Grisby reminded me a lot of High Rise Hair Raiser when they visit the Crabb home and meet Ebeniizer’s Crab’s great great great granddaughter.

The Wax Museum was also rather cool, although a little bit weak on the props. In future episodes, like A Frightened Hound Meets Demons Underground we get some amazing call back statues, but in this episode they are a touch generic. How awesome would it have been to see the Spooky Space Kook or another classic villain statue slipped in behind the scenes.

For me, this was one of the stronger episodes of season 2, as while it had some laughs, the episode always maintained some tension. The episode also worked in a decent mystery with a fun red herring.

Well, that wraps up another mystery along with my reviews of Season 2 of Scooby-Doo, Where Are You!