The Phantom of Country Music Hall guest stars Jerry Reed and originally aired on December 9, 1972. It is episode 14 of Season 1 of the New Scooby-Doo Movies.

This episode takes place in Nashville Tennessee where Jerry Reed invites the gang down to watch his show as the Grand Ole’ Country Music Hall reopens after a year of being closed. Unfortunately, Jerry is kidnapped by a Phantom, thus the gang have another mystery on their hands.

Throughout the episode Jerry sings ‘Pretty Mary Sunlight’ which is a song we previously heard in Season 2 of Scooby-Doo Where Are You, with the episode ‘Don’t Fool with a Phantom’. Jerry is probably most famous for his song ‘When You’re Hot You’re Hot’. Which I know most from the muppets.

Jerry also started in a dozen movies, most notably The Smokey and the Bandit series and the Waterboy. Jerry unfortunately passed away on September 1, 2008.

But enough of my Jibber Jabber, let’s get on with the review.

The episode begins with the gang driving through Nashville in the Mystery Machine to see Jerry Reed’s opening. They stop at the Andrew Jackson Hotel where the receptionist tells them that Jerry Reed isn’t there.

The receptionist hands Freddy a note that says “Come to the Grand Ole’ Country Music Hall – I’m rehearsing there for tomorrow night’s show.” 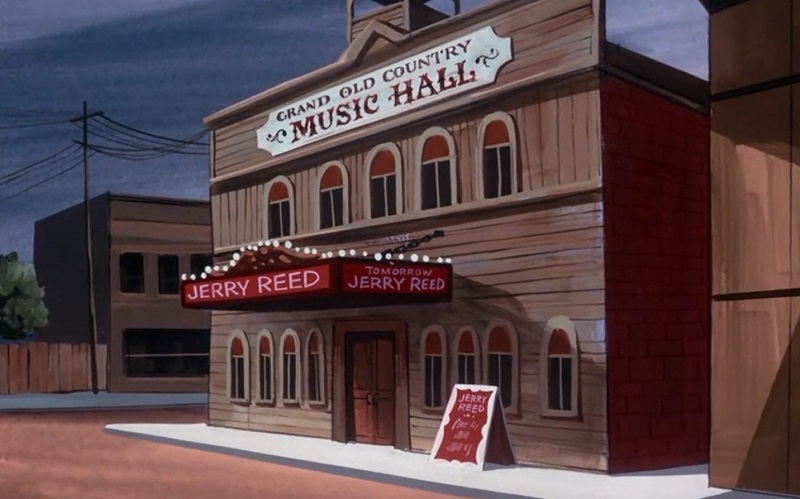 The gang leave the hotel and head to the Grand Ole Country Music hall. The hall has been closed for a year, and they want to open with a bang so they scheduled Jerry Reed in.

The doors are locked and no lights are on, which the gang find unusual. Sniffing at the door, Scooby finds another note that says Jerry Reed – If you try to rehearse tonight you’ll never see tomorrow – The Phantom.

The gang find a way into the Grand Ole’ Country Music Hall by McGuyvering their way in through a second story window. As they split up to search for clues they meet the Janitor – Bertha, who wants them to leave. Freddy explains they’re looking for Jerry and then calls up a mysterious person stating that they have snoopers.

In the theatre room, the gang turn on the lights and the stage backdrop moves their eyes at them before the whole thing falls nearly hurting the gang.

We then hear Jerry Reed begin playing, so the gang starts to follow the music. Upon opening the first door they meet a rather large man who explains that Jerry isn’t there, and the music they hear is just a recording. The man introduces himself as Ben Bing and he is Jerry’s arranger.

Ben leads the gang back outside and tells them that Jerry is at the local Pizza Parlour, and that’s where they should head off too. Shaggy also comments on Ben’s license plate that says FEBAG.

The gang drive off to the Pizza Parlour and on the radio they hear the second national bank was robbed of 2 million dollars as they chomp down on pizza. 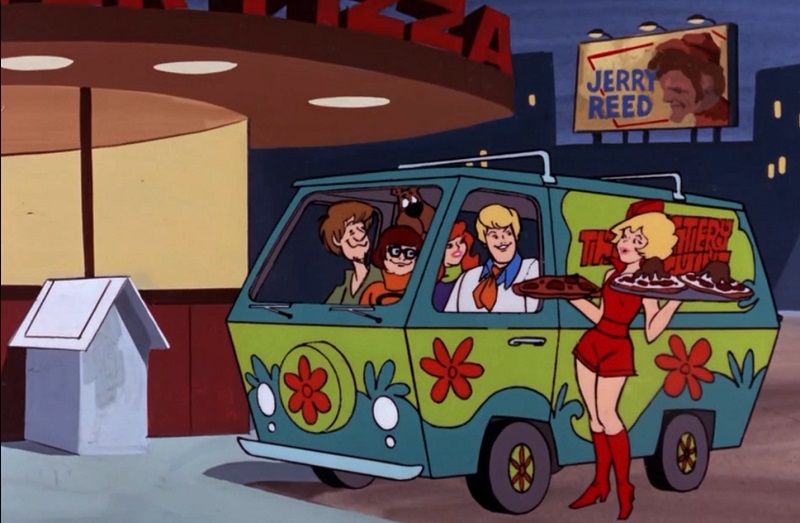 After a quick snack, the gang head back to the Country Music Hall and once again the hall is locked up. Bertha and Ben do their best to keep the gang out by locking the doors and windows, but Velma finds a way in.

Inside they hear Jerry’s voice singing and the gang split up to investigate. Throughout their search the gang encounter plenty of weirdness, such as living statues of a Viking and Davy crocket. Throughout all these hijinks Jerry continues to play ‘Pretty Mary Sunlight’ that the gang can hear through the vents. 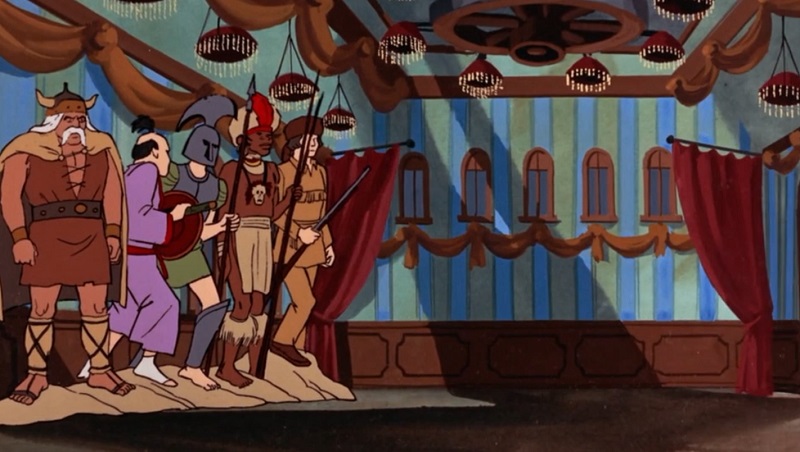 Velma also is able to talk to Jerry who explains he’s in some room locked up. Freddy finally finds the right door and knocks it down, rescuing Jerry Reed.

Jerry explains that he was standing on the stage rehearsing and the lights went out, and after hearing some chains clanking, he found himself locked in the room.

Jerry tells the gang to head back to the hotel while he remains and continues to rehearse, but Freddy won’t hear about it. Bertha barges in and once again tells the gang to get lost. During their conversation, someone has swiped Jerry’s guitar.

The gang asks Jerry about Ben Bing and Jerry explains he’s never heard of the man, nor does he have an arranger. 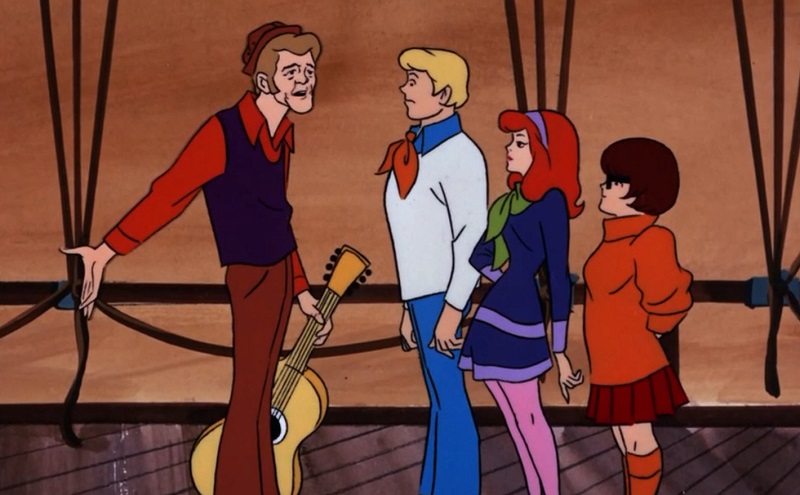 Everyone splits up once more to look for Jerry’s guitar with Velma and Jerry heading one way, Scooby & Shaggy going another and Freddy and Daphne heading off in another direction.

Everyone reunites and Velma decides it’s time for a trap. Using Shaggy and Scooby as bait, we watch as the Viking and Davy Crocket chase Scooby and Shaggy. Velma’s trap goes off without a hitch and they discover Bertha is a man and disguised as Davy Crocket, meanwhile Ben Bing is dressed as a Viking. 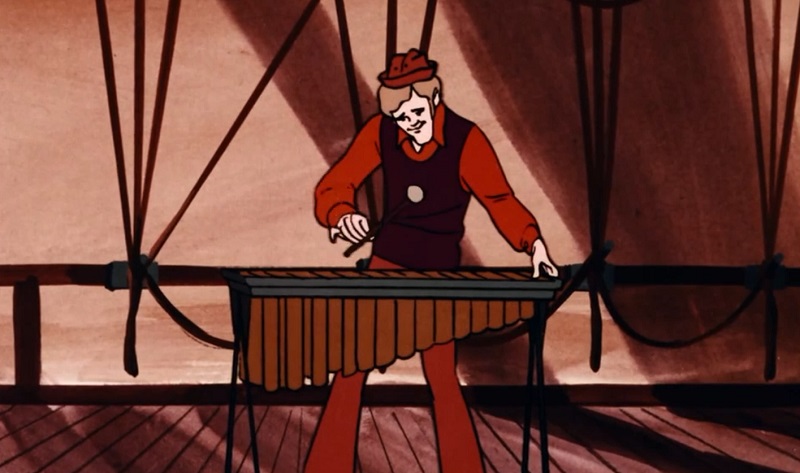 A note with FEBAG falls from Ben, and Jerry picks it up recognizing it as musical letters. Remember Shaggy talking about a haunted Xylophone, Jerry uses the keys to put in FEBAG and a secret panel underneath the stage opens revealing the 2 million dollars stolen from the bank.

Ben and Bertha spent a year while the opera was closed to dig a tunnel so they could rob the bank. The sheriff congratulates the gang and heads off with the criminals.

With another mystery solved, Jerry puts on his show the next evening with the gang getting front row seats.

While there’s nothing spooky about this episode, we do get a lot of time with the gang just acting as kids. I really enjoyed the scenes of them driving around in the Mystery Machine, or eating pizza.

Jerry makes for a great guest star and his appearance is kept at a minimum. For the first half or so, he is the Mystery which I thought was a unique take. During the second half, he keeps the story moving along at a quick pace.

The Viking villain and Davy Crocket villain sucked. I wish they just kept it at Ben and Bertha as they were much more creepy without the lame costumes.

The Grand Ole’ Country Hall was also a neat setting and they took full advantage of all the props and trap doors a Hall would have. Every major city has a theatre, and there are always stories of them being haunted. If you have an old theatre in your city, do some research to see if it has any ghosts!

So, overall, this was a middle of the road episode for me. It wasn’t great, but it didn’t feel stretched out or padded like many of these other episodes either. I also found Jerry Reed’s involvement charming, and made the episode stand out a little bit more.

Next week I will be covering The Caped Crusader Caper and until then, stay spooky!