The Frickert Fracas is the 4th episode of the New Scooby Doo Movies and originally aired on September 30, 1972. Here we see the gang exploring a farm with Johnathan Winters in search of a formula that can turn a regular chicken – 6 feet tall. We also get a creepy Scarecrow villain attempting to scare everyone away.

I didn’t know much about Johnathan Winters going in, but he’s pretty funny in this episode. I remember him best from the sitcom Mork and Mindy, however, if you aren’t in the 40+ range, I wouldn’t be surprised if you knew him at all.

With a scary Scarecrow as the main villain, I had high hopes this would be a spooky episode. Yet with a comedian as the main star, I feel this will mostly be played for gags. Will this be a spooky gem, or will it be a corny hunk of coal. Let’s find out!

The episode begins with the gang driving through the country in the Mystery Machine. Freddy’s getting low on gas, so they pull up to a gas station. The attendant is Johnathan Winters who cracks a few jokes. 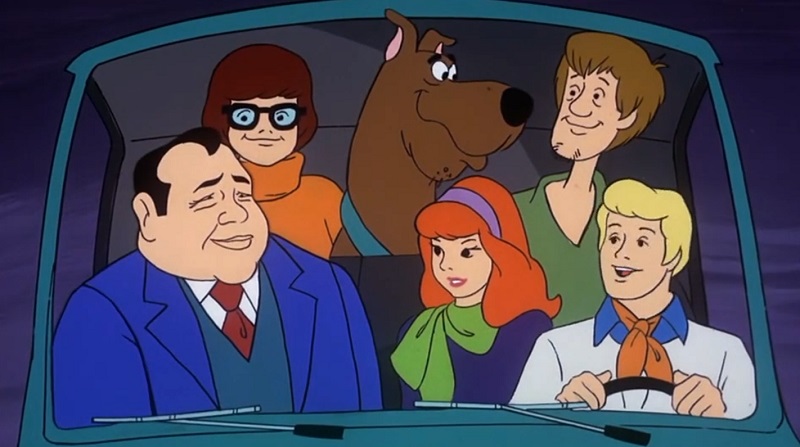 Jonathan Winters explains he’s actually waiting for his car to get repaired, and he’s on his way to the Frickert Farm. Freddy offers him a ride, and Scooby and Shaggy are excited for a home cooked meal.

The gang decided to spend a few days on the farm to help out Maude Frickert’s farm. But as they drive in, a possessed scarecrow gives them an evil look.

A serine week of peace and quiet is interrupted as soon as they arrive as they watch a farmhand run off a couple of hippie motorcyclists. 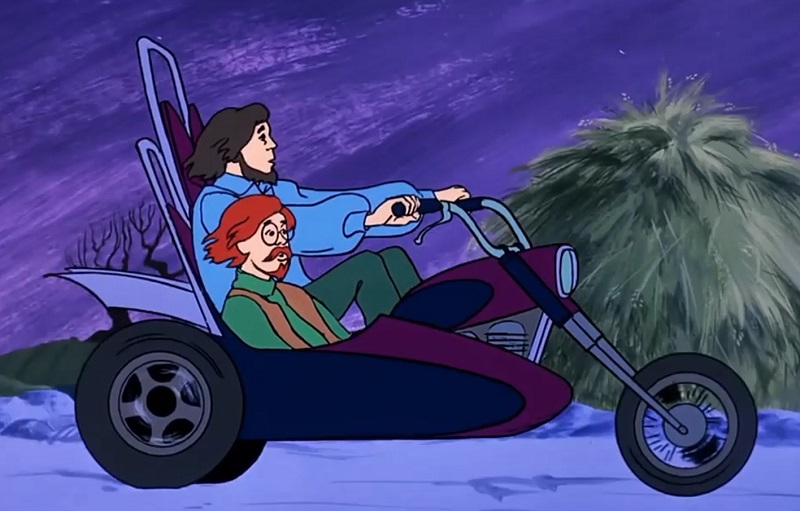 They soon run into the farmhand who explains his name is Vernon Crow, Maude’s handyman. He tells them they are trespassing and if they are out here looking for a secret formula, they better get lost.

Jonathan Winters does his Maude Frickert imitation, and convinces the handyman to show them into the house. Inside we meet Maude who explains she has a secret formula hidden left over from her grandpa for a chicken feed that can make small chickens grow to 6 feet. Somewhere on the farm she has a few chicken feed samples that she can sell for millions.

Maude also explains she’s opening a chain of chicken stands so she needs that money to get her dream going.

A new person, named Simon Shakey shows up, and is revealed to be Maude’s banker. Simon tells him the bank won’t approve the loan, and Simon is asked to leave.

The gang offers to find the giant chicken feed samples, and split up to find the formula. Outside they see the snoopers so we get lots of hijinks of the gang looking for the snoopers and the chicken feed samples. Maude takes a liking to Freddy, so we get a first with Freddy going off alone for once. Meanwhile Scooby and Shaggy go off with Johnathan Winters, and Daphne and Velma go off together.

The scarecrow also causes havoc as the gang searches, and after about 20 minutes, they capture the hippies who explain they are in the music business. They want to rent the farm to hold a rock festival like Woodstock. Maude’s in if they can get them Glen Campbell.

The hippies explained they always had to run away as Vernon kept chasing them away. The hippies also explain they were not dressed up as the scarecrow. Thus, another mystery remains.

With Vernon missing, they suspect him as the Scarecrow, but Johnathan Winters isn’t convinced as Vernon was with Scooby, Shaggy and himself most of the time.

Scooby and Shaggy also find the chicken feed samples, where a chicken ends up eating them all and growing to a huge size.

We get about 15 more minutes of the gang looking for the scarecrow, running away from the scarecrow, and chasing the scarecrow until they finally capture him. Removing the mask, it turns out to be the Banker – Simon Shakey.

Simon was going to find the secret formula and open up his own Chicken Stands. Vermin then shows up with the Sheriff, as he was getting spooked out earlier and wanted to put an end to the Scarecrow haunting.

Simon goes off to jail and Maude explains the growth is only temporary, so his plan never would have worked anyway. With another mystery solved, the gang plan on staying on the farm for a few days longer until the rock festival happens.

I give this episode a 5 out of 10. While I liked this episode, it’s 80% just one long chase scene, and it’s mostly played for gags. The scarecrow looks cool enough, at least when his eyes are blacked out. But then they sometimes switch to human eyes, which doesn’t make him scary at all.

I did find it funny Johnathan Winters played himself and Maude, who’s just Johnathan Winters in grandma drag. This bit was pulled from his comedy albums from the 60s and 70s and the humour doesn’t hold up too well in this day and age.

Overall, this is below average, but if you are a Johnathan Winters fan, or a fan of the funnier side of Scooby, I could see you liking it much more.

Join me next week when I will be covering A Good Medium is Rare. Until then, Stay Spooky!