A Good Medium is Rare is episode 6 of the New Scooby-Doo Movies and originally aired on October 14, 1972.

Here the gang meet Phyliss Diller, a popular comedian from that era. Someone is after Phyliss’ jewels, and it’s up to the gang to find out.

Phyliss doesn’t necessarily play herself, but a comedic version of herself where she’s super wealthy from being a gold-digging widow.

The episode begins with the gang walking out of the movie theatre where Shaggy is frightened by the films they just watched. They had attended a double feature of two movies including the Island of Ghosts and the Creeping Phantom. Two films that I’d love to see for sure! 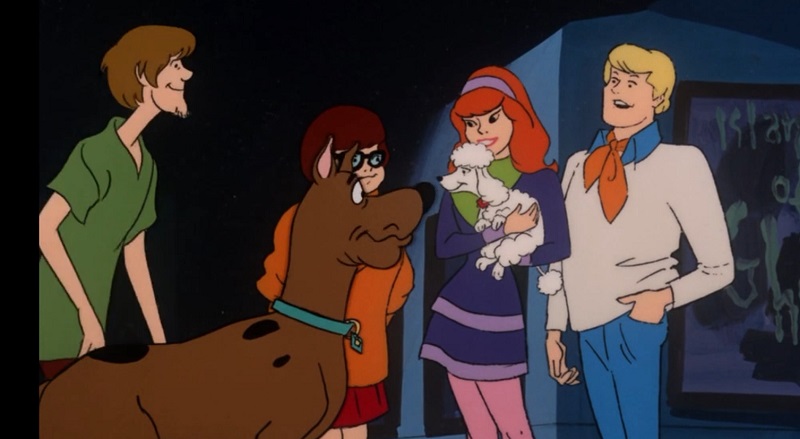 Outside they find a poodle with a diamond collar, and on the dog tag they find an address, so they return the poodle.

At the address, they find a big and creepy house with a talking gargoyle gate. They are invited into the house by Lucas the butler who calls for the castle owner. The owner turns out to be Phyllis Diller, who is first introduced with a cigarette in her hand. Yep, this cartoon is definitely from the 70s.

Phyllis promises the gang a generous award and goes on to explain the hallway is from an ancient castle, haunted by the banshee of Glaukmora. 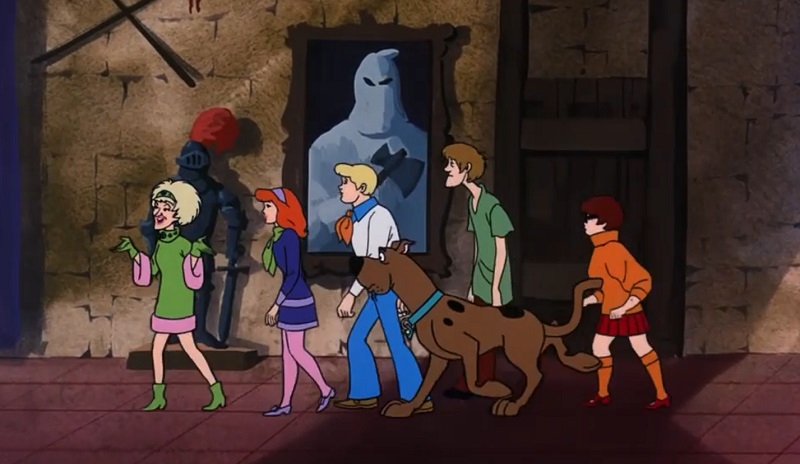 Inside the hallway they hear the banshee wail, but Velma writes it off as the wind. Phyllis rips out some old-timey jokes as they continue the tour of the castle, and Shaggy spots lots of weirdness where they are being watched that the other gang are oblivious too.

Lucas the butler then calls on Ms. Diller and brings them to the library that has been torn up and vandalized. Phyllis explains that she has a hidden stash of jewels that the burglar is trying to break in and find. They also find a bag with the initials MM on it but before they can inspect it further, the thief snatches it and runs away.

Freddy, Daphne and Velma chase after the thief which leads them into a graveyard. Outside, they encounter a haunted gargoyle statue which takes chase after them.

Everyone heads off to the Magic Mansion and Velma suspects there is a connection between the Mansion and the bag with MM on it.

At the Mansion we get plenty of more spooky shenanigans and we also meet Madame Zokar who is one confused lady. We also meet Alberto, the doorman at Magic Mansion. 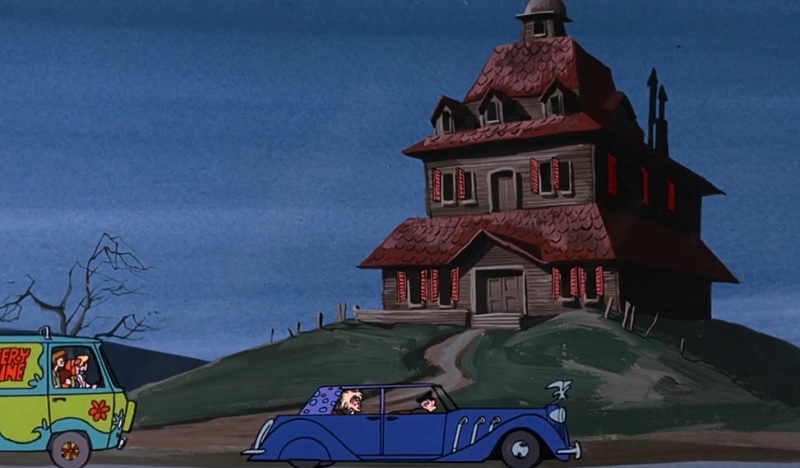 Madame Zokar gives a séance and Phyllis gets a chance to talk to Wilbur who says he’s worried about all the jewels he gave her. Alberto is also attending the seance, and Mystro also pops in to listen in. Phyllis tells him that they are in a wall safe behind his portrait and the safe can only be opened at the stroke of midnight. 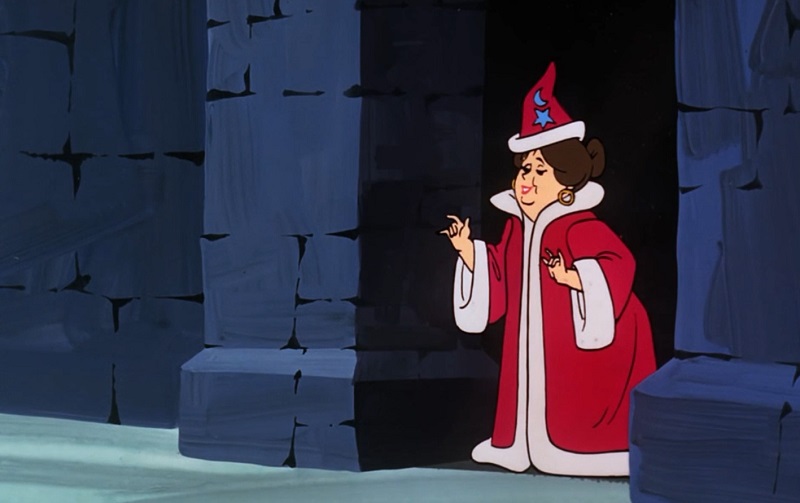 After explaining to Phyllis that the séance was one big scam to get her jewels, the gang try to escape the Magic Mansion, but they are locked in by the owners. Since it is 11pm, they only have an hour to get back. Freddy disguises everyone as furniture movies, and they escape during the great Mysto’s magic show which is being held at the Magic Mansion.

Escaping the mansion, it’s now 11:45 and the gang race back to the Castle. Phyllis is in her limo with Lucas driving and the gang are in the Mystery Machine. A fallen tree that was cut down on purpose separates the gang, and they are sent off on a detour that sends them down a river on a raft.

Eventually making it back to the Mansion, the gang make it back at 11:50, but the front door is locked, so they sneak in through an open window. A nosey neighbor calls the police on them as the gang climbs in.

Inside the gang run into the Mysto the Magician as well as two spooky men in trench coats and grey skull like faces wearing fedora hats who chase them about the castle. We get a long chase scene and we find Phyllis tied up in a grandfather clock at 1 minute before midnight. Lucas the butler is also missing.

The gang run to the room with the safe and hide and wait for the villain to show up and steel the jewels. Before they can confront the thieves, the police show up, and the thieves turn out to be Alberto (the doorman from the Magic Mansion) and his accomplice. Lucas shows up and explains he was locked in the linen closet. Lucas also explains his wife is Madame Zokar. 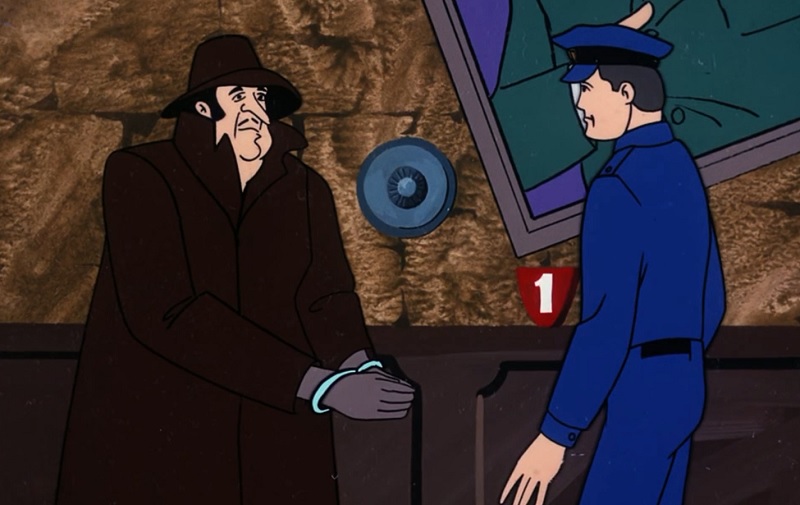 This episode is wacko crazy, and while not scary at all, there’s so much insanity going on that I enjoyed the heck out of it.

The art style in this episode looks great (at least on Blu-ray), which is one of the reasons why I think I enjoyed this episode so much. Unlike some of the earlier episodes which had some choppier animation, everything here looks crisp and clean.

The jokes in this one hit the mark for me in this one. The bridge operator we see near the tail end is funny as heck as he’s super incompetent at his job. The cheesy magician as a suspect was also quite fun. Phyllis Diller is also a lot of fun, and each line is punctuated by her trademark cackle and self-deprecating brand of humour.

The haunted castle doesn’t necessarily suit her real life personality, but meh, I didn’t mind it. The séance scene at the Magic Mansion was also super spooky with the atmospheric room and ridiculous amounts of people listening in.

There is a case of ‘too many characters’ in this episode, and I forgot all about Alberto when he was revealed to be the bad guy and I had to rewind to remember who he even was. Overall though, his spooky skull costume in the trench coat and fedora was cool and creepy.

Join me next week when we will be covering Sandy Duncan’s Jekyll and Hyde.

The Ghost of the Red Baron

The Ghost of Bigfoot