Sandy Duncan’s Jekyll and Hyde is the 7th episode of the New Scooby-Doo Movies and originally aired on October 21, 1972.

This episode sees the gang on the set of a movie where the movie studio is about to be torn down after they finish wrapping up a film starring Sandy Duncan.

I didn’t know much about Sandy going into this episode other than she was on a sitcom I used to enjoy called the ‘Hogan Family’ in the mid 80s. I remember way back then that my mother told me Sandy was famous for playing Peter Pan on stage. I also recalled Sandy staring on an episode of the Muppets and enjoying that episode.

Sandy would also return to the series this year on Season 2 of Scooby-Doo and Guess Who. I have not watched the episode as it hasn’t been released on DVD yet, however, I’m excited to see what they do with this episode 49 years later.

Anyway, enough of my Jibber Jabber, on with the review.

The episode begins with the gang at Mammoth Studios, where a studio is about to be torn down so a super-duper market can be put in its place.

Shaggy is excited they are re-making Dr. Jekyll and Mr. Hyde as the first two movies they made were too scary.

The gang need help to get the Mystery Machine back on the road so they wander about the movie set. Hearing some cries for help, they go investigate and see Sandy Duncan running down the lot. 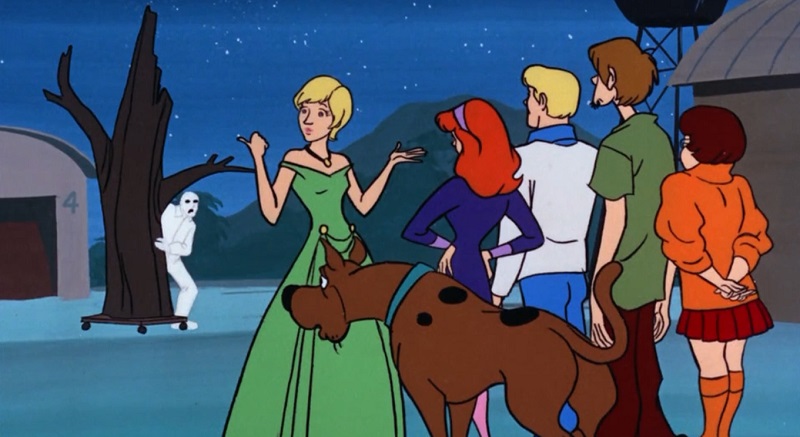 Sandy explains that a ghost lunged at her and frightened her. We also meet Shirly Denison, who is Sandy’s stunt double and she’s also a dead ringer for Daphne. We also meet Mr. Thayer the head of the studio and the director Mr. Van Henstone, the male lead Duke Jason and his stuntman Slats. Sandy then dons a red wig, and we get a trio of Daphnes.

Sandy explains there have been a lot of accidents and fires causing trouble among the set which is so weird as it’s set to be torn down in a week. Everybody is getting suspicious of each other. Shirley being a gossip girl explains all the suspects. The studio head Thayer wants the publicity, Henstone wants to save money, and Slatts hates Duke Jason.

Freddy thinks something suspicious is going on and Velma thinks he’s right as the ghost tried to stop them from getting on set.

Another freak accident occurs where a lamp nearly kills Sandy. Scooby sees that the ghost was behind the trouble, but nobody else saw a thing. Shirley is upset about the danger and walks off the set, so Daphne is voluntold to be a stand in. The night has gone on too late so they plan on re-shooting in the morning. In the meantime, the gang split up to look for clues.

The first clue they find is that the Mystery Machine is unstuck, and is parked facing the out direction. Shaggy takes as the sign to hightail it out of there, but Freddy is insistent on staying.

As Scooby explains how he saw the ghost, the ghost pulls a lever and sends Shaggy and Scooby into a secret tunnel. Scooby and Shaggy head down the tunnel and come out in a desert set where they are chased by a man in a Sheik costume. Running around various sets, Scooby and Shaggy encounter a mummy, a mechanical lion and other oddities.

Freddy and Daphne have some hijinks on a pirate ship where a Pirate tries to capture them. Then they run through a rural Chinese village set where they encounter a fire breathing dragon.

Velma is off on her own in a Philadelphia set where the pirate has made his way over to snatch her. After being chased, she comes across Freddy and Daphne on the pirate set, where they get on a boat and land on an Alaska winter landscape movie set.

Here they re-group with Scooby and Shaggy, and they are chased by a bear. After running away on sled, they are back in the wild west.

After spending the night, the gang head back to the main movie set and explain how they were chased by so many weird characters.

Filming starts up again and Freddy stakes out the set to ensure nothing is going afoul.

Sandy is shooting the main scene where Mr. Hyde (played by Duke Jason and Slatts) makes his appearance. And we shift to Daphne having a struggle with a third actor dressed as Mr. Hyde.

Daphne is kidnapped and a Ransom note is found where it says they need to stop filming if they ever want to find Sandy Duncan again.

Thayer calls the police and the rest of the gang, along with Sandy, go off to search for Daphne. Scooby finds a secret passage that brings to an underground staging area and storeroom. Scooby and Sandy also get separated from the gang, which makes Scooby quite happy as he has a mad crush on Sandy.

Sandy discovers the newspapers where the ransom notes were cut from.

More shenanigans occur until we find Daphne on a castle/ski mountain set.

Our final chase scene brings us to a Mausoleum and Sandy Duncan comes up with the final trap. The gang capture Mr. Hyde and it’s revealed to be Zalia Z. Fairchild, a silent film actor who disappeared decades ago and has been living on the movie set

With another mystery solved, Scooby plans to go off with Sandy until he finds out she’ll be filming a movie in Africa with lions, tigers, alligators, rhinos and boa constrictors. Scooby figures he’d rather deal with ghosts along with the gang instead of all these dangerous animals.

This episode isn’t bad, and it shows a side of the gang I enjoy, where they just act as kids. However, this episode isn’t very spooky at all. Most of the bad guys the gang encounter are very ‘stock’ and ordinary looking.

Mr. Hyde looks cool, but we don’t get much of him until the very end and the opening ghost is a little disturbing also. Overall, however, this episode also had more in common with The Phantom of the Opera than Jekyll and Hyde.

Sandy Duncan also wasn’t in this episode all that much, and the majority is just the gang off on their own until the final act where Daphne is kidnapped. I think this made for a better episode as her appearance didn’t get in the way of the fun. With what few scenes Sandy had, those were enjoyable and she came off as incredibly enjoyable

I did enjoy this episode, but I don’t think I’ll ever re-watch it as it focuses more on the gags and humour than the chills and thrills. If funny Scooby-Doo is your thing, you’ll probably enjoy this one much more than me.

Until next week where we will be covering the Secret of Shark Island, Stay Spooky.