Wednesday is Missing is episode 3 of the New Scooby Doo Movies and originally aired on September 23, 1972. While this episode was released on VHS, copyright issues prevented it from showing up on DVD and Blu-ray. Thus, to watch it, you’ll need to own it on VHS, or stream it on Boomerang.

For the most part, the Addams family is voiced by their live action actors from the 60s, so we get some familiar voices from the franchise with Carolyn Jones voicing Morticia Addams, John Astin voicing Gomez, Jackie Coogen voicing Uncle Fester, and Ted Cassidy voicing Lurch. The following year, we’d get a cartoon, with only Coogen and Cassidy returning and classic Hanna Barbera voice actors Janet Waldo and Lennie Weinrib handling the Morticia and Gomez voices respectively.

Gomez Addams is voiced by John Astin, who is most famous for his role in the 1960s live television show, as well as playing the Riddler on the campy 60s Batman tv series. I know John Austin the best from the 80s tv show Night Court. John Austin is also Sean Austin’s father, who went on to star in the Goonies, Stranger Things and Lord of the Rings.

A young Jodie Foster shows up to voice Pugsley Addams, and Jodie of course would see lots of success later on with such films as Taxi Driver, Silence of the Lambs, and my favourite – Contact.

Should this episode stay missing, or is it worth being found?  Let’s find out!

The episode begins with a cool shot of the Addams family mansion. The Mystery Machine drives by in the fog, and are lost due to lack of visibility. Ahead, they see a giant pair of eyes that causes Freddy to drive off the side of the road and they get stuck in a swamp.

The giant eyes turn out to be a car, and the drivers stop to tell them that they are driving to get away from the haunted mansion that they were hired to be housekeepers for. The housekeepers then drive off without offering to help Freddy and the gang out.

Freddy tries to start the Mystery Machine up again, but the battery is dead. Fortunately, Lurch (the extremely tall Addams family butler) shows up and leads them to the mansion.

Inside the gang meet the Addams Family and we are introduced to Gomez, Mortica, Wednesday, Pugsley, Uncle Fester, Cousin It, Grand Ma-Ma, Cleopatra, and Thing. The gang recognize the family from watching their show on television. 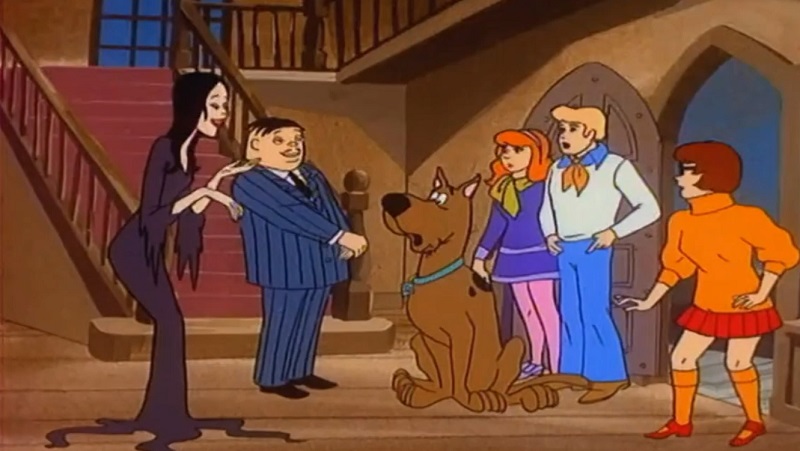 Gomez and Mortica want to go on vacation in the Okefenokee Swamp, so the gang stay behind to babysit.

The gang’s babysitting skills are rather weak as Wednesday is kidnapped by a giant bird during dinner. A note is left behind that says ‘Addams Family, this is a warning, clear out now – the Vulture’ 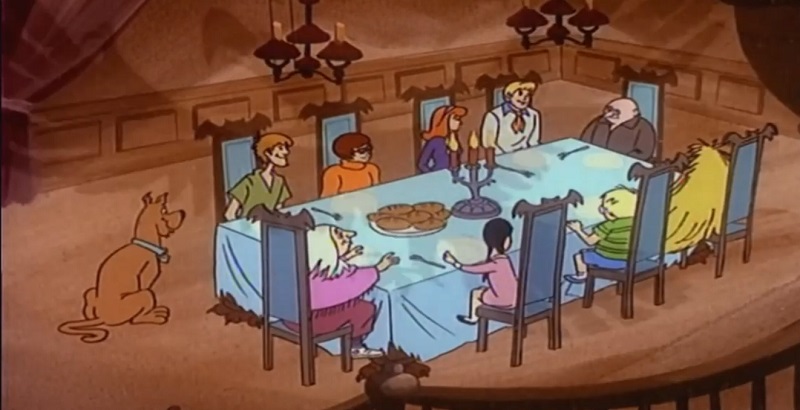 The gang split up to search for Wednesday, while the remainder of the Addams family go off and do whatever they do.

Inside the house, the gang encounter lots of creepy hijinks and we get plenty of gags like a haunted organ, a levitating suit of armor, a fire breathing dragon, plenty of secret passages and flying carpet.

After 20 minutes or so of wandering around, the gang find a caged elevator that brings them to the mansion attic terrace where they find Wednesday who is happy as can be.

The gang have a 7 minute tussle with the vulture and more haunted Addams family mansion shenanigans occur. Eventually, the vulture is hit by some fireworks where it crashes and turns out to be a helicopter with the Housekeepers they met earlier on the road.

Lurch then lifts the Mystery Machine out of the swamp, and the gang head off on their next adventure.

I give this episode a 6.5 out of 10. I was originally thinking a 6, but this episode has grown on me over the months.

Again, the main issues here are padding, and filler. It’s not until a quarter of the way in that Wednesday goes missing and then we get half an hour of the gang just walking through the house.

There isn’t any notable villain in this. Sure the Giant Vulture helicopter is alright I guess, for kids. But as soon as I upload this video, I’ll probably forget all about the giant vulture.

The real star of the show here is the Mansion, however, most of the gags we got here we’ve already seen. Magic carpets, haunted organs, walking suits of armour and secret passages are things we’ve already seen a dozen times in the franchise.

Had this been a half hour, I think this would have been a strong 8, but if I were a kid in the 70s watching this, I think I would have enjoyed it a lot.

In my next review I will be covering episode 4 the Frickert Fracas, which stars Johnathan Winters. Until then, Stay Spooky!

The Haunted Horseman of Hagglethorn Hall