The Caped Crusader Caper is the 15th episode of the New Scooby Doo Movies and originally aired on December 16, 1972. In this episode we see the gang out camping near Gotham City where they run into Batman & Robin, along with the Joker and Penguin who are on the loose after kidnapping a Professor.

We also get a cool appearance by Yogi Bear and Fred Flintstone in this episode which makes for a bit of fun.

I don’t have any other trivia for this one so let’s get on with the review.

The episode begins with the gang sitting around a campfire, and Shaggy is naturally hungry. Daphne volunteers to cook something up, but requests that Scooby and Shaggy fetch more firewood.

In their trek into the woods they are scared by a deer, and then terrified by an evil laugh. Shaggy and Scooby see the Joker and the Penguin leading a scientist away so they run back to camp, but get trapped in a wooden cage. The Joker and Penguin spot the gang’s campfire and plan on scaring the gang away.

The batcopter comes down and Batman and Robin come down. Back at camp, Batman explains that the professor is named Professor Flakey and he was kidnapped earlier this morning. Batman was scanning the woods and accidentally caught Scooby and Shaggy.

Batman requests the gang flash the lights of the Mystery Machine if they run into any trouble and then takes off in his copter. 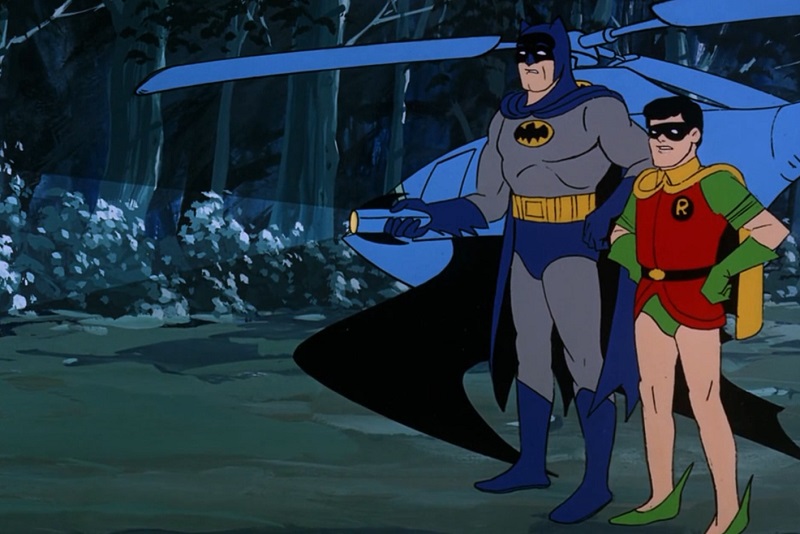 Shaggy tells the gang he saw a cave, so the gang take off in the Mystery Machine and head towards it. Unfortunately the road is blocked by a fallen log. Up in a tree they see a Dryad, a spirit that lives in a tree which squawks at them.

Freddy rolls the log off the road and into the water. Unfortunately Scooby had been hiding it in, and is now in the lake. Freddy and the girls trail the Dryad in the Mystery Machine while Shaggy goes to rescue Scooby.

The Dryad pops up and gives Scooby and Shaggy a good scare, and they run deeper into the woods. 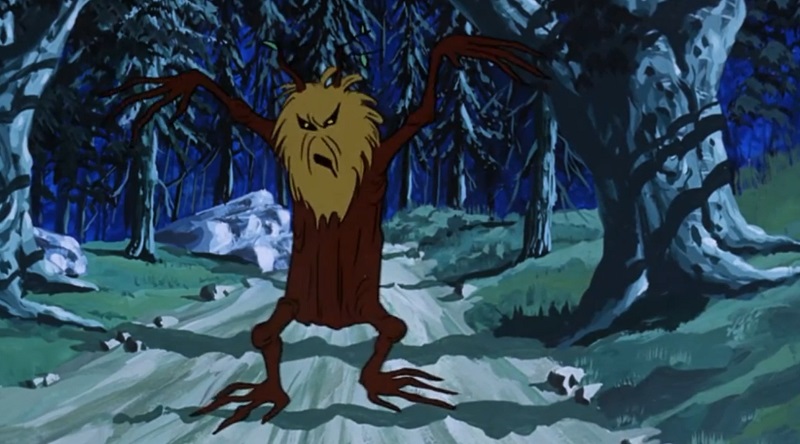 Freddy and the girls find the cave and drive towards it, but are turned around by a bridge troll who revolves a covered bridge 180degrees as they are on it, so they end up back at the campsite..

Batman lands and suspects that there’s something fishy going on so he gets back in his copter and follows the gang as they head back to the cave.

Underneath the bridge we see the troll and the Dryad, We learn that the Joker is the Dryad and the Penguin is the Troll. 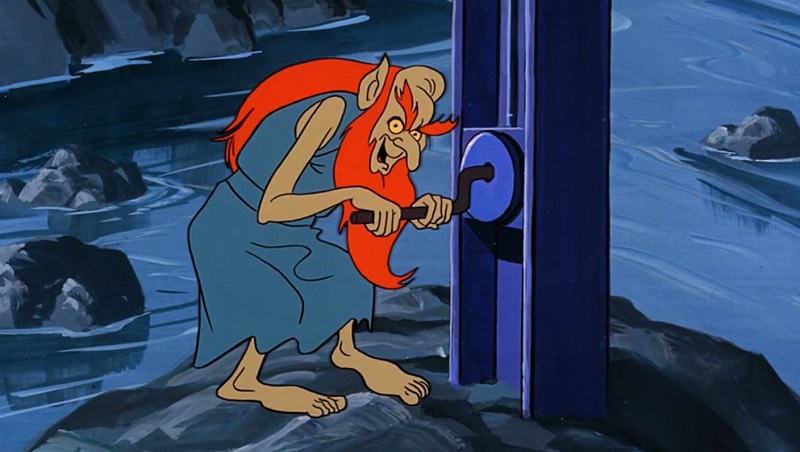 The Mystery Machine shows up and Shaggy and Scooby hop in and head towards the cave.

At the cave, we find a little hole in the cliff, so the gang head in. Freddy is unimpressed with the size of the cave and decides to leave. Before he can get too far Shaggy trips on a rock and falls into a secret entrance.

The new passageway goes further underground and leads to an underground lake with a boat. Freddy and the girls spot another passage and head off to investigate while Scooby and Shaggy stay at the underground lake in case they need a quick exit.

We jump to the Joker and Penguin who are interrogating the professor who explains he has a flying suit. The Joker wants this suit so he can fly away after robberies. Professor Flaky explains the flying suit is at Hillside Aircraft in Gotham City. 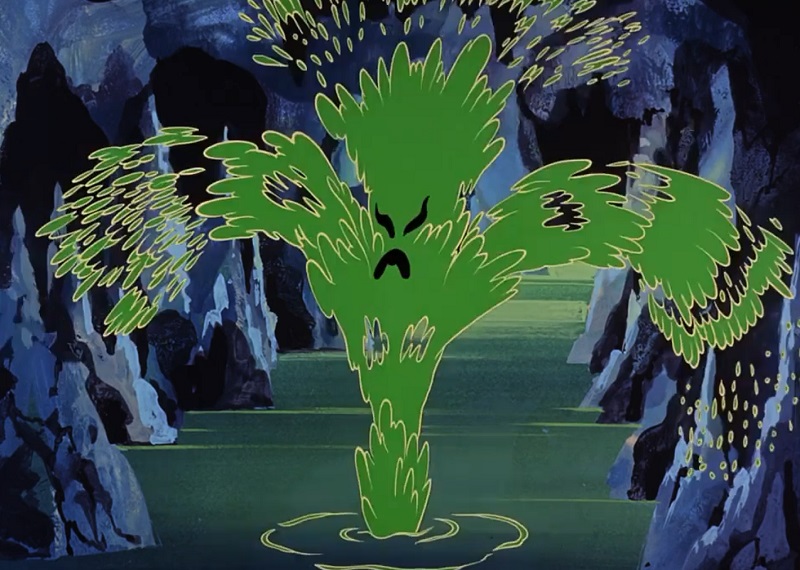 In their attempts to leave the cave, Shaggy and Scooby also run into Professor Flaky. Meanwhile the rest of the gang run into Batman and Robin.

Everyone reunites and they head back to the top so they can intercept the Joker. The Professor explains that they are headed to Hillside Aircraft, but fortunately the Professor lied and the flying suit is at the Gotham Rubber Factory.

The Joker and Penguin have swiped the Batcopter so the Gang first have to drive Batman and the Robin to the Batcave so they can fetch their batmobile.

The gang head off to the Gotham rubber factory and Batman and Robin take off towards Hillside Aircraft.

At the Rubber Factory we get some cool Yogi Bear, Fred Flintstone and Batman & Robin parade balloons. The professor shows the gang how the rubber suit works in his lab as they wait for the Joker and Penguin to show up.

They soon hear a helicopter and see the Joker and Penguin land in the yard. Freddy makes full use of the rubber props and does his best to trap the two villains.

Batman and Robin soon show up and take back their copter and fly it up to the roof to the Professor’s lab. The Professor panics thinking it’s the Joker and Penguin and tosses the suit out the window where it lands on Scooby. 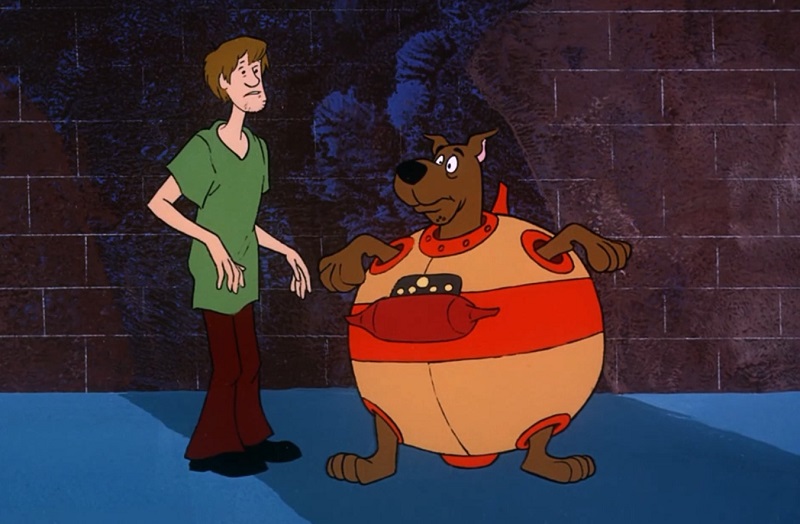 Scooby has his own adventure in the flying suit while the Joker and Penguin try to capture him. We get about 5 minutes of chase hijinks until the bad guys are finally caught.

I give this episode a 5.5 out of 10. This episode is okay and watchable, it just didn’t resonate with me all that much. I found the repeat villains of the Joker and Penguin a little too much and wish they went with someone else like the Riddler or Poison Ivy.

I did enjoy the opening with the gang camping, and I didn’t mind the cave scenes, or the rubber factory, however, I was also a bit bored with this one as there is absolutely no mystery. 5 minutes in we know the Joker and the Penguin are the Dryad and the Cave Troll. So this steals away so much of the fun!

Batman and Robin also seem somewhat stuffed into this episode. You could have taken them out completely and nothing would change all that much. Most of their scenes padded the episode run time, as they had very little interaction with the gang.

Professor Flakey annoyed me as well, and anytime he was on screen it was just pure silliness.

I doubt I’ll want to watch this episode anytime soon, and I think I prefer the episodes with real life guest stars as they bring a lot more personality to the series.

Anyway, until next week, Stay Spooky!