Guess Who’s Knott Coming to Dinner is the 5th episode of Season One of the New Scooby-Doo Movies. Originally airing on October 7, 1972, this episode guest stars Don Knotts.

Don Knotts also appears in a second Scooby-Doo episode called The Spooky Fog of Juneberry, as well as the 2002 video game Scooby-Doo! Night of 100 Frights.

If you’d like to own this episode, you can buy it no Blu-ray with the entire 23 episode New Scooby-Doo Movies set (all but an Addams Family episode due to copyright issues). Or you can buy it on DVD, with half the episodes.

This episode begins like so many episodes have before with the gang lost on a spooky road during a thunderstorm. The gang are trying to reach Pinecrest Lodge, but come across an old wrought iron gate with the words ‘Moody Manor’ scrawled across it. 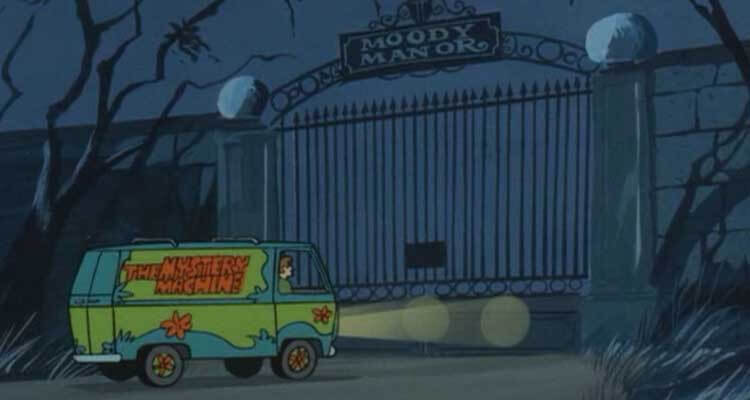 Figuring they could ask for directions at the Manor, Velma gets out of the Mystery Machine to push open the gate. Instead, she ends up pushing the entire gate over. Halfway up the drive, the Mystery Machine is stopped by a fallen tree, so the gang hike the remainder of the way up to the Manor.

As they stroll up to the Manor, Don Knotts, disguised as a Lumber Jack follows them. Frequently Don Knotts sneezes due to a Goldenrod allergy, causing his beard and moustache to come off. 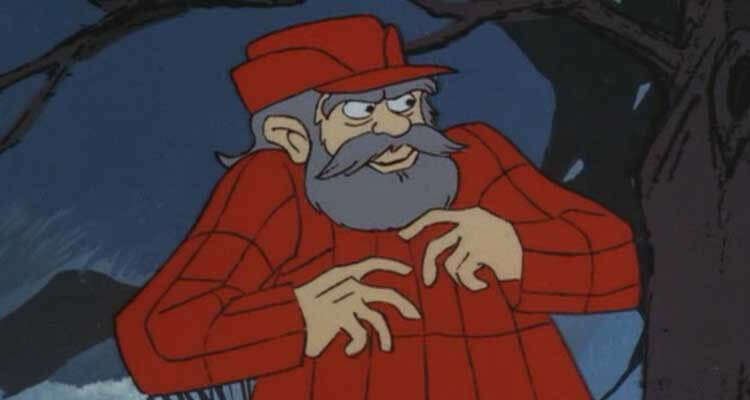 The gang continue looking for a way to escape the Manor, and Scooby finds a secret passage. A series of trap doors and sliding staircases brings them right back to the lobby where they are greeted by Phineas. 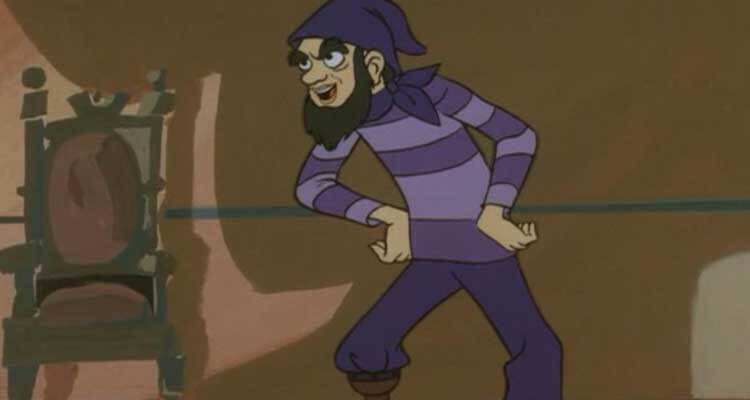 Phineas is Don Knotts in disguise as a one-legged pirate. Phineas mistakes them for Captain Moody’s nieces and nephews and invites them to stay for dinner. There the gang politely pretend to eat as they are worried that they will be poisoned. Phineas then leaves the room to fetch the maid. 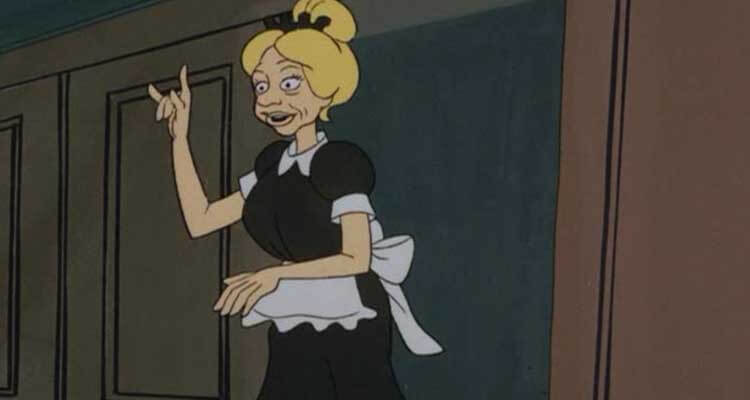 Don Knotts disguised as a maid returns and shows the gang to their rooms. At this point, Velma and Daphne begin to suspect that all of the people they have met are related as they look so familiar.

Freddy stays in his room and reads to keep his mind off things, while Scooby and Shaggy head down to the kitchen to make some food. (Daphne and Velma had the same idea but chickened out halfway down the hallway). In the kitchen, Shaggy and Scooby make themselves some epic sandwiches.

Before they can finish their sandwiches, the Ghost of Captain Moody appears and scares Shaggy and Scooby back to their room. 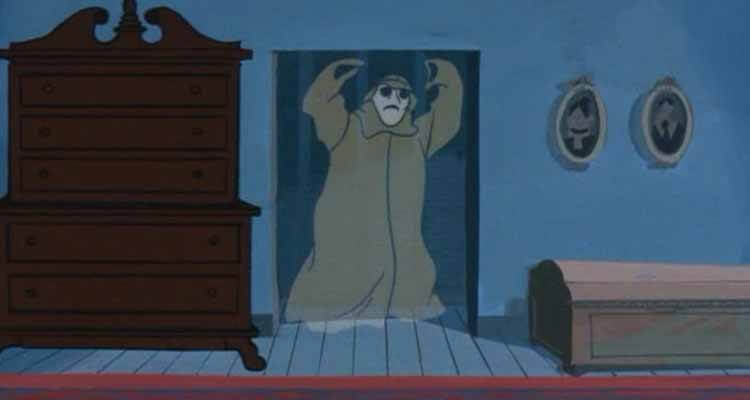 Midway through the chase, the ghost’s hat and wig are knocked off, and the gang start to get suspicious. Since the ghost looks like Phineas, and Phineas looks like Featherstone the Butler, and the Butler looks like the maid, the gang think they are all tied together.

Confronting the Butler, they realize that it’s Don Knotts, who claims that he is Homer Pipsqueak, world famous private eye. The detective explains that he got a call from Captain Moody that morning that was quite distressing. After rushing to the Manor, Mr. Pipsqueak couldn’t find Captain Moody, so he gets the gang to help him out. 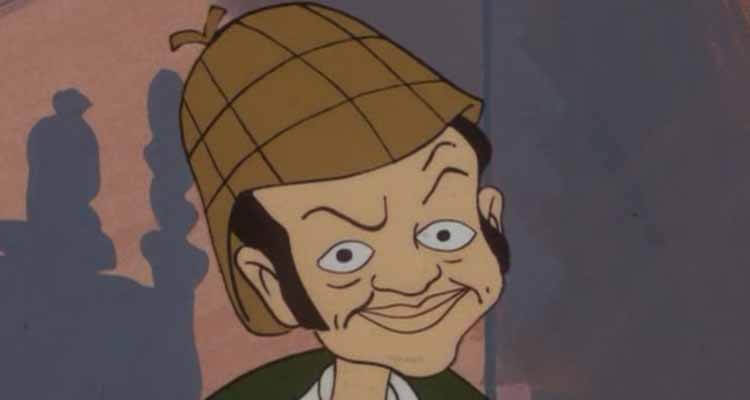 Donning a Sherlock Holmes-like outfit, Homer Pipsqueak explains that he suspects that Mr. Moody’s nieces and nephews kidnapped Captain Moody as he is worth millions and each niece and nephew would inherit a quarter of the fortune each.  Initially he thought the gang were the nieces and nephews, but after testing them with his many disguises, he realizes that they are who they say they are.

Looking for Captain Moody Shaggy runs into the real ghost at a mine which is also on the property.

Thinking it’s Homer Pipsqueak in disguise, Shaggy leads the ghost back to Scooby and Mr. Pipsqueak where they realize that this is an actual ghost. To make matters worse, there’s two of them!

This altercation leads the gang to the mill where they find Captain Moody in a minecart. A well-crafted plan devised by Mr. Pipsqueak traps the real ghost, which turns out to be Captain Moody’s nephews. 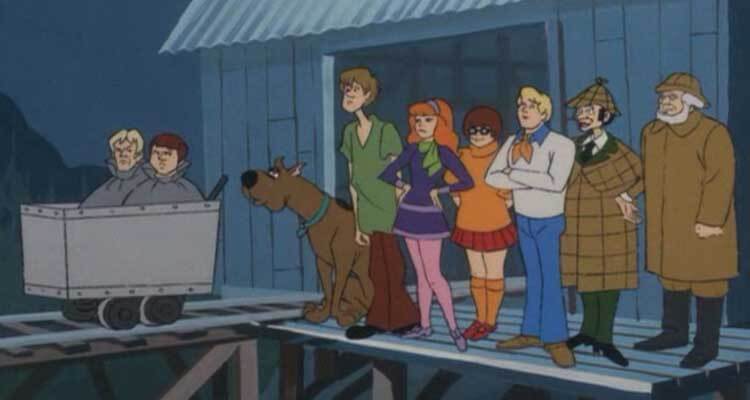 There’s a lot to love in this episode. Don Knotts costume changes, a spooky manor full of trap doors and secret stairwells, and a dark plot. I was surprised to hear Daphne crack a joke that the basement was full of dead bodies, and they don’t shy away from the fact that the Nephews intended to kill Captain Moody. There’s also some legit humour that still holds up after 47+ years.  I would have loved this episode a lot more back in the ’70s with its long-running time, but as an adult, I prefer the quicker 20-minute episodes.