The Dynamic Scooby-Doo Affair is the 2nd episode of the New Scooby Doo Movies and originally aired on Sept 16th 1972.

This episode sees the gang hooking up with Batman and Robin as they encounter a counterfeit scheme involving a disappearing house. We also get a surprise visit by two classic batman villains.

Batman, Robin and the villains who pop up are all voiced by their Superfriends voice actors, which is rather cool as all the guest stars in this episode feel like who they should be and have depth to them. It’s also fun to watch the gang play off of our guest stars.

For example, at one point in the episode Batman says his famous line ‘Robin, to the Batmobile’, and Freddy follows up with ‘gang, to the Mystery Machine’.

Another fun touch is that In between scenes where we get fade-outs and fade-ins we also get the Bat Insignia, and that is super cool as well! It’s a clever touch that makes this episode even better.

Finally, this marks the first episode where ‘jinkies’ is used, but it’s not Velma who says it, it’s Shaggy.

Anyway, Despite some cool guest stars, does this make for a cool Scooby-Doo episode? Let’s find out!

The episode begins with the gang headed to the Mystery Club Convention in the Mystery Machine. Unfortunately, while in Gotham, they hit a bump in the road that causes their headlights to become disconnected from the vehicle’s battery.

Overhead they see a large airplane that swoops down and lands near them. Inside, they see the plane crew unload some gear. Since the plane landed at night with no lights on, they find it suspicious so they follow the crew to an old house. 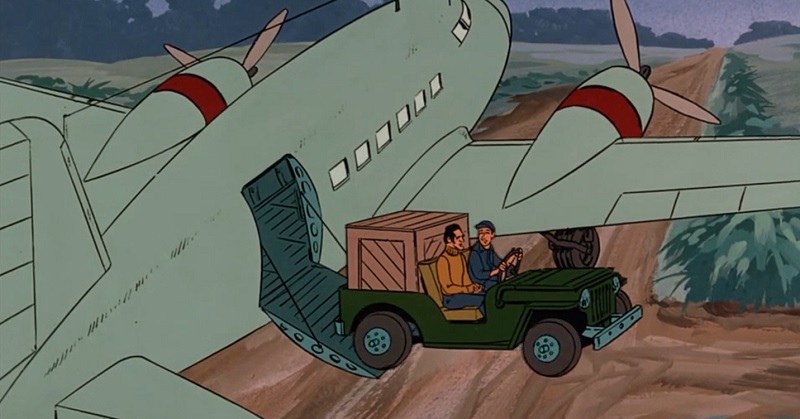 The crew flew off after delivering the crate so the gang walk into the house where they see the crate strapped to the floor. Outside they hear a car pull up so the gang hide until they see Batman and Robin show up.

Batman and Robin were suspicious about the airplane as well and decided to investigate. They hear a noise upstairs and an elderly lady walks down. The lady introduces herself as Mrs. Baker.

Mrs. Baker is alarmed and Batman opens it and finds a punch clown. Everyone laughs and Scooby gives it a punch where they discover counterfeit money inside. Batman realizes it’s counterfeit as President Lincoln is wearing a turtleneck sweater.

The gang, along with Batman and Robin go outside to look for clues and Mrs. Baker notices some tracks that are headed off towards the auto junk yard. She also warns them that there is a cemetery next door to the junkyard.

At the junkyard they find fresh footprints and everyone splits up to look for more clues. Freddy and the girls watch Robin climb up a crane and Shaggy and Scooby run into a hooded man with green eyes.

In the Batcave Shaggy and Scooby enjoy some bat cookies and some Batmilk. Batman and Robin watch the Batmobile being dropped off at the Gotham Amusement Park, and they all head off to pick it back up.

At the amusement park they discover Scooby and Shaggy see the Joker and the Penguin in a haunted house attraction. Now everyone realizes who’s behind these shenanigans. Batman and Robin head into the haunted house to apprehend these dangerous criminals.

Inside the haunted house, the Joker tries his best to scare off Batman and Robin, and then lures them into the room of doom where Batman and Robin get trapped as they fall down an elevator shaft. 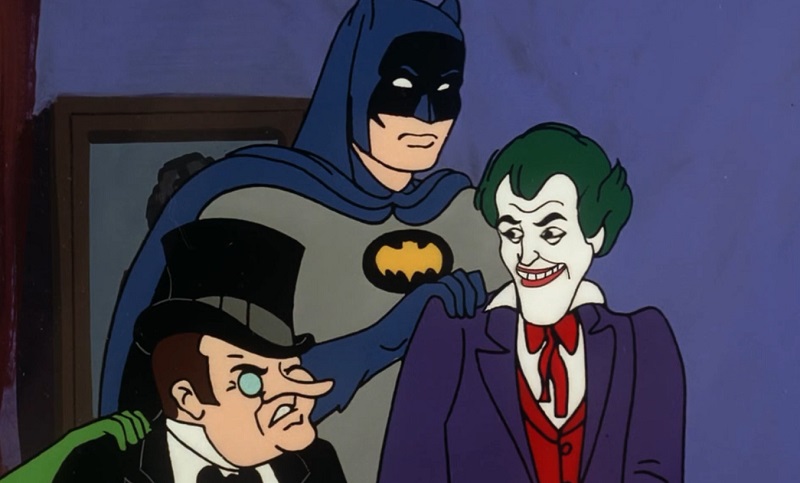 Batman passes the Joker and Penguin off to the Gotham city detectives and everyone else goes off to find Mrs. Baker. Freddy found it funny that all of Mrs. Baker’s furniture was nailed to the floor, so they head back to the spot where the house was to see if they can make it reappear.

The house is back and the bedroom window light is on so they split up and enter the house from every entrance. Scooby and Shaggy head outside and trigger a trap that sends the house back underground.

We get some cool shots of the gang and batman walking about the house that is now upside down until Shaggy makes the house reappear. Everyone reunites and with further investigation, they find an underground cave that leads to a warehouse full of toys. The stubby hooded person stalks them through the warehouse and uses multiple toys to confuse the gang and batman.

Eventually the capture the black hooded figure with green eyes and it turns out to be Mrs. Baker. She was behind the counterfeit scheme the entire time. As a reward Batman gives Scooby some more bat cookies.

While still mostly focused on comedy, we got some really cool environments such as the junkyard, the toy warehouse, the haunted amusement park and the rotating and disappearing house.

I thought it was clever as well that the Joker and Penguin weren’t behind the mystery and were just patsies in the whole scheme of thing. Mrs. Baker was super-suspicious from the get go, but hey, it’s a cartoon, so why not.

The Batman in this episode is super camp and a little bit hokey which I wasn’t expecting at first as I have been re-watching the 90s Animated Batman cartoons lately. Still, I warmed up to his cheesy observational skills, and this also served as a reminder that I need to re-watch the Superfriends as I enjoy this portrayal of Batman.

Robin is voiced by Casey Kasem, and this can get a bit confusing in a funny way as his voice is somewhat similar to Shaggy’s.

The Joker sounded a bit off too, as I’m used to Mark Hamill voicing him, and in this episode he sounded more like Mr. Howell from Gilligan’s Island or a bowery boys style voice. I really loved this take on the Joker however.

Ted Knight returns to voice the Penguin. Ted Knight is one of my favourite actors and he was the cranky judge in the movie Caddy Shack.

Those aren’t complaints and I enjoyed how the Dynamic Duo differed to how they are portrayed in modern times.

Join me next week when I will be reviewing ‘Wednesday is Missing’. The title is fitting as this episode is actually missing from the Blu-ray set due to a copyright dispute.