The Ghost of the Red Baron is episode 11 of the first season of the New Scooby-Doo Movies and originally aired on November 18, 1972.

This episode sees the gang on a farm where the crops are dying as planes can not fertilize their crops properly due to the Ghost of the Red Baron haunting the sky.

The Red Baron is based on a real German pilot from World War 1 who won 80 air combats during that era due to his fighter pilot skills. He has a fascinating history and if you are interested in learning more about him, I suggest you hop on Google and get at it. I certainly can’t do him justice.

My favourite take on the Red Baron is the Red Beagle in Peanuts comics where Snoopy parodies him. Snoopy is even mentioned in this episode.

Despite being a fan of the 3 Stooges, I wasn’t looking forward to reviewing this one. I didn’t like the first 3 Stooges episode all that much. I just find the cartoon version of the 3 stooges is a pale reflection of the real thing.

Was I pleasantly surprised with my low expectations going in, or was I bored out of my skull with this episode? Let’s find out.

The Ghost of the Red Baron – Episode Review

The episode begins with the Mystery Machine driving past a farm for sale as Shaggy takes them down a shortcut down a farm road so he can admire the rows of delicious corn. Velma takes note that some farms have ruined and brown crops of corn, while other farms have healthy corn.

In the sky they see a crop duster spraying fertilizer on the crops. The same plane driven by the Red Baron flies past the crop duster and forces it out of the sky. The Baron’s plane also forces the Mystery Machine into a corn field, where they smash up 2 acres of corn until they finally emerge with a flat tire.

Talking to the farmer and the pilot, the farmer is angry his crop of corn was smashed up, but is even angrier when the pilot quits. The pilot’s supervisor(Mr. Sawyer) says this is the 50th pilot to quit as everyone is terrified of the Red Baron. Fortunately the three Stooges show up and Curly volunteers to fly the plane.

Curly gives the crop duster a test drive, but Scooby takes control of the plane and performs some amazing in-air stunts that impress the supervisor (Mr. Sawyer) offers to pay double. 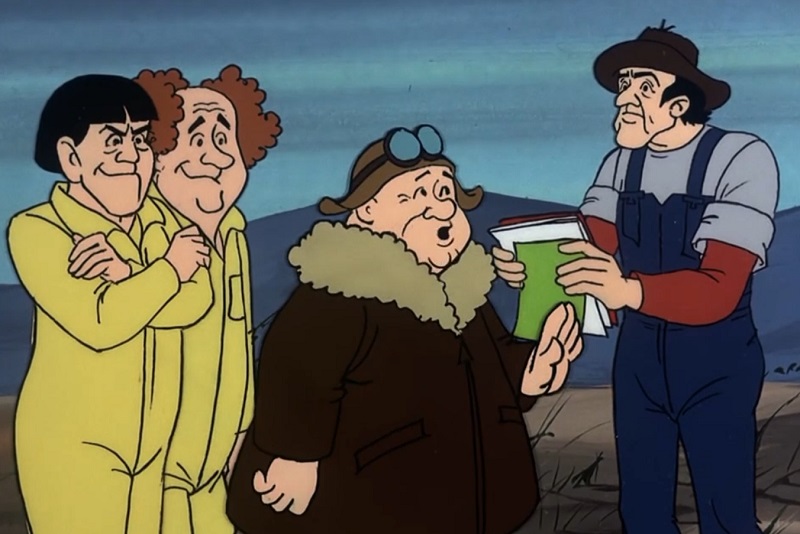 At the airport, Freddy is changing his tire. Shaggy wants to get out of there fast, but Freddy wants to see if the Red Baron comes back.

The gang also meet Andrew Terra, the plane hanger mechanic who warns them that this place isn’t safe. The Ghost of the Red Baron has been haunting the area, and won’t let any airplanes fly.

Andrew then excuses himself quickly after hearing the gang gloat about Curly’s terrific air plane skills. Shortly after, someone turns on an airplane that chases the gang about the empty hanger.

The gang then meet Mr. Siegfried, the Airport manager, who tells them to leave, but Velma and Freddy are insistent to say.

It’s now night time and the Ghost of the Red Baron is flying high in the sky giving everyone a fright once more with his dangerous flying. The Red Baron drops a note that says ‘the Red Baron Strikes again – Leave at once or face the Inevitable’

The gang and the stooges follow the Red Baron where he landed, but the airplane is gone. The two pairs of groups decide to padlock themselves in the airport hanger where they will be safe. Their plan is foiled, as the Red Baron has a pair of bolt cutters and cuts the chain leading into the Hanger. There he haunts the Stooges and the gang once more.
Freddy sees that the chain is cut, so he realizes they aren’t dealing with a ghost. Despite his suspicions, we see the Ghost float after Scooby and Shaggy and give them a chase, until they are able to hide in the Mystery Machine. The Baron then crashes through a window and HOPS off into a corn field. 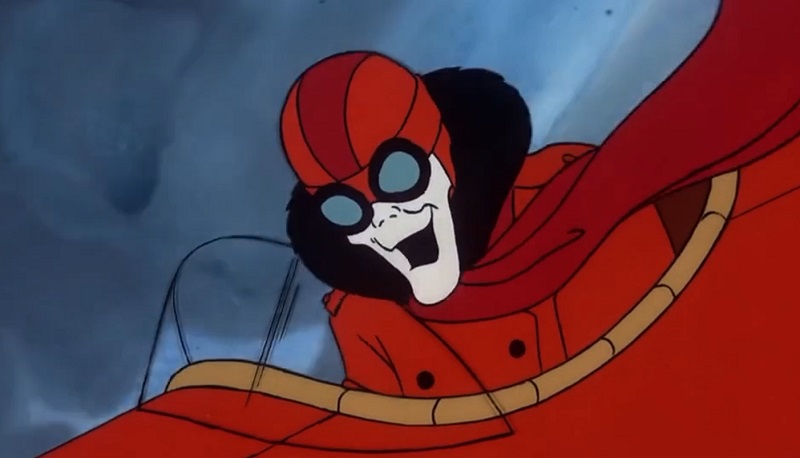 Velma sees a droopy plant and the Mr. Sawyer says he’s been putting fertilizer on it every day, but the plane keeps dying. Velma has her suspicions and goes to investigate the fertilizer, but is chased off by a hopping and Floating Red Baron.

A long chase takes place with Velma in the sky in an airplane with no clue on how to fly it. The Red Baron’s plane also takes to the sky and chases Scooby and Shaggy around in a corn field. The Red Baron is on top of a control antenna controlling his plane remotely.

The 3 stooges also hop in an airplane, and we get about 10 more minutes of chase hijinx with Freddy manning the control panel to assist everyone out in getting landed safely.

Eventually everyone lands, and Velma finds boxes of empty weed killer. She suspects the fertilizer was replaced with this weed killer.

Shaggy also finds a farmhouse used as a garage and Velma suspects its the Red Baron’s. The lock on it is ultrasonic, so now they know that whoever lives there really doesn’t want to be investigated, so… they investigate. 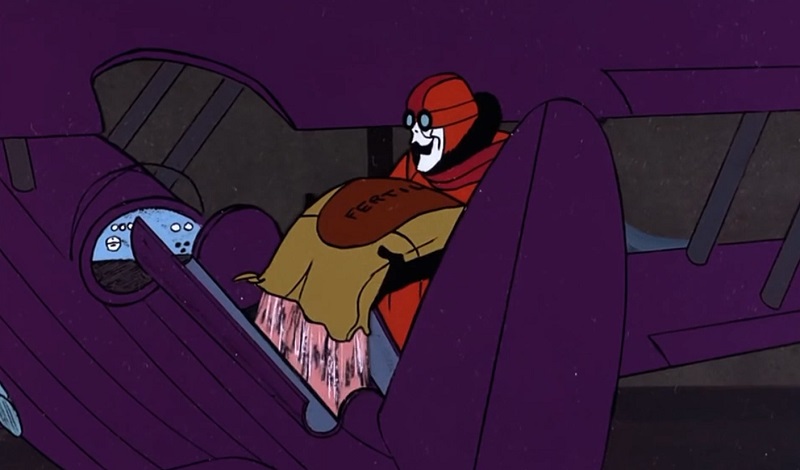 Shaggy and Scooby eventually come across them, along with the Stooges and release them.

We get our last final chase scene in the sky where the Freddy and the girls along with the Stooges chase him in the sky, Meanwhile, Shaggy uses the remote control planes they discovered earlier to chase the Red Baron.

The Red Baron eventually lands and hops in his jeep, but Curly lands his plane on him and traps him.

Ripping the mask off it turns out to be Siegfried, the hanger manager. Siegfried wanted to ruin all the crops so he could buy up the farms and buy them dirt cheap. Then he could sell the lots back to the county as they were interested in the land so they could turn it into a jet field.

Finally, we learn that the Red Baron could hop and float due to cables in the sky, plus spring loaded coils in his boots.

With another mystery solved, the gang head out on their next adventure.

I give this episode a 5 out of 10. This episode was okay, but I never want to watch it again. It’s just far too long and padded with nonsense.

The episode started off pretty cool. The Ghost of the Red Baron actually looked cool and was fun, however, 75% of this episode is just one big chase scene in the sky.

The look of the Ghost of the Red Baron is spot on, but they don’t give him much personality or any spookiness. The fact that he hops just makes him look stupid.

We’re also introduced to a few suspects, but the episode barely spends any time on the plot for us to really care or even remember who’s who. The Stooges are also kept to a minimum, and aside from Curly flying the plane, they didn’t have much to do.

I think I did like this better than the first 3 stooges episode in some ways. In other ways, that episode is much more memorable due to how absurd and crazy it was. This episode is just flat out boring.

I’m sure someone out there loves this episode and is hurt that I feel this episode sucks, but hey, that’s what makes life interesting. If we all had the same opinion, the world would be a boring place.

That wraps up another episode, until next week when we will be covering the Ghostly Creep from the Deep, Stay Spooky!