The Ghostly Creep from the Deep is the 10th episode of the first season of the New Scooby-Doo Movies and originally aired on November 25, 1972

In this episode the gang become lost and then stuck in a swamp where they soon meet up with the Harlem Globetrotters who are also stuck.

From there, they encounter a swamp hermit who is trying to scare them away, along with Red Beard the Ghost and his spooky pirate ship.

The Harlem Globetrotters were a popular touring group of basketball players who toured around the world putting on shows with incredible trick shots during their games. They’d also have plenty of comedic antics during their shows, making them popular with young kids. 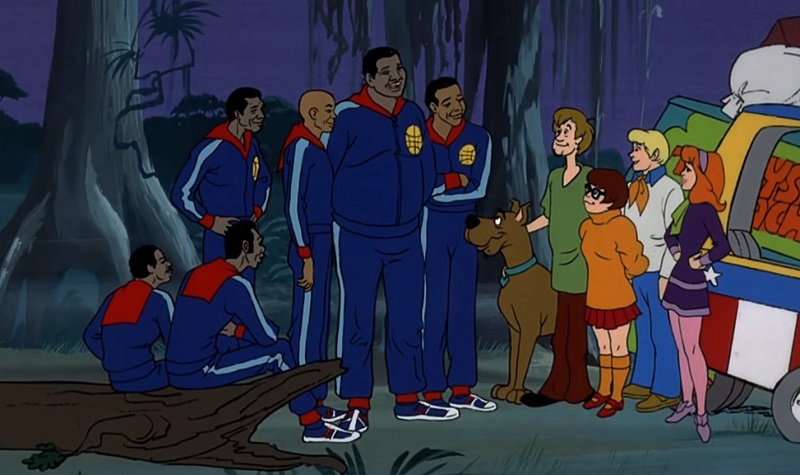 Prior to their guest spot on Scooby Doo, the Globetrotters had their own cartoon series that was animated by Hana-Barbera but was cancelled after two seasons in 1972. Some of the footage in this episode is lifted from the series.

The Harlem Globetrotters series, which ran from 1970-1972 would see the Globetrotters travelling around the world and getting involved in a local conflict. From there, they’d try to settle the issue by way of a basketball game, however, the game would always be rigged by the villains making it difficult for the Globetrotters to win.

They also had a dog, named Dribbles, who does not show up in this episode.

The globetrotters were not voiced by themselves, but by voice actors. Most notably Meadowlark who is voiced by Scatman Crothers, who also had some memorable appearances in the Shining and One Flew over the Cuckoo’s Nest. However, I enjoyed him the most in the 80’s flick called Zapped.

As far as trivia,

Redbeard’s Ghost model sheet, along with the henchmen, are lifted from the Season 1 of Scooby-Doo Where Are You, from the episode Go Away Ghost Ship, so we do get a familiar villain here.

Also, none of the villains are unmasked at the end of this episode, which is something that rarely happens in the world of Scooby doo.

The Globetrotters cartoon appearances was later parodied in the late 90s on Futurama. 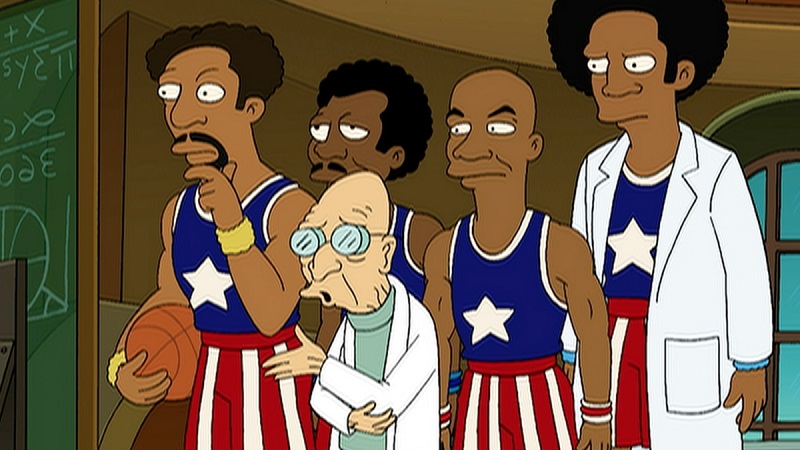 With this being the first of 3 Globetrotter appearances, will I enjoy this episode, and look forward to seeing more guest star appearances? Let’s find out!

The Ghostly Creep from the Deep – Episode Review

The episode begins with the gang lost in a swamp while driving the Mystery Machine. Behind them they see two glowing eyes, which turns out to be the Harlem Globetrotter’s tour bus. They are lost as well after attempting to take a shortcut, and are tailing the Mystery Machine as they feel the gang will lead them out.

Freddy suspects he is being chased, so he races ahead and crashes the Mystery Machine in the swamp. From there, they see a ghostly pirate ship sailing through the swamp. 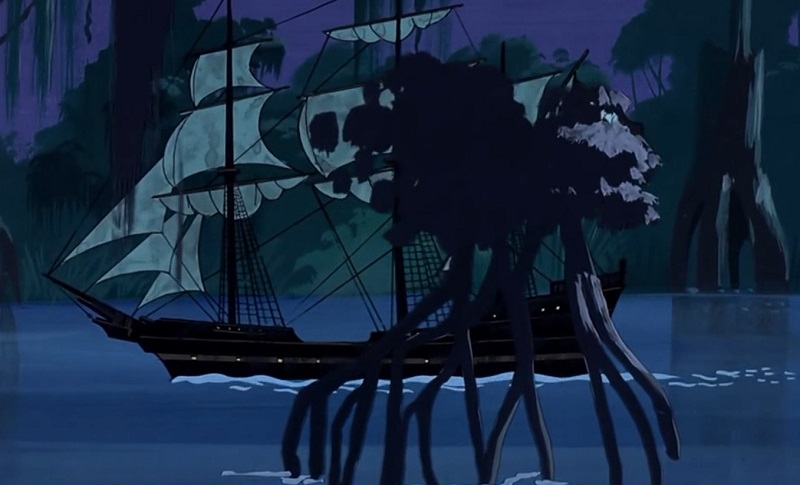 The Globetrotters crash their tour bus into the swamp as well, and now everyone is stuck. Fortunately, they spot an old Inn nearby so everyone goes to investigate. While standing outside, they hear a ghost voice say “Leave This Place”

While the gang debate what they should do next, we cut to an elderly hermit man watching from a remote spot.

Scooby, Shaggy and Meadowlark go back to the vehicles to get Meadowlark’s Lucky basketball, while the rest of the gang and globetrotters investigate further. Outside they meet the Hermit who warns them of Red Beard the Ghost Pirate and tells them to leave.

The Inn is boarded up so one of the Harlem globetrotters smashes down the front door. As soon as they enter, they hear the cackling of one of the ghost pirates. Unknown to the gang, it’s just the hermit up above on a balcony, doing his best to scare them off.

In order to distract themselves of the scary noises, the Harlem Globetrotters start up a basketball game and perform their neat trick shots about the Inn as they warm up.

After a bit of fun playing against each other, the gang and globetrotters decide to get some shuteye. Except for Curly as he’s placed on guard duty for the first watch.

Outside the hermit sees the pirate ship, and onboard the ship we finally see Red Beard the ghost and his ghostly crew. Red Beard sees that there are guests in the house and declares he’s going to give them a spooky surprise. 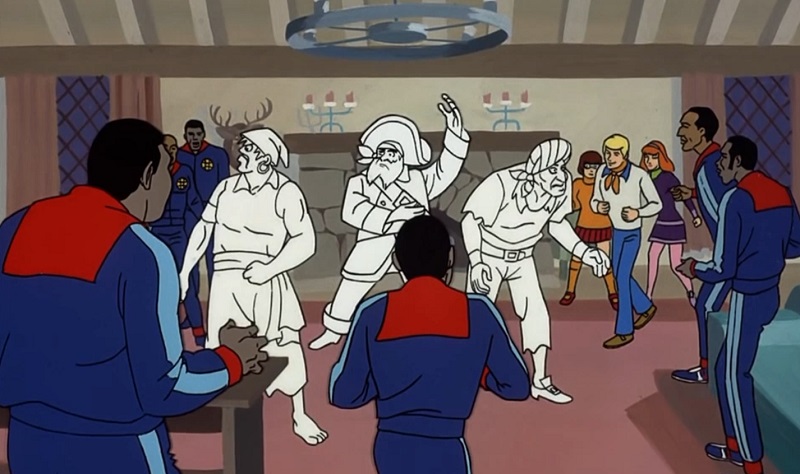 Redbeard and his two henchmen enter the Inn and try to capture the gang and Globetrotters, however, the pirates are outnumbered and fail at their attempts.

Redbeard then threatened to unleash hundreds of ghost upon the gang using his cursed skull and the gang and the globetrotters surrender.

Before Redbeard can make them walk the plank, a helicopter flies past the Inn, and Redbeard vanishes in a plume of smoke.

Velma spots some oily footprints on how the ghosts escaped, and a new mystery is afoot. Scooby goes to investigate and falls through a trapdoor with Shaggy and they fall into Redbeard’s dingy below.

The gang realize what has happened, and looking outside the window they see Scooby and Shaggy hiding in Redbeard’s Dinghy as the pirate heads towards the ghost ship.  The gang and the globetrotters hop in a motorboat and take chase after Redbeard’s pirate ship. The boat is easy to follow as Shaggy has left a trail of floating Scooby snacks.

It also doesn’t take long for Redbeard to discover Shaggy and Scooby and we get a long chase scene aboard the pirate ship. Eventually the gang and the globetrotters show up and they spot some oil rigs near Redbeard’s pirate ship.

The chase scenes continue, until the gang capture Redbeard and his gang. The old Hermit, who we learn is named Swampy Pete, shows up and shows them that the spirit skull was just a skull that projected ghosts.

A police helicopter shows up and Swampy Pete removes his hermit getup to reveal himself as Lieutenant Pete Dugan of the harbor patrol. Redbeard was a crooked oil bootlegger who used glow paint to make himself look like a spirit.

The globetrotters are worried about missing their gang in Miami, so Pete calls a helicopter to get them to the game fast.

With another mystery solved, the gang along with Pete watch the globetrotters perform at their game against the Miami Marauders.

I give this episode a 6 out of 10. For a 44 minute episode, this one was pretty good. The globetrotter’s basketball antics broke up the monotony, so we don’t get really long chase scenes with tons of padding. And that’s something I liked.

The globetrotters were also a lot of fun and were entertaining. I just wish they spent more time introducing who was who as I felt that aside from Meadowlark and Curly, we didn’t really get to know any of the other globetrotters.

We also get a solid villain with Red Beard the Ghost. This ghoul and his projection skull had some personality and made for a fun villain.

Anyway, until next week when I will be covering The Phantom of Country Music Hall, Stay Spooky!