The Haunted Horseman of Hagglethorn Hall originally aired on December 2, 1972, and is episode thirteen of The New Scooby-Doo Movies.

Scooby and the gang can’t afford to “Monkee” around in this episode where they encounter the legendary Davy Jones. Davy is at risk of losing Hagglethorn Castle due to a ghostly horseman haunting the halls and scaring away all of the tourists. If Mystery Inc can\’t catch this phoney phantom, the Scottish fortress will be passed over by the selfish Duke of Strathmore.

The episode begins with the gang driving to a 14th century Scottish Castle that was brought to America brick by brick.  Freddy notices that he\’s almost out of gas, so he stops the Mystery Machine to ask a farmer for directions.

The farmer is named Cyrus Wheedly who is instantly spooked when they say they are looking for Hagglethorn Hall.  He says at midnight, a Haunted Horseman rides through the castle.  The horseman is a ghostly knight in armour, with a glowing horse, who\’s doomed to ride the corridor of the hall for all of eternity.

Velma scolds Mr. Wheedly for believing in such fairy tales.  However, just as she finishes her sentence, the knighted horseman rides by. 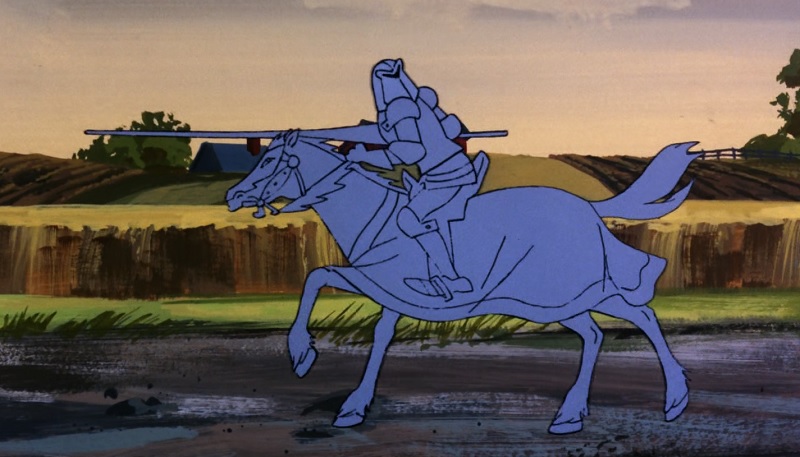 Despite Mr. Wheedly’s warning, the gang head off to Hagglethorn Hall, which is located just down the road.  The Castle turns out to be enormous, and even has a massive moat and drawbridge.

Shaggy accidentally activates the drawbridge and lowers it, so the gang head inside.  While crossing the drawbridge, Velma notices that the moat water is an inky black colour. Scooby also sees a giant frog in the moat, but the gang just write him off as being silly.

The castle door opens and the gang are greeted by the castle’s Major Domo, Creech,  who lets them inside. 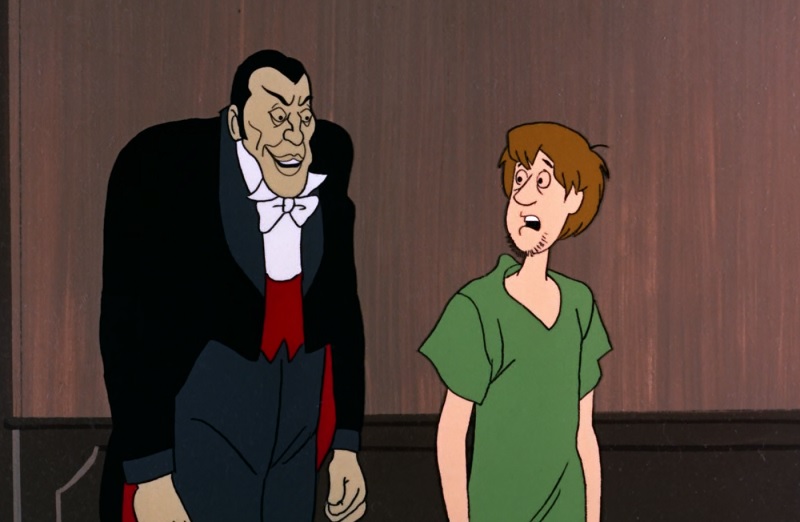 The Haunted Horseman then appears on top of the steps, giving the gang a good scare.  Fortunately, it just turns out to be Davy Jones wearing some protective armour made out of tin cans.  Daphne is no stranger to Davy Jones as Heather North appeared on an episode of the Monkees called “The Prince and the Pauper” as Wendy (near the 13 minute mark).

Davy Jones states he was only wearing the armour to scare away the real haunted horseman.  Freddy makes a remark that he would have only been able to scare his 3 year-old nephew, which is interesting as it would mean Freddy has a brother or sister. 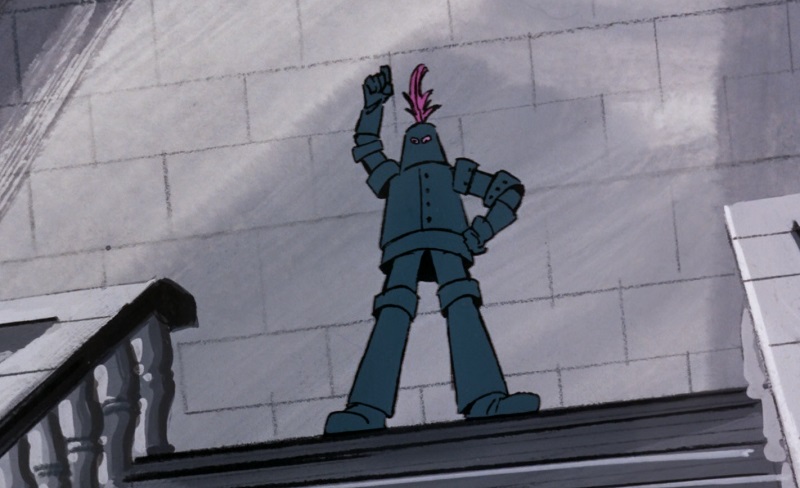 Davy then gives the gang a tour of the castle.  The first thing he takes note of is a framed painting of his uncle Sedgwick, the first Earl of Hagglethorn.

The gang decide to help Davy and his uncle, and go about the castle to meet the Earl.  Before they get to his room, the Earl has already written a note to sell the property to the Duke of Strathmore.  As the gang arrive, the Earl tells him he’s already made up his mind and plans on selling the place.

Davy’s uncle tells them they have until 8pm to solve this mystery, or else he will mail off the letter.

Scooby and Shaggy fall into the moat (after a mysterious figure in a suit of armour triggers a trap door) and Davy panics as there is a moat monster swimming in there as well.\r\n\r\n

Shaggy and Scooby ignore Davy’s pleads to get out of the water (as he’s enjoying the water, which is no longer black), until the giant frog finally makes himself known.  Fortunately Scooby and Shaggy get out before they end up as frog food.

Shaggy and Scooby decide to leave the castle but as they try to cross the drawbridge, Davy raises it up so they can not get out.

The gang split up in to two groups with Daphne, Velma and Davy Jones searching the downstairs while Freddy, Shaggy and Scooby search upstairs.

In the music room, Velma feels like they are being followed, and she’s right as there is a chair covered in a sheet watching her.

Velma clues in to the wandering chair, but before she can rip the sheet off, a piano covered in a sheet beings playing music.  Davy rips the sheet off the piano, and they see that it\’s only his cat named Jupiter.  Removing the sheet also causes a cloud of dust to emerge, making everyone sneeze.

The wandering chair also sneezes sending the sheet onto Davy, Velma, and Daphne, allowing whatever was underneath the sheet to escape unseen, aside from some footprints that the trio are able to follow.

Upstairs, Freddy, Scooby and Shaggy are coming up empty handed when it comes to clues.  Freddy hears some galloping, and the Haunted Horseman appears in the halls, chasing them away. 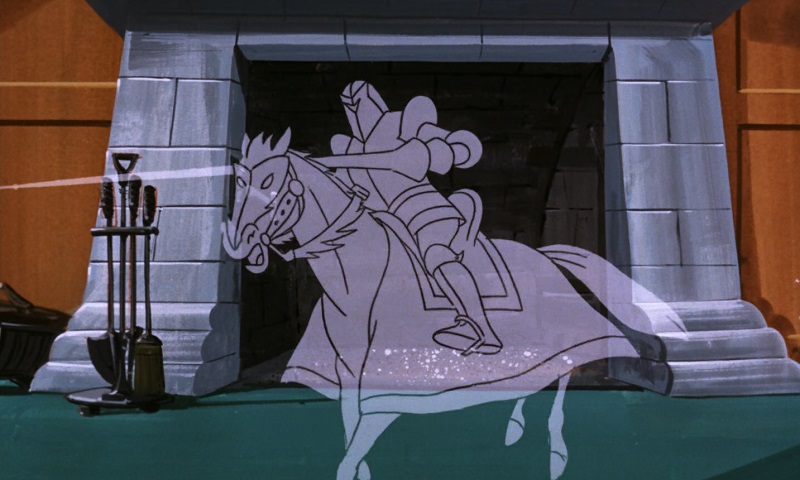 The three of them barricade themselves in a room, however, the apparition of the Haunted Horseman is able to move through the walls and chase them back out into the hallway where they run into Creech.  Creech vanishes just as quickly as he shows up, and the Horseman makes another appearance, chasing Scooby, Shaggy and Freddy about the castle once more.

Back downstairs, the footprints lead Davy, Daphne and Velma into a trap, where they are locked in a room.  A door opens, and a laughing suit of armour strolls in, which Velma tells Davy to tackle.  Davy leaps at the Horseman, but passes right through the ghosts body.

Velma spots a ray of light in the dark, and they discover a movie projector that is projecting the ghostly apparition.  Daphne also finds a secret passage, which they decide to venture down.

Upstairs, Freddy, Scooby and Shaggy are still being chased by the Haunted Horseman until Creech rescues them.  Freddy then finds a horseshoe nail and figures out that real horse would not be wearing horseshoes.  They also discover a secret passage which explains how the Horseman was passing through walls.

In a subterranean cavern, Davy, Daphne and Velma run into the moat monster.  Cornered, Davy sings the moat monster a song so they can escape in one piece.  Here, we get a nice little music interlude where Davy sings “I can make you happy” which we previously heard in Mystery Mask Mix-Up.

Scooby, Shaggy and Freddy make there way through another secret passage and end up with Daphne, Velma, Davy, along with the moat monster in an underground cave.  Howling out of fear, Scooby causes a cave stalactite to fall down and pin the Moat Monster to the ground.  We then see a man in a wet-suit emerge from the frog costume.

The gang chase the man in the wet suit but he evades them by lowering a stalactite gate.  Shaggy figures a way to maneuver around it and they find more footprints to track the villain down.

The tracks lead to a dead end, and Davy discovers a lost horseshoe, which means they are closing in on the bad guys.  Shaggy finds a hidden switch, and they enter yet another secret passage.

The passage takes everyone to a barn, and Velma figures out that they are on Mr. Wheedly’s farm.  Here they also find a barrel of glow in the dark paint.  Shaggy, who we found out at the start of the episode, is allergic to hay, sneezes, and reveals the man in a diving suit hiding in a corner.

The Haunted Horseman barges into the barn to come to the frogman\’s aid, but ends up getting snagged on a rope and then pinned underneath a bale of hay.

With both villains caught, they are unmasked and it turns out the Horseman is the Duke of Strathmore, and the Frogman is Cyrus Wheedly .  The duke wanted the castle sold to him so he could take over.  For helping the Duke scare off tourists, Cyrus Wheedly would have collected half of the money from the sale of the castle.

Davy’s uncle, Sir Sedgwick, thanks everyone and is worried about the scandal this would cause for his family name in the media.

Davy, fortunately, has a brilliant idea to put the Duke and Cyrus to work as actors by turning the Castle into a thrill attraction where tourists can see the fake ghosts and moat monster in person as an attraction.  With another mystery solved, the gang drive off into the sunset.

I give this episode a strong 7.5 out of 10.  As far as the New Scooby-Doo movies go, it\’s one of the better ones, and has an interesting concept.

What I loved about this episode was Davy Jones.  He was incredibly charming, and his talented voice work elevated this episode.  It was very cool hearing him sing, and I\’m so glad they used his vocal talents.  I wish Sonny and Cher sang something in their episode.

In real life, the Haunted Horseman might be one of the deadliest villains in Scooby-Doo history.  Here we have a man in bulky armor, riding around on a horse inside a castle with deadly weapons in his hands.  In real life, he could accidentally kill someone with ease.  If a glow in the horseman was riding at me with a lance down a narrow hallway in a haunted castle, I\’d be be running a way too!

The frog, on the other hand, was more cute than scary.  And the dance everyone broke out into didn’t live up to the classic chase scenes we got in Season 2 of Scooby-Doo.  However, even though the chase was silly, I enjoyed it.

It was also interesting seeing Freddy split up with Shaggy and Scooby.  Normally Freddy never actually sees the ghost right away, and now that he finally does, it’s funny to see him not to know what to do.

Like most Scooby-Doo Movie episodes, there is a bit of padding here.  Had this been a 22 minute episode, I think my rating would be a strong 9 out of 10.