Mystery Mask Mix-Up is episode #2 of Season 2 of Scooby-Doo, Where Are You! and it originally aired on September 19, 1970.

In this episode we get some Chinese mythology, and some great chase scenes around Chinatown, where I am assuming it’s in San Francisco.  We also get a chase scene song called ‘I Can Make You Happy’ performed by George A. Robertson Jr.

If you haven’t seen this episode yet, I highly recommend you watch it before reading my review (which contains spoilers galore!)

Hundreds of bats fly out of a Chinese temple where we meet two cloaked men who are praying in front of a giant statue with a large flame in front of it. Suddenly, a man emerges from the fire and speaks to the two Zombie minions. He tells the two to retrieve the mask of Zen Tuo and not return until they get it.

Fireworks are shooting off left and right when we meet the gang, as they are watching a parade within Chinatown. After Shag’s and Scooby’s clumsy antics, Velma suggests they should visit a curio shop. Inside one Curio shop, a store owner shows Daphne a golden mask, who thinks it\’s groovy and decides to purchase it. As the gang leave the store, we see the two cloaked men enter it and then question the store owner where the mask is. The man tells the two that he just sold it to a young girl.

Now off to get a chop suey malt, Shaggy, Scooby, and the rest of the gang run into the two cloaked men who ask for the mask. Daphne tells the two that they can not have it. Velma then tells Scooby to make like a watchdog. Scooby growls and barks at the two men, but they remain un-amused. Scooby then goes into a Chinese Laundromat, pulls out a shirt presser and makes a steam smoke screen, which makes a diversion for the whole gang to run away.

It turns out the Golden Mask was stolen many centuries ago from the crypt of the great Warlord Zen Tuo. Now his ghost has returned to claim the mask. The two Hooded men are his advisories of the living dead. In other words, they are Zombies! Mr. Fong also informs them that as long the mask is in their possession, they are in great danger.

The gang then take off in the Mystery Machine where they notice they are being followed by the two Zombies. Who knew Zombies could drive cars. Chase music emerges to George A. Robertson Jr’s “I Can Make You Happy”. The Zombie’s car chases the gang throughout Chinatown, where they eventually crash into a pile of dead fish at the Fisherman’s Wharf.

Covered in dead fish  the gang emerges all except for Daphne.  Poor Daphne is instead, bound and gagged in the backseat of the  Zombies’ car.

No need to panic though, Scooby can sniff out their car. Wrong, all poor Scooby can smell is fresh fish. Still no need to worry about Daphne, as CLUE #1 has been found, an old Chinese Laundry Ticket with the following words written on it. 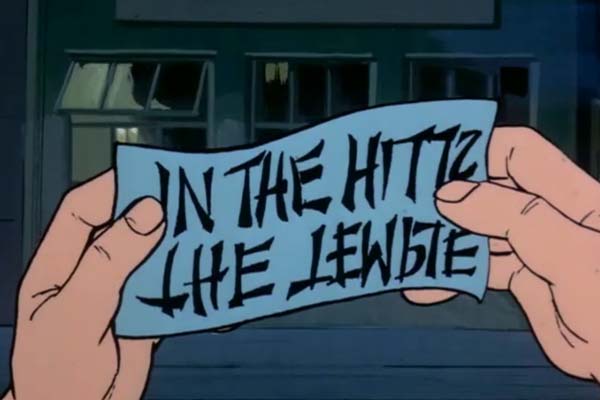 Seeing the reflection of the ticket in Velma\’s glasses, Scooby directs the gang to the Mystery Machine\’s mirror where the proper message is “The Temple In The Hills.” Velma knows exactly where the temple is and also knows that is supposedly haunted.\r\n

The Haunted Temple in the Hills

The Mystery Machine pulls up in front of the haunted temple and the gang enter, with Scooby\’s teeth chattering like crazy. The gang split up in search of Daphne, with Freddy and Velma going one way and Scooby and Shag going another. Unfortunately, they do not know Zen Tuo and his two henchmen staring down at them from up above on a balcony.

As Freddy and Velma walk past a statue, it opens up revealing a hole in a wall. There they spot Daphne gagged and tied to a chair who tries to speak to them. As Freddy pulls off her gag, she tries to warn them that it\’s a trap, but it is too late, the statue slams shut, locking them in the room. They now need to rely on Scooby and Shag to get them out.

Shag spots a curtain and he and Scooby enter it where they walk into the Ghost of Zen Tuo.  They try to bluff him by pretending to act tough, and Shaggy warns him that he knows Judo, Chop Suey and Chinese Checkers.  Noticing that Zen Tuo is not amused, they run off right into the hands of the two Zombies.

Running from the Zombies, Scoob and Shag run into a door and emerge wearing waiter costumes. Shaggy then welcomes the Zombies to Shag’s and Scooby’s Haunted Chinese Restaurant, the place where ghosts eat the most. He then sits them at a table, tying the table cloths around their necks and placing bowls of Chocolate Chop Suey and Spare Ribs a la mode in front of them before taking off. As they run away, they run into the Ghost of Zen Tuo who ties them up on top of a massive pile of fireworks.

Zen Tuo then lights a long fuse with the plan of blowing our dynamic duo sky high. Scooby and Shaggy, who are tied back to back, bounce off the pile of explosives and try to smother the lit fuse with their rear ends. They end up getting burned and bounce their way right out of the room and into the hands of the statue, which triggers the door to open up where Daphne, Fred and Velma are stuck in.

With the whole gang reunited, they go in search for clues and Daphne remembers seeing one, a pigeon coop. Velma explains that there are carrier pigeons in the coop and finds CLUE #2, a message that reads:

Velma is satisfied that the mystery is now solved and Freddy has a plan for a trap, which he needs:\r\n

The plan is supposed to work when the Ghost of Zen Tuo steps through a door and onto the gong which is attached to the train and the rockets. When he steps on the gong, Freddy will pull a string, which triggers a mousetrap, which has a match tied to it, which will ignite on some sandpaper and ignite the rockets sending the Ghost of Zen Tuo into the pigeon coop.

The trap does work at first, sending Zen Tuo flying. However Scooby is a little slow at lying down the train tracks and Zen Tuo on his flying gong goes off track and around the temple where he crashes into Scooby, his two Zombies and finally out of a window where they get snagged on a tree.\r\n

Mr. Fong turns out to be the Ghost of Zen Tuo, a leader of an international Smuggling Ring.  Mr. Lee, a local police officer, arrests Zen Tuo and his two henchmen right then and there.  Velma explains to Mr. Lee that the mask had a tape recording of a secret message in it. When Mr. Fong got the recordings, he wrote them and sent them by carrier pigeons to his affiliates.

The ghost was just to scare any curious people away from his smuggling scheme. And he would have gotten away with it too if the mask was not sent by accident to another store instead of his.

Velma has one Scooby Snack and throws it up in the air for Scooby and Shaggy to fight for. Instead, they both miss and it lands on the floor where a mouse snags it.\r\n\r\n

This is a fun episode where that reminds me a lot of Big Trouble in Little China (event though it precedes it by 15 years or more). We’ve got some fantastic Chinese mythology with Zen Tuo and a couple of mysterious Zombies.

For me the villain tends to be my biggest factor for my enjoyment of an episode and I don’t find Zen Tuo all that memorable.  Although I do like his Zombie but I think that\’s because they get more air time during the chases.

All in all, this is a fun episode with some great action and chase scenes and I’m sure it’s a favourite to many!

Scooby’s Night with a Frozen Fright