Jeepers, It’s the Creeper is the third episode from Season Two of Scooby-Doo, Where are You!  It originally aired on September 26, 1970, and features the mysterious Creeper disrupting the gang’s school dance.

If you’d like to own this episode, you can buy it either on Blu-ray or DVD.  The Blu-ray (released in 2019 on Scooby’s 50th Birthday) currently comes in a limited edition haunted house box, and features 15 hours of Scooby-Doo + extras.  It’s very cool and makes an excellent gift for any Scooby-Doo fan!

Who is the Creeper?  Well, if you don’t know, be sure to watch this episode first before my review as spoilers galore!  Now on to the review!

A uniformed bank guard is driving through the countryside at night when he is stopped by a fallen tree that blocks the road.  As he gets out to investigate, the green-faced Creeper lumbers out of the bushes and approaches him from behind.

Meanwhile, the gang are on their way to an old farm, where their school dance and a hayride are being held.  Shaggy is really excited for the buffet, particularly the chocolate covered corn on the cob.

On the drive over, they come across the bank guard’s car, and they find him knocked out, and his car ransacked.  The bank guard regains consciousness and shoves a blank piece of paper to Freddy.  Before passing out again, the guard mutters “The flame will tell The Creeper” 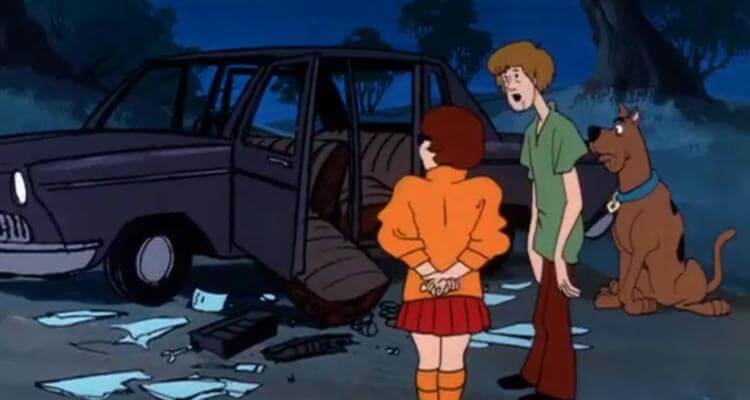 Scooby finds a piece of paper with the Bank President’s address.  Realizing that he lives close, the gang drive the bank guard to the President’s house to get some help.

The Bank President’s name is Mr. Carswell, and at his house, he explains that the Creeper is a phantom who has been robbing his bank.  Each time the bank is robbed, the doors and windows have always remained locked, meaning this Phantom can walk right through walls!

Freddy tries calling the Sheriff but is told the local sheriff will be out of town for the next several hours.  Mr. Carswell then asks if the gang found any clues, to which they tell him of the blank piece of paper the guard gave them.  Promising to look after the guard, Mr. Carswell sends the kids off to their school dance.

While everyone is having a grand old time at the dance, the Creeper sneaks up and throws the main breaker. With the lights off and the music gone all the kids, except for the gang, drive off to the Malt Shop.  The gang instead stays behind to clean up, and as Scooby and Shaggy are taking out the trash, they bump into the Creeper! 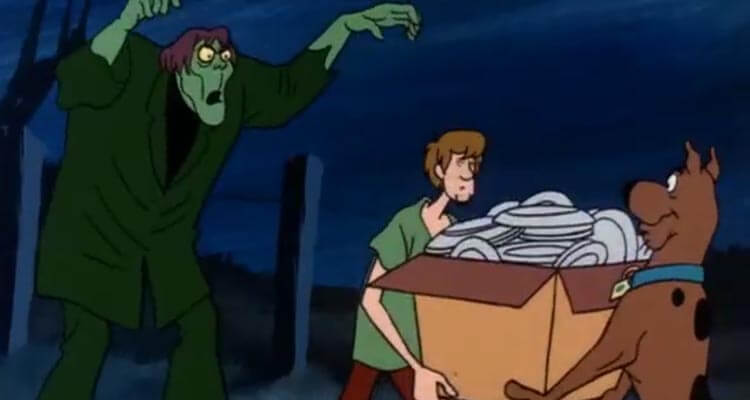 The Creeper demands the “Paper” from them and chases the entire gang around the countryside.  Backing this extended chase scene is the song Daydreamin’ which is all about being in In Love with an Ostrich.  During the chase, the gang are split up, with Shaggy & Scooby zigging one way, and Freddy, Daphne and Velma heading off in another direction.

After ditching the Creeper, Freddy, Velma and Daphne discover a car hidden in the bushes.  While there is no identification inside, they do find several torn-up photograph negatives on the floorboards. 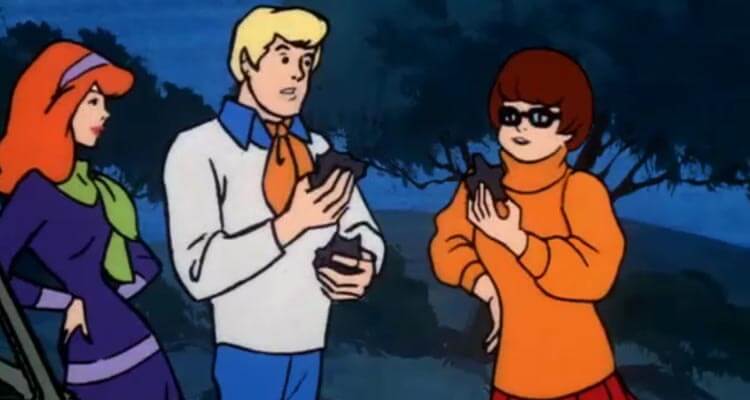 The gang reunites and find some footprints which lead to a rope bridge over a gorge.  The bridge part is furled up, so for a Scooby Snack, Scooby tightropes his way across the bridge and unfurls it for the rest of the gang to get across.  Inside the cave, they find the “Hermit of the Hills”, a chatty and lonely old man living in the cave. While the Hermit of the Hills is friendly enough, his cooking of squirrel stew with pickled bat wings and crab grass roots is so terrible, it scares the entire gang away.

Back at the Mystery Machine, they find the Creeper behind the wheel waiting for them. The Creeper chases them, and during the chase, everyone, but Scooby falls into a hay bailer. There everyone is neatly bound up, meaning the Creeper has been caught.

Unmasking the Creeper, we find out that is Mr. Carswell. Mr. Carswell had been robbing his own bank by stuffing his briefcase with money during the day.  Later at night, he\’d return as the Creeper and run outside the bank until someone saw him, so they\’d think the bank had just been robbed.  However, the security guard had smartly installed an infrared camera that caught Carswell in the act, so Carswell had to silence the guard before he was caught. 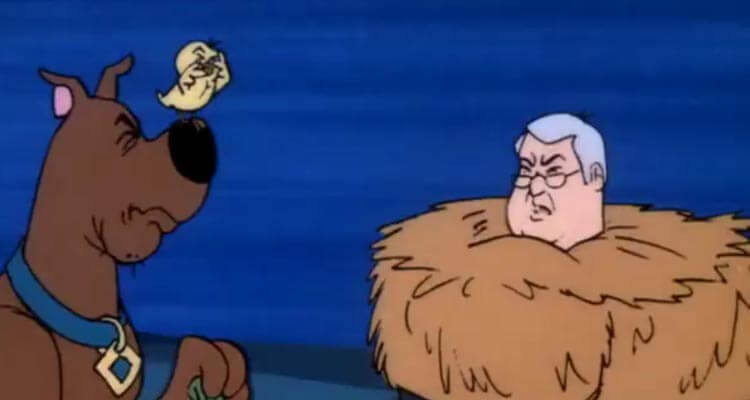 The Sheriff arrives to apprehend Mr. Carswell and explains that he found the guard tied up in Mr. Carswell’s basement.  Velma lights a match and holds it under the paper the guard gave them, revealing Mr. Carswell stealing the money red-handed.

Satisfied, the Sheriff drags Mr. Carswell off to jail, and another Mystery is solved!

I give this episode a 9.5 out of 10.  This is classic Scooby-Doo at its best.  We get an interesting and entertaining Villain, as well as an intriguing plot.  The jokes here are fantastic, especially Shaggy’s love of chocolate-covered corn on the cob.

The Creeper himself is rather scary.  He\’s a big brute of a man, with a scary face, and the ability to travel through walls.  I love how he lumbers around and shows up to snatch his latest victims!

The mystery is also set up quite nicely at the start as to who the Creeper could be.  And the fact that this took place in the creepy countryside also adds to the spooky atmosphere.  It’s no wonder that this episode often makes everyone\’s top 10 favourite classic Scooby-Doo episodes.