Haunted House Hang-up is episode 2 of season 2 of Scooby-Doo Where Are You and sees the gang broken down in front of an old haunted mansion. Requiring some water to get the Mystery Machine up and running again, they run inside only to find a headless spectre and a mystery of a hidden fortune.

The episode originally aired on October 10, 1970 and many Scooby fans claim this to be their favourite Scooby doo episode ever.

As it is a season 2 episode, we get a fun chase song and scene with ‘Love the World’ along with some fun gags, and a touch of mystery but does this episode still hold up? Let’s find out!

The episode begins with a headless man holding a candle walking through a dilapidated mansion.

We then cut to the gang travelling in the mystery machine to a rock festival. I’m rather jealous as they’re probably off to see Led Zeppelin, the Rolling Stones, the Who or Black Sabbath who were among my favourite bands and were popular at the time.

The gang just so happen to be lost, probably due to one of Freddy’s ‘short cuts’, so they stop to get a better look at a sign that is unfortunately unreadable due to weathering.

A man, by the name of Asa Shanks approaches them and tells them they should get on their way. They’re looking for interstate #5 until they come to a fork in the road. The Right way is the short way and the left is the long way, but the man advises they take the long way as the short way will take them past the haunted mansion which is bad news bears due to it being haunted by the headless spectre.

Freddy enquires more about the Headless spectre, but the man tells the gang that nobody has ever met the specter and lived to tell about it before blowing out his lantern and disappearing into the darkness.

Shaggy and Scooby run off to a nearby well to get some water to cool down the Mystery Machine, however, they are confronted by a ghost rising from the well. Running back to the rest of the gang, he tells them about the ghosts.

Looking down the well they see nothing but water. Since there is no bucket to even get any water they decide to head into the house in hopes of finding a bucket. Since there is a light on in the mansion they hope someone can help them.

Knocking on the door, it opens up wide, so the gang walk in. A floating candle immediately chases them and the gang end up in a spooky old room where Shaggy sees a portrait of Jefferson Stillwall who is pointing at something.

Shaggy looks to see what he is pointing at, but when he looks back, the portrait is missing his head. When he points it out to the gang, the head has returned. 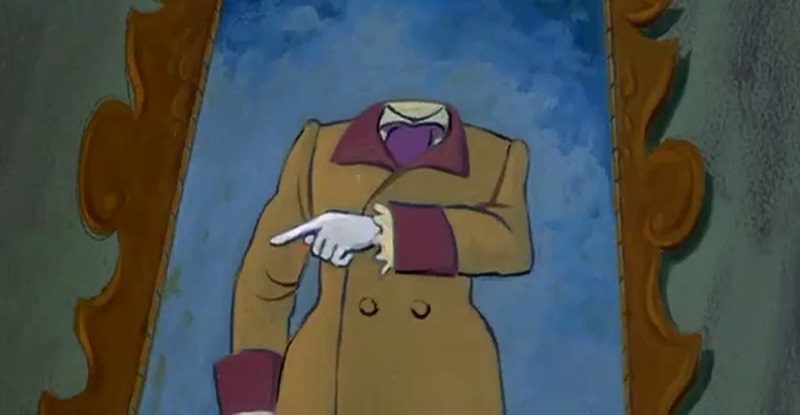 Freddy thinks they’ve stumbled upon some kooky mystery so they search the room for secret passages. They also hear a knocking to which they go and investigate. As they leave the room, the headless spectre enters and lets out a mysterious laugh as he goes through a secret passage and puts a decorative box down on a table..

Freddy knocks on the head and is relieved to discover it’s made out of wood. On the ground they see some footprints which eventually head off in two different directions. Shaggy, Scooby and Velma head off in one direction while Freddy and Daphne go in another.

Shaggy, Velma and Scooby walk into a dark room and decide to hold hands so they don’t get separated. Complaining about how cold each other’s hands feel, they exit the room only to find that they are holding the hands of the headless spectre.

The spectre laughs as they run off and we cut to a chase song where the spectre chases them around the mansion. The chase ends with Shaggy, Velma and Scooby landing in the well where they find a secret tunnel. Heading inside they go exploring.

Elsewhere in the mansion, Freddy and Daphne find an old diary. Inside they find an entry from July 12, 1822 which says Marching men in single file hide the secret, Stillwall shows the way.

They also find a trap door in the room which leads to an old fruit cellar. Going down the trap door they run into Shaggy, Scooby and Velma. Starving, Shaggy opens up a can of food only to find balloons inside. Velma also finds a tank of helium.

Realizing that the floating ghost they saw before was a balloon with a sheet of it, Freddy gets closer to the mystery. He also realizes that the portrait of still wall pointing is also a clue, so they head back to the den.

Velma figures out that he is pointing at a column, but when they look at the picture he’s pointing outside to a greenhouse. Shaggy and Scooby go out to investigate and run into a fly trap as well as the headless spectre.

Running away, Shaggy and Scooby run into the fruit cellar and use the helium balloons to escape back up the well.

Despite not having a head, the headless spectre is now dazed, and pops his head out where we find out it’s PENROD STILLWALL the great, great, great grandson of Jefferson Stillwall. He rigged the haunting floating ghosts and headless picture to scare people away as there is a hidden treasure in the mansion that is rightfully his.

Once more hearing thumping noises, Freddy decides that someone else is looking for the treasure and sets a trap. They confront the ghost, which is a man with a sheet on his head. Freddy’s trap works and they unmask the man who turns out to be Asa Shanks, the Stillwall’s greedy neighbour. 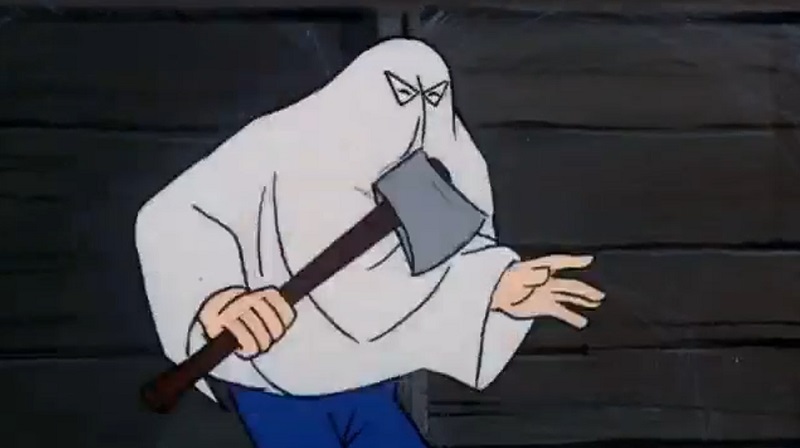 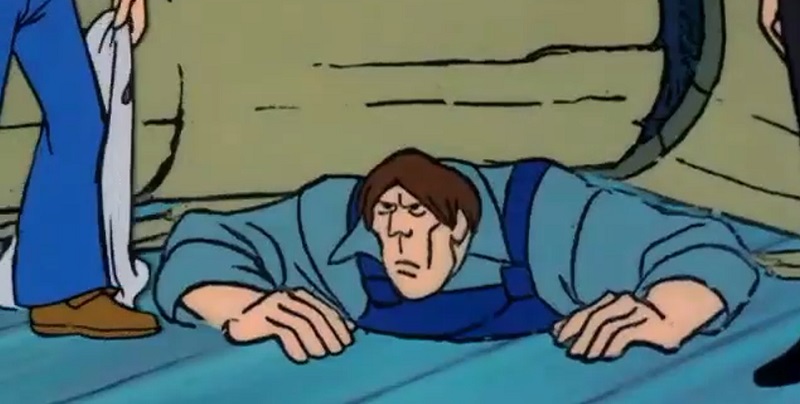 When they trapped Asia, he tripped into and knocked down a pillar where they find the fortune in a carpet bag. As an aside, I had no idea what a carpet bag was, but it’s just a top opening bag that was made out of oriental carpet back in the 1800s.

Satisfied, the gang head off after Mr. Stillwell points them in the direction of a pizza parlour. They tie up the loose end that the Portrait had been moved so it was no longer pointing at the right column, which is why the fortune had been lost all these years.

I give this episode a 9 out of 10. This is one incredibly fun episode full of spookiness and humorous gags. The Headless spectre looks cool, and I love that the villain behind it was a little playful and had fun trying to scare people away with his headless portrait and head in the box gag.

Why this isn’t a perfect 10 out of 10 for me is that I lean more towards spooky episodes. While Scooby is intended for kids, and the chase scenes do lighten things up, the songs always tend to pull me out of the moment. So you don’t get those really chilling episodes like the Spooky Space Kook or A Night of Fright is no Delight.

The whole balloon thing is rather silly too, and the sheet on the balloon looked too cartoony. In earlier episodes like Which Witch is Which or the Ghost Clown episode they had much scarier balloons.

The final ghost actually looked creepy, but this is because it reminded me of sack headed Jason from Friday the 13th part 2.

Still, I love this episode and highly recommend it! It’s a fantastic episode to show to kids who frighten easy as the episode has a spooky tone, but the scares are played more for laughs.

Join me next week when I’ll be covering Who’s afraid of the big bad werewolf! Until then, Stay Spooky