A Tiki Scare is No Fair is episode 6 from season 2 of Scooby-Doo, Where Are You.  It originally aired on October 17, 1970, and it saw the gang on vacation in Hawaii.  This episode also has one of the most fondly remembered villains – The Witch Doctor.  If you’d like to own this episode, you can buy it on Blu-ray or on DVD.  Both formats contains three seasons of Scooby-Doo, Where Are You!  This means you 41 episodes in total running over 15 hours.  It’s perfect for any Scooby fan, both young or old.

The episode opens with Shaggy and Scooby enjoying a luau feast on the Hawaiian Islands.  The gang were invited to the luau by John Simms, a local newspaper reporter who is also giving them a tour of the Hawaiian islands.

While Shaggy is enjoying the feast (apparently it’s his 47th luau in a row), he is dreading the next day as the rest of the gang (who are back at the Pineapple Parlour)  have plans of visiting an ancient village of a lost tribe.  John Simms is also concerned and warns Shaggy that he should stay away from that haunted village. 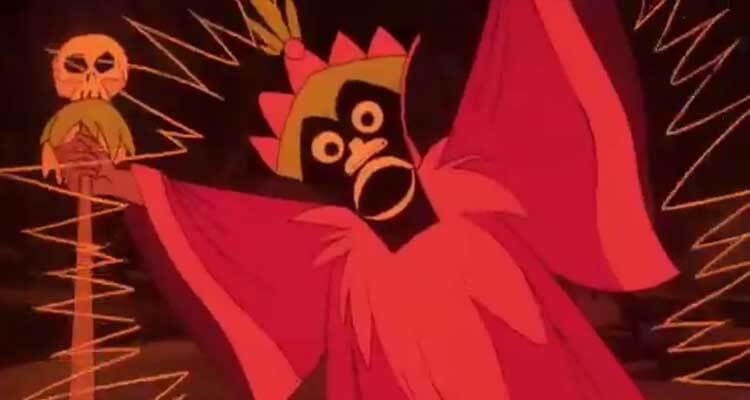 Just after Mr. Simms delivers his warning, ghost drums begin beating, and the iconic witch doctor appears and tells everyone that they are on the forbidden ground of Mano Tiki Tia and must leave.  The villagers waste no time in running away, and Shaggy finds himself alone.  Not even Scooby can be found! 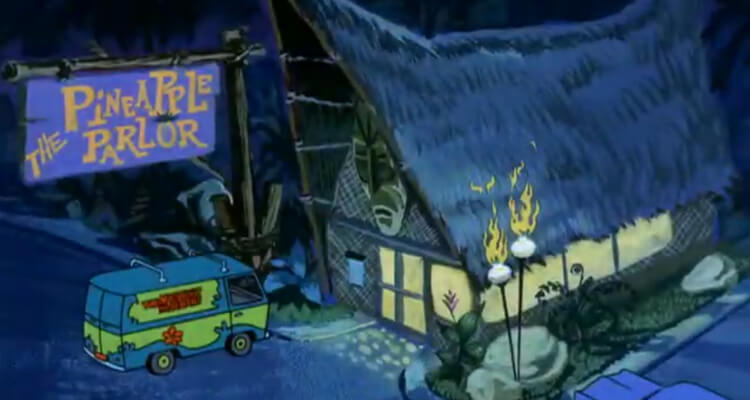 Shaggy dashes to the Pineapple Parlour and tells the rest of the gang (who are dancing to some pretty funky music) about the Witch Doctor and the disappearance of Scooby and Mr. Simms.  Returning to the abandoned luau, the gang spot a ghost drum beating.  While this is startling at first, they soon discover it’s just Scooby hiding in a drum.  Velma also spots and old man, but he soon disappears into the jungle before anyone can get a good look at him.

The article states that villagers have been terrorized by a ghostly legend that has come to life called Mano Tiki Tia. 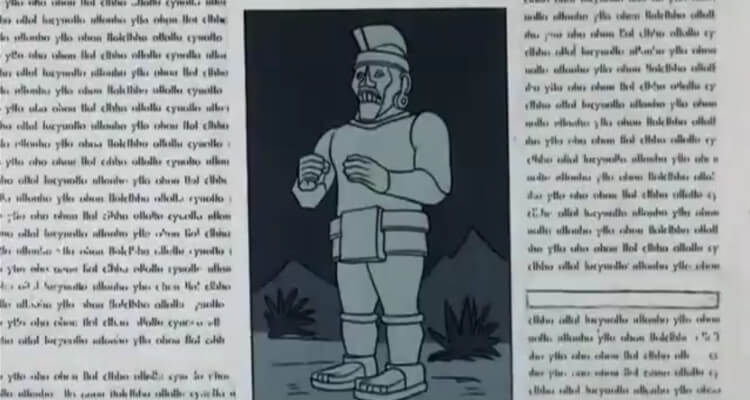 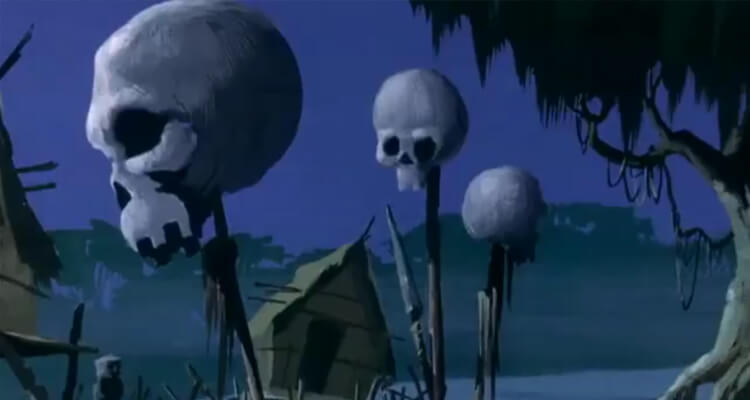 Exploring the haunted village they soon bump into the Witch Doctor, and a chase ensues.  A series of trap doors separate the gang and Shaggy, Scooby and Velma find themselves lost in the jungle. There they find an abandoned airplane that has a fake chattering skeleton.  The airplane is also covered with plastic vines to look like it has crashed. 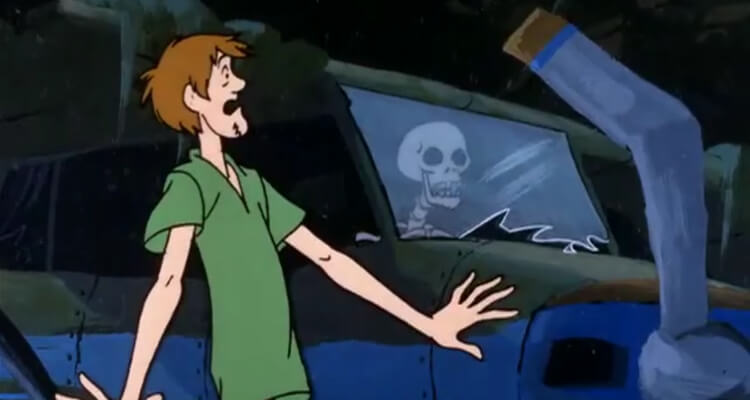 Meanwhile, back at the village, Daphne and Freddy find an abandoned shack full of oyster shells and pearls.

Eventually, the entire gang reunites and spot the old man swimming in a lagoon who has been playing hide and seek with them during the whole episode.  Chasing after him, the gang dive into the water and end up in hidden underwater cavern that leads back to the village.

Back at the village the gang bump into the Witch Doctor who animates the statue of Mano Tiki Tia to life.  The statue rolls after them on roller skate wheels attached to its feet.  There it starts chasing the gang from shack to shack.  After escaping, and another encounter with the Witch doctor, Freddy devises his trap. 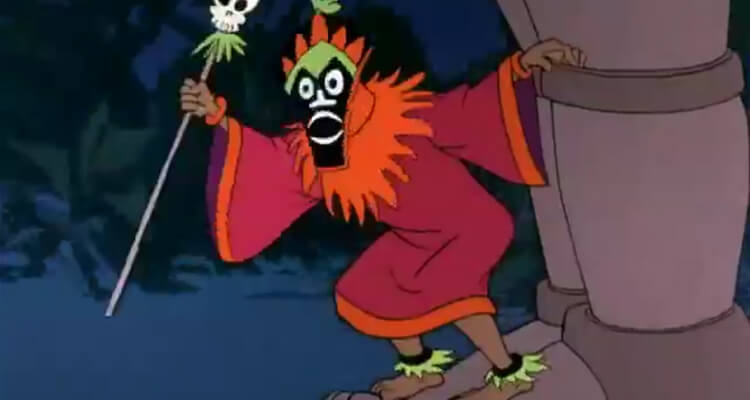 Trapping the witch doctor in a pit, the gang reveal that the true villain is John Simms.  Mr. Simms, along with his henchman who controlled the statue, was trying to scare the villages away from his pearl poaching operation.  The henchman also posed as the Witch Doctor at the luau so Mr. Simms wouldn’t be suspected. 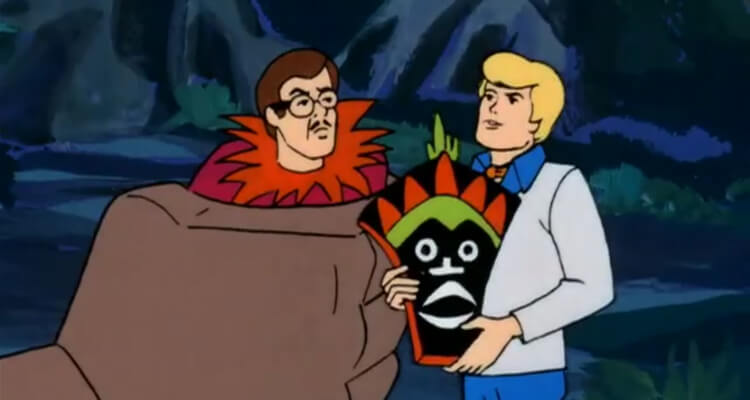 The old man appears, and it turns out it is a young police officer in disguise named lieutenant Tomoro.  This entire time he was working undercover, trying to crack this case. 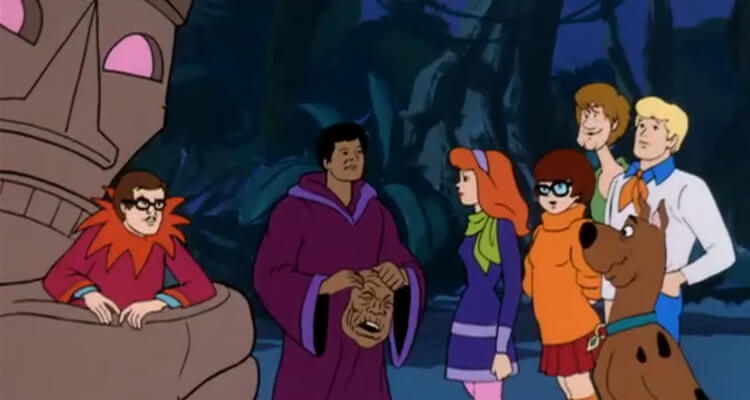 Thankful for the gang’s help, he treats them to their 48th Luau on the Island.

This is an essential episode of Scooby-Doo.  The Witch Doctor is one of the most notable villains, and for good reason, he looks cool and it’s fun to watch him.

The creepy old man was a nice touch, and it was cool to see the Gang in Hawaii.  Hawaii is such a fascinating American state, with lots of indigenous lore and tradition.  This adds a bit of freshness to the Scooby-Doo formula as the gang are entirely outside their regular element.

This episode is also a lot of fun. We get a haunted village full of old skulls, a talking skeleton, a giant statue on roller skates, and a creepy old man popping in and out playing peek-a-boo with the gang.