Who’s Afraid of the Big Bad Werewolf is episode 7 of Season 2 of Scooby-Doo Where Are You!

Originally airing on October 24, 1974, this episode features the gang encountering a werewolf on a camping trip.

While we get a quick shot of the Mystery Machine, it’s never driven in this episode. This is also the first episode where Freddy, Daphne and Velma see the ghost before Shaggy and Scooby. Finally, the episode references Laurel & Hardy which is pretty cool as they turn up in The New Scooby-Doo Movies, the Ghost of Bigfoot.

Is Who’s Afraid of the Big Bad Werewolf a howling good time, or is it a giant hairy mess? Let’s find out!

The episode begins with a wolfman howling at a full moon. We then cut to the gang who are out on a camping trip and are feasting on a few hotdogs before turning in for the night.

While eating, the gang hear the howl of the werewolf, and also see his glowing red eyes in the forest. Thinking it was just a wolf, Freddy decides to go look for it and they find some tracks. Velma finds the tracks unusual as it only shows two feet, and wolves are four legged animals.

Realizing they’ve discovered a werewolf, Velma insists they continue following the tracks where they come across an old graveyard. Here they find an open grave with an empty coffin along with a tombstone that reads ‘Here Lies Silas Long – Half Man and Half Wolf’. 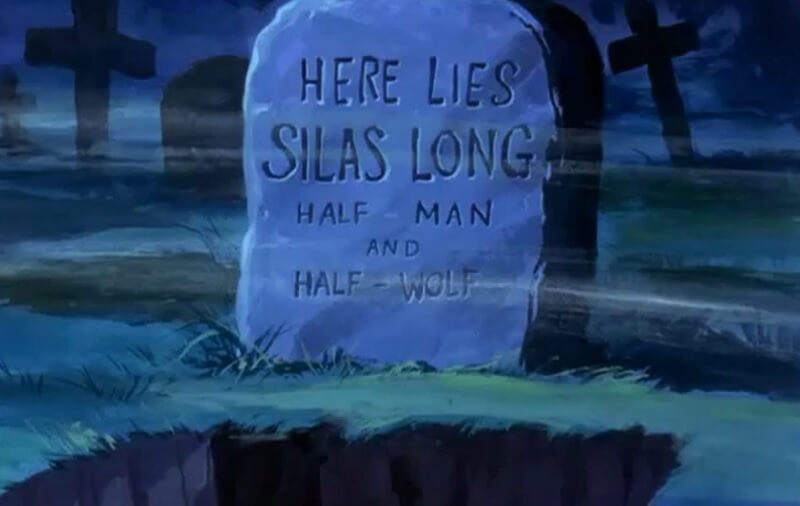 More tracks lead away from the grave and Shaggy remarks that it’s not just a werewolf they are up against, but a ghost of a werewolf. Much to his disappointment, the gang decide to follow the tracks once more which leads them to an old mill.

Looking inside, they discover the mill is abandoned and filthy with dust. Deciding to split up to cover more ground, Shaggy and Scooby are the first to confront the werewolf who is silently stalking them as they search around. As the werewolf is being stealthy, they never actually see him, and Shaggy triggers a trap door that launches the werewolf away. 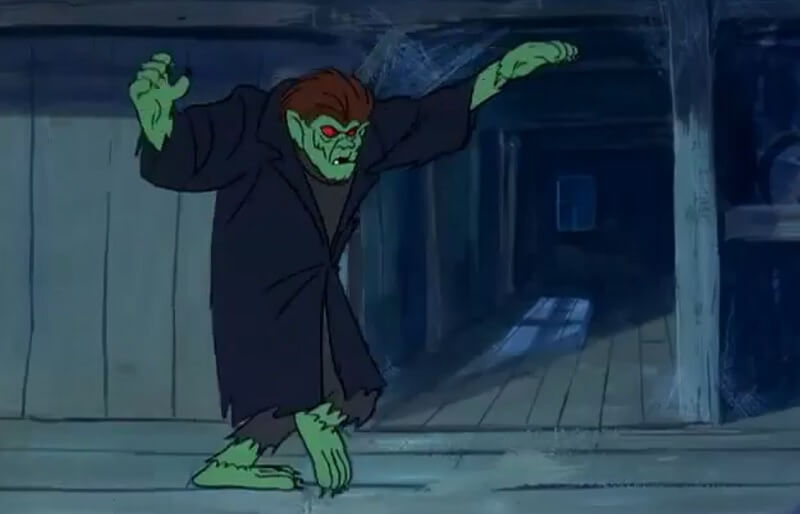 Meanwhile, Freddy, Daphne and Velma discover more tracks that stop at a wall. Freddy guesses there must be a secret entrance and they discover a secret room. Inside the room they find a map of the area with 3 xs on it, with one x saying mill. The werewolf pops into the room and frightens our trio so they run off where they once more run into Shaggy and Scooby.

A chase song emerges and we get several gags between the werewolf and Scooby and Shaggy. After the chase, Shaggy and Scooby end up covered in wool. The gang also find several empty barrels with rubber tubes sticking out of the top.

They hear the howl of the wolf once more, along with a rail cart that runs from the mill to a shipping dock. Freddy and the girls search for where the cart came from and Shaggy and Scooby run off to the boat.

Following the rail into the mill, Freddy, Daphne and Velma spot the werewolf but end up getting locked in a room by the werewolf

At the barge, Shaggy and Scooby run into the werewolf as well and use their normal master of disguise tricks to evade the hairy monster by giving him a haircut. It’s hilarious gag that continues to pay off as the werewolf has a nearly shaved head for the remainder of the episode. 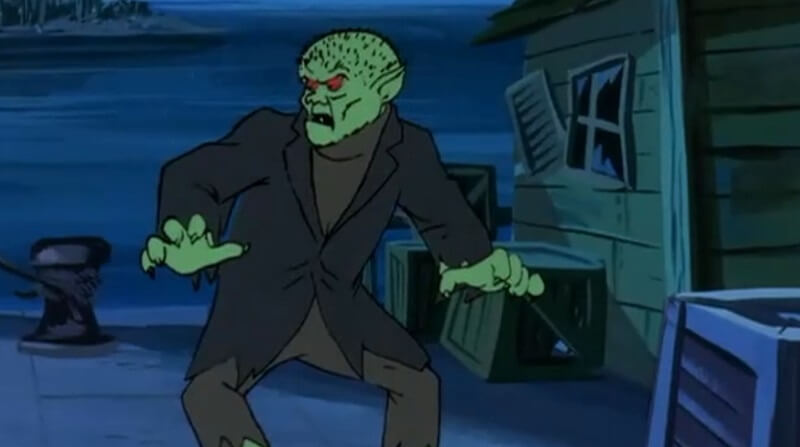 Eventually Scooby and Shag end up in an underground tunnel which leads them back to Velma, Daphne and Freddy.

The entire gang head back to the barge and discover a room full of barrels. There they find the werewolf pulling a barrel out of the water, and they hear a sheep bleating.

Velma and Freddy have now figured what’s going on so Freddy decides to set a trap. The trap does not go as expected, however, after an intense boat chase, the werewolf ends up stuck in a waterfall.

The sheriff shows up and explains the werewolf was a sheep rustler where they caught the sheep, sent them down the river in barrels, shaved them and then sold them on the black market. The ending is also rather anti-climatic, as there is no unmasking or surprise. 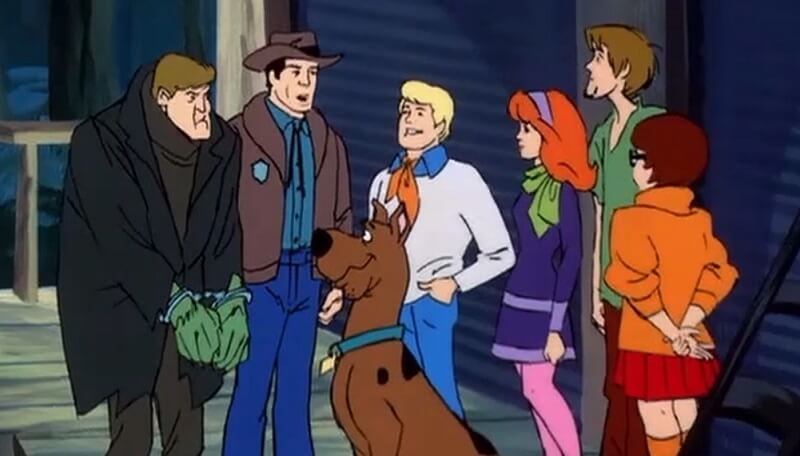 This was a frustrating episode for me as they set up the spooky atmosphere at the start but then the tone shifts to comedy pretty quick.

I did enjoy the start where the gang hear the howl of the wolf and see his beady red eyes in the trees. I also loved the way the werewolf silently stalked Scooby and Shaggy. The open grave was also cool!

The chase song and chase scene were fun, but after that, the episode loses its sense of mystery and spookiness for me. The fact that we get no unmasking was a bit of a drag, but I guess since they gang did not come across anyone else in the episode we had no suspects to begin with anyway.

Still, it’s an incredibly enjoyable episode, and I did appreciate the Sheep rustling side-plot and found that to be rather clever..

Scooby’s Night with a Frozen Fright