The Haunted Candy Factory is the 7th episode of the 2nd season of the New Scooby Doo movies and originally aired on October 20, 1973.

The episode sees the gang investigating a haunted Candy factory in which the owner, Cass Elliot has been trapped inside. Freeing up Cass Elliot, the gang are pursued by some mischievous green globs.

A wonderful performer and singer, Cass Elliot died far too soon at the age of 32 only 9 months after this episode premiered. My favourite performance of Cass Elliot was in the 1970 Pufnstuff film where she portrays a witch named Witch Hazel.

Very tragic she passed away so young, as with her amazing voice and talents she would have continued to have a phenomenal career.

I don’t have much else in the way of trivia, so let’s get on with the review.

The episode begins with the gang driving through a storm late at night. They are lost in a run down factory and stop in front of the Sugar Plum candy factory. A Cass Elliot’s Golden Caramel Bar is tossed at the Mystery Machine and Scooby takes a good bite of the candy bar only to hurt his teeth as they find a skeleton key inside with a note. 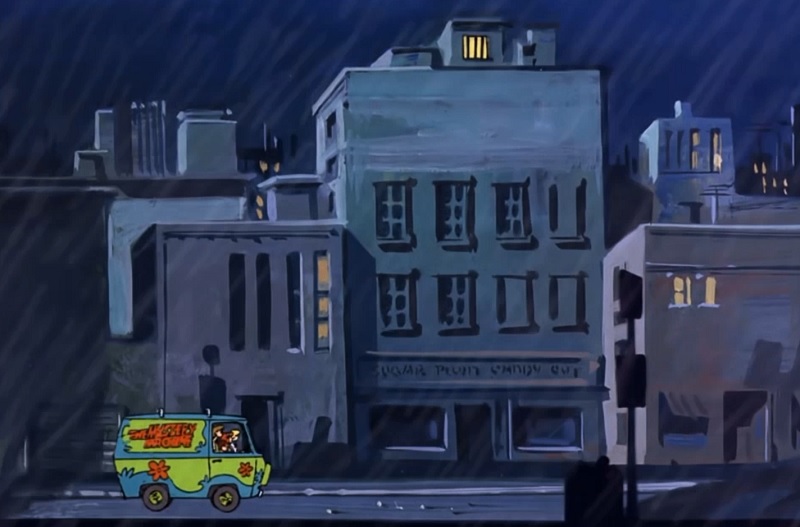 The note says, Help, I’m a prisoner in the Candy Factory. Cass Elliot. 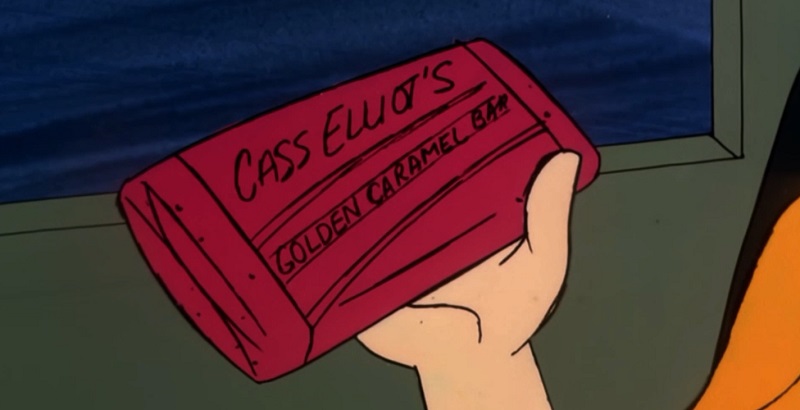 Cass then yells out of the upper window saying she’s being held prisoner until she hauled off. 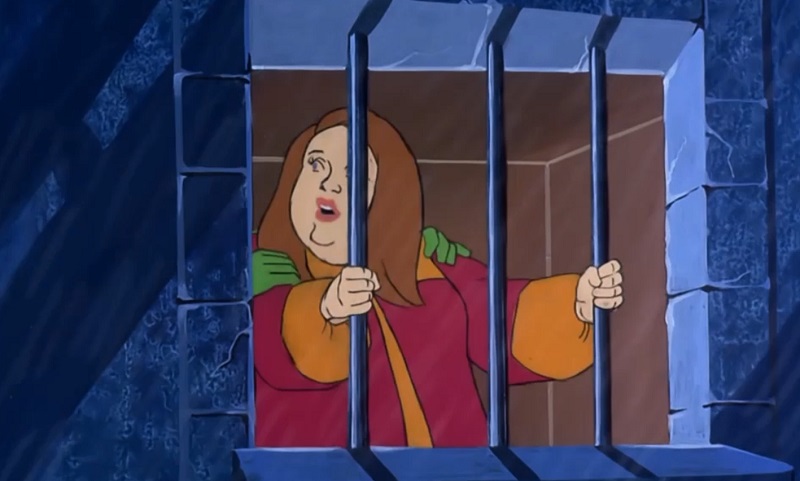 Freddy unlocks the Candy Factory door with the skeleton key and they find the inside quite eerie. We also see two mud like men, which I assume are covered in chocolate, float after the gang and demand that they depart. They then dip Shaggy in ginger candy and turn him into a ginger man statue which Scooby gets to promptly eating. Meanwhile Freddy, Daphne and Velma fall down a secret passage after the glob men throw a switch.

In the basement they find Cass Elliot who also fell through a trapdoor. They hear an electrical grinding noise that Cass Elliot says has been happening ever since she bought the place.

The gang reunite after Shaggy throws down some licorice to pull Cass, Freddy, Daphne and Velma out of the trap door. The gang hear the grinding noise once more and discover Mr. Crink – the foreman – locked in a storage closet by the glob men. Mr. Crink calls the building a ‘creep factory’ and quits on the spot.

With no staff, the gang volunteer to help run the factory. We also meet Mr. Franklin, the night watchman who has worked at the factory for 50 years. As he walks off, one of the green globs snatches Mr. Franklyn and disappears.

The gang hear a machine running and watch as the Green Globs start making candy. The gang investigates the candy and sees that the candy is being sent to 13 Avenida Del Sur – Rio de Janeiro in Brazil. 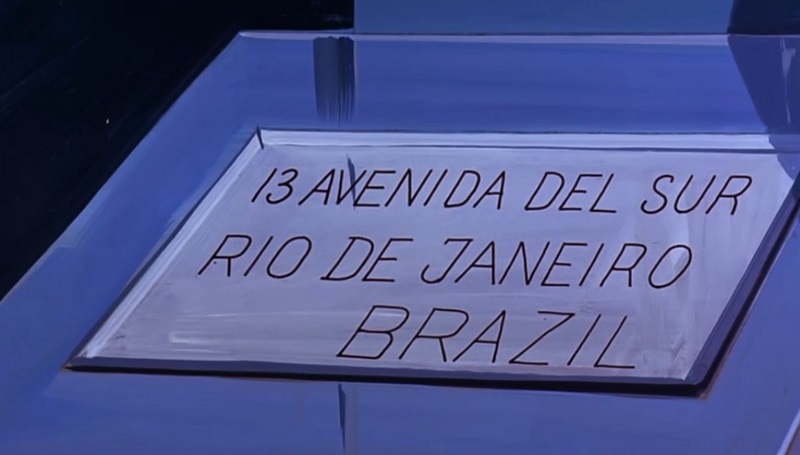 Finding this fishy, the gang split up to look for more clues and encounter several haunted hijinks involving the green globs, along with lots of fun with various pieces of candy like marshmallows, peanuts, bubble gum, and candy canes. 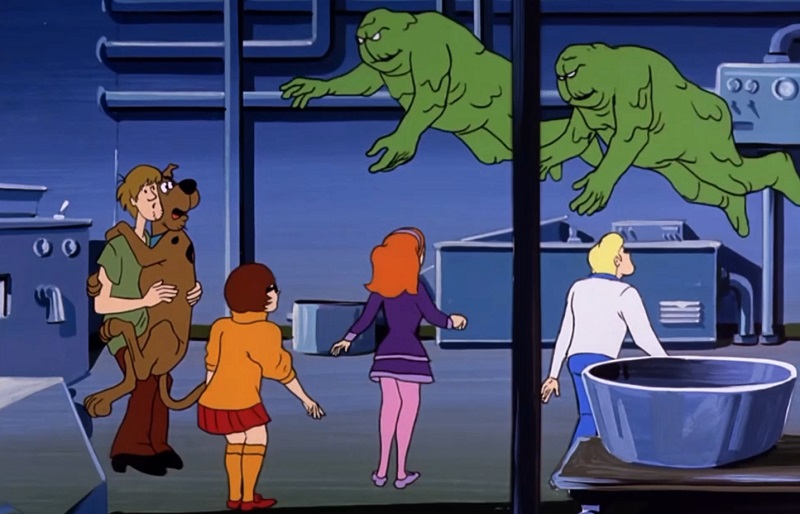 Shaggy, Scooby and Cass Eliot eventually find Mr. Franklin amidst a mountain of chocolate Easter bunnies. Mr. Franklin then chases after a green glob and tackles it. Unfortunately Mr. Franklyn is no match and is carried off once more.

Freddy and the girls find a candy machine that is labeled ACME Metal Grinding Machine. Turning it on, they once again hear the grinding noise. 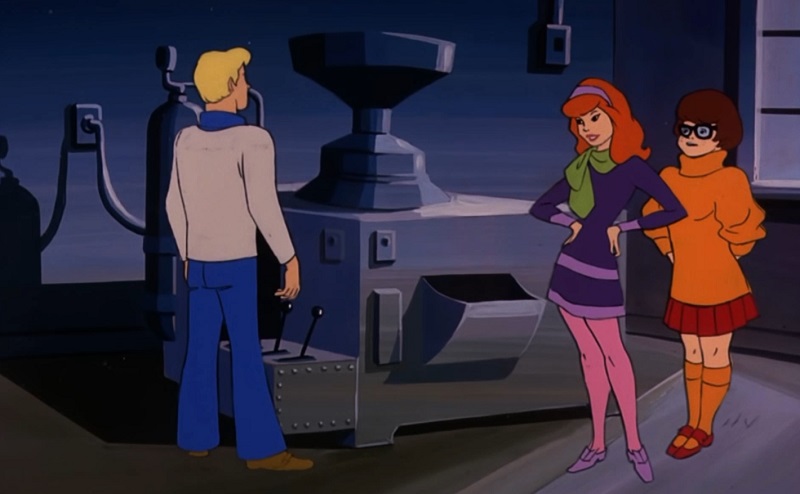 Freddy tosses the skeleton key in and the machine turns it into powder. Freddy also finds empty City Bank bags.

More chases occur and we get more haunted gags involving machinery and candy. Shaggy also accidentally turns himself into one of the green globs using a faulty Cotton Candy machine. Mistaken by one of the partners, Shaggy gets to work loading candy bars into a truck until Scooby licks all the candy off of Shaggy’s face. 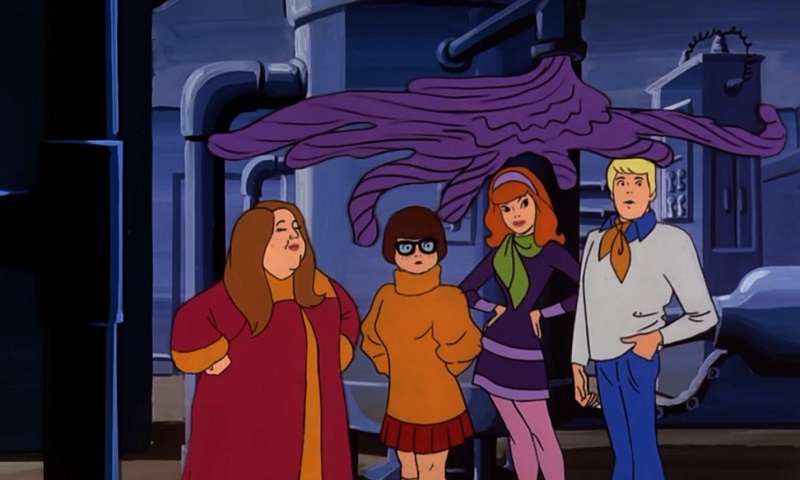 Outside, the green globs are loading up their truck that’s heading to Rio and they figure they have plenty of time to get away now that the gang are trapped. Using their heads, the gang free themselves by taking a bath in a tank of rock candy which washes the taffy up.

Fed up, Cass Eliot fires up a forklift and finally traps the green globs by hardening them in a mess of candy apple gunk and chocolate.

Detective Storm shows up and Freddy washes off the green globs we discover that it’s Mr. Crink the factory foreman and Mr. Franklin the night watchman. Velma removes the Mr. Franklyn mask and we learn it’s Sterling Smith and international gold smuggler. We learn he robbed a city bank last month of 2 million dollars worth of gold bricks.

Using the metal grinder they were pulverizing the gold, turning it into chocolate bars and shipping it across the border unnoticed. Seeing as Shaggy had already eaten a dozen or so of these candy bars, he probably has a few grand worth of gold in him.

With another mystery solved, the gang along with Cass Elliot, Detective Storm, and Mr. Franklyn sit down to a celebratory meal.

The atmosphere is a lot of fun with a haunted candy factory, however I felt the ‘weight jokes’ aimed towards Cass Elliot were lame and cheap.

The two green globs also looked ‘meh’ and weren’t all that scary looking or intimidating. Had they spent more time on their design, this episode would have been far cooler.

Cass Elliot does make for a fun guest star, and her performance elevates this episode. She merges perfectly with the gang and adds for a lot of fun. The mystery in this was also decent and I enjoyed the plot.

Thanks for watching, along with any comments, views, likes and subscribes. I always enjoy reading your comments. And if you disagree, or agree with my review, I always like to hear why.

Next week I will be covering the final episode called the The Haunted Carnival, until then, Stay Spooky!

A Tiki Scare is No Fair