Nowhere to Hyde is the 1st episode of the second season of Scooby-Doo, Where Are You! and originally aired on September 12, 1970.  This is the first episode to introduce us to the chase scene song sequence, and in this episode we get the tune “Recipe for My Love”, performed by George A Robertson, Jr.

We also get a new opening and credit scene with new clips from this season, along with George A Robertson, Jr. singing the theme song, replacing Larry Marks.  Heather North also joins the cast as Daphne, replacing Stefanianna Christopherson.

The plot of this episode sees the gang encountering the Ghost of Mr. Hyde, and has several twists and turns kicking off season two with a bang.

The episode begins with a mysterious, and not so handsome looking, man robbing a jewellery store in a high-rise building.  There he steals a rare necklace, before climbing down to the ground.  It’s almost as if he wants to be seen, as he lets out a sinister laugh, allowing a security guard to call for backup.

In order to evade the police, the ghost of Mr. Hyde runs past the malt shop and slips into the back of the Mystery Machine.

Inside the Malt Shop, the gang are enjoying some ice cream sundaes after a fun night at a magic show held at their high school.  When it’s time to head home, they climb into the Mystery Machine, and are completely oblivious to their unwanted guest who is hiding under a beach blanket.

Shaggy is excited to get home and watch ‘I was a teenage blob’, which Velma calls corny.  She felt the way the blob hid in the back of teenager’s cars for his victims was unrealistic. 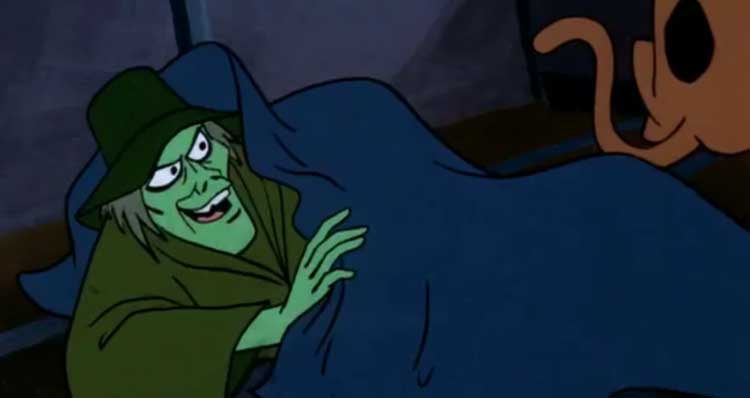 Daphne and Shaggy have the chills, and Freddy explains that the Mystery Machine’s heater is broken.  Velma asks for Scooby to fetch the beach blanket and which leads to Scooby getting a closeup look at Mr. Hyde.  Scooby tosses the blanket back on to the ghost and tells the gang, who naturally, don’t believe him.

Mr. Hyde stands up and Freddy stops the Mystery Machine so they all can run out.  Hiding behind the a rotting log, they watch as Mr. Hyde runs into the evening mist.

Velma recognizes him as the Ghost of Mr. Hyde, the creepy jewel thief who has been scaring everyone in town.  The gang decide to follow Mr. Hyde and watch him go inside a spooky looking house.  The gang plan on slipping into the backdoor of the house, however, upon opening it, a trap door opens and drops them into a basement room.

The room turns out to be a dusty old science laboratory, where they meet Dr. Jekyll.  Relieved he’s not Mr. Hyde, the gang are happy to see him, however Dr. Jekyll explains that he fears he might have turned into the sinister ghost, like his grandfather did before him.

A week prior,  Dr. Jekyll had been testing out a new vitamin formula that you only had to take once in your life.  Something went wrong and he passed out.  When he regained consciousness, his housekeeper, Helga, re-awakened him, and Dr. Jekyll had noticed that his feet were covered in mud from being out in the marsh. 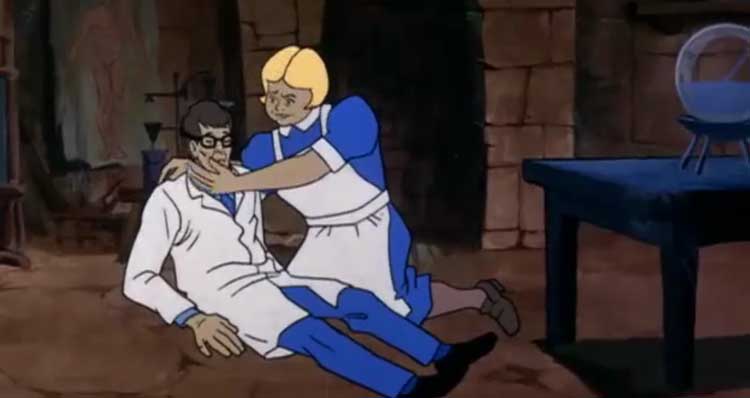 The same thing happened to Dr. Jekyll tonight, but this time, he found the jewels Mr. Hyde had stolen in his pocket.

Velma notices that the mud on Dr. Jekyll’s boots are dry, meaning he couldn’t have just come in from the swamp.  As this is incredibly strange, Freddy decides to split up and search the mansion for clues.

In the living room, Freddy has found an old newspaper clipping half burnt in the fireplace.  The article is about Helga the Great, a famous trapeze artist who can scale high buildings as the human fly.  Velma finds it fishy that a former circus star is in the backwoods swamps working as a housekeeper. 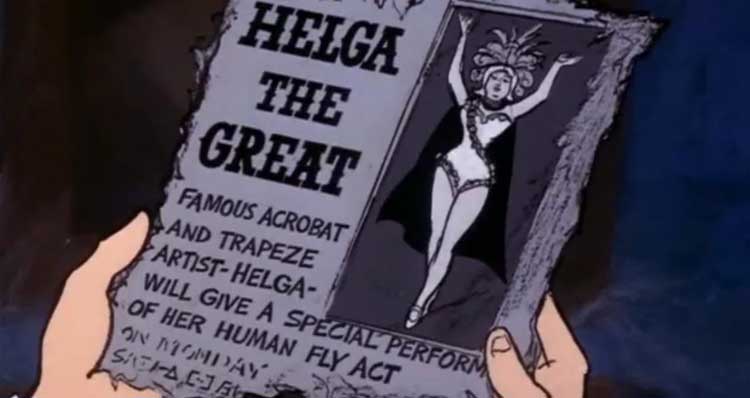 In the library, Shaggy pulls out a book called 101 Ghosts and Ghouls off the shelf.  In its place, the head of Mr. Hyde emerges and laughs his evil laugh.  A small but comical chase scene occurs and Scooby and Shaggy end up sliding down a stair railing, and crashing into Velma.  From there they end up sliding down a laundry chute, and land back in the basement. 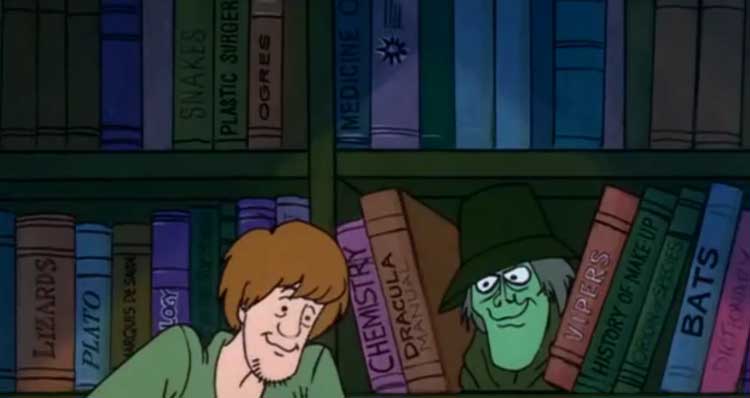 Here they find another clue, a feather duster, just like the one Helga was using to dust the attic.  The feather duster is sitting on top of some muddy shoes.  Suspicious, Velma decides to head up to Helga\’s room to search for more clues.

The entire gang are now in Helga’s room and find a bottle of knockout drops and a can of glow-in-the-dark paint underneath her mattress.  In a fruit bowl outside, Shaggy yells out that he’s found another clue, but he is snatched away by Mr. Hyde before he can reveal what he’s found.

Tied up in the basement, the Ghost of Mr. Hyde is formulating a concoction to turn Shaggy into a frog.  Scooby rushes into the lab to rescue Shaggy, and our chase scene throughout the house and marshes outside occurs.  When the chase is over, Shaggy reveals that he has found four suction cups in the fruit bowl.

Convinced the villain is Helga, the gang create their own trap, using similar costumes and masks that Mr. Hyde is wearing.  The trap works and they catch Mr. Hyde in an old mattress. 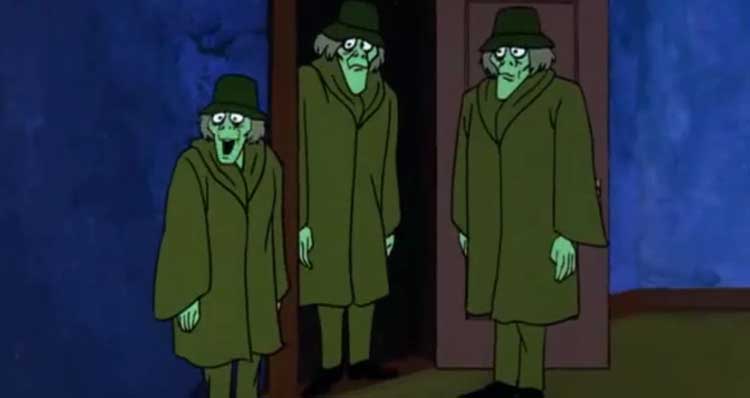 Daphne Unmasks Mr. Hyde, and it turns out to be Dr. Jekyll.  Calling in the sheriff, the plot is revealed that Dr. Jekyll turned to a life of crime as all his experiments had failed.  In is latest swindle, he had not expected the gang to follow him through the swamp.  With some quick thinking, however, he decided to frame Helga with his fake clues. 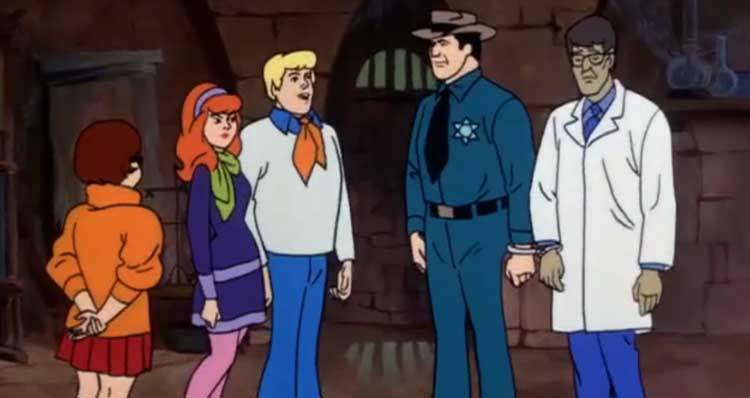 The plan almost worked,  except the suction cups would have eventually gave him away.  Since Helga was an ex-circus star she never would have ever needed them.

I give this episode a 8.5 out of 10. It has everything I want in a Scooby-Doo episode with a creepy looking villain, and a spooky house filled with traps. However, I also found it had some rough spots, particularly in the story-telling.

My favourite part has to be the trap scene where the gang dresses up like Mr. Hyde. I remember seeing this as a kid, and being just as terrified as Dr. Jekyll was, and thus, I boosted up my score. Even though the trap plays more for laughs, there is something chilling in seeing Velma, Daphne and Freddy dressed up as ghouls.

The way Mr. Hyde grabs Shaggy is also freaky and brings him down to the basement is also a bit scary. Yet, I’m not entirely sure of Dr. Jekyll’s motive as he has Shaggy tied up and could have easily taken the suction cups away from him.

The opening scene where Hyde robs the jewellery store, and then having Mr. Hyde slip into the Mystery Machine was also cool.   Watching that scene pay off was a lot of fun.

That library scene, where Hyde’s face pokes out of the books, is fantastic as well!

My biggest complaint is that there wasn’t much for Freddy, Velma and Daphne to do in this episode and their personalities don’t shine through.  Most of the good gags were given to Shaggy and Scooby.

While Mr. Hyde is creepy, I feel they could have had a lot more fun with his design.  Sure, if I saw this dude in the back of my van, I’d be a little terrified, but in terms of Scooby-Doo villains, he\’s generic.  Basically you have a guy with a green face in a bucket hat.

However, the bucket hat makes for a recognizable profile in that you see Hyde’s shadow in many scenes before he shows up.

Finally, I’m not sure why Dr. Jekyll has to be the Ghost of Mr. Hyde and not just his own version of Mr. Hyde. This ‘ghost of’ is a common complaint of mine with most episodes. Perhaps they do this to keep it kid friendly or avoid lawsuits.

Overall, it’s an above average episode, with some nice twists to keep us guessing.