Scooby’s Night with a Frozen Fright originally aired on October 3, 1970 and is episode #4 or Season 2 of Scooby-Doo, Where Are You!

This episode features the gang encountering a caveman, frozen in time, who thaws out only to terrorize the gang into solving a new mystery. This is also the first episode where the phrase “Meddling Kids” is used, so it is rather historic!

If you’d like to own this episode, it’s available on both Blu-ray and DVD.

The episode opens up during a wild storm at sea where a boat is transporting a caveman frozen in a block of ice.  The heavy waves get the best of the boat, and knocks the caveman out to sea. 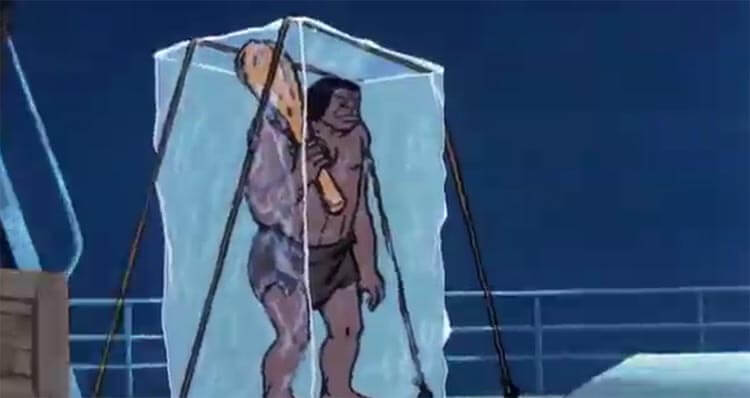 Back on the beach, during the day, the gang are kicking it up during an intimate beach party.  Freddy and Daphne are dancing, while Velma looks on.  Shaggy and Scooby are fishing off the beach, and while they’ve had no luck pulling in any fish, Shaggy manages to reel in this block Neanderthal ice.

Velma remembers reading about this lost 2 million year old caveman in the newspaper.  The researchers were planning on bringing it to the Oceanland aquarium.  So the gang load up the Mystery Machine with the frozen fright and haul to the local aquarium.

At the Aquarium, Professor Wayne and Professor Ingstrom are very appreciative to have gotten their specimen back before he thawed out.

Professor Wayne shoves the Caveman in the Arctic room which is chilled by a freezer.  Professor Ingstrom, meanwhile, daydreams out loud of how he’d love to bring the Caveman back to life. This creeps out the gang, so they dash off.

We then cut to the Arctic room freezer where a mysterious hand turns on a space heater that begins melting the Caveman’s ice. 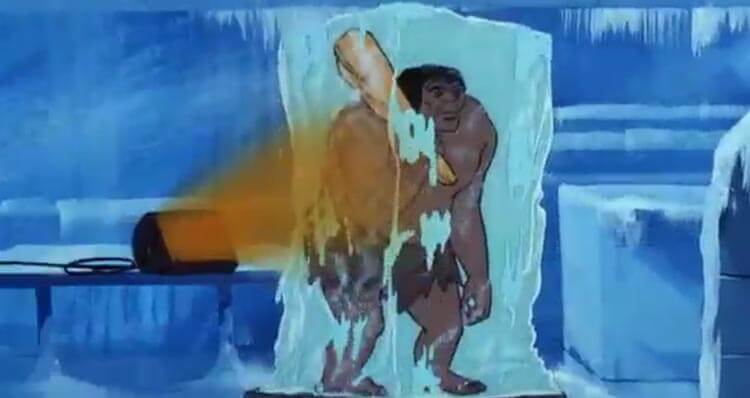 At the Malt Shop, Shaggy realizes that he forget his fishing rod at Oceanland. So the gang head to the aquarium to retrieve it. There they find the freezer door has been ripped off its hinges. Inside the freezer room, they find Professor Wayne\’s winter coat torn up, and the phone lines cut. Even worse, the Caveman that was kept chilled inside it had been thawed out and is now missing.

The gang follow the Caveman’s giant footprints to a nearby dock where they find Professor Ingstrom using a strange machine. It appears that he is talking to a porpoise. Sneaking up to get a better look, the gang frighten Professor Ingstrom into a nearby bait shack. However, when the gang attempt to enter the shack, they discover the angry Caveman. 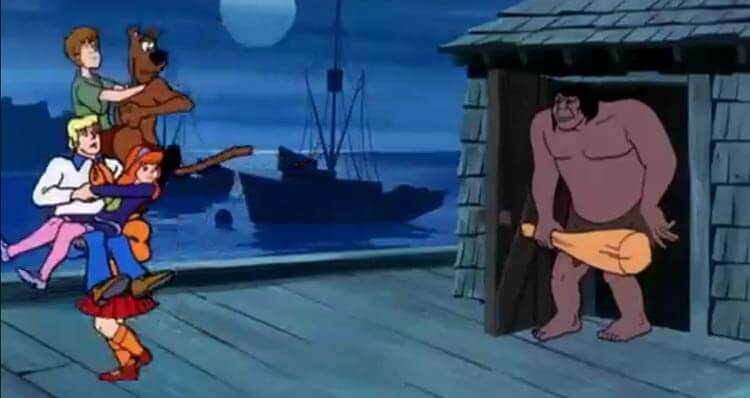 The angry Caveman chases the gang throughout Oceanland until they escape. At this point, Velma finds a map showing the currents of Oceanland. On the map is also an X, so Freddy voluntells Shaggy, Scooby and Velma to hop into a rowboat to check it out. 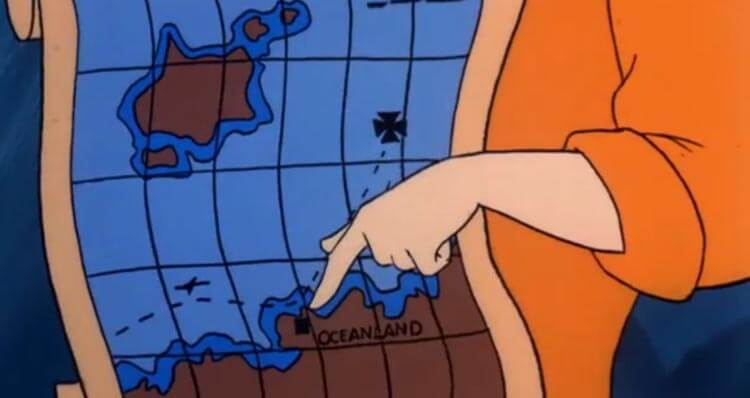 At the X location, Shaggy, Velma and Scooby find a fishing boat. Boarding the boat, they get locked inside a room and nearly get killed by an ice machine spitting out huge blocks of bone crushing ice. After escaping, they find their rowboat wrecked, so they paddle back to shore on an ice block.

Freddy plans his trap, and they eventually catch the Caveman with the help of a giant clam.  The entire trap scene takes place during a fun song called ‘Seven Days a Week” and it’s a lot of fun to watch.

It turns out it is Professor Wayne. The professor had heard about the loss of Arctic caveman and made his own with the intent of letting it drift down to Oceanland.  That’s why we had a fishing boat in this episode with a giant block of ice maker on board.  It\’s what Professor Wayne used to create the fake caveman, and he also pushed the caveman off the fishing boat so the current would take the block of ice right to Oceanland.

There he had plans for it to thaw out and pretend that it had killed Professor Ingstrom. At this point, he would claim he escaped from the Caveman, and steal Professor Ingstrom’s marine life communicating machine as his own to make millions. Since Professor Wayne staged a fake caveman, I guess this means that somewhere out there, there’s still a frozen caveman floating around in the Pacific ocean!

The nighttime aquarium setting is fun, and the Caveman looks cool, it’s just that the Caveman doesn’t have much in terms of personality.  All he can really do is growl and act brutish.

I do remember loving this episode as a kid, probably because of my fascination with Cavemen at the time.   As an adult I found this episode to be fun, but average.  However, average Scooby-Doo is still fantastic watching, and I look forward to watching this one again.