The Lochness Mess is the final episode of Season 1 of the New Scooby-Doo Movies and originally aired on December 23, 1972. And man, is this once ever a Christmas miracle, as I feel like it’s the best episode yet.

In this episode, the gang meet up with the Globetrotters for a second time (the first being in the Ghostly Creep from the Deep), and together they visit Shaggy’s Uncle Nathaniel for some relaxation time near Boston. Unfortunately Uncle Nat is being plagued by some ghosts of the past, as well as a sea serpent.

For some trivia, we get Shaggy actually driving the Mystery Machine for once and we also see Shaggy at 3 years old, as well as Scooby at 3 months old, which is rather cool.

The episode begins with the gang in the Mystery Machine on their way to Shaggy’s great Uncle’s place from Boston. Daphne and Freddy were impressed with the historical sites of Boston, while Shaggy misses the pizza.

On their travels, the gang come across the Harlem Globetrotters and they all sit down to a BBQ picnic in the middle of nowhere. 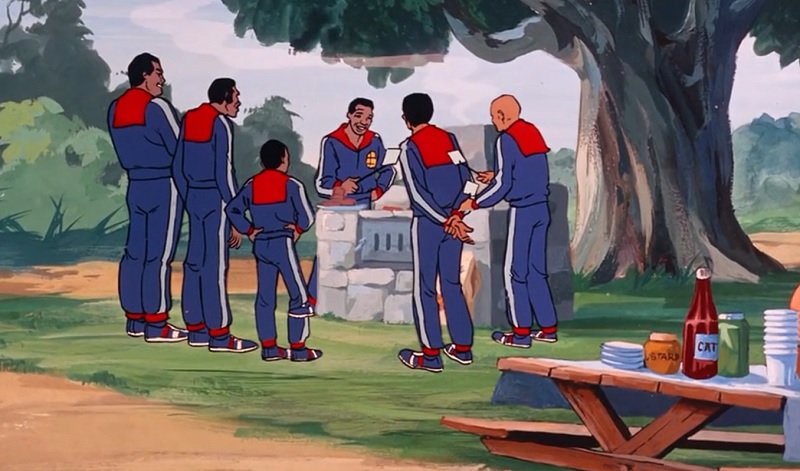 The globetrotters are looking for some peace and quiet so Shaggy invites them to his uncle Nathaniel’s place to relax. Shaggy’s Uncle’s place has 75 rooms, so it’s no problem. 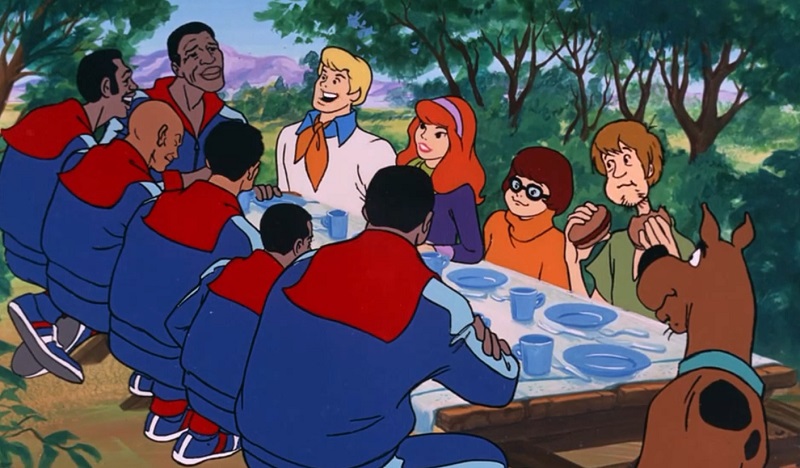 As the gang drive off with the globetrotters, a sea serpent emerges from the lake and watches them drive off. 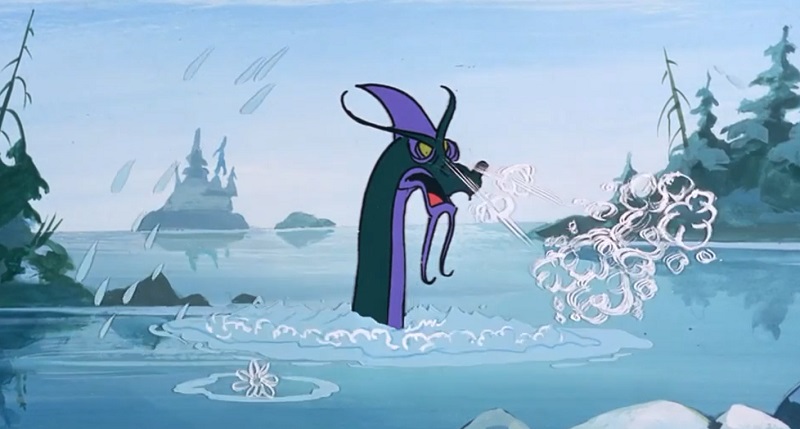 Freddy and Daphne hang out in the Globetrotter bus, while Shaggy drives the Mystery Machine as Shaggy’s the only one who knows the way to his Uncle’s place.

It’s now night time and Shaggy and the gang see a ghost in the middle of the road. The ghost warns them to ‘go away’ claiming to be a ghost of the past who roams these paths. The ghost then vanishes as quickly as he appeared. 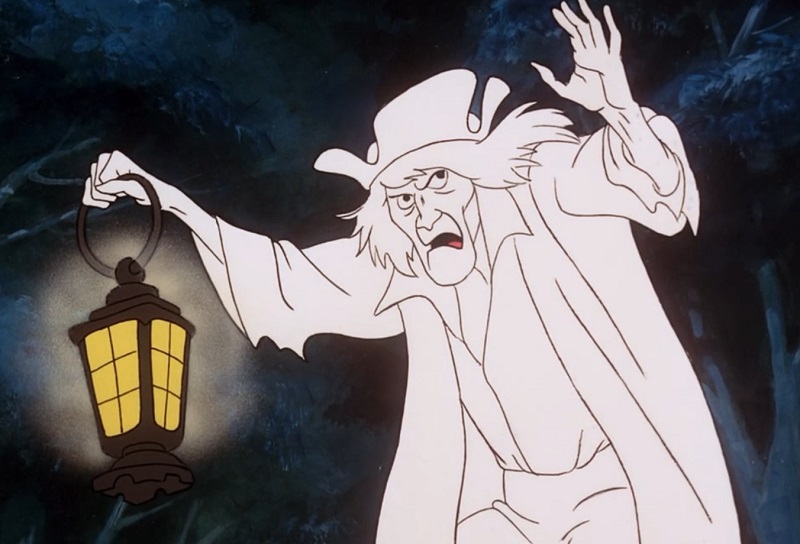 Shaggy drives off in a hurry and spots another ghost which causes him to crash through a fence. The Harlem Globetrotters in their bus have trouble keeping up, as Shaggy heads towards a bridge that is closed. Shaggy miraculously makes it through the bridge, and then Velma notices that the Bridge looks solid as a rock.

While looking at the bridge the gang come across Uncle Nathaniel who built the bridge 6 months ago. Uncle Nat is happy to meet everyone and brings everyone back to the house for a snack.

Uncle Nat explains lots of weird things are happening, and whoever put the ‘bridge out’ sign was not him.

Shaggy and Scooby tour the house and Shaggy looks at all his family portraits on his walls and in the old family photo album. We also catch a glimpse of Scooby at 3 months old. 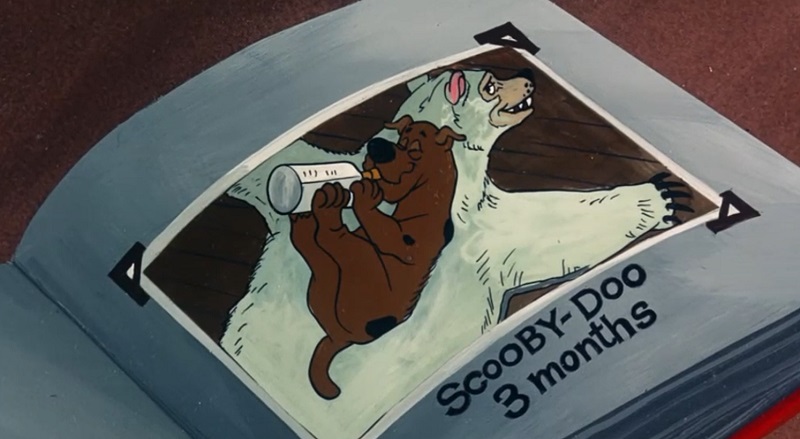 While everyone is asleep, a ghost on a horse pretending to be Paul Revere drives past the house yelling out ‘danger, danger, the British are coming, leave at once’ This wakes everyone up and Freddy thinks it might be one big joke.

Uncle Nat is very unsettled by ghosts and hasn’t had a goodnight sleep in weeks.

Scooby and Shaggy have the misfortune of standing guard and comes across the first ghost in the house. As the ghosts laugh, the groups get separated. One of the globetrotters triggers a trap door on a bookshelf and they find one of the ghosts who once more takes chase.

Soon everyone ends up in the kitchen where Uncle Nat is cooking with a stack of pancakes. Since it’s now day time, the gang and the globetrotters plan on heading down to a nearby cove to do some scuba diving and fishing.

Uncle Nat warns them of the Sea Serpent, and to just keep their eye out for it.

The gang try to rent a boat, however, the owner tells them that they are closed, despite the sign saying that they are open. The gang say they’re going to complain and talk to the police about this, so the owner reluctantly agrees to rent them some boats.

Out on the water, the globetrotters waterski, while the boat rental owners and the foreman Morgan calls them idiots as he doesn’t want anyone around. Morgan then plans on messing up their scuba gear so they’ll leave.

At the bottom of the cove, Scooby and a few of the globetrotters spot a sunken boat. As they get near it, the sea serpent approaches and scares them off.

Back at Uncle Nat’s place, Uncle Nat said he’s almost ready to sell his property to the boat shop owners (who we learn are named Winslow and Selby). Uncle Nat says he’s too stubborn to move, but is getting tired of these ghosts.

Freddy is suspicious, so everyone heads down to the cove at night to see if there is a connection between the ghosts and the sea serpent.

Freddy, Shaggy, Scooby and two globe trotters hop in boat and take it out to search for the sea serpent. The remaining globetrotters and the girls stay on land where they are soon chased by two ghosts.

The girls and company end up at an old shack where a chase takes place. Ending back up at the boat rental building, Velma has an idea on how to hide.

Out in the water, Freddy is ready to give up as they’ve been out on the water for an hour. Just as soon as they are ready to head back in, the sea serpent shows up and takes chase. Trying to swamp the boat, Scooby mistakenly ends up on the sea monster and pictures it with his claws. Turns out the serpent is a hot air balloon. 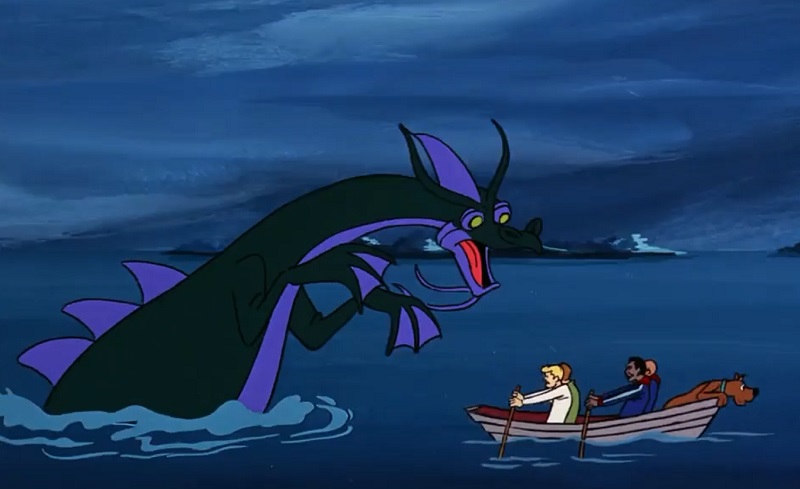 As the sea monster flies about in the sky, he knocks two of the ghosts in the water who turn out to be Winslow and Selby. The ghost of Paul Revere is still out there, and Curly takes him out with a basketball.

Unmasking Paul Revere, it turns out to be Morgan. Winslow and Selby claimed they were forced to go out and scare everyone due to Morgan’s bullying. Morgan found an old sunken treasure ship in the cove and didn’t want anyone to get all the gold.

Uncle Nat laughs at this and claims the old boat is a dummy ship from an old movie. The gold inside was phony and just a prop.

I give this episode a 9 out of 10. This is the best episode for me so far as it has an excellent script with a lot of spookiness and a good plot. This one actually felt like a short movie as it was paced well, and had a lot of fun scenes to keep me entertained

Uncle Nat was a joy, and Shaggy looking through his family portrait was a lot of fun.

The ghosts were rather meh, and not that memorable, and I think this would have been a perfect 10 out of 10 if they just focused on the sea monster.

I also wish they spent more time introducing the globetrotters. I know when this episode aired, the globetrotter television series had wrapped up, so it was expected viewers already knew who was who. But watching this 49 years later only Curly and Meadowlark are really mentioned.

Despite my complaints, I certainly wish all the New Scooby-Doo Movies were of this quality as this felt like a mini-movie.

So until next week, Stay Spooky.