The Secret of Shark Island guest stars Sonny& Cher and originally aired on October 28, 1972. It sees the gang, along with Sonny and Cher, solving a mystery at an old run-down beach resort, involving a Shark God (a walking Shark) and his shark henchmen.

For those of you who don’t know, Sonny & Cher were a popular comedy/singing act in the late 60s and 70s who were married in real life. They had a huge hit with the song ‘I got you babe’ and ‘the beat goes on’, as well as a variety show that ran for a few seasons. They divorced in 1975, and Sonny Bono passed away in 1998 during a skiing accident. Cher, meanwhile, has had a huge career in both acting and singing.

The episode begins with the gang heading off on a surfing trip. Unfortunately, as they near the beach, a thunderstorm has put a damper on their plans.

They do, however, spot Sonny and Cher broke down with a flat tire on the side of the road. Sonny & Cher have plans to visit the Hideaway Hotel beach resort for their second honeymoon, so the gang offer to drive them there. 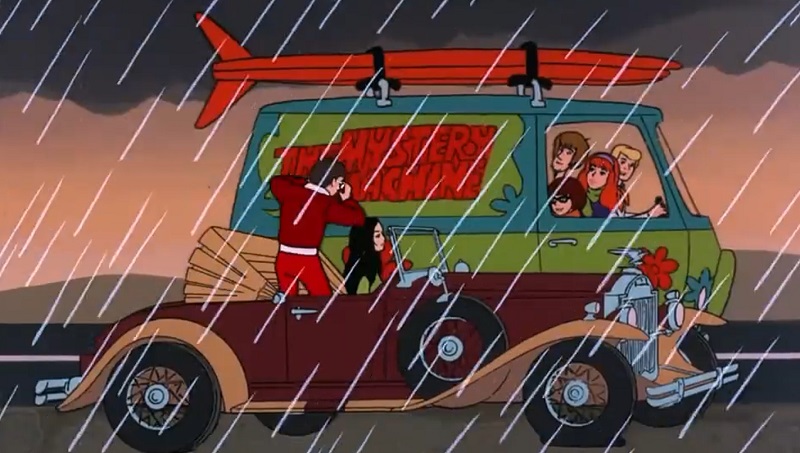 On the way in, the gang are spied upon by a mysterious figure in a raincoat who makes demonic guttural noises into a walkie talkie. The Mystery Machine is also nearly driven off the road from a Rapid Trash Removal truck. Freddy and Sonny find this truck suspicious as he was driving like a road hog, and the fact that nobody would ever need to have their trash removed fast.

At the beach resort, the gang notice that its glory years are far from over. The championship golf course is a field of weeds, the porch is dilapidated, the tennis courts went into the ocean due to a rockslide, and vultures have made a nest on the roof. To make matters worse, the gang is stranded on the island resort for a couple of nights due to the tide flooding the bridge.

Inside, they meet the Hotel Manager – Milo Meekly, who is slightly deaf and blind. The confused Milo thinks the gang are Sonny & Cher’s kids, and Scooby & Shaggy are twins. 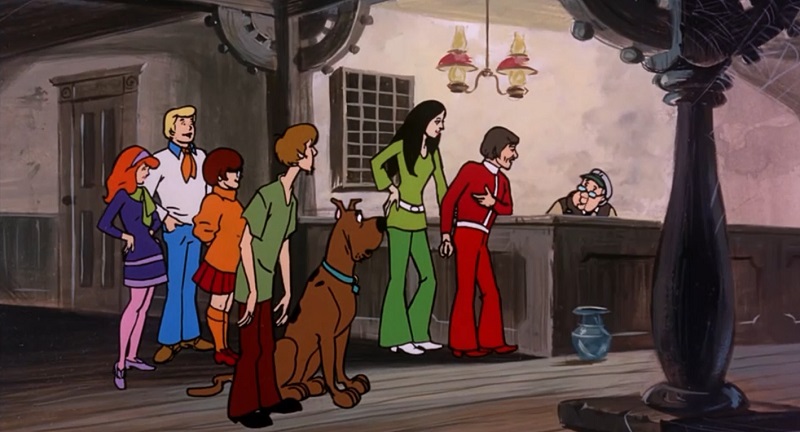 They also meet Matilda, whose handsome looks and manly figure is rather imposing.

We learn that Sonny’s agent recommended the Hotel to him, as the agent stayed there 15 years ago. Milo tells Sonny that ownership of the place has changed hands at least six times in the intern. The good news is that the bridal suite is still available, and has a nice view of the rocks in the ocean due to the porch falling off.

Milo also informs them about an ancient Native American curse of the ‘Fish of the Devil’, aka ‘Pescado Diabolico’ or the Evil God of Sharks. The curse is that one night, when the sea winds moan, the shark god will walk upon the land, and all the sharks will follow, driving humankind back into the ocean. As if on cue, the gang hears a strange moaning, which Milo writes off as their youthful imagination.

During the evening, Daphne sees something come out of the ocean during a lightning storm. Velma teases her as she thinks Daphne is just spooked out from the stories Milo told them earlier, but in the next flash of lightning, she sees it too!

The next morning, Freddy and Sonny find dozens of empty valuable rum bottles belonging to an ancient Spanish King on the beach. Listening to the wind blowing across them, it sounds like the moaning they heard the night before.

Scooby and Shaggy find a paddle boat with a glass floor. Taking it out in the ocean, they spot an old shipwrecked Spanish Galleon, along with the Shark God swimming out of it.

The Shark God swims up, startling Shaggy, and he ends up crashing the paddle boat on the beach. There they meet up with the rest of the gang along with Sonny and Cher. On the beach, they spot a Kelp Dredger, which they try to signal. However, the boat vanishes completely into thin air.

The gang try to hunt down Mr. Meekly, but find him missing. Some slimy amphibian-like footprints circle his desk.

Splitting up, Shaggy runs into the Shark God in the Hotel’s wine cellar. A chase ensues, and Shaggy, Scooby, Sonny & Cher all manage to escape his man-eating jaws. 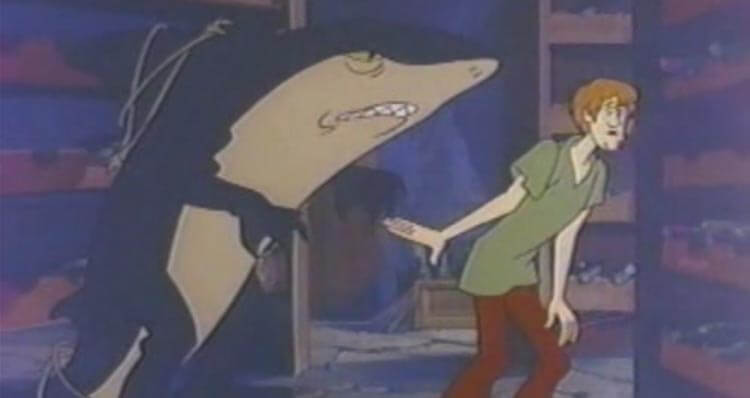 On the beach, Freddy, Daphne & Velma have worse luck as a rickety set of wooden stairs they are on collapses into the sea. The 3 of them land dead center in the middle of a few circling shark fins. Freddy soon figures out, however, that these are fake fins on some sort of underwater device.

Eventually, everyone converges in an underwater cave where they find a crane aboard the kelp dredger operating a bucket that is harvesting piles of gold from the sea. The gold is being loaded on an assembly line and melted in a foundry. Freddy also discovers wet black paint on dozens of metal garbage cans and thinks it is some sort of clue.

The Shark God, along with a couple of other walking sharks, show up, and more chasing around happens until Freddy makes his way up to the top of the crane. There he spots Mr. Meekly operating the crane. Using two metal trash can lids, Freddy smashes them together like cymbals, disrupting Mr. Meekly’s senses.

Matilda rushes in, and it turns out to be an undercover officer named Matt Hidalgo. Matt Hildago arrests Mr. Meekly and his crew of walking sharks. 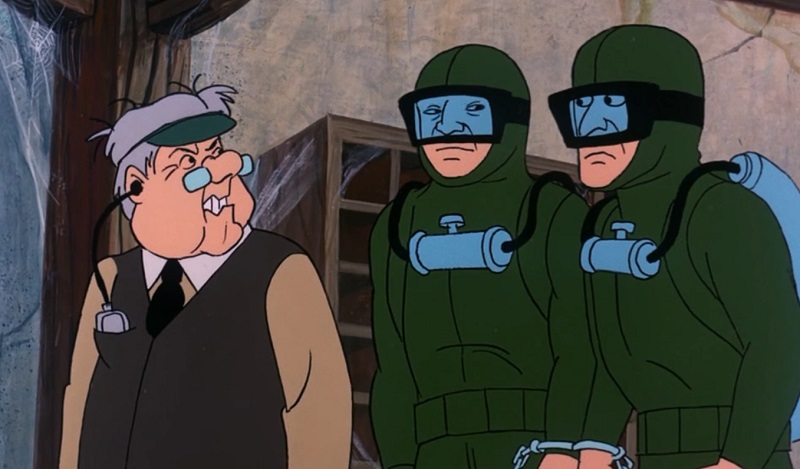 Back at the Hotel, Matt Hidalgo explains that all of the sharks were professional scavengers. They were stealing gold from the sunken ship using the Kelp Dredger bucket. From there, they melted the gold down and forged it into garbage cans, which they smuggled out under the guise of the ‘Fast Trash Removal’ business

The shark costumes were perfect for hiding their scuba gear when they needed to dive down to the wreck. The shark god legend was also helpful in keeping any legit customers away.

With another mystery solved, the gang begin to leave, just as the entire Hotel slides into the ocean for good.

A few of the jokes in this one are rather dated, but I enjoyed the corny banter between Sonny & Cher. I also liked the reveal that the deaf and blind Mr. Meekly was a bitter and savage Scavenger.

Matilda being an undercover agent, was a funny twist. It was clear from the start that she was a man, and the way Matt Hidalgo threw his heart and soul into acting like a maid was pretty funny.

The Shark-God design was super cool! It looked scary, and this episode came out a couple years before Jaws, so that makes it even more interesting as a villain. I liked the added touch of Kelp being on the Shark God’s fins.

The Hotel had some interesting set pieces with the treacherous cliffside views, hidden caves, and creepy wine cellar. This keeps things brisk and moving along at a quick pace.

Out of all the New Scooby-Doo Movies that I have watched so far, this one is the best. My only complaint is that at 40 minutes, it does run too long. Chop this episode down to 22 minutes, and you have a masterpiece.