Ghastly Ghost Town is the first episode of The New Scooby-Doo Movies and originally aired on September 9, 1972. This series saw the gang in a one hour television block where they’d have adventures with a celebrity.

This episode stars the Three Stooges, but are not voiced by the men who played them as they had retired by then. The Three Stooges was an American Vaudeville and comedy act from the 30’s to 70s, and the core stooges were Larry, Curly and Moe.

A fun fact, Amos Crunch is voiced by Ted Knight who was brilliant on the Mary Tyler Moore show. However, my favourite role of his was as the Judge in Caddyshack.

I’m not a big fan of this series, but I’m hoping I enjoy these episodes. Will this episode change my mind about the series? Let’s find out.

The episode begins with the gang getting lost near a ghost town during the night as a thunderstorm happens. On the road they see a sign that says Monsters Ahead which scares the heck out of Scooby. In between lightning bolts, Shaggy claims to see strange animals such as an alligator, a camel and an ape. Another sign promises monster ahead, but Velma soothes Scooby’s fear by saying the monster is most likely to be a tiny lizard.

On the road they see a giant bat driving at them which causes Freddy to crash the Mystery Machine into a sand dune where they get stuck. Walking towards the Ghost Town, they seek out help.

The gang then spot a dinosaur, an alligator, a camel, and an ape before they meet up with the Three Stooges who run after and capture the ape. The gang ask for help, and the 3 Stooges promise to give them a hand after they get the animals back in their cages.

At the Three Stooges amusement park, the 3 stooges complain that someone lets the animals loose at night. Velma blames the giant bat they saw earlier. The stooges then go one to explain lots of other weird things are happening, and the sheriff has made them close down the amusement park. To make matters even worse, the dinosaur keeps growling which is annoying loud and also shakes the old buildings. Unfortunately the stooges have no idea to turn off the growls. 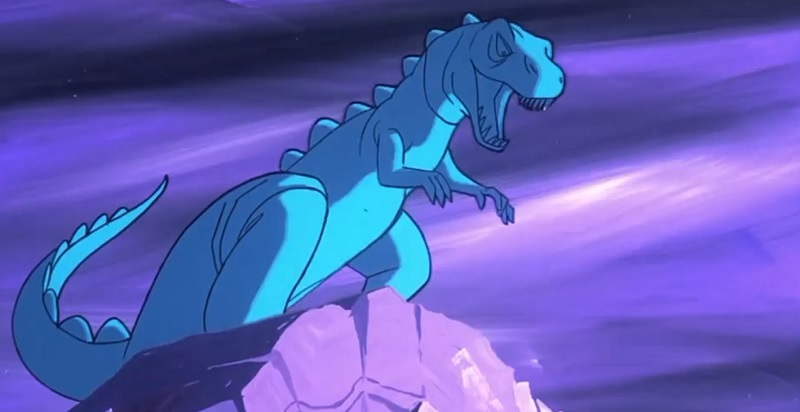 The caretaker named Rhino shows up and even the three stooges find him suspicious, but are too afraid to fire him. 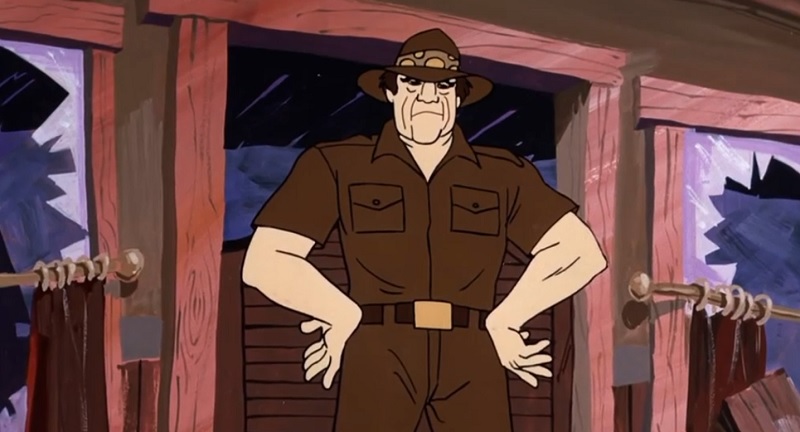 At the dinosaur exhibit, the t-rex is revealed to be a mechanical plaster dinosaur. The dinosaur itself is hollow and Freddy finds this weird as there’s no way to get in until Scooby accidentally finds the secret passage.

At the same time, the gang are accosted by a man who claims they are trespassing. The strange man lets them go in the dinosaur where they find lots of gadgetry, like pulleys and a tape recorder. The tape recorder is a boon, as they can now turn the dang thing off and stop the loud and earth shaking growls.

The man introduces himself as Amos Crunch the Stooges manager.

The gang are about to leave, however, Freddy wants to find out what that Giant Bat is. Velma also mysteriously vanishes. Velma has gone off to follow Amos Crunch, and while she’s on his tail, he tosses a switch and Velma falls through a trap door.

The stooges go one way, Shaggy and Scooby go another way, and Daphne and Freddy head out into the desert to search for Velma.

Lots of haunted but comical gags occur in the ghost town exhibits, such as the cowboy museum, house of mirrors, mine cart ride and the last chance saloon as the gang and stooges search for Velma.

Furthermore, The stooges run into a man dressed up as an dimes tore Indian and Scooby and Shaggy run into a mechanical gunslinger. In the desert, Daphne and Freddy are stalked by a moving but thirsty cactus. 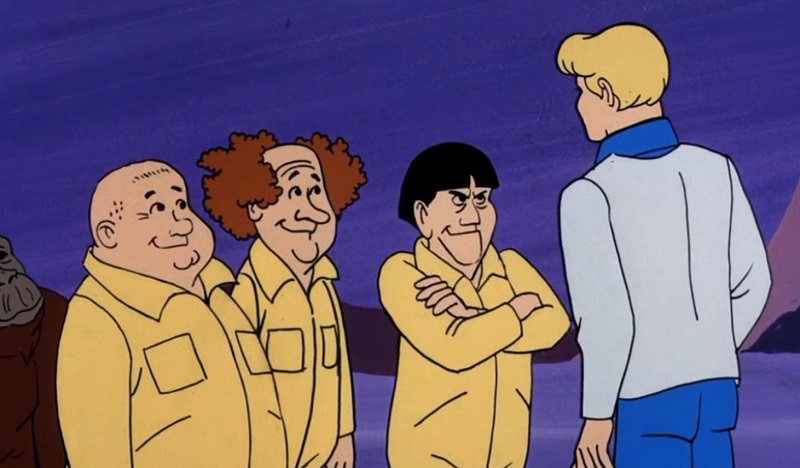 Eventually the stooges, Freddy and Daphne end up in the mine where they find Velma. Unfortunately they are all trapped. Scooby and Shaggy hear them down there through an old well and use the mechanical dinosaur to get everyone out of the mine by digging everyone out.

More haunted hijinks occur and the giant bat car piloted by the Indian and the mechanical gunslinger try to escape. Scooby and Shaggy use the dinosaur to capture it and toss the bad guys in the ghost town jail.

Unmasking the Indian and gunslinger it’s revealed to be Crunch the manager and Rhino the caretaker. 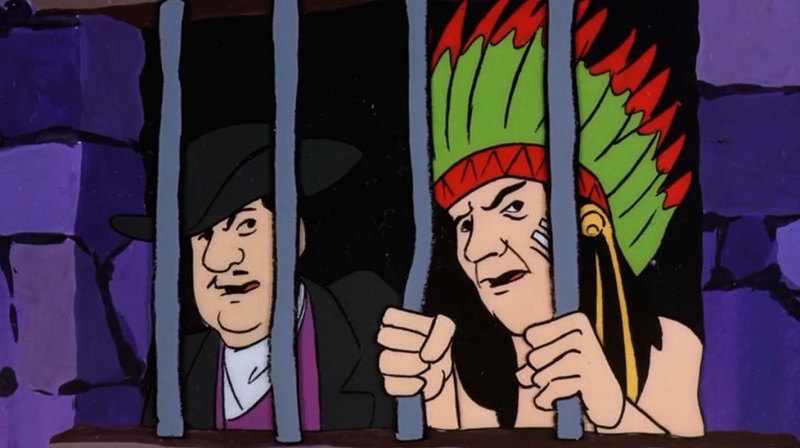 In the mine there was Uranium so Crunch and Rhino used the bat to sneak the uranium to Mexico for a huge profit. To work in privacy he had to scare everyone away. The loud dinosaur noises were also used to cover up their mining noises.

With another mystery solved, the gang head off on their next adventure. The sheriff even lets Shaggy take home a little bag of Uranium,

This wasn’t really my thing as it was too much comedy and didn’t feature a memorable villain. Plus the 3 stooges were just a shadow of their former selves.

This episode was a little too busy for me and I found it too clunky, loud and annoying. If I was hopped up on sugar smacks as a kid in the 70s, I’d probably dig this, but as a middle aged man, I’m not really into this.

You all know by now I love spookiness and this episode was lacking in the chills. This episode also seemed to have a lot of wasted potential as there is enough cool stuff in here, but they never spend enough time with anything to make it great.

Things I did like were the clever mechanical dinosaur and the Bat Truck. I also liked Rhino and Amos Crunch and thought they both made for sinister villains. However, there was too much going on, so they didn’t get enough screen time to make an impact.

The stalking cactus as was Daphne and Freddy bickering in the desert. The Ghost Town amusement park was also cool, but I think mismanaged as they just hop from attraction to attraction.

For the Stooges, they were okay, but I much prefer them on their own show or in their own movies. I don’t think they translate well to animation as a big part of their schtick was a cartoony physical humour that isn’t conveyed properly when animated. There was none of the comedic fighting and slapping done here that made them the three stooges.

Anyway, not a strong episode for me. If you do love this episode, take no offense as this is just my opinion and like I mentioned before, I love the spookier Scooby doo episode

Once again, thanks for any likes and until next week, when we will be covering the Dynamic Scooby-Doo Affair, Stay Spooky.