The episode features the gang investigating a series of dognappings where show dogs have been stolen.  Using Scooby as bait, Scooby is kidnapped by a witch doctor, and it’s up to the gang to track him down to his secret lair!

This episode was of particular interest to me, as it features another great dane who is much more chiseled and angular than Scooby-Doo.  This might be an inside joke as the original Scooby-Doo artist Iwao Takamoto, when designing Scooby, purposely gave him his droopy features and round chin so he would appear more cowardly.

The sign in the Sheriff office at the end says Mesa County Sheriff, so I’m assuming this episode takes place in Colorado rather than California.  Or perhaps the geography has changed.  There is a Mesa in California, but it’s not a county but rather a census designation.

Another interesting feature is that we see some high-tech tracking gadgets in the back of the Mystery Machine.  These don’t turn up in later episodes of the earlier seasons. 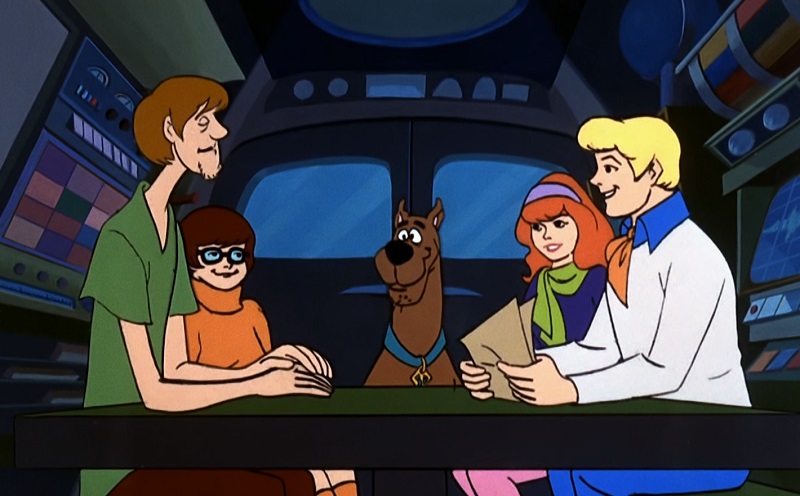 This is also the first time we see Shaggy eat a Scooby Snack, and Daphne get kidnapped.  We also get Scooby on a leash, which I don’t think is something we see too often.

🐩 Decoy for a Dognapper -Episode Review

The episode begins with Scooby out for a stroll during the day.  Yes, the day, no spooky castles or haunted beaches to set the tone for this one.

Scooby spots a female poodle out for a walk with her posh owner, and presents the poodle with a makeshift bouquet of flowers.  The poodle walks by ignoring Scooby, but as the poodle and owner walk behind some bushes, the poodle is dognapped. 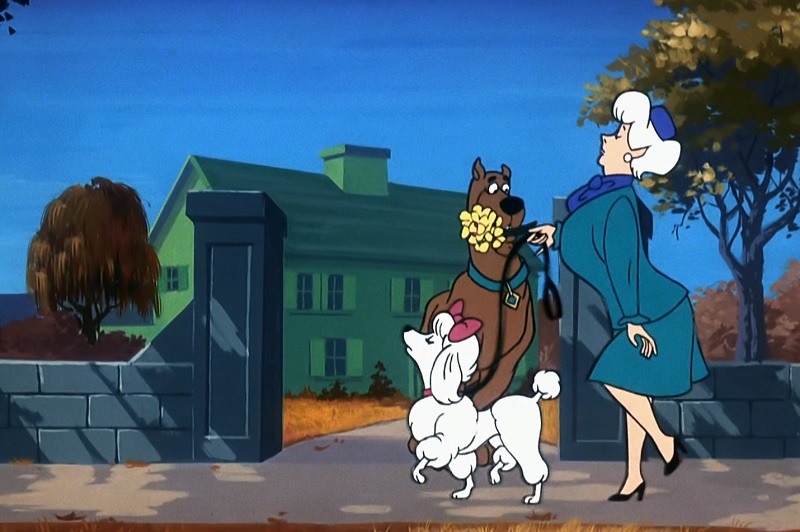 The rest of the gang are partying it up on the beach at night.  Shaggy and Velma are roasting some hotdogs, while Freddy and Daphne dance to some groovy music.  Scooby rushes in and changes the radio to the news.

Here we hear a reporter explain this is the third time a prize dog has been kidnapped in the last three days.  Buck Masters, the owner of the first dog who has been stolen, is offering up a $500 reward.  Freddy declares they’ve just been handed their next mystery.

At Buck Master’s office, Buck explains that he refuses to pay the ransom, and instead use the money to catch the crooks.  Buck explains he was guaranteed to win first prize at the dog show that year, but now his competitor Bob Miller will win with his great dane.

The gang come up with an idea to use Scooby as a Decoy for Bob Miller’s dog, so they can trail the dognapper to their headquarters.  Freddy has a tracking transmitter that will allow them to track Scooby with ease. 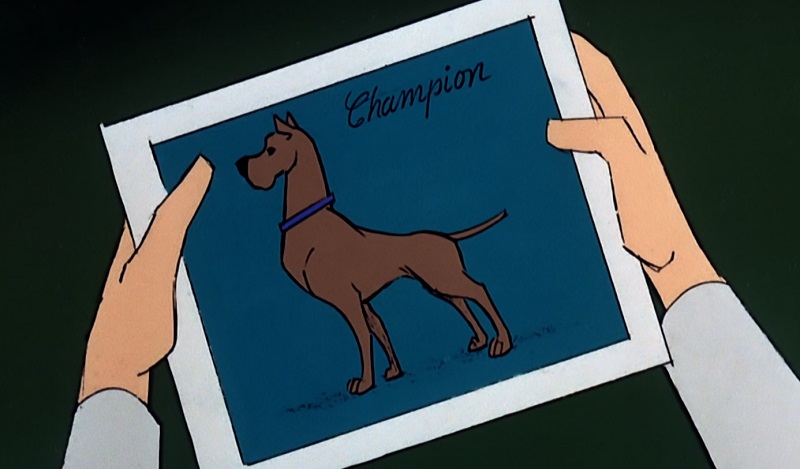 Out on Beach Boulevard, Shaggy walks Scooby on a leash at night.  Midway through the walk, a van begins to smoke, causing a cloud of dust to fill the evening sky.  Caught in the smoke, Shaggy loses Scooby after a mysterious hand cuts the dog leash and whisks Scooby away.

Shaggy runs to a nearby gas station, and asks the attendant, named Charlie, if he has a car he can borrow.  Charlie offers up his motor scooter, and Shaggy takes chase of the mysterious van.

Freddy and Velma notice, by way of their tracking computer, that Scooby’s transmitter is moving fast and must have been kidnapped, so they take chase as well. 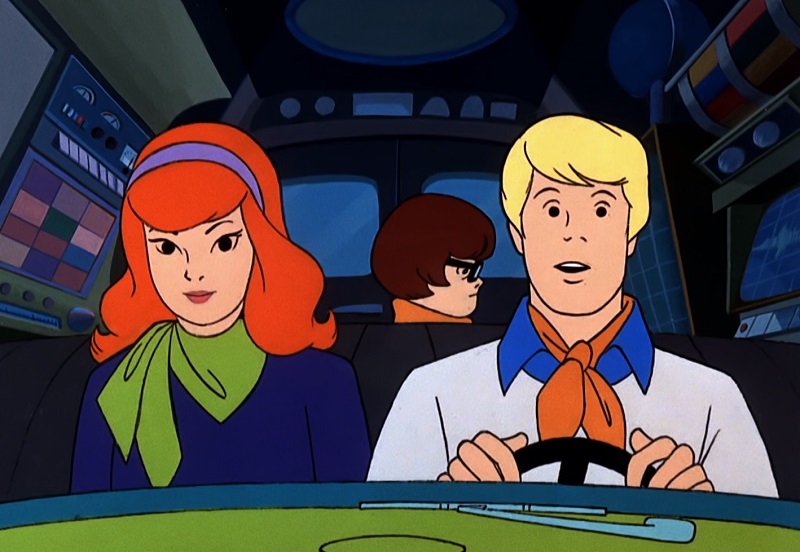 Driving the motor scooter, Shaggy comes across the ghost of Geranimo and crashes into a log, throwing him out of the chase.

We then cut to the dognapper’s secret headquarters and we see a Native American Witch Doctor open a wooden crate that his accomplice Mike has unloaded.  Instead of Miller’s great dane, he sees that it is Scooby, and boy is he not impressed. 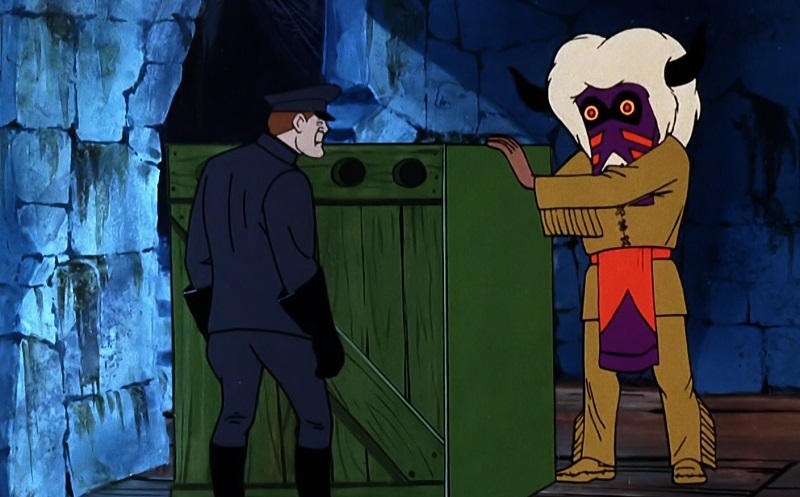 The Witch Doctor tells Mike to get rid of Scooby by tossing him on a hand cart that runs down the mountain.  Mike tosses Scooby back in the crate, and heads out.

Freddy meets up with Shaggy, and Shaggy explains the ghost he saw.  Velma spots no prints, but discovers a thousand year old tomahawk.  Scooby’s collar transmitter pings, and Daphne sees that it is heading for Indian gap, so Freddy decides they should go and intercept it.

This is good news for Scooby, as Mike has tied the crate to the handcart, so he can send Scooby down the mountain on some train tracks.  Scooby manages to saw a hole out of the crate to stick his head out, and Shaggy spots him as he flies by.  Freddy steps on the gas of the mystery machine and Shaggy manages to jump out of the Mystery Machine and on to the cart.  Unfortunately, the hand cart goes down a bridge, and the Mystery Machine can no longer take chase.

Shaggy tries to slow the cart down, but has problems as the brake is rusted.  To make matters worse, a train is headed their way.  Shaggy manages to get the cart going in reverse, and Freddy activates a switch, diverging the train in another direction, saving Scooby and Shaggy from death. 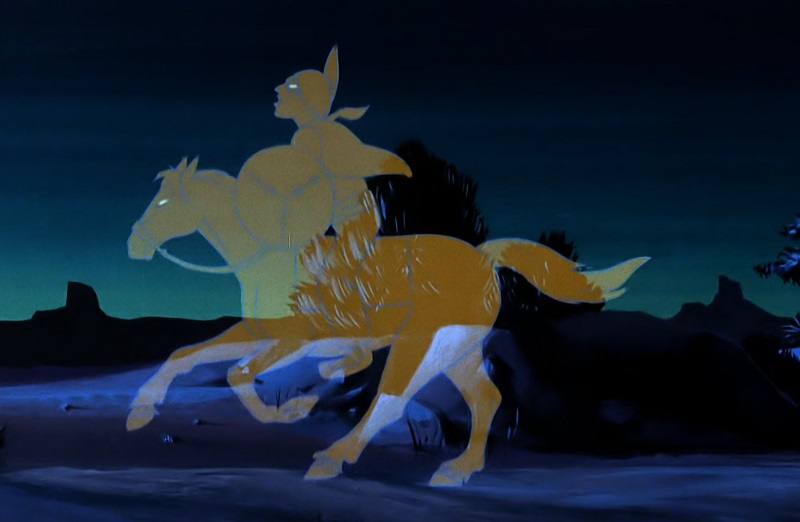 Scoby explains to Freddy where the dognapper’s secret headquarters is, but isn’t of much use as the only clue he has is that he heard the Ghost of Geronimo.  With this being the only clue they have, the gang take the hand cart back to where Velma found the tomahawk.

On their journey there an arrow strikes the hand cart and they spot the ghostly form of Geronimo.  Freddy examines the arrow and notices that it’s factory made.  Shaggy observes an Indian village up on the mountain and Freddy has everyone climb up so they can explore. 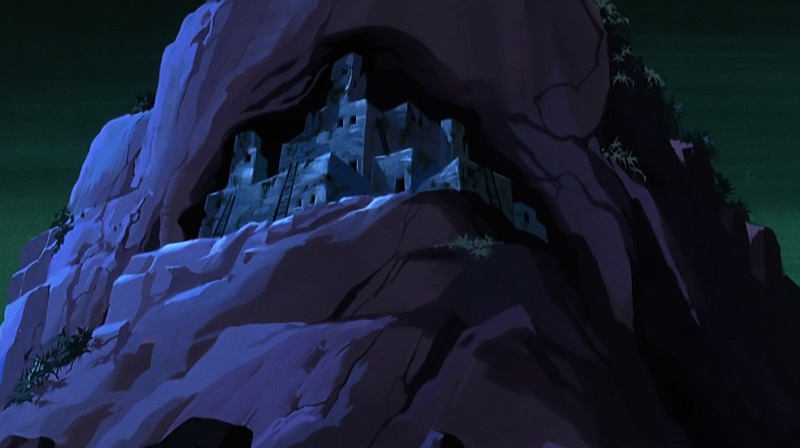 Up on the mountain village, they come across the Indian Witch Doctor who tells them to leave, or they will suffer the same fate as the Spanish Conquistadors who are buried in the desert below. 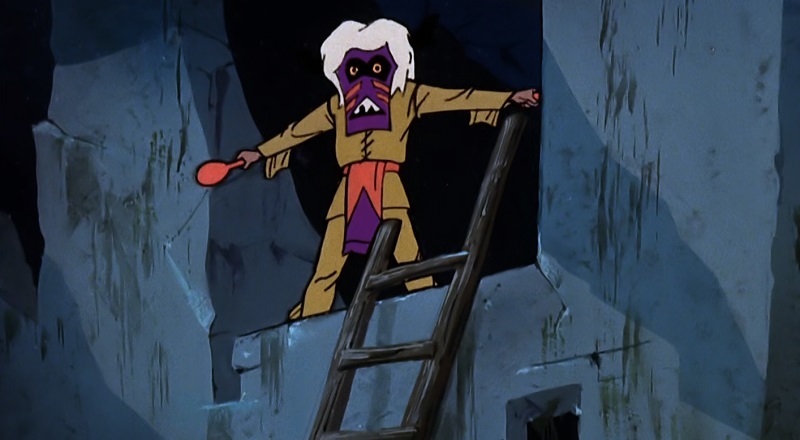 Velma makes note that the Indian speaks good English for being a thousand years old.  Instead of splitting up for once, Freddy suggests everyone heads for the dome shaped building.

Some crazy bat action splits up the gang instead, as Velma loses her glasses, and Shaggy and Scooby run away in fear.

Freddy and Daphne end up at the dome shaped building, which Freddy explains is the ceremonial building where they held their special rites.  Inside he spots a fire, and the Witch Doctor emerges behind the flames at an altar.  The Witch Doctor tells them to leave once more before disappearing. 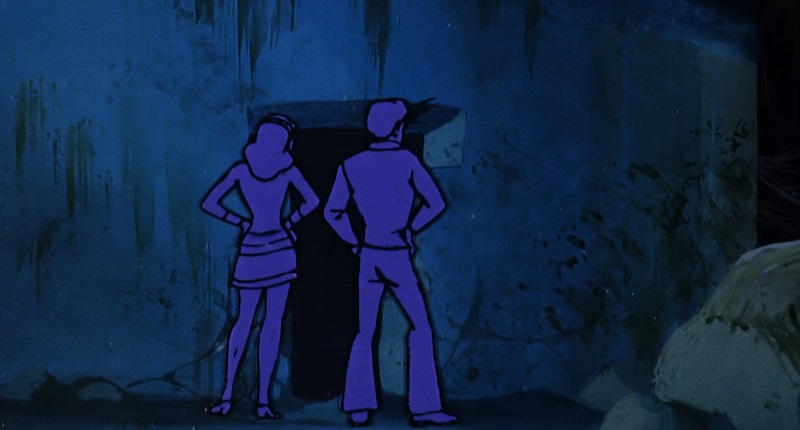 While Freddy examines the altar, Daphne triggers a trap door, and she is carried off before Freddy even realizes that she’s gone.

Always hungry, Scooby smells food, and leads Shaggy to a storeroom full of canned dog food.  Scooby realizes that they’ve found the dognappers hideout, and as a reward, the pair make themselves a special sandwich.  Before Scooby can mow down on his treat, a hand pushes him into a secret trap door, where he flies down a ramp and crashes into Daphne who is tied up to a post.

Freddy figures out the alter’s secrets and it opens revealing Velma, Daphne and Scooby who were lost within the village’s secret pathways. They also find the kidnapped dogs, who explain to Scooby where the Witch Doctor is hiding himself.  Freddy commands the dogs to sic the Witch Doctor and they run off in the Witch Doctor’s direction. 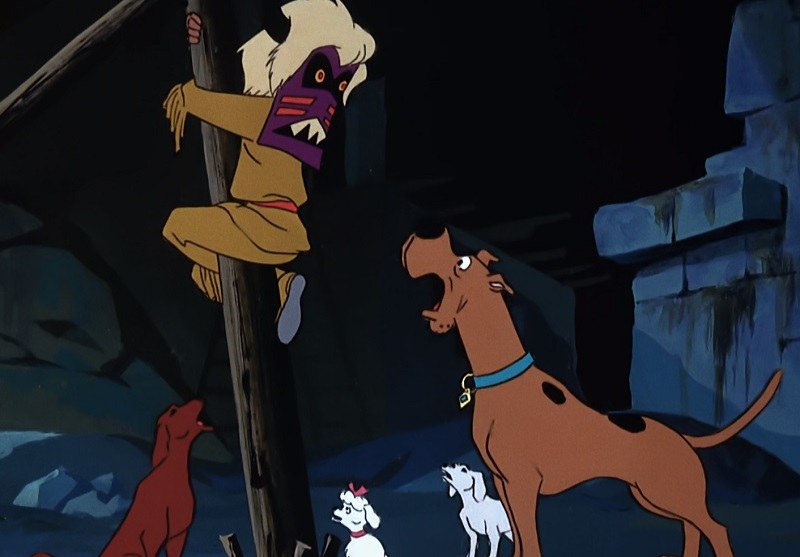 Everyone, including Shaggy, is caught up in the Witch Doctor chase, and they corner the witch doctor up on a beam that he’s climbed.  Scooby unmasks him, and it’s revealed to be Buck Masters. 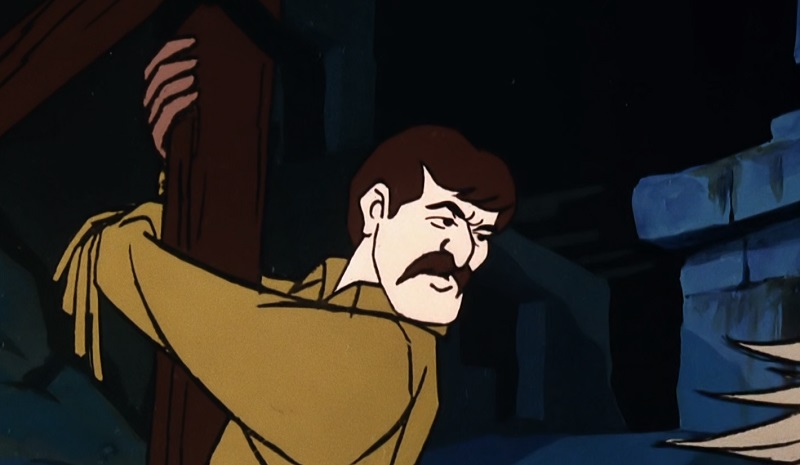 At the Sheriff’s office they explain that Buck kidnapped the three dog’s that could beat his dog ‘Big Red’.  His plan was to release Big Red before the show, where Big Red would end up winning first prize. 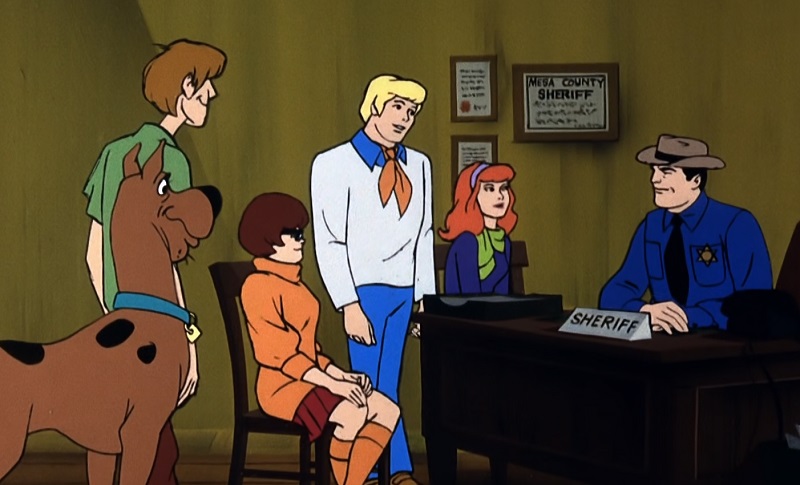 The phantom Geronimo was simply a projection used from the back of Buck’s truck.

I give this episode a 7 out of 10.  While the villain looks cool, we only see a couple shots of him, and the Ghost of Geronimo is not that memorable either.  I did appreciate the high-tech gear in the Mystery Machine and wish they ran with this in later episodes.  They also didn’t do much with the spooky Indian village, or any of the other set pieces other than the great train dodge scene.

For me, this one is pretty forgettable, but I’ll take it over some of the modern interpretations of Scooby-Doo any day.