What the Hex Going On? Is episode 6 of season 1 of Scooby Doo Where Are You!  It originally aired on October 18, 1969 and features the infamous scene where we see Shaggy on roller-skates roll into a shower.

This episode sees the gang visiting their friend Sharon Weatherby, only to have their vacation interrupted by a ghostly neighbour who lives at a run-down mansion.

What the Hex Going On – Review

The episode begins as the camera focuses on the exterior of a spooky house where we hear a hypnotically commanding voice call out.  The camera then shifts to a graveyard where we see a middle aged bearded man walking in a trance towards the beckoning voice. 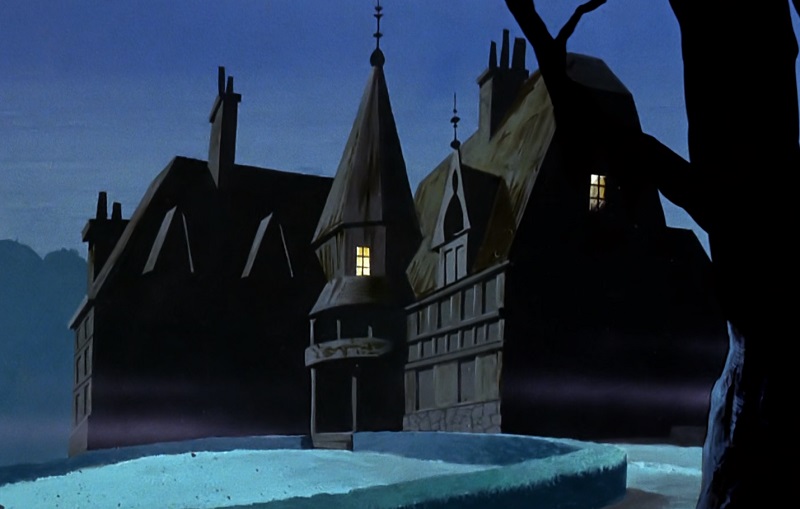 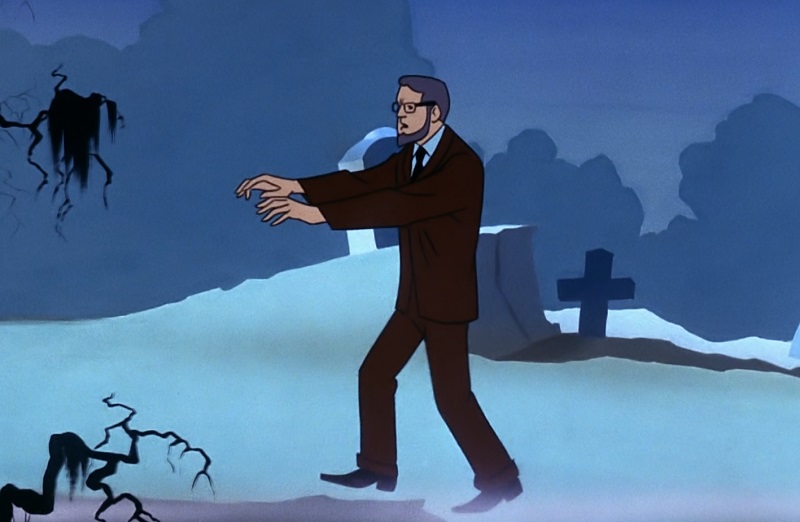 We then cut to the Mystery Machine driving down a swampy road.  Here, we learn that they are headed to the Weatherby estate to visit their friend Sharon.  During the drive they see the bearded man walking possessed into an old mansion.  Even though they find it kooky, they continue to Sharon’s estate. 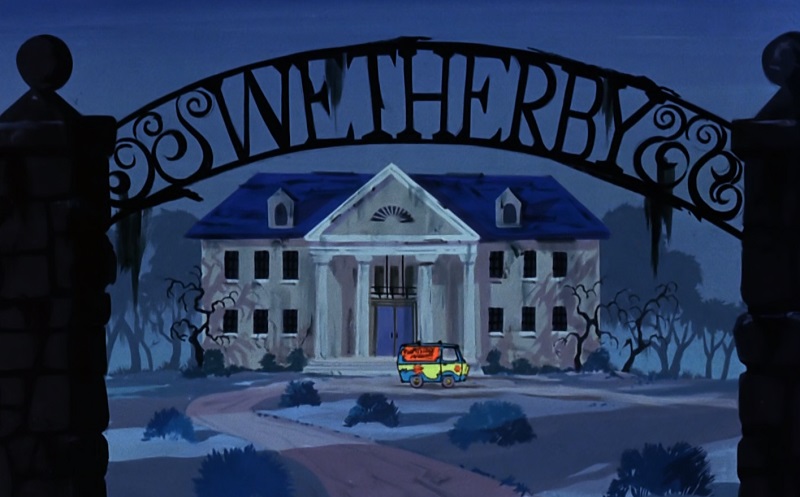 At the Weatherby estate, Sharon and her father explain that they’ve been hearing a lot of strange noises and that her Uncle Stewart has vanished.  Daphne explains they saw a man walking into a Mansion, and Sharon’s dad suggests they head to Kingston Mansion to investigate.

At the Kingston Mansion, they run into an elderly man, who turns out to be their Uncle Stewart transformed into an old man.

Back at the Weatherby mansion they sit Uncle Stewart down, where he explains he heard a ghostly voice call out that he had to obey.  In a trance he walked past the Kingston Mausoleum and into the Mansion where he saw the Ghost of Elias Kingston.  The ghost tells Stewart that he has to give the Weatherby  fortune to the Kingston Mansion, or else his whole family will suffer the same fate of losing their youth.

Sharon’s father attempts to call the Sheriff but the phone lines are dead, so Mr. Wetherby drives off to get the Sheriff.  While the gang head off to sleep, Scooby is left to guard Uncle Stewart, but ends up falling asleep.  Unfortunately the voice beckons for Uncle Stewart once more, and he disappears into the night.

Scooby wakes up the rest of the gang and they discover that Sharon has disappeared too, so they head back to Kingston Mansion.

Inside the mansion, the gang walk past a bookshelf where they fail to notice the ghostly Elias Kingston Phantom slip out of a secret room where Sharon is tied and gagged up. 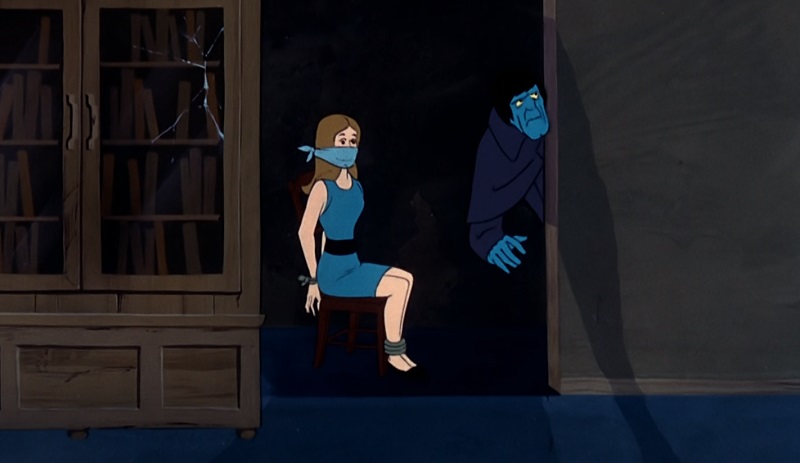 The gang split up looking for clues, and Scooby is accosted by an unfriendly bulldog.  Hooking up with the rest of the gang, they determine that the ghost is a fraud as a real ghost would not require a watchdog.

Shaggy also comes across the skeletal remains of Uncle Stewart who has aged himself into a skeleton.  The Ghost of Elias Kingston reappears and warns the gang once more that if he does not get the Weatherby fortune, his hex of aging everyone in the house will remain.

The ghost walks away, and the gang follow him outside where they watch him walk into the Mausoleum.  Shaggy dusts the door for prints and this ends up being clue #2 as a real ghost would never leave fingerprints. 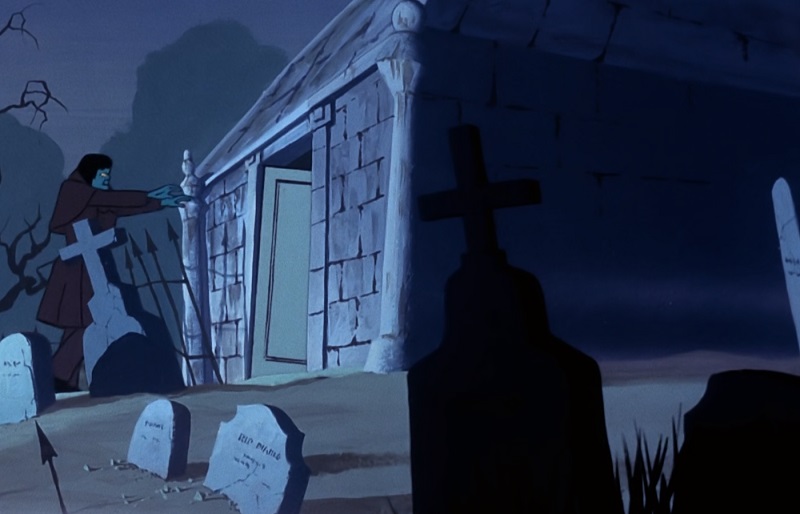 Bribed with four Scooby snax, Shaggy enters the Mausoleum and declares it safe for entry.  The rest of the gang walk in and Velma spots a big book of Crystalomacy, which is a book on how to use a Crystal Ball. 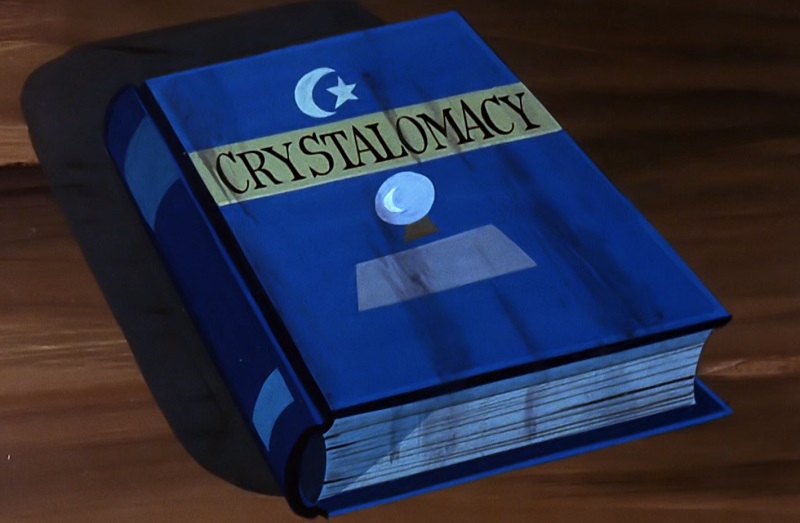 Freddy suggests that there is an old Swami place in town, and that there might be a connection.  Before they can head out to investigate, the Ghost locks them in the Mausoleum.  Trapped, they knock on the walls for a secret passage, and Scooby is the first to discover it.

The passage lets them out, and the gang drive to the Swami place.  Entering, the business is empty, so the gang snoop around and come across a levitating table.  The crystal ball on top of the table lights up where Elias’s head materializes and threatens the gang.  The table chases the gang around the room until they end up breaking it.  Underneath it they find a fan, which was powering it about. 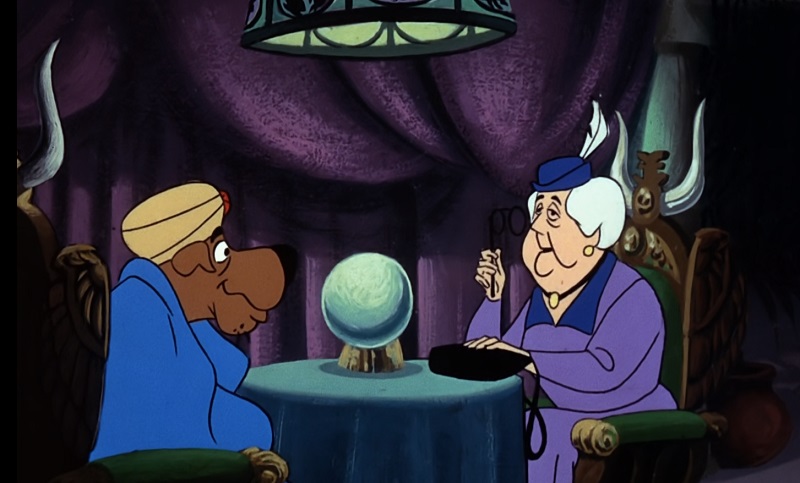 Inside the Swami parlor, they find a professional makeup kit, and a miniature tv camera that is connected to the crystal ball.  Satisfied with their clues, Freddy comes up with a plan.

Using Shaggy and Scooby as bait, the two straggle in the mansion with a chest poised as the Weatherby fortune.  The two get the ghost to chase them and lead the ghost right into Freddy’s trap which uses the Ghost’s camera tricks and fake skeletons against him.

The gang then trap the ghost in a net and unmask him.  There they discover the ghost is Uncle Stewart.  The makeup kit they found was what he used to make himself look old, and Sharon was kidnapped as she saw the elderly Uncle Stewart’s fake wig blow off. 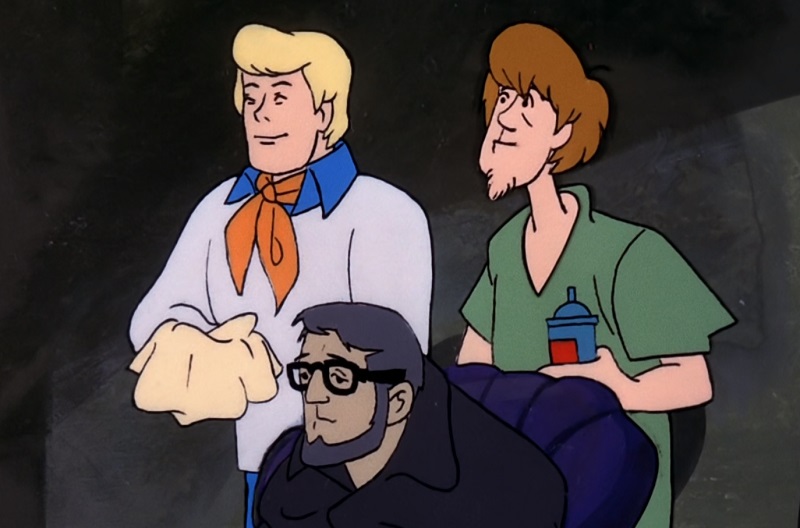 The Swami was Uncle Stewart’s alter ego that he planned on disappearing as he needed a new identity once he got a hold of the fortune.  With the sheriff on his way everybody sits down for a turkey feast, which Scooby has gotten to first.

The ghost of Elias Kingston looks okay, but I don’t find him particularly menacing or interesting, other than his powers to steal people’s youth by putting a hex on them.  The intro where we are introduced to his hypnotic voice was cool as well.

Where the episode does shine is the old Mansion set pieces.  With some creepy rooms and action sequences, several of the scenes were used for the series opening intro such as Shaggy on roller skates, the exterior of Kingston Mansion, and the Ghost of Elias Kingston emerging from a secret passage.

I also enjoyed how Velma was carrying around a fingerprinting kit, which ties into how the early episodes wanted the gang to be true detectives.  Much of this is discarded in later episodes and the gang typically find clues by accident.

Freddy’s trap was also fun, and I enjoyed how the gang used the villains’ tools against him.

Overall though, this one doesn’t shine too bright for me, hence the 8 out of 10.

Well that wraps up another episode.  Until next week, when we’ll be covering Never Ape and Ape man, Stay SPOOKY!