Never Ape an Ape Man is episode 7 of the first season of Scooby Doo Where Are You! Originally airing on October 25, 1969, this episode sees the gang visiting Daphne’s Uncle John Maxwell, who is a movie director. The gang are acting as extras on the set, due to the locals being scared away by a sabotaging ape man.

I can see why this episode was made, as apes were all the rage in the late 60s and 70s. Planet of the Apes was huge. People often say the Star Wars was the first ‘big blockbuster franchise’ but I disagree, Planet of the Apes was a big hit a few years before and went on to spawn sequels, a tv show and a cartoon, along with board games, lunch boxes and Halloween costumes.

Unlike the planet of the apes, this ape man does not talk. In fact, I think he’s just supposed to be an ape, and not a cross between an ape and a man.

This episode has a few ‘firsts’ with Scooby showing a bit of courage in one scene, and Shaggy claiming that he isn’t afraid either. I guess it’s only ghosts that scare our duo and not animals.

This is also the second episode so far to not feature the Mystery Machine (the first being Hassle in the Castle which sees the gang marooned on a haunted island).

Anyway, enough with the jibber jabber, let’s get on with the review.

The episode begins with the gang on movie set for the Ape Man of Forbidden Mountain, where Daphne’s uncle John Maxwell is directing the production. Unfortunately all his local staff, except for his stuntman/Ape actor – Carl, and lead actress Candy Mint have quit. The locals are all afraid of the movie set due to a superstition of a real ape man burning down a mansion that the movie set is built upon. Thus, Scooby and the gang are acting as extras. 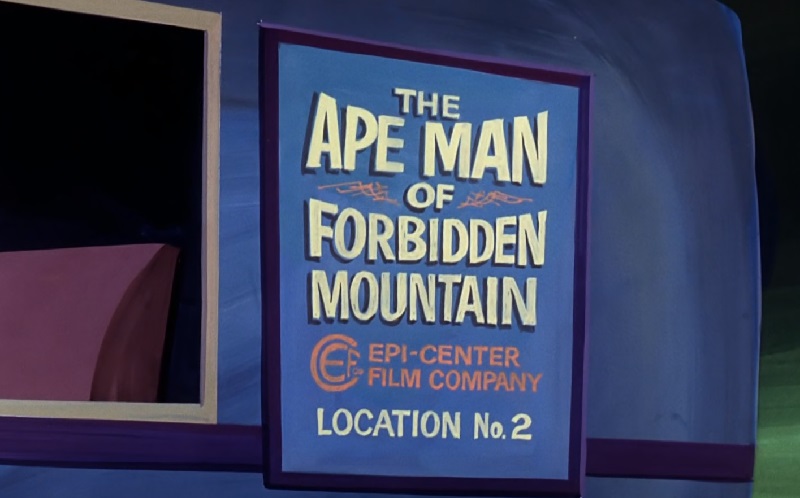 In the past few weeks, Uncle John claims they’ve had 3 reports of the Ape Man appearing at night. During the filming of a pivotal scene on a rope bridge, the real ape man appears, and puts Candy in a dangerous situation. Scooby rushes in to save her, but despite Scooby scarring the Ape Man off, Candy quits the production.

Uncle John thanks Scooby for his bravery, and the gang searches Carl’s trailer for the missing stuntman. Inside, Scooby find’s the ape man’s mask which Uncle John says is just part of his regular costume. They also find Carl locked inside a wooden chest.

Carl is inside the chest with his full costume on, and tells the gang he came in to get ready for his scene, but a big hairy animal threw him in the trunk. Carl then quits the production as well, at least until the ape man is caught.

Freddy and the gang volunteer to guard the set to help catch the ape man, and even the normally cowardly Shaggy seems ambitious to help.

The gang set up shop in Starbright Films’ Mansion Set. Velma explains that the ape man lives somewhere nearby in a cave that’s hidden in some rocks. Freddy also informs the gang that the Mansion set they are in was built upon the grounds of the old mansion that had burned down. 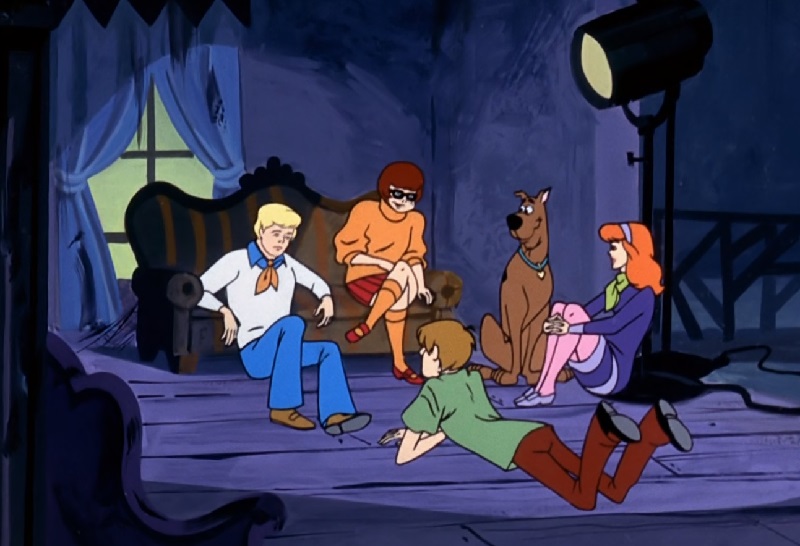 Looking for clues, Scooby finds a half eaten floor hamburger. Shaggy dives in to eat it, but Freddy puts a stop to that as it’s a clue. Velma inspects it and sees claw marks, and Daphne finds this unusual as ape’s do not eat meat. 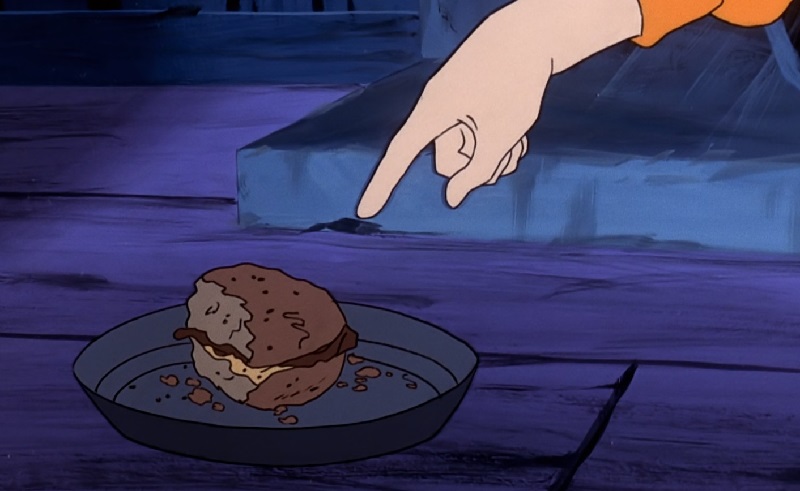 Freddy then tells Shaggy he can now eat the burger, but Shaggy is disgusted that an ape had his dirty paws on it, so Scooby gulps it up instead.

The gang then split up to search for the Ape Man, but before they head off Freddy reminds everyone that the set was built to film a scary movie. Daphne pipes in and explains that they’ll bound to come across some trap doors.

Scooby, Shaggy and Velma head off and come across a parrot who frightens them when it yells out “Stick ‘em up! What’s the Password?” The trio don’t have much time to react as a statuesque like ape man on a rolling platform hurdles towards Shaggy and tackles him down a staircase. In a fit of panic, Shaggy tears the Ape Man apart only to realize that it is a stuffed dummy.

The gang regroup in the Mansion museum and Freddy comes across a copy of the film’s shooting script. The script was left open to the scene that they were shooting that very day. Daphne searches the shelves for additional clues and triggers a trap door that sends Freddy falling backwards in his chair. Meanwhile, Scooby has a close encounter with the Ape Man who plays peekaboo with Scooby behind a pretend mirror. 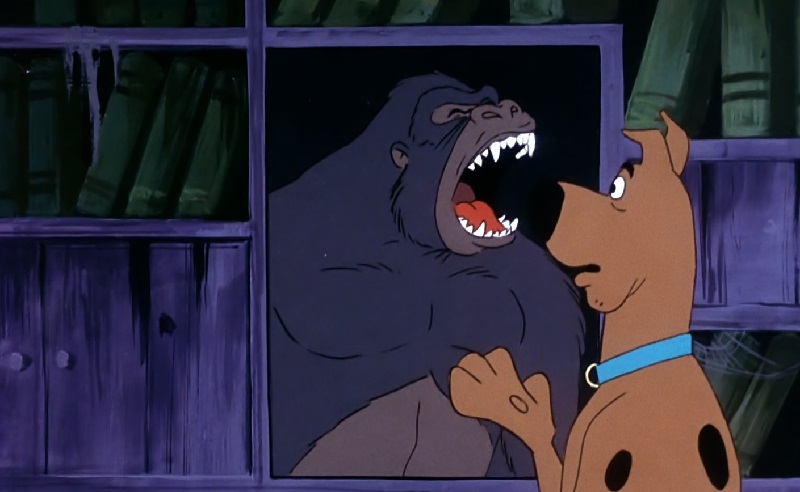 Scooby growls at the Ape Man and attempts to capture him, but Daphne triggers a switch that causes the stairs on a staircase to turn into a sliding staircase, which sends Scooby back down to the rest of the gang (minus Freddy).

Daphne pushes another button on the wall of switches, which opens a passage that Freddy emerges out of. In his travels, Freddy announces that he has found the perfect trap for the Ape Man.

Freddy brings the gang to the set of the film’s final scene. In that scene the ape is to be captured with a net that hangs from the ceiling. All they have to do, is lure the ape man into said net, and voila – captured.

Velma bribes Scooby with five Scooby Snacks and Daphne bribes Shaggy with a Shaggy Snack, which is a pot pie loaded with cherries, anchovies, pepperoni, and a thick chocolate sauce.

It doesn’t take long for Shaggy and Scooby to run into the ape man, but the trap fails, and Shaggy ends up in the net instead of the ape man. While the gang discuss their options, Scooby finds a tuft of fur in a wine cask. Velma opens the wine cask up and they find another secret passage which is a tunnel that leads into the mountain.

The gang explore the tunnel and come to an opening that brings them to the dressing rooms for the movie cast. Freddy instructs everyone to get searching and they all split up to cover more ground.

Shaggy and Scooby swiftly come across the ape man, who ends up chasing the entire gang back into the mansion. With some quick thinking, Freddy traps the ape man by triggering the sliding staircase.

The ape-man is never unmasked, but during the final chase, Shaggy had captured a polaroid like snapshot of the man behind the mask. Which turned out to be Carl, the Stunt man. 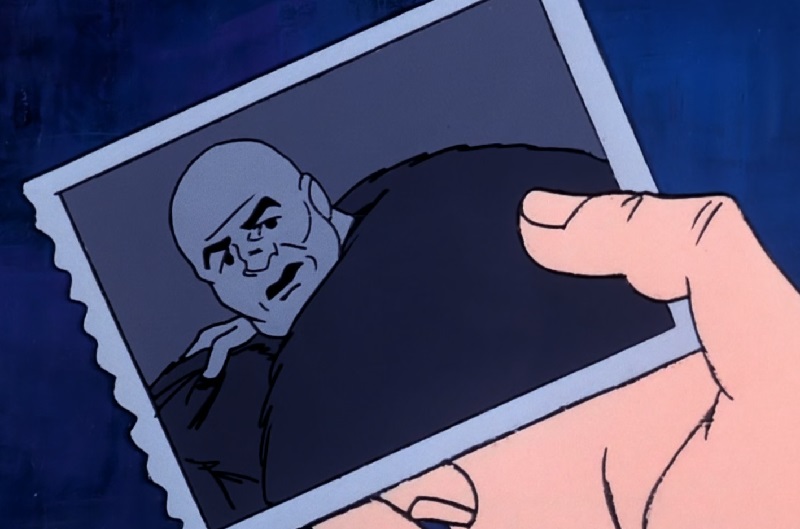 Carl decided to sabotage the picture as Uncle John wouldn’t let him play lead. Freddy thought it was rather clever that Carl locked himself in a chest to throw the heat off of him.

And with that, another mystery is solved.

For me the floor hamburger saves this episode from being a 6. This scene was incredibly funny to me as it just showcases how much of a hippy Shaggy is.

The ape design was cool, but not memorable. I don’t think we’ll ever see a funko pop or ape-man toy, but who knows, maybe I’m wrong in that regard.

Scooby and Shaggy showing acts of bravery was a bit weird, especially with Shaggy ripping the ape-man statue apart. Who knew the skinny guy had such brute strength.

I was disappointed there was no unmasking either. This is an earlier episode so I guess they didn’t have a formula down pat just yet.

Regardless, Never Ape and Ape Man is perfectly watchable with some interesting set pieces and a few funny moments. It’s just a bland villain keeps it from being memorable.

Well, that wraps another mystery. Until next week, when we will be covering Foul Play in Funland, STAY SPOOKY!