Go Away Ghost Ship is episode #14 of the first season of Scooby-Doo Where Are You! And originally aired on December 13, 1969

The episode sees the gang investigating a ghostly pirate ship that is raiding shipping freighters nearby.

In this episode we are treated to the first time Skull Island appears, and we will see it later in the series in The Creepy Case of Old Iron Face. We also learn that Shaggy rarely uses soap, which might be the reason why Freddy is always anxious to split up.

Go Away Ghost Ship is fondly remembered for having the main villain being The Ghost of Redbeard, as well as taking place mostly on a creepy pirate ship, but does it still hold up today? Let’s find out!

The episode begins with a large freighter ship sailing into the fog. The captain is looking out upon the sea with his binoculars and sees a ghost ship. In fear he exclaims ‘the ghost of red beard’.as Red Beard the pirate looks back at him and laughs like a maniac. 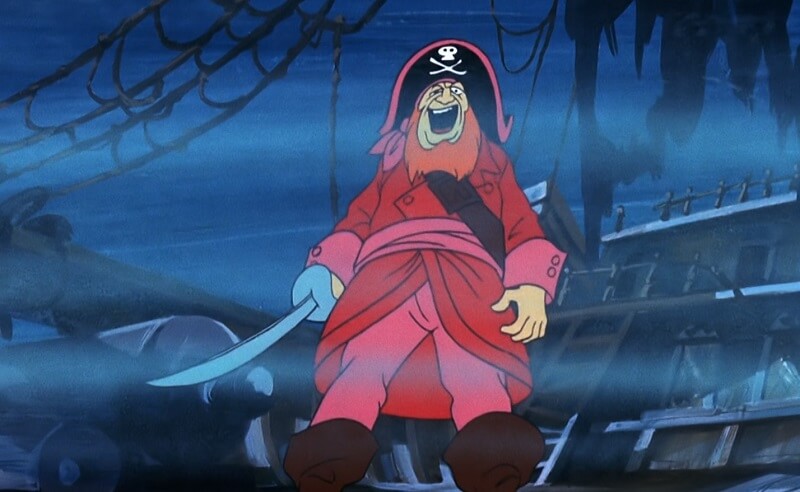 We then cut to the gang inside the Malt Shop. Freddy is reading a newspaper and is engaged about a story about how the third freighter this week has gone missing. C. L. Magnus, owner of the shipping line claims it’s the ghost of Red Beard the pirate seeking revenge. The pirate is causing so much trouble, that Magnus claims to be going bankrupt. 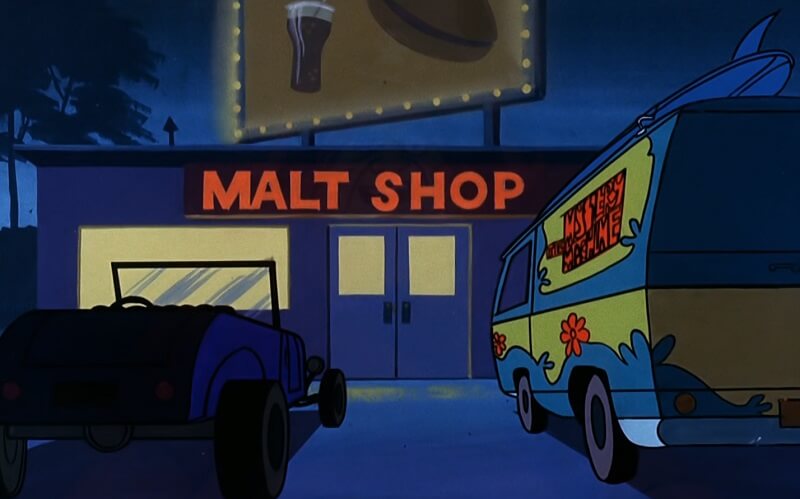 The gang want to know why the pirate wants revenge, so they drive to Magnus’ penthouse. A troublesome but creepy butler refuses to let them enter, but after some clever disguises, the gang manage to sneak in to hear Magnus’ story. 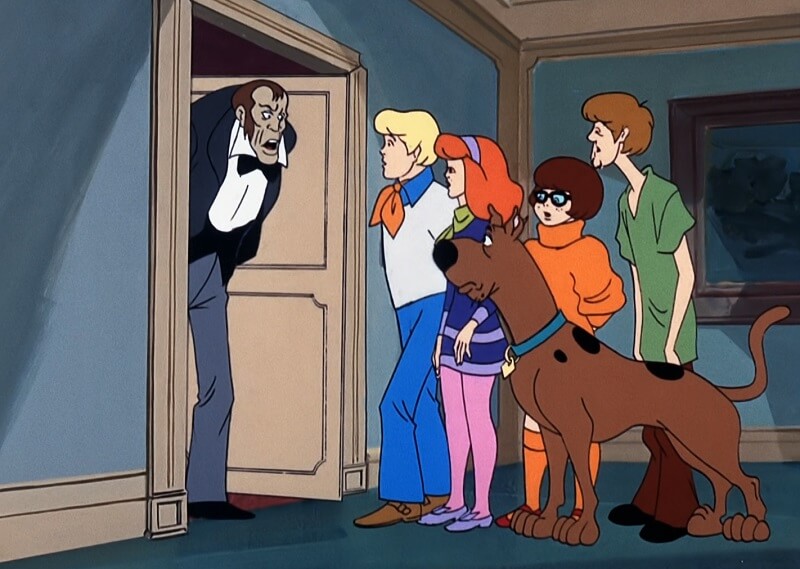 Mr. Magnus tells him that his ancestors brought the pirate to justice 300 years ago and that’s why he wants revenge.

Freddy promises to help, and schemes up a plan. Using a speedboat, the gang make their way to a freighter owned by Magnus scheduled to sail. Heading into a fog bank, they cue up a tape recorder where they play the sound of a freighter fog horn. Their plan works, and the pirate ship heads towards them. 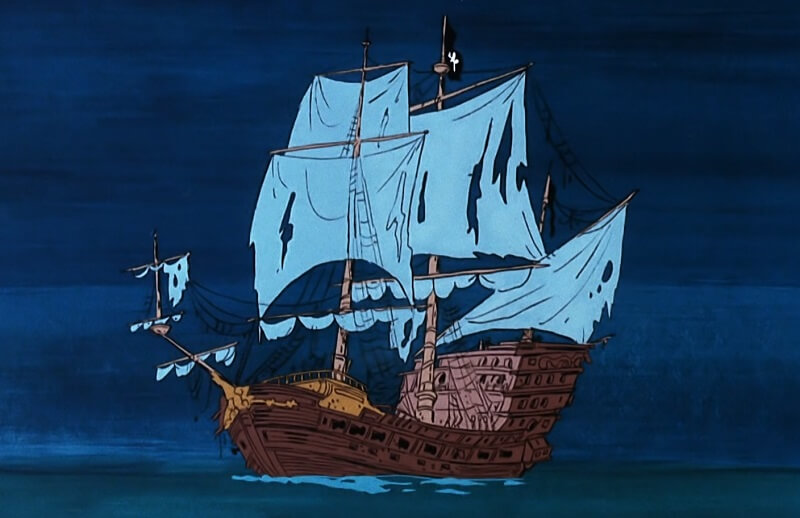 Unfortunately the plan worked too well and the ghost ship rams into their speed boat sinking it, and ruining Daphne’s hair. The gang are separated, however, they all manage to scramble aboard the ghost ship.

Scooby and Shaggy are the first to get aboard and they run into the pirate fairly fast as he appears in fake picture. A floating pirate sword corners the gang in a room where they come face to face with the Ghost Pirate and his two henchmen.

Freddy, Daphne and Velma hear the ghost pirate laughing and follow the ghost into a storage room where they encounter tubs of dry ice. Red Beard ends up locking them up in the room so they are captured.

We hook back up with Scooby and Shaggy who cook for Red Beard in order to save their lives. The two make a terrible ghost pirate stew that Red Beard forces them to eat. Since they put a lot of soap in the stew, the two blow bubbles allowing them to escape.

Our cowardly pair manage to evade the Ghost Pirate’s henchmen using a paper pirate hat and Shaggy’s impersonation skills and eventually hide under a tub, until they fall back into the sea.

Fortunately the tub floats, and they follow the ghost ship into a secret cove at Skull Island. I’m a little confused how this cove is a secret as the cave they go in is carved out to be a skull, which I assume is how skull island got its name. But, whatever, simpler times I guess. 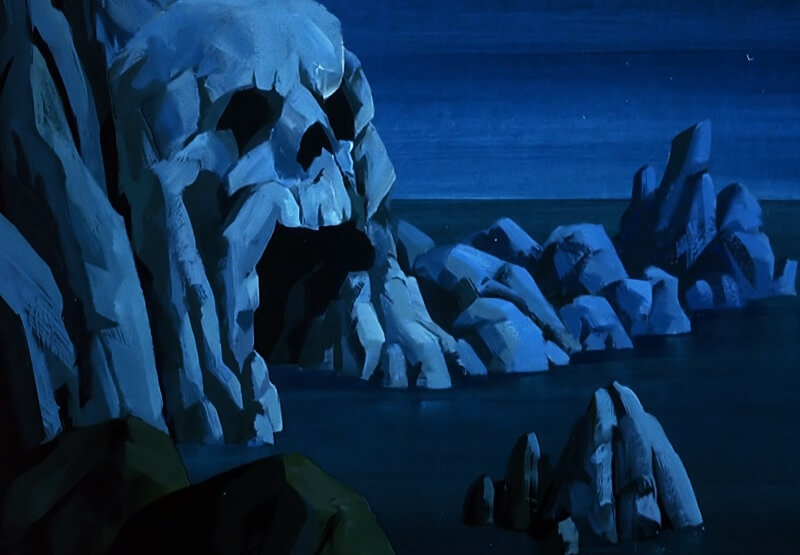 Inside the cave, Freddy, Velma and Daphne are shackled up, but Freddy’s McGuyver skills allow them to escape. They go deeper in the tunnels where they meet up with Shaggy and Scooby. Freddy notices that Shaggy’s paper pirate hat is the ship manifest, which is a paper that explains the dates that Magnus’ ships are sailing and the value of the contents aboard. 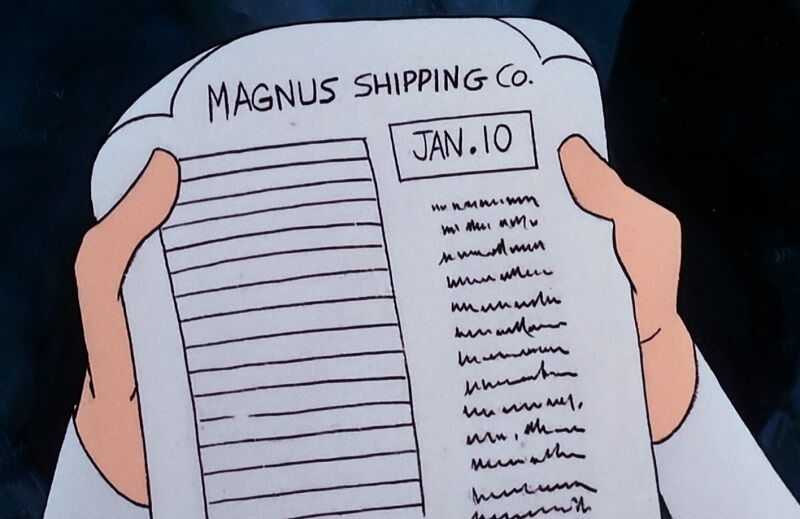 Confronted by four exits, they head into the tunnel that has tire tracks on the ground. The tracks come to a dead end where they find a jack in the box pirate skull who asks for a password. The skull actually looks really creepy, but it’s just a skull with a microphone and speaker on it. Shaggy comes up with the password which is ‘yum yum yum and a liverwurst alla mode’. 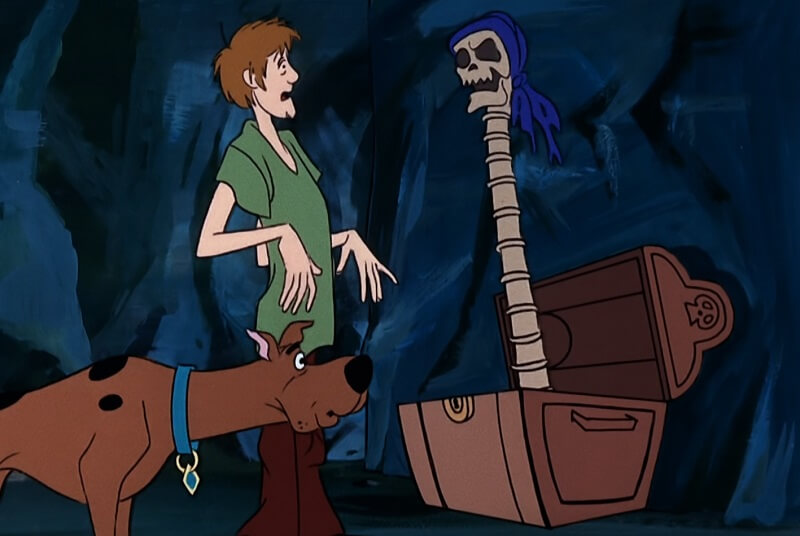 The tunnel opens up into a warehouse room full of crates and the gang are confronted by Red Beard who traps them inside. Freddy manages to capture the pirate henchmen using some makeshift bow and arrows where the arrows are made out of toilet plungers. 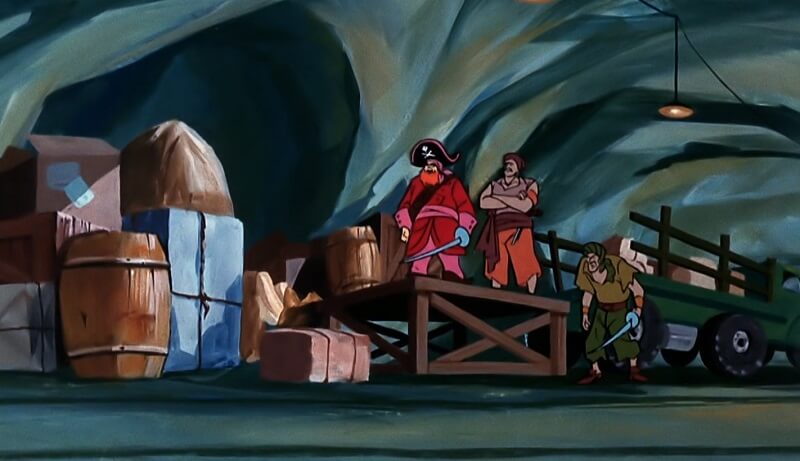 Shaggy and Scooby are confronted by the floating sword, but find a crate full of Scooby snax where they get some instant courage. Using various implements found in the warehouse, Scooby and Shaggy manage to eventually capture the Ghost Pirate in a pile of tires with an out of control jackhammer.

The authorities show up and Velma unmasks Red Beard who turns out to be Mr. Magnus. Freddy explains the Magnus was about to lose his freighter line unless he came up with a lot of money. Daphne chirps in that the easiest way to do this was to hijack his own ships and sell the cargo. 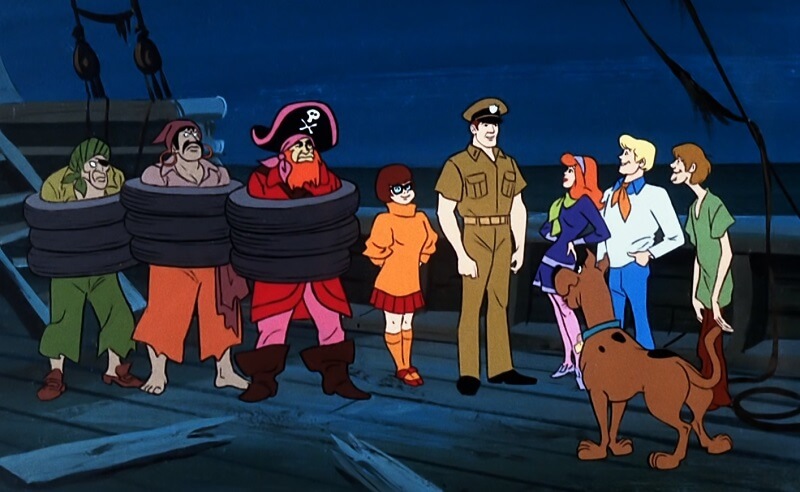 The ghost sword was operated by wires, and the mysterious fog was created by dry ice.

With another mystery solved, the gang sail off to find their next mystery.

This is a classic Scooby-Doo episode, but it doesn’t do much for me. Maybe I’ve seen it too many times, or maybe it’s just not creepy enough for me to rank higher.

What I did enjoy was the maniacal Ghost Pirate. I thought he looked pretty cool, and I enjoyed when he made throat slitting gestures to Scooby and Shaggy. The whole – cook me dinner – scene was fairly funny as well.

I also enjoyed the lore of skull island and the creepy skull they had inside.

While the bad guy’s scheme in this was clever, and there’s a lot to love about this episode, I don’t feel that Red Beard or the Pirate Ghost Ship setting are used to their full potential to make my top 10.

Until next, Stay Spooky.