Which Witch is Which is lucky episode number 13 of the first season of Scooby-Doo, and certainly helped me out with my spelling & grammar as a child due to the title.

This episode came out on December 6, 1969 and sees the gang lost in some swampland on a fishing trip after Freddy takes a shortcut. While stopping to ask for directions, they run into a zombie, and shortly after they run into a witch.

This episode is a fan favourite among many, and the voodoo elements along with the zombie design were seen later in Mamba Wamba and the Voodoo Hoodoo. The sheriff in this one also resembles the sheriff we saw in What a Night for a Knight, which is unusual as normally we are given a different sheriff in these earlier episodes.

Does this episode still hold up? Or has the witch in this episode put a hex on our nostalgia? Let’s find out.

Which Witch is Which – Episode Review

The episode begins with a Zombie padding a boat through some deserted swampland at night. Unaware of his presence, the gang, who are lost on shortcut Freddy has taken, complain about an unsuccessful fishing trip.

Worried that they’ll get even more lost, Freddy stops to ask for directions from a man on the road. Shaggy pokes his head out the window to ask, but soon realizes the man he is talking to is a Zombie. 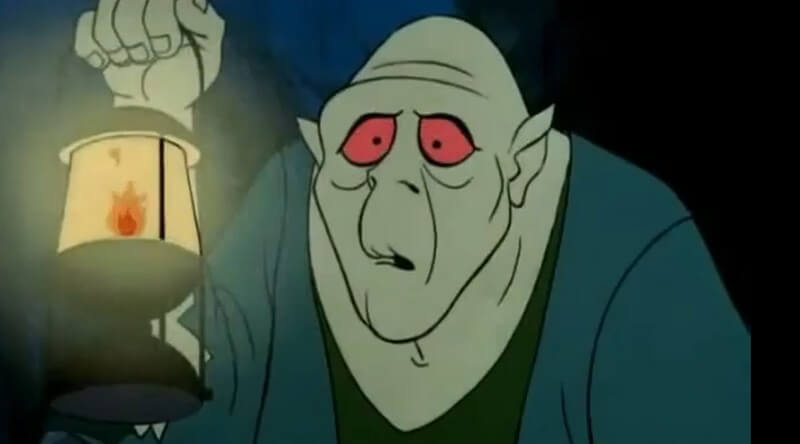 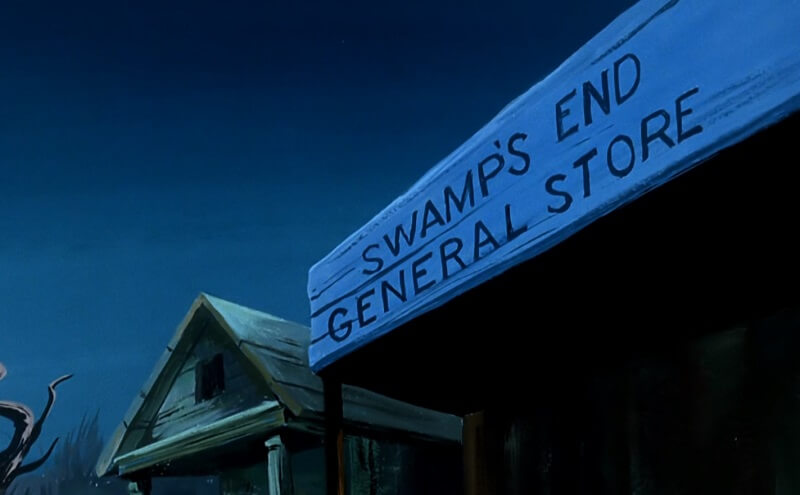 There, inside a bait and tackle shop they meet Zeke who tells the the woes of the Zombie, along with the Witch. The Witch showed up six months ago and summoned the zombie from a spell. Ever since then, nobody has dared to enter the swamp, and everyone but Zeke and his friend Zeb have left the town. 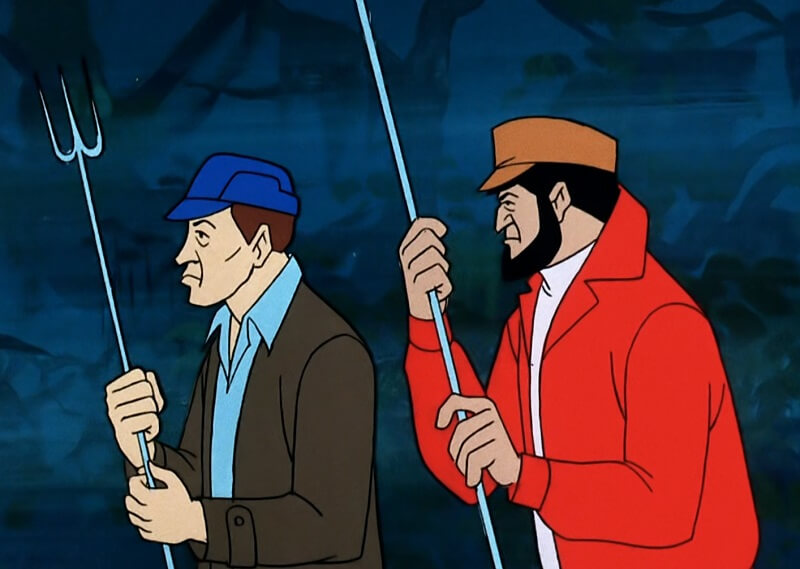 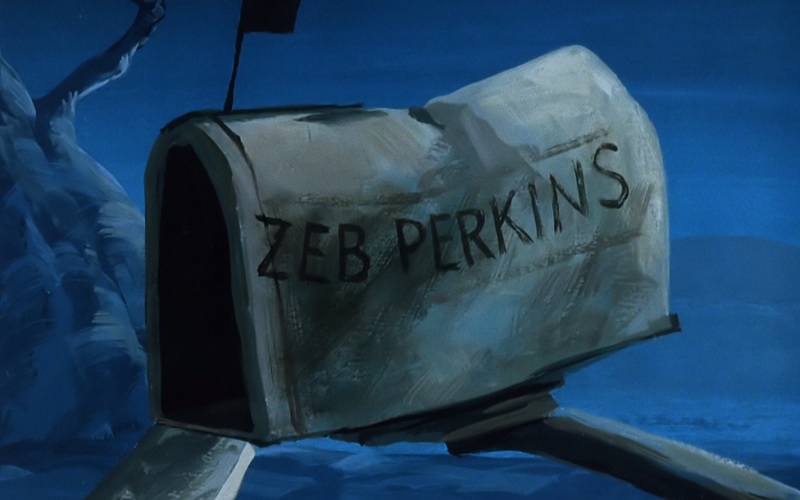 Velma thinks the whole story is nonsense, and Freddy sends Shaggy and Scooby to Zeb Perkins’ cabin to find out more. At the cobwebbed filled cabin Shaggy finds a voodoo doll of Zeb and returns it to the rest of the gang. 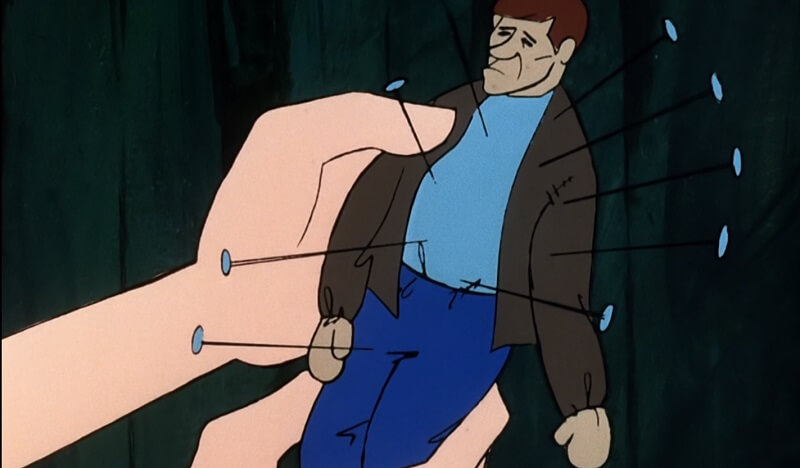 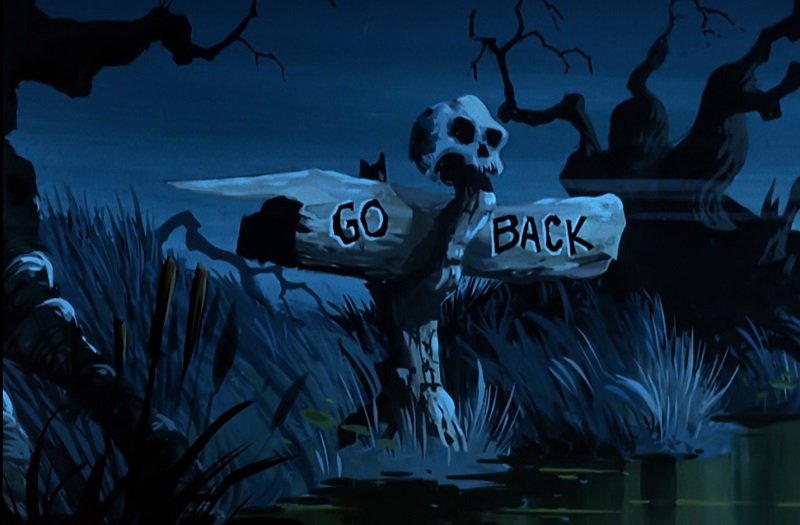 Seeing some warning signs to sway them off a swamp passage, they follow a trail to a Witch’s Shack where they see four voodoo dolls of everyone but Scooby. As a side note, I wish someone would make these into toys, as I’d buy them. 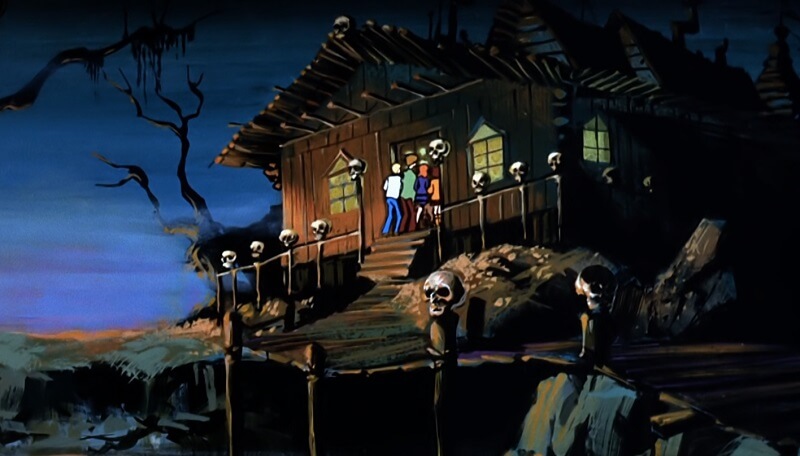 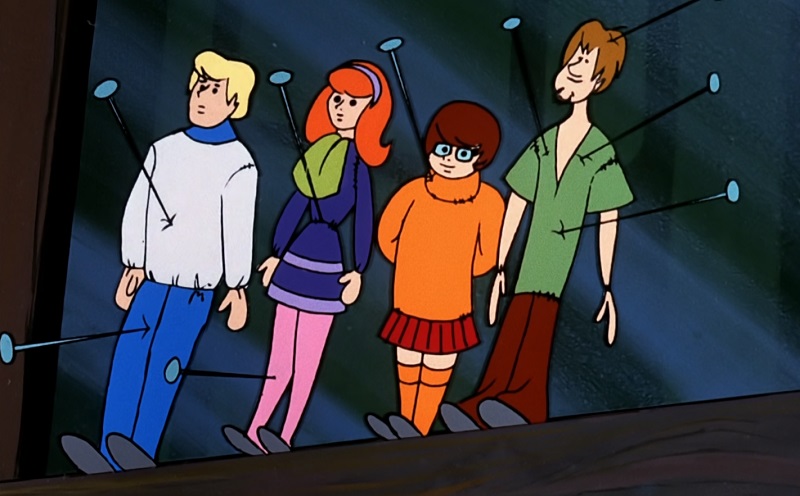 Inside the shack, the witch appears and casts a hex on Daphne who disappears. Cackling, the witch follows suite and vanishes herself. Freddy and Velma discover a manually activated trap door that Daphne had been standing on, and they set off to see if they can find her. 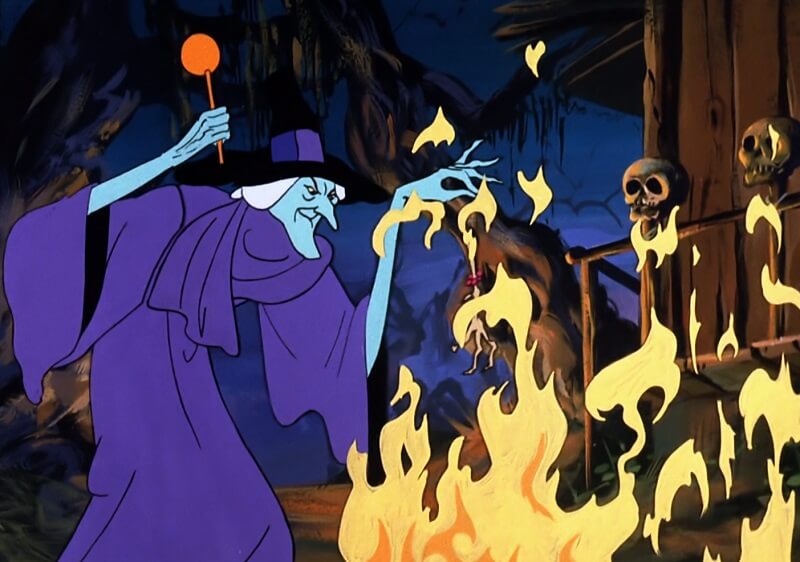 Following some footprints underneath the trap door they are lead to an abandoned riverboat. Outside the boat they see the zombie’s boat with a pole that has a shiny new metal tip on it. On the river boat, the gang split up, and it doesn’t take long for Scooby and Shaggy to run into the Zombie who is hiding in a deck box. 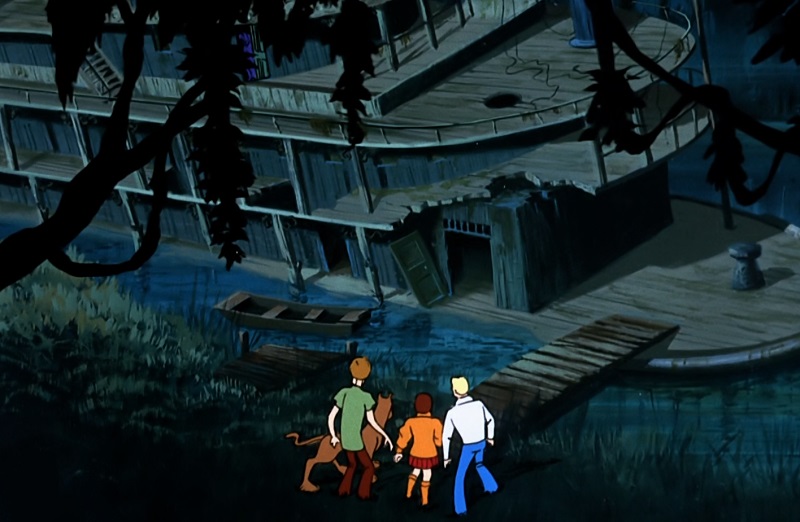 The zombie chases Scooby and Shaggy until they successfully lose him with their typical costume games. Elsewhere, Freddy and Velma find Daphne locked inside a secret room, along with a Winch, power tools and a cutting torch.

Velma declares she thinks she understands what’s going on, and just like magic, the witch appears and flies at them. Dodging her, the three jump down an old coal chute.

Scooby and Shaggy once again run into the zombie and disguise themselves as the witch, but the ploy doesn’t work and the Zombie gets his gruesome hands on Scooby. Shaggy tosses a Scooby snack at Scooby giving him some courage to smack the Zombie and shake free.

As they run down the deck of the river boat, the Witch appears and the two are trapped. Shaggy snag’s the witch’s broom jumps off the boat and tries to fly away, but falls down into an air boat. Freddy, Velma and Daphne spot the duo on the boat and the entire gang use it to escape.

Before they can get too far, however, the witch, who is floating in the air tries to stop them. The boat rams into the witch, where they discover the witch is just a dummy using a hot air balloon. 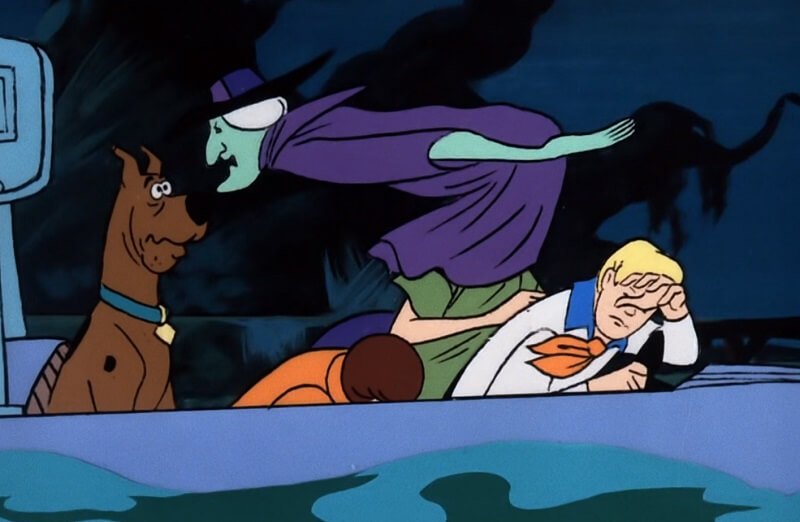 During their panic, Freddy somehow managed to get the throttle stuck, so Scooby tosses an anchor out to slow them down. The anchor does the job, after it latches onto an armoured truck, which it brings up to the surface of the swamp.

Using a winch, Freddy brings the armoured truck on to land and they find it full of sacks of money. Realizing the Zombie and Witch were searching for the truck, they devise a plan to trap them. 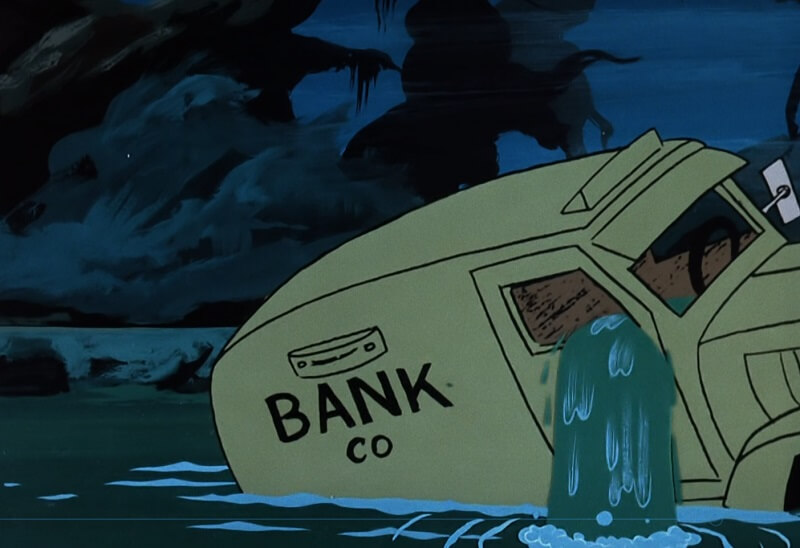 Naturally the trap doesn’t go according to plan, but in the end, the Zombie and Witch are caught. After calling the police, they unmask them, who are Zeb as the witch and Zeke as the Zombie. 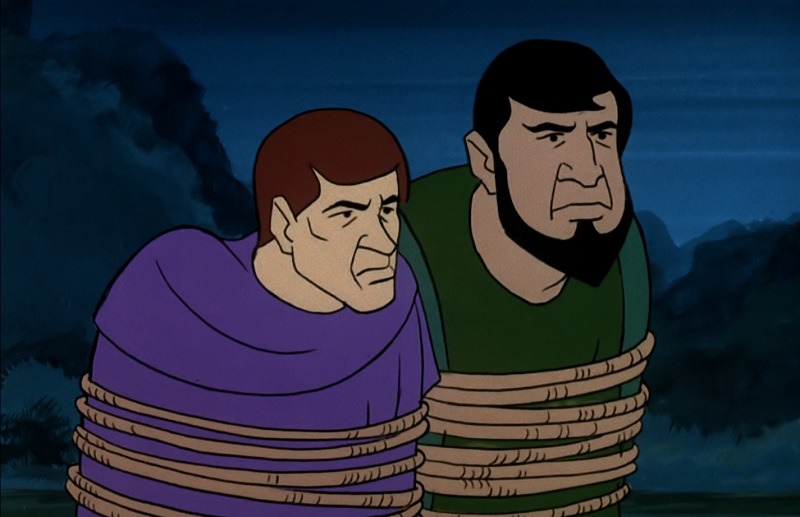 The armoured car had been missing for years when Zeb and Zeke originally stole it. They wanted any interest in the missing car to die down before they went searching for it. Wanting some privacy, they used the witch and zombie disguises to scare everyone away.

The metal pole was to help locate the car as they forgot where it was, as it would create a metallic ping when it hit the armoured truck.

They also used smoke screen pellets to help the witch appear and disappear.

The sheriff hauls the two off to jail, and the gang drive off in search of a new mystery.

First off, this is the classic Scooby-Doo that I love. All the tropes are here. The gang are lost in the mystery machine and come across a bad guy, things seem fishy, there’s some light hearted comedy, and some spooky settings, and Danger Prone Daphne gets kidnapped.

This isn’t a perfect episode for me, just because the Zombie isn’t all that exciting. Compared to the Space Kook, or the Green Ghosts we recently saw, the Zombie doesn’t measure up.

The Witch is a bit better, but nothing as creepy as the witch in ‘Too Switch a Witch’. Part of me likes how they incorporated the voodoo dolls in, but at the same time, this classic style of witch doesn’t really equate with voodoo.

We see some good set pieces with this one, like the abandoned town, Jeb’s cabin, the Witch’s shack and the dilapidated riverboat, so that’s all cool. The plot behind this one, and the motives of the bad guys is top notch as well.

To Switch a Witch is a strong Scooby-Doo episode, and I think anyone new to the franchise would enjoy this one.

Well, that wraps up another episode. Join me next week when I will be hitting the high seas and reviewing ‘Go Away Ghost Ship’. I will only be reviewing two more episodes this year, and in 2021 I will return with more Scooby-Doo Reviews.

Until next week, Stay Spooky!