Scooby-Doo and a Mummy Too is episode 12 of Scooby Doo Where are You and originally aired on Nov 29, 1969.

The episode sees the gang caught up in an ancient Mummy’s curse on a university campus where people are being turned into stone.

This wasn’t an episode I remembered watching much as a kid, so I wasn’t too excited to review this one. I always did enjoy Mummies, and thought the ancient lore behind them was creepy so I did approach this one with an open mind.

Is the episode any good, or is it the weakest bunch of the first season? Let’s find out!

Scooby-Doo and a Mummy Too – Episode Review

The episode begins on a University Campus in front of the building for the Department of Archeology. Inside, we meet the Professor and Dr. Najib, along with the mummified corpse of Ankha.

The gang are informed that Ankha was once the most feared ruler of Ancient Egypt. How ancient? Well over 3000 years ago. Thanks to Dr. Najib, the mummy completes the replica of Ankha’s tomb. Dr. Najib is worried, however, as a curse may have followed the mummy.

Ankha vowed if he was ever removed from his tomb that he would come back to life and turn those responsible into stone. Dr. Najib sees himself out, and the gang stay back to help the Professor out. 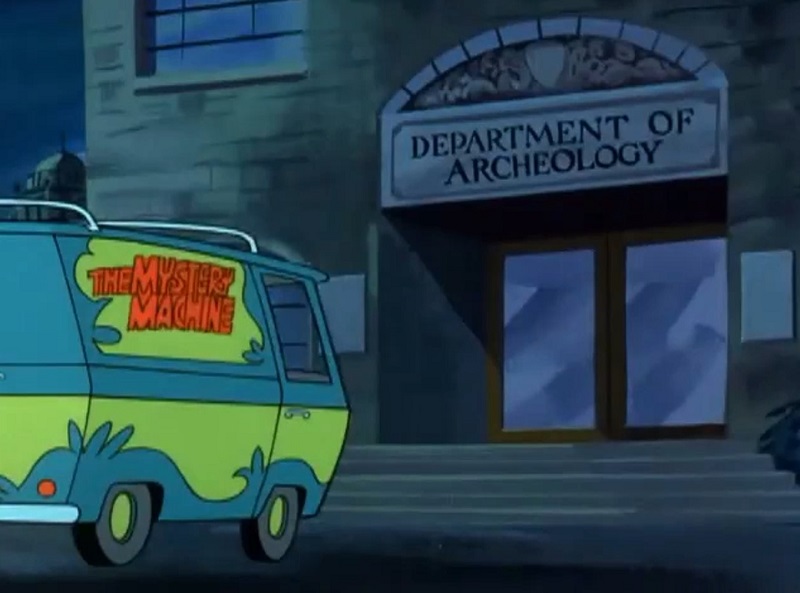 Shaggy enquires about a coin with a scarab on it, and the Professor tells him that it’s part of an ancient mystery he hasn’t been able to solve yet. Before we learn any more about the coin, the Professor sends the gang downtown to get some sandwiches.

Moments after the gang leave, the Professor is studying at his desk where he hears the sound of breaking glass. Getting up to inspect the noise he sees a silhouette of a bandaged man walking past his office door. In the hallway the glass entrance door has been smashed, and the tomb of the Mummy is empty. The Mummy has vanished.

Anyway, the whole order comes to a $1.50 (which works out to be 25 cents a sandwich) and Shaggy goes to pay for the order, but pulls out the Egyptian coin. Slightly embarrassed, the gang return to the department of Archeology with the sandwiches and the coin.

Inside the professor’s office, the lights are off. When Velma turns on the lights, they see that the Professor has been turned into stone and they realize the Mummy is alive and well.

Inspecting the Mummy case, they confirm it is empty. They also see that the glass door he escaped out of has the shattered glass on the inside of the door, meaning, the glass door broke with someone coming inside the building, not leaving.

The gang split up with Velma, Scooby and Shaggy going one way, and Daphne and Freddy going in another direction. Shaggy is the first to run into the Mummy, who has been hiding in a janitor closet.

Shaggy locks the mummy in the closet long enough so they can run away, however, the Mummy breaks out and catches up in the Egyptian display. Here Velma disguises herself as Cleopatra, while Scooby hides in some urns. Their charade doesn’t last long and they are confronted by the mummy who asks for the coin.

Scooby slams down a box of Scooby Snacks and distracts the mummy long enough so they can escape.

Outside, Daphne and Freddy spot footprints and follow them. The footprints disappear in an area where they are building an addition to the gym. Outside is also Dr. Najib’s car where we find him turned into stone as well.

Velma finds a shred of the tape the mummy was wrapped up in, and feels as if it is not 3000 years old. So Scooby, Velma and Shaggy head off to the school lab to test it. Before she can get her results, the Mummy re-appears and Velma creates a diversion so they can escape. 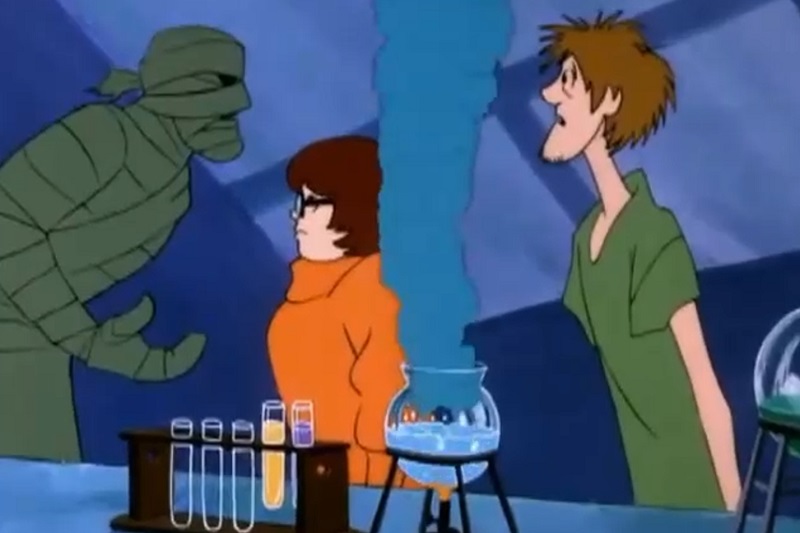 Leaving the lab, Shaggy and Velma meet up with Freddy and Daphne, however, Scooby is missing and must have been nabbed by the Mummy.

Outside Shaggy discovers that Scooby has been turned into stone. There’s a nearby shed, and Scooby emerges out of a hole he has dug as Shaggy mourns his loss.

Happy to have retrieved Scooby, the gang go back to investigate more about the mummy. In a book the Professor was researching, Velma exclaims that Ankha, the mummy, was the richest ruler of Egypt. She also spots a statue that has the same scarab image as the coin Shaggy has.

The mummy bursts in, so the entire gang take off to the wood shop on the second floor. Danger prone Daphne activates a power saw that cuts a hole in the ground which sends them to the school’s Olympic pool.

In a fit of rage, the mummy throws the power saw, still plugged in, at them. Fortunately the gang are on the wooden flooring that was cut out from above and aren’t electrocuted, but the power saw does give them a scary chase.

Resting on the pool’s change room benches, Shaggy sits on the Mummy’s lap and Shaggy and Scooby separate from the gang as another chase takes place. Our duo run into an area where they discover bags of quick drying mold cement along with molds for statues.

Realizing they’ve found out how the stone statues were made, the Mummy by sealing the entranceway up brick by brick. Inside the shed, they find the professor in a canvas bag. Rather then letting him go Shaggy keeps him tied up and tells him that they’ll be right back.

Using an electric power mower, Shaggy smashes through the shed wall and they crash into the gymnasium. Scooby is riding the powermower, and it crashes into the mummy, and they bounce across a series of gym equipment until the Mummy becomes entangled in a basketball net.

Removing the bandages, they discover that the mummy is Dr. Najib. 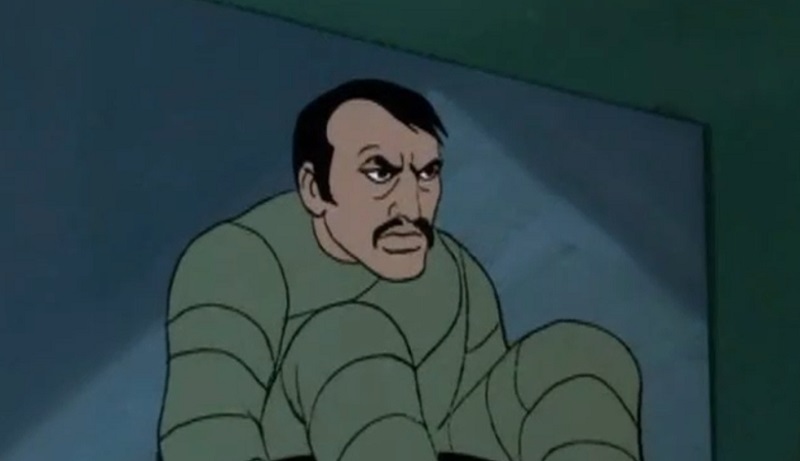 The episode ends with the Professor explaining that Dr. Najib knew the secret of the coin but when he broke into steal it, the Professor surprised him so he kidnapped him. He also realized the gang had the coin when he couldn’t find it in the display, so he waited for them to come back.

Freddy then solves the coin puzzle on the hippo statue and unlocks a huge diamond scarab worth a fortune. Scooby also finds the real mummy tucked away between two plants. Oddly, this mummy has a zombified face, whereas the mummy we saw at the start of the episode didn’t.

With another mystery solved the episode wraps up with Scooby giving his famous tagline.

Going in I was thinking this would be a weaker episode, but, this episode charmed the pants off me. The mummy isn’t particularly scary, but I still think he looks cool, and a creepy school campus at night makes for some interesting set pieces. The fact that the campus was under construction was a nice tie in as to where Dr. Najib obtained all the concrete for his statues.

I enjoyed how Shaggy sat on the Mummy’s lap, and the scene where Shaggy puts the Professor’s gag back in his mouth and says he’ll be right back was hilarious.

This is an episode I never watched a lot of when I was a kid which might explain which is why I may have appreciated it a lit more as an adult.

Next week we will be covering Which Witch is Which, until then Stay Spooky.