Hassle in the Castle is the third episode of Scooby-Doo, Where Are You! and originally aired on September 27, 1969.  This episode sees the gang getting lost in a fog while out boating. From here, they end up on Haunted Isle, where they meet a spooky phantom haunting an abandoned castle.

The episode begins with a spooky ghost in a castle tower looking out upon the ocean with a telescope.

In his telescope, the Phantom sees the gang out boating, and we cut to the boat where Daphne comments on how spooky the atmosphere is due to the fog.  Velma gives the gang a brief science lesson on how ocean fog forms.  Meanwhile, Shaggy is enjoying a ‘Super Shaggy Sandwich’, which consists of marshmallows, sardines and fudge.

Freddy accidentally crashes the boat on Haunted Isle, and Freddy decides to head to the old Vasquez Castle, where they might be able to find help.  While wandering the beach, Scooby finds an old map, with a warning on the back for them to leave.

Never ones to turn away from danger, the gang forge on towards Vasquez castle, which we learn is an old pirate castle.

The old castle is deserted and dilapidated from the elements.  Memories of its past remain inside, such as a suit of armour, furniture and a painting of Vasquez the pirate.  Freddy explains that Vasquez sailed the seas in 1612, and used the castle as a hideout. 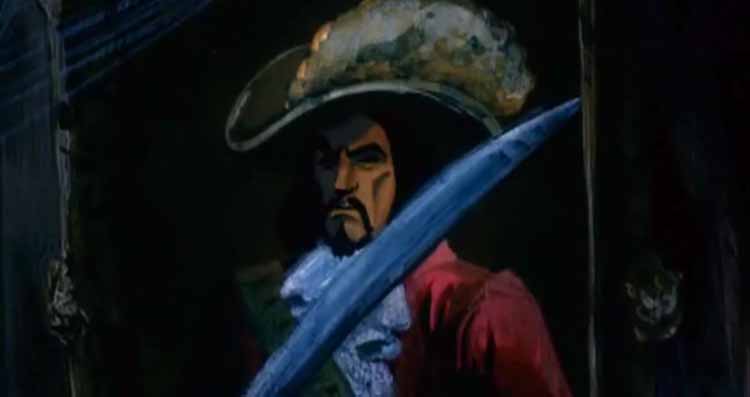 Velma proclaims she read that old castles tended to be loaded with old traps, and on cue, danger prone Daphne falls through a trap separating her from the gang.  We then hear the crazy cackle of the Phantom, which sends Freddy, Velma, Scooby and Shaggy off running.

We learn that Daphne has fallen safely in an inner sanctum, and through a stroke of luck, she unknowingly escapes the reach of a phantom hand reaching out for her. 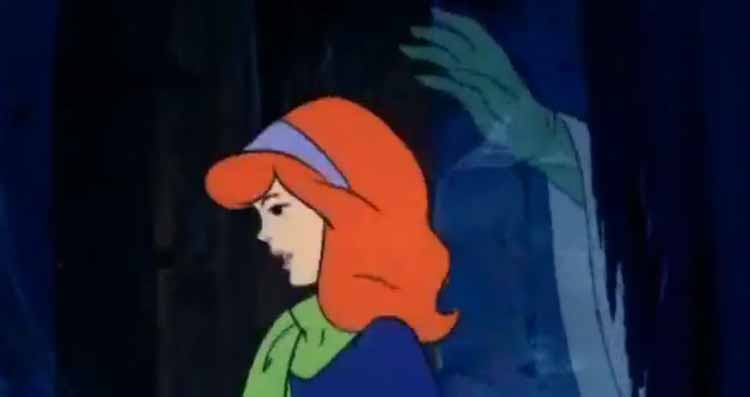 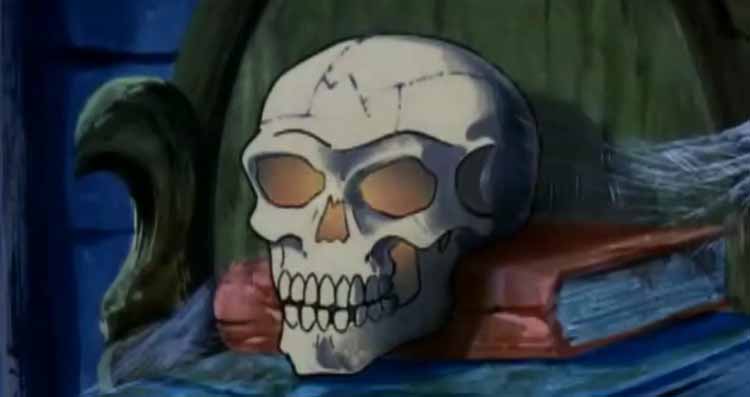 After being spooked by a floating ham sandwich, and an animated suit of armour, Scooby and Shaggy meet up with Daphne and eventually Freddy and Velma.  Here they see the Phantom for the very first time where the Phantom warns them to leave Haunted Isle and to never return.

Freddy and the gang charge after the Phantom to try and catch them, but the ghost phases through a concrete wall.  Velma tells everyone that there is a very logical explanation for all of this, in that the place is haunted.

Daphne finds the episode’s first clue, a giant key with the inscription – Second Passage of the Old Bell.  Since there is no bell in the castle, Velma concludes that passage must refer to a passage in a book, so the gang head off to the Castle library. 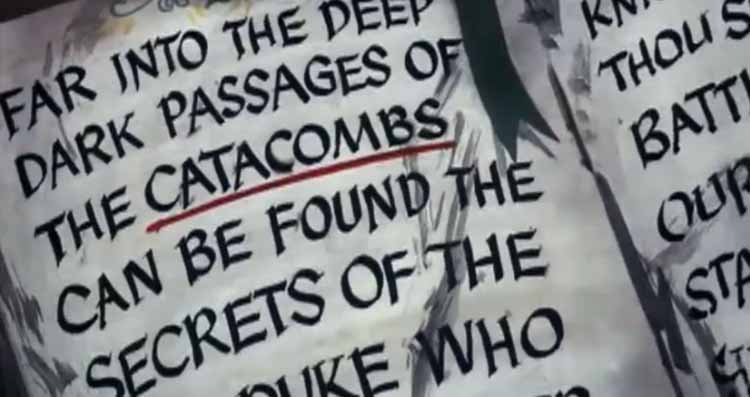 In the library, they find the book called ‘The Old Bell’, and discover that the word catacombs is underlined.  From there, they figure out the key must be used to open the catacombs, so they head off to the basement.

The key works and the gang find a room full of magic trick props, such as a saw-him-in-two box, levitating tables, a top hat, and vanishing cabinetry, among many other things.  At this point, Velma has the mystery solved.

The Phantom cackles and makes another appearance and chases the gang around the castle.  In the chase scene, we see the gang interact with several magical props, like a magic carpet, and a saw-him-in-two-box.

When the chase is finally over, Freddy plans his trap, using a suit of armour, a crossbow, a cannonball, and an old spring, along with Scooby doing his best John Wayne imitation.  Like most episodes, the trap has comic results, but they end up catching the Phantom in the end.  At this point, the police also show up, as they spotted Freddy’s marooned boat on the beach.

Unmasking the Phantom, it is revealed to be Bluestone the Great, an ex-magician who is wanted in six states.  Bluestone came to Haunted Isle to find the fabled treasure of Vasquez the pirate.  Since there are so many treasure hunters out there, Bluestone used his scary magic tricks to keep the fortune hunters away.  One of his biggest assets was a special film projector and trick mirrors, to which he could have his phantom phase through walls. 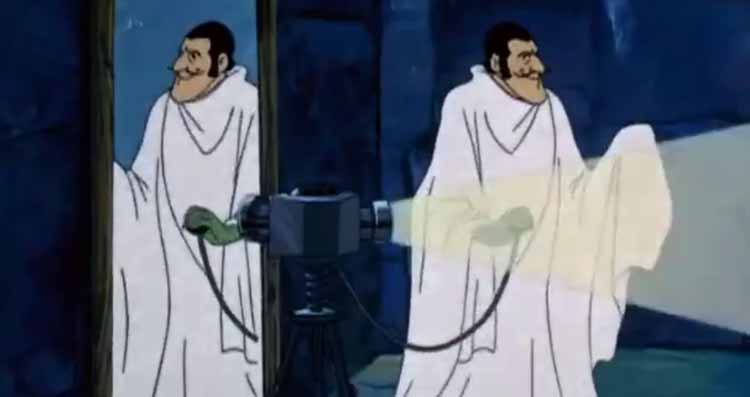 With another mystery solved, Scooby thinks he has found the treasure but instead finds an irritated gopher.

I give this episode a 10 out of 10.  This is classic Scooby-Doo at its best, as we get a creepy villain with a wicked laugh and a spooky setting with Haunted Isle.  The old pirate castle is full of skulls, old paintings who’s eyes move, and old relics like suits of armour wielding massive axes, cannonballs, and pirate cutlasses.   The various magical props were genius as well and contributed to the fun of this episode.

This episode also showcases why Scooby is the biggest star of the show. Seeing him pit off in a mock showdown with the phantom was hilarious! Another star of this episode is the Score, I would love to own this on compact disc or vinyl.

Many of the scenes in this episode were used in the opening Scooby-Doo, Where are You! titles, such as the Phantom\’s arm reaching out for Daphne, the Laughing Skull, and a reaction shots of the gang’s individual faces.

If I had one complaint, it might be that the atmosphere is a touch too dark to see all these cool antiques crystal clear.  Otherwise, I was drooling over the fabulous background cells, such as Haunted Isle, or the exterior shots of Vasquez Castle.

In terms of history, this is the first episode not to feature the Mystery Machine, or for the gang to not meet any suspects.  We also get our first trap door, a trope we will see repeated often as the series progresses.

Anyway, until next time #StaySpooky

Which Witch Is Which?