A Clue for Scooby-Doo is the third episode of Scooby-Doo, Where Are You! and it originally aired on September 20th, 1969.  This episode features the Gang at Rocky Point Beach, where they run into the ghost of Captain Cutler, a sailor who died many years ago when his ship went down.  Captain Cutler, who is a ghost inhabiting a vintage diving suit, is now out for revenge!

The episode begins with some mysterious glowing footprints and a man in a vintage diving suit, covered in seaweed, walking into the ocean depths.

The Gang show up at Rocky Point Beach for a beach party, and Shaggy is super excited for some chocolate covered hot-dogs. While Freddy and Daphne dance to some groovy tunes and Shaggy roasts his hot dogs over an open flame, Scooby encounters the Ghost of Captain Cutler while out surfing. 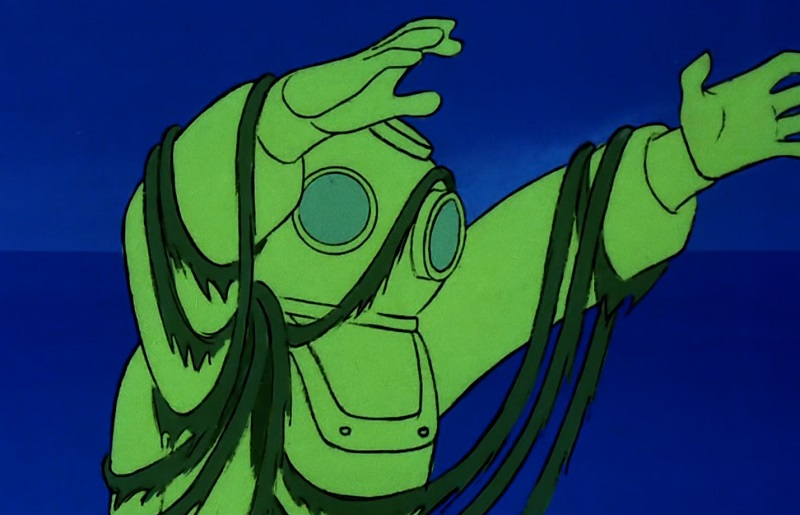 Making a mad dash back to shore, Scooby tries his best to explain to the Gang what he just saw. He doesn’t have to talk much further as the Gang quickly sees Captain Cutler rising from the surf. Just before he reaches the shore, however, he vanishes just as quick as he appeared. 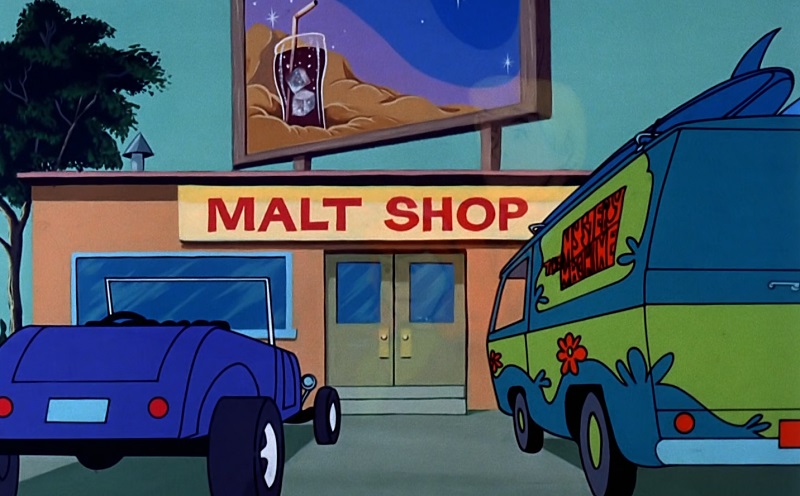 Meanwhile, at the Malt Shop, the Gang read a newspaper article about another boat mysteriously disappearing. The article also states that local beach hermit, Ebenezer Shark, says that the ghostly Captain Cutler is behind the missing boat spree. 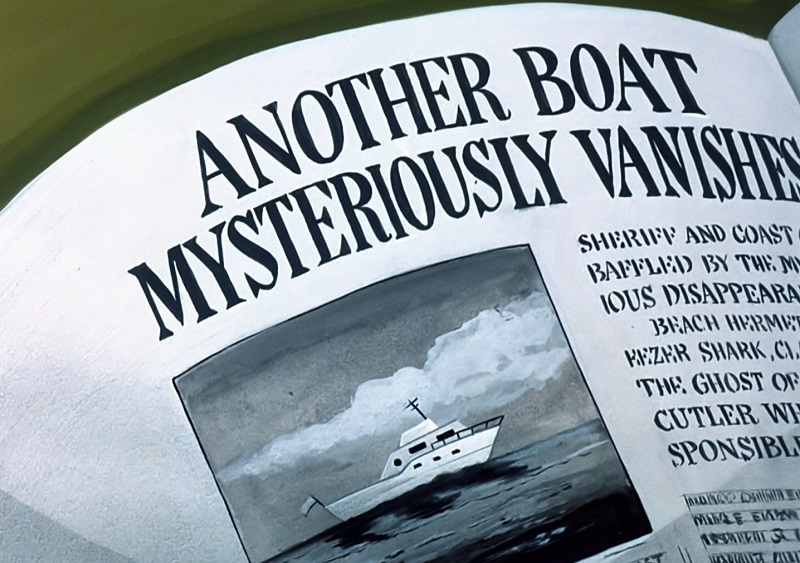 The Gang decides to visit Ebenezer Shark, where he explains that Captain Cutler was in a boat accident that took his life when his boat collided with a fancy yacht on a foggy night.  The shipwreck sunk him into the Graveyard of Ships, and now, his spirit is back for revenge and stealing boats from the marina.  In fact, Ebenezer has seen his glowing form steal the ships with his own two eyes.  Ebenezer also lives on an old shipwreck on the beach.  Pretty cool home if you ask me.  Sign me up!

Velma thinks there is something fishy about Ebenezer, as Scooby finds a diving suit similar to Captain Cutler’s in one of his closets.  Regardless, Shaggy, Velma and Scooby take Ebenezer\’s advice and visit Captain Cutler’s wife at the old lighthouse for further answers.  Meanwhile, Freddy and Daphne stay back at the beach to keep an eye on Ebenezer Shark.

At the creepy lighthouse, Velma, Shaggy and Scooby enter, and discover that the wife of Captain Cutler practices witchcraft from all the spooky books, potions, and items (like canned Hyena Laughs) that decorate her home.  Velma also discovers a book called Witchcraft Made Easy, which I assume if it was still published, would make oodles of money on Amazon.com.

Eventually, Mrs. Cutler makes an appearance and explains that it was her and her witchcraft that brought Captain Cutler back from his watery grave.  Had she known he’d be out for revenge, she would have left him under the sea. We also learn that before Captain Cutler\’s ship sank, he declared that he would be back! 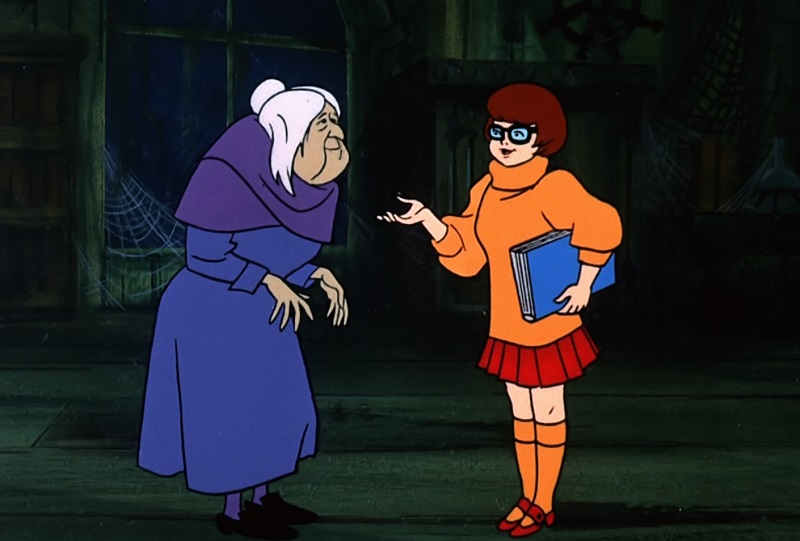 Leaving the lighthouse, Velma, Shaggy, and Scooby find another clue, some glowing seaweed that is moving across the beach on its own. Following it to a drainpipe, they discover the seaweed was covering a mouse (after feeding Scooby a Scooby-Snack to brave his way into the drainpipe). Taking a sample of the seaweed, they head back to where Freddy and Daphne are.

Consulting a biology textbook, Velma discovers that the glowing seaweed is a phosphorus glowing plant that grows only in the area known as The Graveyard of Ships! 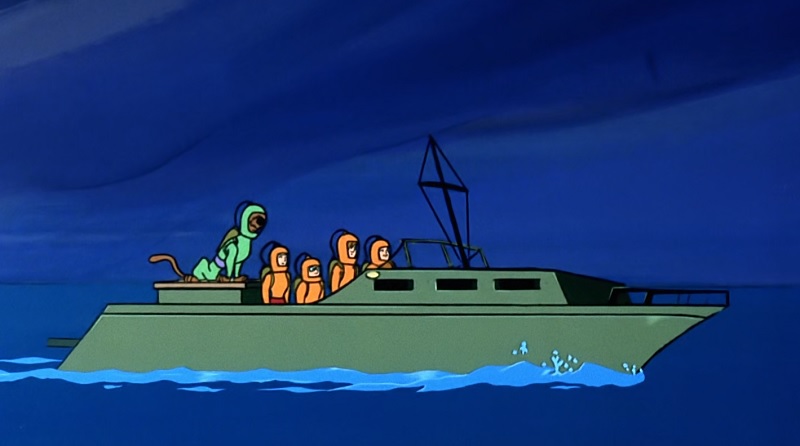 Donning their Scuba gear, the gang head out to the shipwreck spot and discover a Yacht driving itself, with nobody on board. Following the yacht, they end up at a cove, where the mysterious boat vanishes into thin air.

Freddy suggests they go onward and downward into the Graveyard of Ships, so the gang return to the shipwreck site and swim down into the sea to look for clues.

Shaggy and Scooby see Captain Cutler running away, and with some quick thinking, Scooby knocks the Captain down.  In the process, Scooby gets separated from Shaggy and finds an underwater shed full of Scuba tanks.  Returning to Shaggy, the two of them evade Captain Cutler hunting them down across the watery shipwreck graveyard.

Eventually, they end up with the rest of the Gang where Scooby tells them about the scuba tanks.  Leading the rest of the Gang to the clue, Freddy also discovers glowing footprints, to which they decide to follow.  The footprints lead them to a dead-end at the side of a cliff, but in true Scooby-Doo fashion, Shaggy accidentally finds a button that opens a secret passage.

Inside the secret entrance, they discover the vanishing yacht they saw earlier, along with several others.  Freddy deduces that they are being painted over in different colours and then sold. They also discover that the yacht they saw disappear is tied to a mini-submarine, which is how it was dragged to this spot.

Making a trap for the ghost, it obviously doesn’t go off as planned, however, like always, they end up capturing their villain.  Unmasking the ghost of Captain Cutler, the Gang has no clue who he is.  That is until Shaggy puts some seaweed on his face to display that Captain Cutler is actually Captain Cutler! 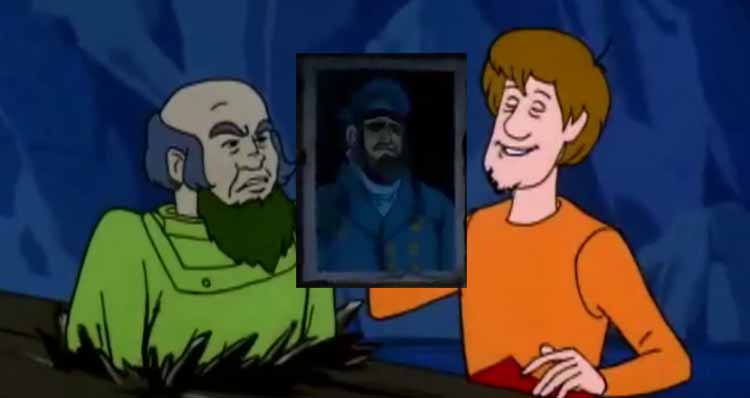 Cutler and his wife spread the phoney rumour that he had died, along with the ghost story of him returning from the dead so that they could steal expensive yachts from the marina.  In the secret cove, they’d repaint them and then sell them.

With another mystery solved, the gang head back to Malt Shop to enjoy some great food and drink.

I give this episode a 10 out of 10.  This is old-school Scooby at its best, and an episode of many firsts.  For one, we get our first appearance of glowing footprints.  We also get a nice shot of the Gang in the Malt Shop, the Gang partying it up on the beach, and Velma doing research in her biology textbook.  It’s also cool that nearly half of this episode takes place underwater.

The ghost of Captain Cutler has always haunted me.  Especially that image of the skeleton donning the scuba suit underneath the water.  This phenomenon does happen in real life, and if you are old enough to handle the gruesome subject matter, I suggest you watch The Lake That Never Gives Up Her Dead episode by Ask a Mortician on YouTube.

Sure, the animation is a bit choppy with this one, and the Ghost of Captain Cutler doesn’t have that much to do than growl and stomp around.  However, for being episode #2, the episode captures and sets the next 50 years of dynamics between the Gang in stone, flawlessly.  Which is why, for me, this is a perfect 10.

Until next time, Stay Spooky!