The Ghost of the Bad Humor Man originally aired on December 11, 1976 and is the 15th episode of the Scooby Doo Show.

This is one of the most requested episodes for me to review, so I’m happy to finally review it.

Finally, when Mr. Grizzly the night watchman of the episode asks the gang if they need to call their parents, they claim to be out of their hometown.

Anyway, enough of my jibber jabber, let’s get one with the review.

The Ghost of the Bad Humor Man – Episode Review 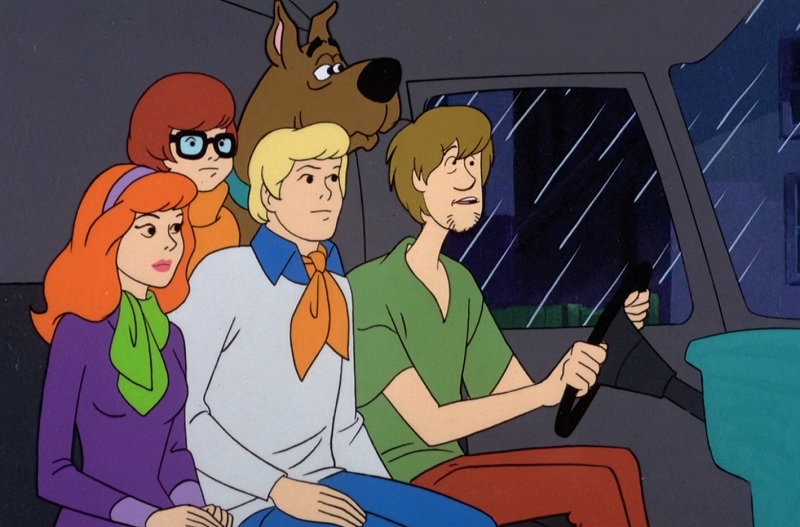 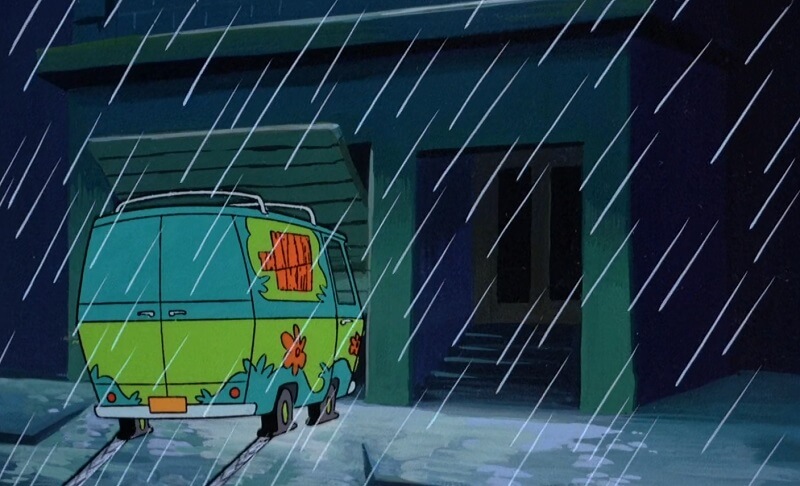 From a window above, a ghost looks down upon them. 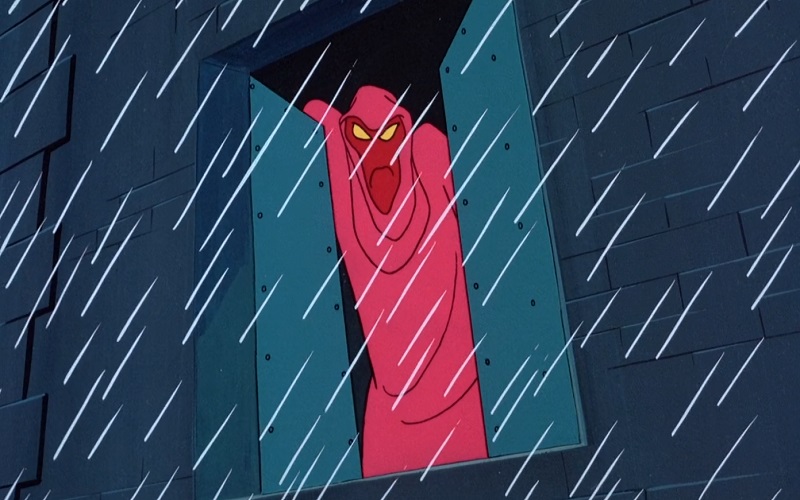 All four tires are blown on the Mystery Machine and there’s a strange amount of ice cream bars piled on to the road. Shaggy then realizes the slippery gobsickles must have caused him to slide into the factory building as he was only going 10 miles an hour at the time. 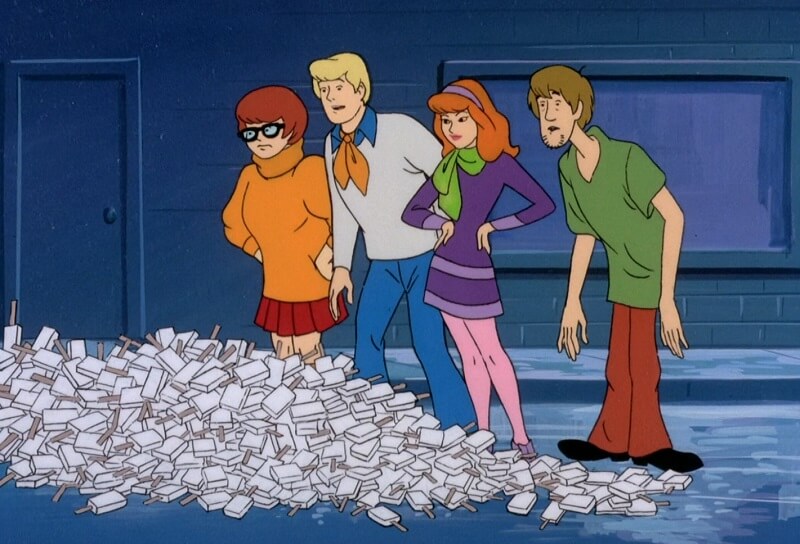 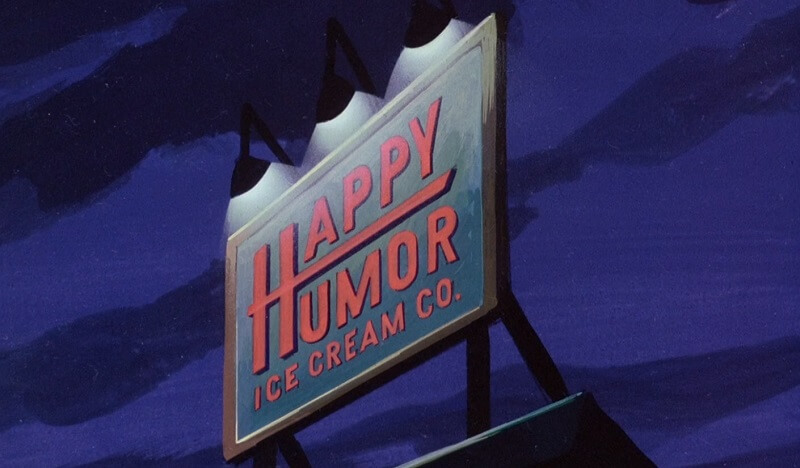 Freddy and the girls go into the building to ask to use their phone, while Shaggy and Scooby stay back to eat the ice cream. On the Mystery Machine’s radio, Shaggy hears a news report that 2 million dollars in cash have been robbed from an armoured car that has disappeared..

Shaggy and Scooby walk into the ice cream factory and claims he smells bacon and not ice cream. Following Scooby’s nose, they come to a room with a hot plate where bacon and eggs are sizzling.

Here they meet the night security guard named Mr. Grizzley who is a bit aloof, deaf and blind. The building owner mistakes them as factory workers.

Taking a ride on a golf cart the night security guard explains that everyone has quit due to the technicolour phantoms haunting the building that are red, white and brown. Shaggy then nicknames them the strawberry, vanilla and chocolate phantoms.

Velma picks up the phone to call for auto service, but instead she hears a message that says “You Are Doomed If You Do Not Depart these Grounds”

The Strawberry, Chocolate and Vanilla Phantoms then show up and give the gang a chase. Shaggy and the gang then run into the building owner who has a cast on his right foot. The owner says his silent alarm had gone off so he came to investigate.

Introducing himself as Avery Queen, the owner claims the Technicolour phantoms are ruining his business. The freezers were so overrun that the workers were dumping the ice cream in the streets and that’s how he broke his leg, when he stopped to clean up the mess.

In the ice cream storage room, Shaggy takes a bite out of an ice cream bar that is far too frozen. Meanwhile, the girls comfort Mr. Queen. After they leave to look for Scooby and Shaggy, Avery Queen walks away in a suspicious manner as he isn’t using his crutches.

In an underground garage, Velma, Daphne and Freddy spot dozens of unused Ice Cream Delivery trucks. A large crack in the ground has also formed by the weight of one of the ice cream trucks. Unfortunately, it’s locked, so they can’t investigate further. The Strawberry Phantom the shows up and takes chase where they end up locked in the ice cream freezer with Scooby and Shaggy. 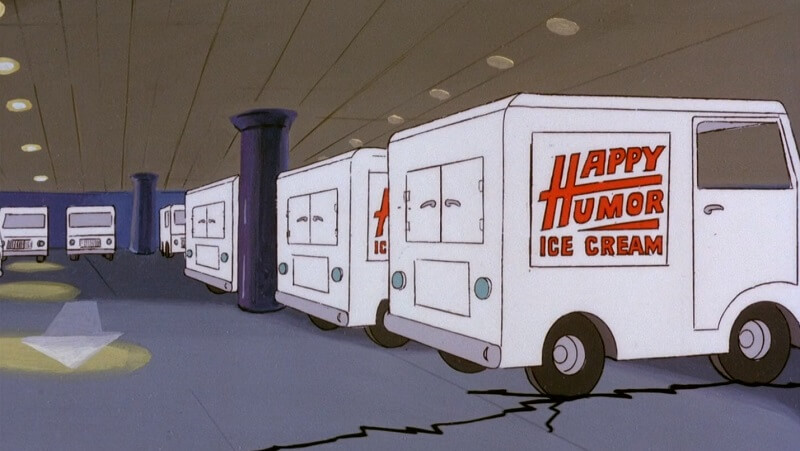 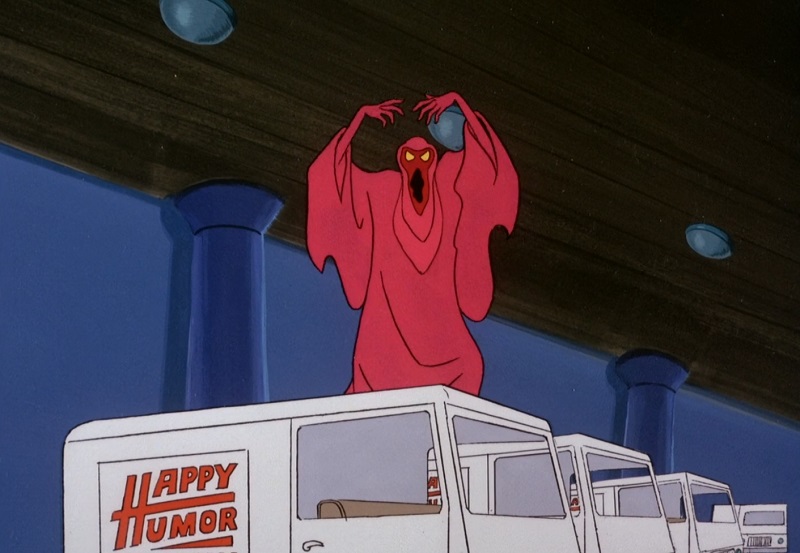 While in the ice cream freezer, Shaggy has found a fur coat that makes him look like a phantom which causes some amusing hijinks that leads him back outside the freezer where a small chase occurs. 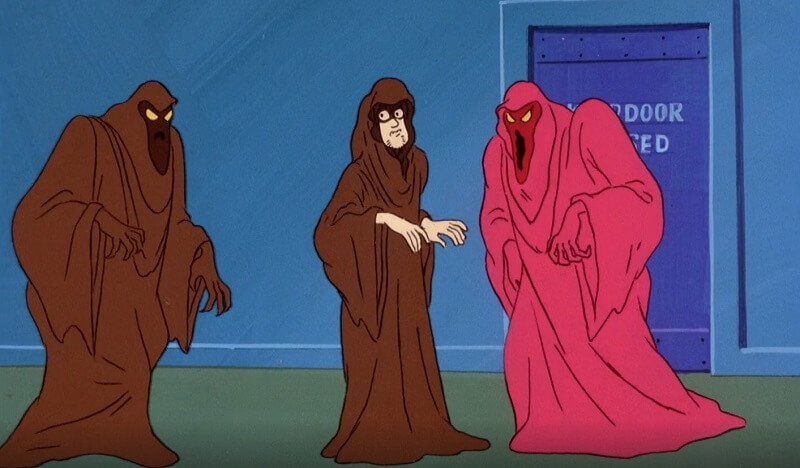 Shaggy eventually returns to the freezer to rescue Scooby and the gang.

The ghosts reappear and more chases take place. Freddy sets a trap using strawberry syrup, but instead catches Shaggy in his fur coat.

The gang then discover that Mr. Queen is missing without his crutches. Velma sees him running off out of the corner of her eye and is very suspicious. The gang also find buckets of white paint where they remember the trucks were all painted white.

Meanwhile Shaggy and Scooby have their own problems as they are stuck in a room with a leaky milk tank.

Returning to the garage, Velma finds out that the same truck that cracked the floor is freshly painted and built out of solid steel. 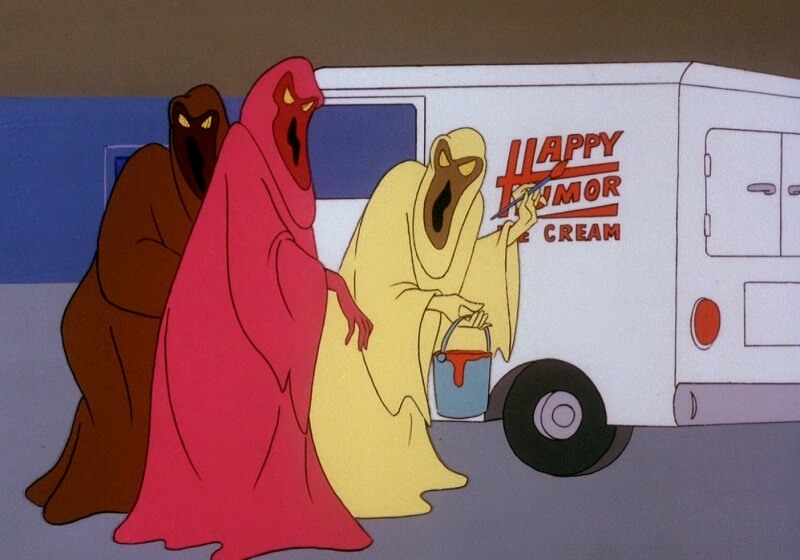 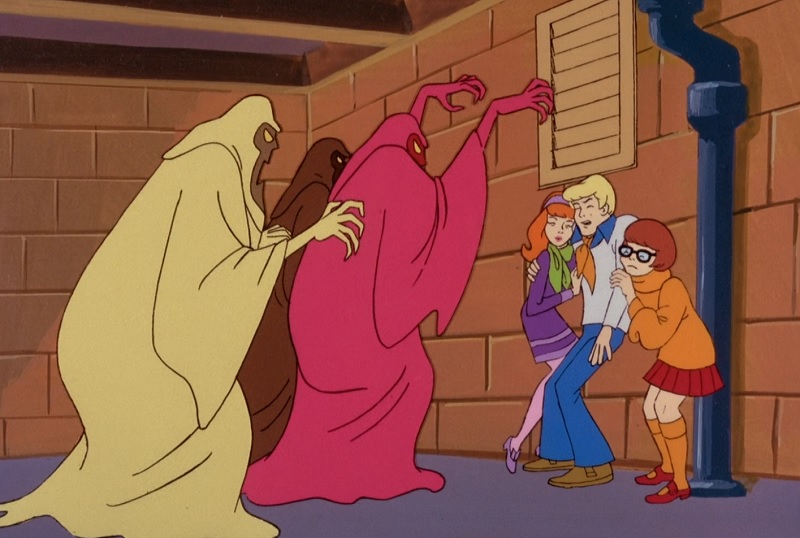 Our trio of ghosts then appear and make for another chase where they corner Freddy, Daphne and Velma. Fortunately Shaggy and Scooby’s leaky milk tank causes a waterfall of milk that knocks the ghosts down.

The three ghosts then hop into one of the Ice Cream trucks and try to drive off. Freddy stops them by shutting the garage door which they then crash into. Inside the back of the truck we see loads of cash fall out. Using two other trucks, the gang trap the trio by side blocking their vehicle doors. 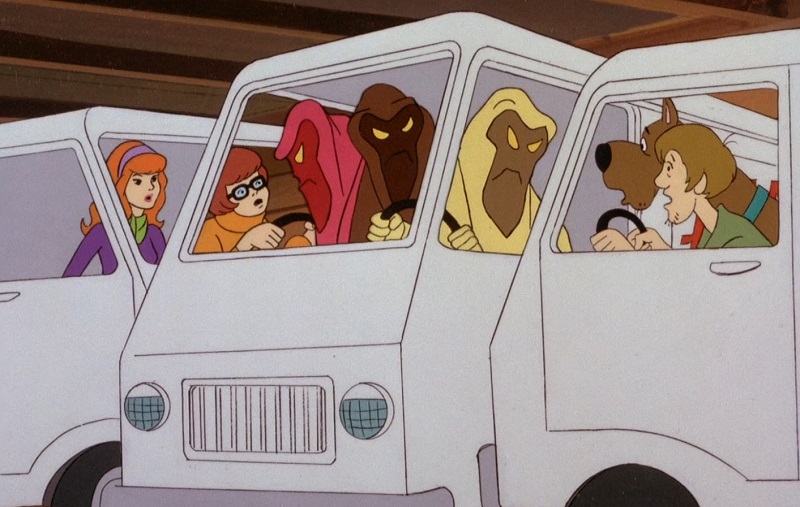 Unmasking the villains it’s revealed to be Mr. Grizzly and two random accomplices. The police officer reveals that Mr. Grizzly is really Sammy the Shrimp, the most clever highjacker in the country.

Mr. Queen then shows up and Shaggy accuses him of being in on everything and wearing a fake cast. Mr. Queen voluntarily breaks his cast and inside there are wads of cash. Mr. Queen states that it is his own money that he was hiding with the phantoms floating around.

Sammy the Shrimp had hijacked the armoured car then haunted the garage to scare everyone away where they could park the truck and disguise it until the heat was off.

I just love the look of the technicolour phantoms and while they are a bit of a rip-off of the phantom shadows, who cares? They look great! I only wish we got to spend more time with them as a lot of this episode is dedicated to gags.

This episode isn’t particularly spooky, however, it is a lot of fun. The ice cream factory made for a unique set piece, and I loved how we saw various rooms such as the freezer, garage, and other areas.

There are a lot of gags in this one, but they aren’t over the top silly, and they work with the environment. I particularly enjoyed how Shaggy was wearing a fur coat in this one and got to interact with the maniacal ghosts at one point.

The mystery was also interesting and they did a great job of having set up Mr. Queen, but for it to turn out to be Mr. Grizzley. I also enjoyed the befuddled Mr. Grizzly and found him a lot of fun at the start in how he mistook Velma for a young boy and Scooby as a woman.

I took off a half star as I wish the spooky factor was cranked up a notch, but otherwise, this is a fantastic episode.

Anyway, join me next week when I will be covering the Spirts of ‘76. After that all my reviews for Season One of the Scooby-Doo Show will be complete and I’ll do by ranking episode.

Until then, Stay Spooky!